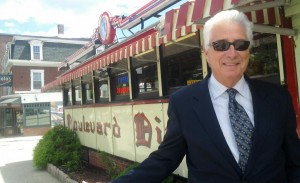 Yesterday, while hanging out at one of my fave Worcester eateries, the Boulevard Diner on Shrewsbury Street, whom do I bump into? The Italian Stallion (well, only half!) of Woo’s Department of Public Works and Parks –  Commissioner Bob Moylan.

Rose to Bob: You look so handsome! What a great suit! Let me take a picture!

Bob:  OK. In front of the Boulevard …

I remember seeing the makeshift shrine on Grafton Street about a year or two ago. I was driving up Dorchester Street, going to Building 19. I came to the end of the street, the intersection of Dorcester and Grafton streets, and there it was: the wreath, the cellophane hearts and flowers. I knew instantly: Some one had died there – in that exact spot.
I had read about the tragedy in the papers.

“God,” I said to myself. “What a horrible way to die – car speeding straight into a stone wall … .”

The driver, a young guy, had been at a party and decided to drive home drunk. Zooming down Dorchester Street, a long and hilly affair that seems to go on forever, he was too drunk to see the stop sign at the end of Dorchester, too drunk to notice the street had come to an end, too drunk to slow down … . And a young life came to a violent halt that night.

I was reminded of the incident for months because I’m always driving around the Grafton Street shopping plaza – for groceries, whatever, – and always drive up Dorchester Street to get there. For months, I always saw the shrine to that young man. For months family and friends maintained it, cleaned up and updated what was now hallowed ground.
You see that a lot with urban shrines – they are kept up beautifully. At Christmas there are wreaths tacked to the spot where victims exhaled their last breaths of air. On Valentine’s Day you see the heart-shaped candy boxes and pink stuffed animals adorning pictures of the deceased. Little statues of plaster or Paris angels bought at the Dollar Store.
Color in a sometimes drab world. Life in a sometimes deadly world.

When I see an urban shrine well maintained for months – and most of them are – I think: that person is not forgotten, the community has not forgotten him/her.

So many times poor people are forgotten by society or dismissed by the people around them. People with power or money who see poor folks as too noisy, too ignorant, too unattractive … . Whatever. I have seen/experienced it. You go to places and people talk over you and past you because they know you don’t have the best car or the best clothes or you’re too old or too young. And you can’t touch them.

But the shrines do touch people – they can touch an entire neighborhood – or even city.

And often times poor folks create a kind of church service at these sacred places. Maybe they can’t afford a flower-laden casket and the pomp and ceremony that you can buy at funeral homes. Sometimes bodies are even shipped to other states, in a way disappearing forever.

But with an urban shrine, people can exert some control. Plastic flowers from the Dollar Store can cascade down walls, golden-framed photos can rest on the sidewalk – out of the way and yet not too far away. So we don’t forget. A poem written by a friend. A placard with a place to write your name and goodbye … .

About a month ago, after the murder of a young guy in Crompton Park, I was driving down Quinsigamond Ave and noticed that a little shrine had popped up near the old field house there. Several people were gathered around the shrine, talking quietly, remembering the youth who had just been murdered … .

A bit of peace. A place to reflect on life … the evil of guns … what we can all do to make Worcester a better place.

Mourns in a way that is true, heart-felt. The shrines that mourners set up in playgrounds, parks, sidewalks are really churches – gatherings of people to pray, to be together to give each other strength and maybe ask for God’s help. Churches, in the truest sense.

People need churches, need to come together. It is a shame that DPW and Parks Head Robert Moylan has decided to desecrate urban shrines and the experiences they embody.

It is a shame that Moylan has decided – with the City Council’s blessing – to give inner-city folks 30 days to have their shrines up. And then: a DPW truck comes along and picks it all up – like so much refuse.

To be fair to Moylan, he said the City of Worcester would keep the personal affects, memorabilia for a bit of time.
So the mourners could pick up … pieces of their hearts at DPW headquarters – with the garbage trucks and plows and noise buzzing all around them.

This new rule is senseless and callous and needs to be repealed.

END_OF_DOCUMENT_TOKEN_TO_BE_REPLACED

We talk about keeping Worcester jobs local and strengthening our local economy. I have written about our DPW’s toxic nepotism problem.

It seems that when the City of Worcester isn’t giving municpal jobs to the same 200 or so connected families, they don’t care WHERE the city’s subcontractors come from. I saw these disconcerting sights last week:

At the Crompton Park pool in Green Island, with all the rebuilding etc, going on, a truck with a Connecticut license plate! Doing work at a Worcester job site! Then:Driving down Dewey Street – where the potholes are mini-craters (of course they are -they are in one of our poorest neighborhoods) – I see a LUDLOW (Mass.) company doing all the street repaving/repair work. LUDLOW! Next: Outside an Institute Road house, I see a Maine truck doing the asphalt repair.

All City of Worcester jobs that Mike O’Brien and DPW BobMoylan could have outsourced to Worcester companies! Believe me – they need the dough!!

Even if it means paying a teensy bit more money!

The WPSchools Stacey Dubois Luster, head of human resources for our public schools and an African American woman, must start hiring people of color as teachers in the Worcester Public Schools. Let’s send down recruiters to Spellman College, Howard College and Temple and all those great African American colleges.Let’s have our recruiters talk to young, bright, gifted and Black young men and women about teaching in our public schools. Several years ago the City of Worcester created a little part-time job – $15,000 a year – for a WPS teacher recruiter to help hire more minorities in our schools. After only a year (or less) the WorcesterCity Council, claiming poverty, killed the position. Then, several months later, the city council voted to double their paychecks. Now all these folks (except for MikeGermain, hwo has refused the raise – good job, Mike!) make almost $30,000 a year (each city councilor!).

This is why folks don’t bother voting any more.

How lovely to wake up this morning and be greated by a toxic voice mail message (which I have recorded in my cell phone) by (most likely) a City of Worcester employee who is pissed that I suggested that Bob Moylan, head of the city’s Department of Public Works and Parks Department -and the City of Worcester – advertise for City of Worcester job openings. I saw a great 1/4 page ad in The Banner, Boston’s African American newspaper, that very directly and simply sent out a call to ALL plumbers, welders, snow-plowers, etc – especially African American ones – to fill out job applications in order to do subcontracting work (plowing, plumbing, etc) for the City of Boston. The ad listed more than 30 jobs that people could apply for and told folks how to go about doing this: visiting a City of Boston Municipal Office and getting the application to fill out or going on-line to download and complete a job application. Also, a City of Boston phone number was listed, in case any one wanted more details/help. Mayor Tom Menino (I think) proudly placed his name at the bottom of the ad. He wanted all to see: We in Boston play fair – we want to open up the process/system to minorities. (Which I believe is happening. Go to Boston, Hartford or Springfield and just see how many minorites are teaching in their public schools, working in their City Halls or public libraries! Worcester is so far behind, it’s pathetic. No make that – We’re pathetic.)

But I digress. Contrast that Boston Banner newspaper ad, that paen to open government, to THE WORCESTER WAY – the nepotism golden ($$) brick road! – the road that is lined with the bodies of brothers and cousins and pals of DPW staffers (and let’s not start examining the WPS department). When have you ever seen an ad like the one I just described placed in the T & G or other papers in town – especially ones that are minority owned? END_OF_DOCUMENT_TOKEN_TO_BE_REPLACED

I will list just a few of the many jobs (blue collar) that were listed in the City of Boston’s (very large) ad. Remember, these are not full-time jobs but “projects” or seasonal work for Boston. But we are not talking tiddly winks here, either – we are talking thousands, sometimes hundreds of thousands of dollars to be made. END_OF_DOCUMENT_TOKEN_TO_BE_REPLACED