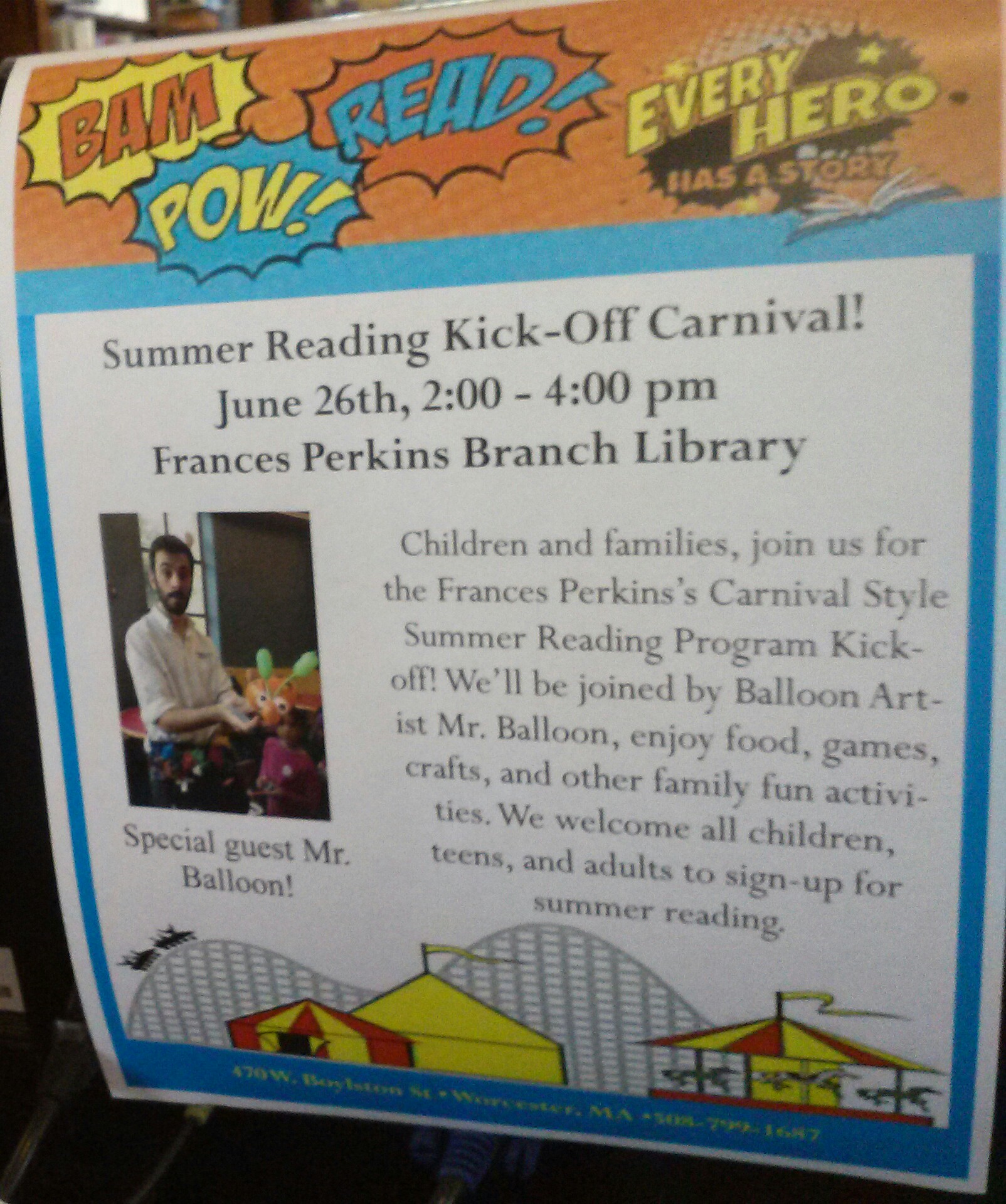 Great pic! These lovely ladies will be in the parade! – R. T. 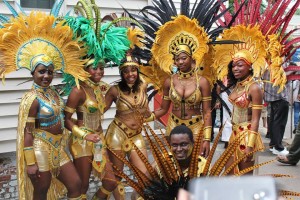 Worcester’s very first Carnival will be starting in Worcester at noon THIS Sunday, AUGUST 25, with a parade starting from in front of Foley Stadium. It will proceed down Park Avenue from Chandler Street and turn on to Salisbury Street where the judging will take place in front of Institute Park. Vendors will be set up in the park with a Noon start.  There will be all types of food, jewelry and other goodies.  There will be musical performances in the Park throughout the day.  Carnival ends around 5 pm officially.  There will be also activities for children. This is an all ages and all peoples event! Open to anyone who wants to have a good time and hear good music.

Peace Worcester People!  I hope you are all in the best of health ~ mentally as well as physically!  Today I am writing about the NEXT BEST THING to happen in WORCESTER ~ our very own Caribbean American Parade and Carnival!  I sat down with the Coordinator of this great, upcoming event, Jennifer Gaskin from the Worcester Caribbean American Carnival Association and learned something new about Caribbean Culture.

Caribbean Carnival is the term used for a number of events that take place in many of the Caribbean islands annually.  The Caribbean’s Carnivals all have several common themes many originating from Trinidad and Tobago Carnival, which is the most notable and imitated, based on folklore, culture, religion and tradition. Carnival tradition is based on a number of disciplines including: “Playing Mas”/Masquerade; Soca (Calypso) Music and crowning a Soca (Calypso) King or Monarch; Panorama (Steel Band Competition); Jouvert morning; and a number of other traditions like the Band Launching and Kiddie Carnival!

Worcester is getting ready to have it’s own Carnival and I am so excited!

What is it (historical)? Carnival and community celebrations dates back to pagan and ancient / early religions.  As you know, Christianity is made up of lots of different pieces of ancient and old ways of worship.

“Some of the best-known traditions, including carnival parades and masquerade ball masquerading, were first recorded in medieval Italy. The carnival of Venice was for a long time the most famous carnival. From Italy, carnival traditions spread to the Catholic nations of Spain, Portugal, and France. From France, they spread to the Rhineland of Germany, and to New France in North America. From Spain and Portugal, they spread with Catholic colonization to the Caribbean and Latin America. In 1823 the first worldwide carnival parade took place in Cologne, Germany.

The Lenten period of the Liturgical year Church calendar, being the six weeks directly before Easter, was marked by fasting and other pious or penitential practices. Traditionally during Lent, no parties or other celebrations were held, and people refrained from eating rich foods, such as meat, dairy, fats and sugar. The forty days of Lent, recalling the Gospel accounts of the forty days that Jesus spent in the wilderness, serve to mark an annual time of turning. In the days before Lent, all rich food and drink had to be disposed of. The consumption of this, in a giant party that involved the whole community, is thought to be the origin of Carnival.

While it forms an integral part of the Christian calendar, particularly in Catholic regions, some carnival traditions date back to pre-Christian times. The ancient Roman festivals of Saturnalia and Bacchanalia may possibly have been absorbed into the Italian Carnival. The Saturnalia, in turn, may be based on the Greek Dionysia and Oriental festivals. While medieval pageants and festivals such as Corpus Christi were church-sanctioned celebrations, carnival was also a manifestation of medieval folk culture. Many local carnival customs are based on local pre-Christian rituals, for example the elaborate rites involving masked figures in the Swabian-Alemannic carnival.

An old tradition in Southern Germany, carnival is the time of the year when the reign of bad spirits of the cold and grim winter period is over and these spirits are symbolically being hunted down and expelled. By the end of winter, each year around January and February, people dress up as demons, witches, earthly spirits and dreadful animals to enact this scene of symbolic expulsion. What happens in fact is an expulsion of the winter season that symbolizes death, silence and destruction. (Just look at what happens to plants in a cold winter and you get the image.) So before spring can come and the perennial cycle of life can start over again, old forms have to be destroyed for new ones to come into existence. The notions ‘carnival’ (carne = meat) or ‘fastnacht’ (= at the wake of Lent) also refer to the beginning of the Christian tradition of the 40 day-long fasting (or Lenting) season. Whereas during carnival, people go mad, chaos rules, hierarchies are overthrown and one indulges in food and drinks, the fasting season marks an end of this. Remembering the suffering and death of Jesus, many Christians abstain from meat, alcohol, sweets and festivities until Easter, the resurrection of Jesus. All these rituals are telling stories of death, chaos, life-cycles and resurrection.

Carnival — this combination of pagan beliefs and Christian traditions — can thus be interpreted as the symbolic preparation for a new annual cycle.”

So, what happens when you bring this religious celebration to the islands of the Caribbean and force the Christian religion on the enslaved and indigenous people of those regions, who, in their own lands had similar celebrations seeing as Africa is a festival continent. Throughout the whole continent, colorful and vibrant festivals range from the Festival of Masks in Ivory Coast and Mali, The Festival of Kings in Ghana and other various Festivals celebrating music and arts.  Introduce this religious celebration to the peoples of the Islands and takes on a life of its own!  Hence … Caribbean Carnival!

There is a large populous of Island people here in Worcester.  Jamaica, Trinidad, Grenada, Antigua, Barbados, Beliz, Haiti and Guyana to name a few!  When I asked Jennifer what made her want to bring CARNIVAL to Worcester she explained that her family is originally from Grenada, and she grew up in Toronto and Boston which both have huge Carnival festivities.  She moved to Worcester 10 years ago, and was surprised to find that there was no Carnival celebration here!

“Boston, Cambridge, Springfield, Hartford all have Carnival festivities.  Worcester didn’t have anything.   I started to see that there was a large Caribbean culture here and thought it would be a great idea to bring the Carnival to the city.”

Jennifer and her family have been involved in Boston Carnival for a number of years.  Both of her children belong to a MAS CAMP.  MAS is a group of people who come together to sponsor a band / float for the Parade.  MAS is short for masquerade.  Some MAS CAMPS have been around for years and there is history and culture surrounding their existence!  “We are keeping the culture alive through bringing our children up through the Mas.  Mas becomes a family.”  The Camp decides what theme they will celebrate and designers come up with beautiful, vibrantly colored costumes that reflect the theme.  The MAS Camps are also broken down into sections.   Adults and children are both included.  They have a Front Line which is a large costume, Mid Line and Back Line.

The MAS Camp that Jennifer and her children are a part of is called INTERNATIONAL MASQUERADERS. The theme they have chosen for this year will be Gods and Goddesses! You may have seen them at stArt on the Street this past June.  The contact for International Masqueraders is Tanisha Layne 617.938.1385.

On the day of the parade each MAS and band or group will be judged in different categories which include originality, color, how the theme was portrayed (energy/vibrancy).  There will be a Band of the Year, King, Queen and Monarch crowned by guest judges after the judging as they enter the park.

ONCE AGAIN: Worcester’s very first Carnival will be starting in Worcester at noon on Sunday, AUGUST 25th with the parade starting from in front of Foley Stadium. It will proceed down Park Avenue from Chandler Street and turn on to Salisbury Street where the judging will take place in front of Institute Park. Vendors will be set up in the park with a Noon start.  There will be all types of food, jewelry and other goodies.  There will be musical performances in the Park throughout the day.  Carnival ends around 5 pm officially.  There will be also activities for children. This is an all ages and all peoples event! Open to anyone who wants to have a good time and hear good music.