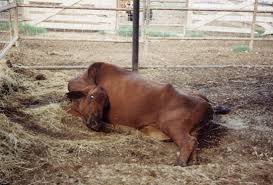 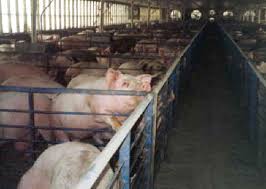 Animals in slaughterhouses can smell, hear, and often see the slaughter of those before them.

As the animals struggle, they’re often abused by frustrated workers, who are under constant pressure to keep the lines moving at rapid speeds.

Workers are often seen kicking cows, ramming them with the blades of a forklift, jabbing them in the eyes, applying painful electrical shocks and even torturing them with a hose and water in attempts to force sick or injured animals to walk to slaughter.

Federal law requires mammals be stunned prior to slaughter .Typically, electric current is used to induce a heart attack and/or seizure; or a captive bolt gun is used to deliver a blow to the skull or shoot a rod into the animal’s brain.

It’s not uncommon for an animal to suffer one or two failed stuns. In the case of a failed electrical stun, an animal may be paralyzed without losing sensibility.Unconscious animals whose necks are not cut soon enough may regain their senses after being hung on the bleed rail. Hogs, unlike cattle, are dunked in tanks of hot water after they are stunned to soften the hides for skinning. As a result, a botched slaughter condemns some hogs to being scalded and drowned. Hogs will squeal and kick as they are being lowered into the water.

Video evidence obtained by one investigator shows slaughter plant workers displaying complete disregard for the pain and misery they inflicted as they repeatedly attempted to force “downed” animals onto their feet and into the human food chain.

Sounds like a good argument to want to cut back on meat to me, how about doing it for your health also!

Processed meat is high in calories, fat and sodium. The more bologna, ham, and sausage that you stuff inside your sub roll or pita will add up to more calories, more fat and more sodium. Too much salt in your body leads to water retention and bloating. Many of these processed meats are casually referred to as “luncheon meats” for good reason. They are easy to slap in between two pieces of bread for a mid-day meal.

Consider the burden you place on your body when you eat hot dogs or processed-meat subs. High levels of sodium weaken blood vessels. This leads to heart disease.

It can be challenging to serve healthy meals on a budget, but with planning you can eat better for less. Many people save money by adding meatless meals to their weekly menus. Meatless meals are built around vegetables, beans and grains — instead of meat, which tends to be more expensive.

The health factor: A plant-based diet, which emphasizes fruits and vegetables, grains, beans and legumes, and nuts, is rich in fiber, vitamins and other nutrients. And people who eat only plant-based foods — aka vegetarians — generally eat fewer calories and less fat, weigh less, and have a lower risk of heart disease than nonvegetarians do.

Just eating less meat has a protective effect. A National Cancer Institute study of 500,000 people found that those who ate 4 ounces (113 grams) of red meat or more daily were 30 percent more likely to have died of any cause during a 10-year period than were those who consumed less. Sausage, luncheon meats and other processed meats also increased the risk. Those who ate mostly poultry or fish had a lower risk of death.

How much protein do you need? The fact is that most Americans get enough protein in their diets. Adults generally need 10 to 35 percent of their total daily calories to come from protein. Based on a 2,000-calorie-a-day diet, this amounts to about 50 to 175 grams a day. Of course, you can get protein from sources other than meat.

In fact, the Dietary Guidelines for Americans recommends choosing a variety of protein foods, including eggs, beans and peas, soy products, and unsalted nuts and seeds. The guidelines also suggest replacing protein foods that are higher in solid fats with choices that are lower in solid fats and calories. The fats in meat, poultry and eggs are considered solid fats, while the fats in seafood, nuts and seeds are considered oils.

Just cutting back on meat will help yourself and the animals…Think about it!

Food Safety and Inspection Service (FSIS) veterinarian Dean Wyatt recently blew the whistle on his agency, telling a House Oversight and Government Reform subcommittee that FSIS managers repeatedly ignored his warnings about unsafe and inhumane practices at slaughterhouses in Oklahoma and Vermont. While working at these facilities, Wyatt witnessed calves being dragged along the ground because they were too weak to stand, cattle being left to writhe in pain after they were haphazardly shot in the head with captive-bolt guns, pigs being trampled and crushed as they were unloaded off trucks and other atrocities.

Why should this matter to you? The same uncaring system that allows workers to beat animals without provocation and to cut pigs’ throats while the animals are kicking and squealing (actions that were witnessed by Wyatt) also allows carcasses contaminated with feces and vomit, tumors and abscesses, to be sent down the line. END_OF_DOCUMENT_TOKEN_TO_BE_REPLACED