Most likely, you have also felt the way I have: insecure, and frustrated, here in the city of Worcester.

My name is Belkis Alba; I moved to this city from Florida, with the strict purpose of progressing and contributing to this nation, the same nation that adopted me and I love so very much.

Overachieving, I invested and received all my permits and filled out all the requirements that the law stresses so that I could become a taxi driver.

Once I was signing in to my business, on the 26[th] of May, on Charlton Street, corner of Main [Street], I decided to cross to get some lunch at the restaurant “Los Primos.”

In only four minutes, my belongings from within my car were stolen. More than $1,000 was taken from the expense of my GPS and my iPhone.

I made the report to the police immediately, but it was taken as little to no interest. I returned three times to ask about my stolen belongings. Eventually I stopped insisting after noticing that once I reached the window, I was just another number. This was brought to my attention with the realization of the police having video recording of the robbery, but still had no response when I returned for updates.

So, my friends, I had to reinvest on my working equipment, without any investment on the table, and having to pay the taxi base and the liberty insurance.

Either way, I didn’t let it get to me. I maintained positivity while working at my taxi job. Then I received a call from the work base (Ecualimo) to go pick up a man. This man was of short height, dark skin, and with decayed teeth. The man had asked me to take him to three different locations, and once returning home he said: “ Wait for me here, I’ll be back with 60 dollars”. He entered his building and never returned …

I have also been a witness of the injustice and rudeness of police officers in the area. On many occasions, during my taxi rides, I have come to notice that in different situations a group of officers have followed my car without me committing any faults. They would constantly check the license plate. Then they would realize I had no legal errors in the car I was driving, and would move on to the next vehicle only to repeat the process.

These are my obligated questions:

Why is it that when we try to work, we feel prosecuted, unprotected, insulted, and mocked?

Why is it when we try to make a report, we feel like the police of Worcester treat us like just another number to the list?

Why is it that the responsible citizens that only want to work and contribute get their rights insulted in a vulgar manner? Even if we have proof!

Who receives the rights and guaranties?
Who runs the police? Who do they listen to?

Where is the justice for everyone?!?!

Sincerely,
Belkis Alba
via the Internet 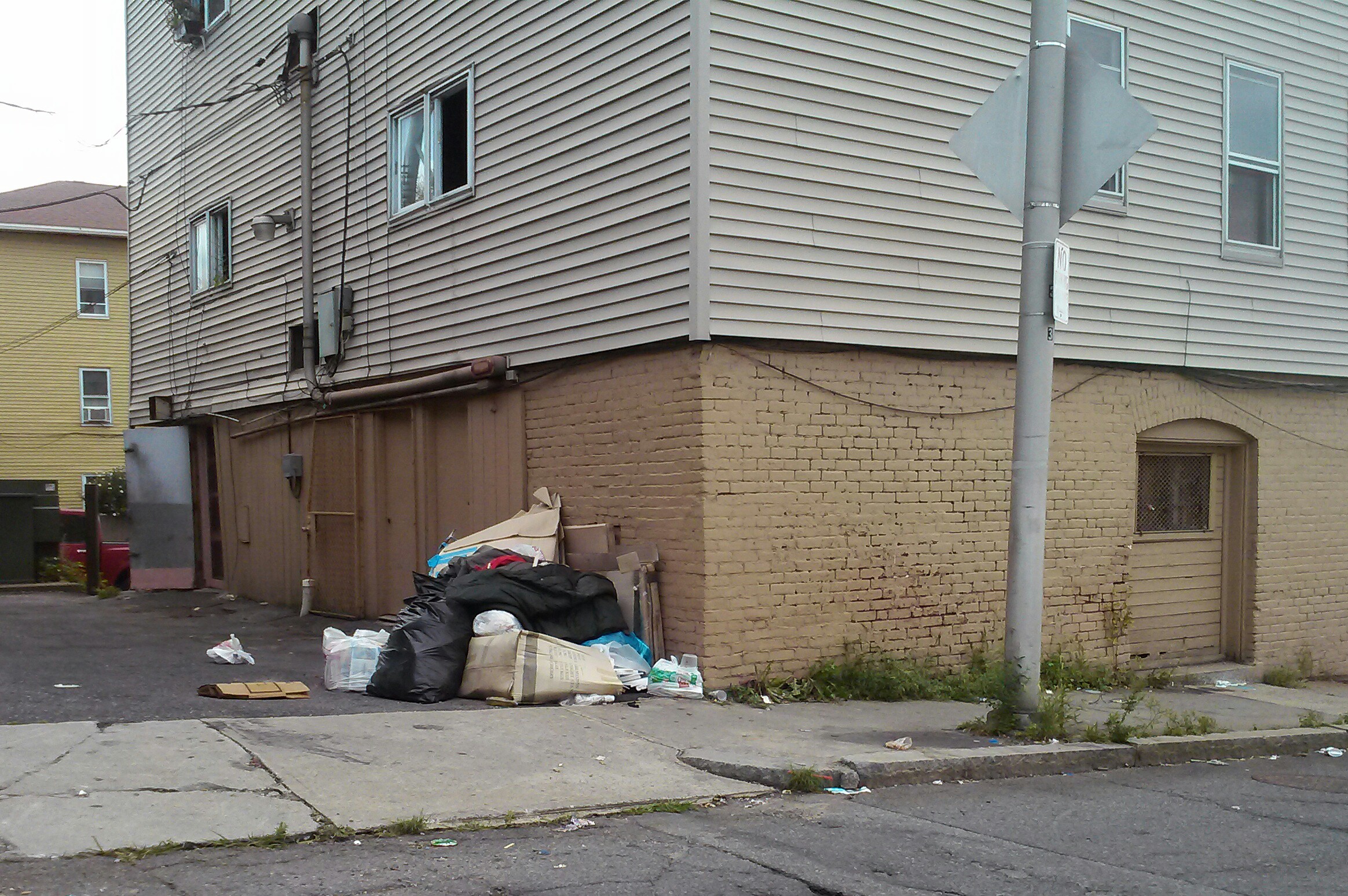 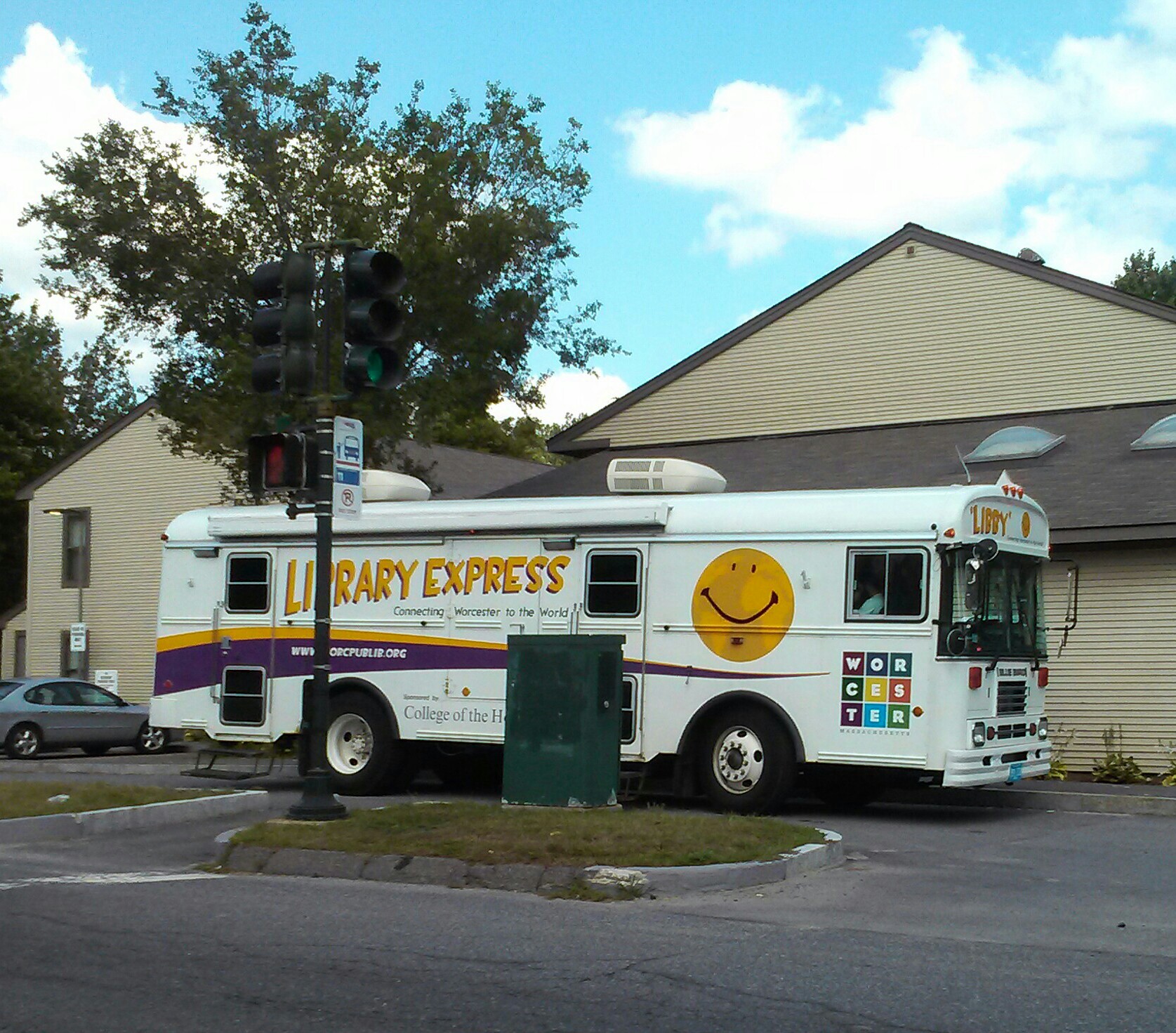 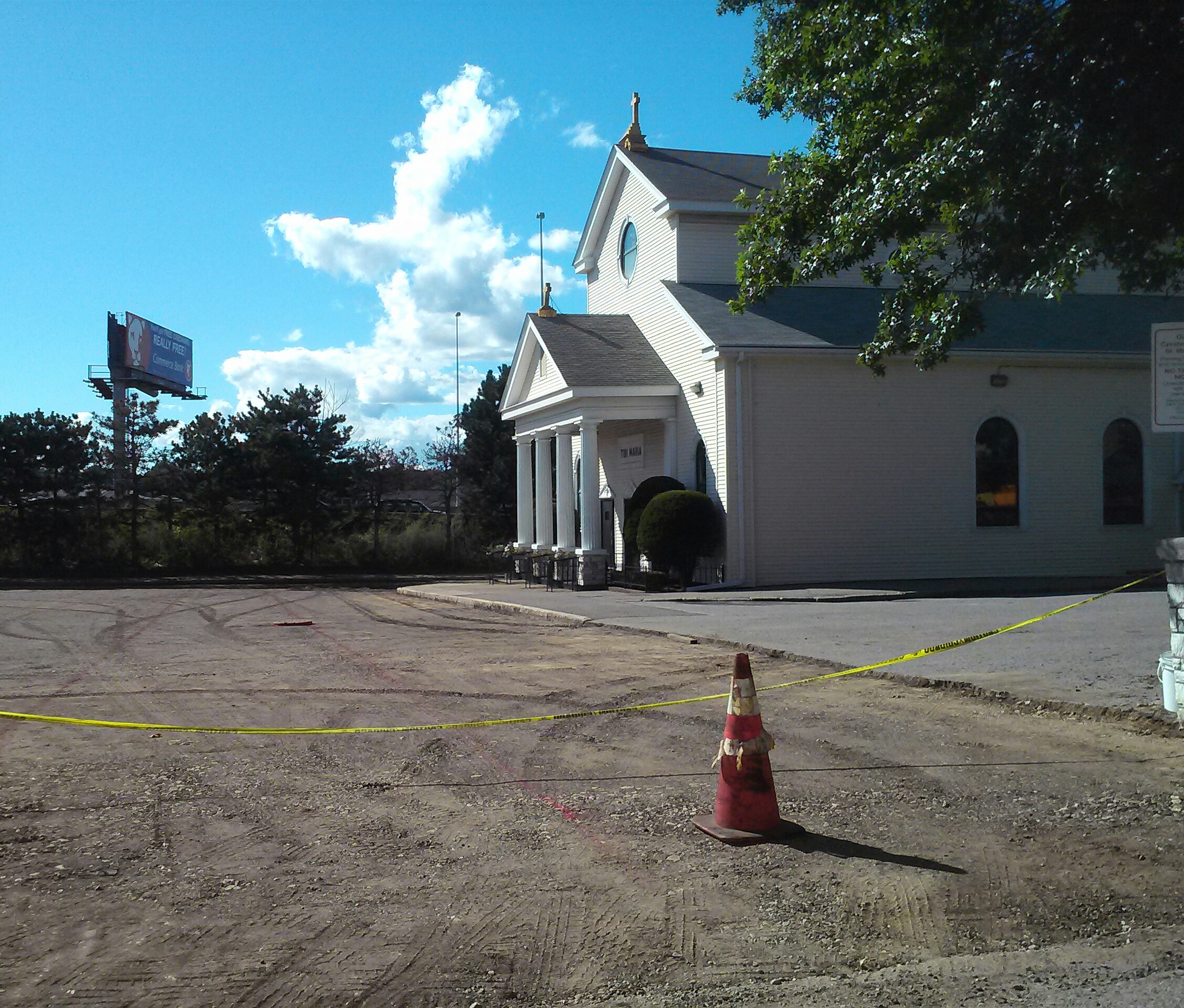 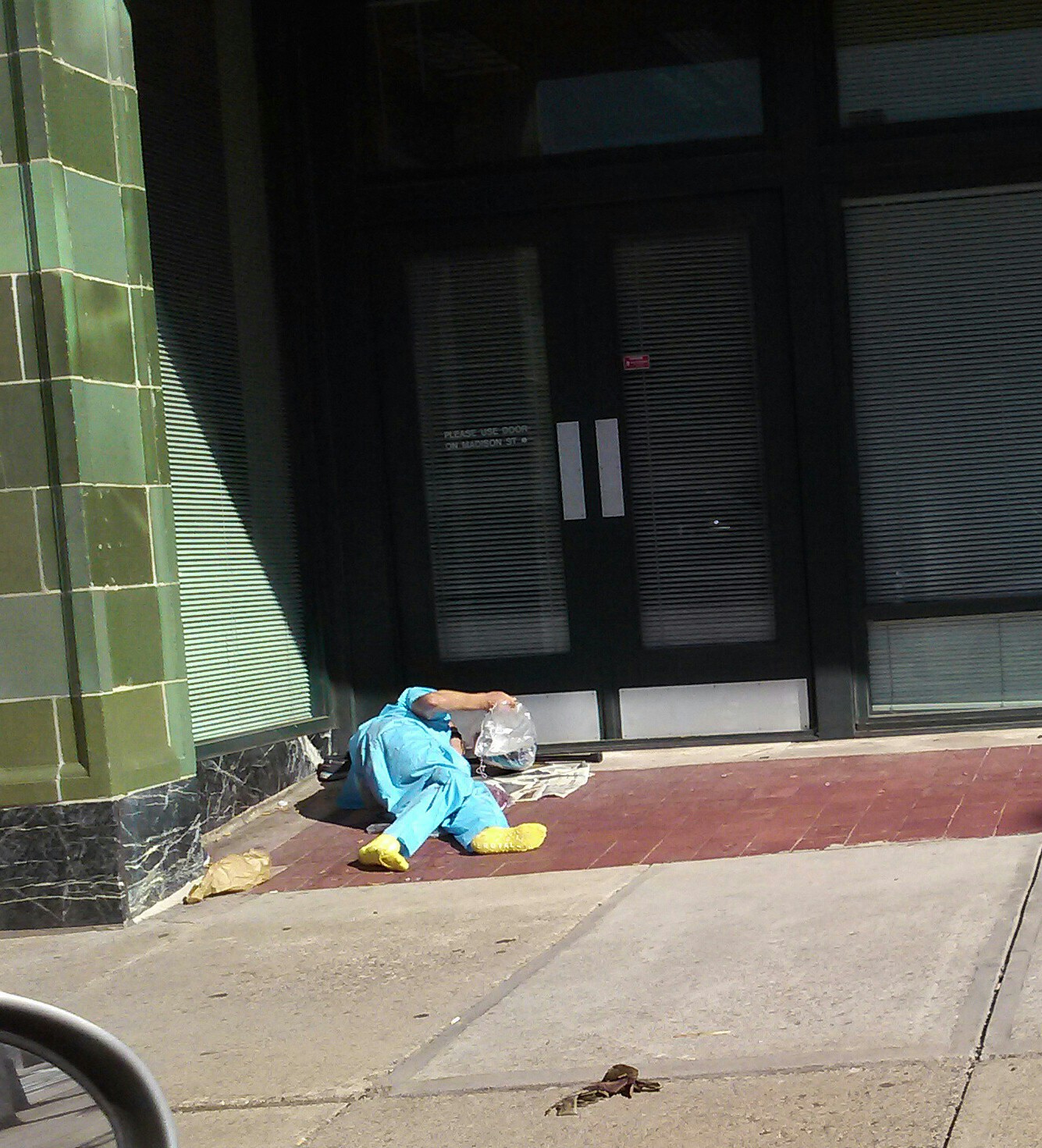 Took this pic a few days ago, while driving through Main South. Mattresses behind the old PIP wet homeless shelter on the corner of Main and Charlton streets. Illegal dumping? A place for homeless folks to crash at night? Junky shooting gallery? Inner-city blues …  – R. Tirella 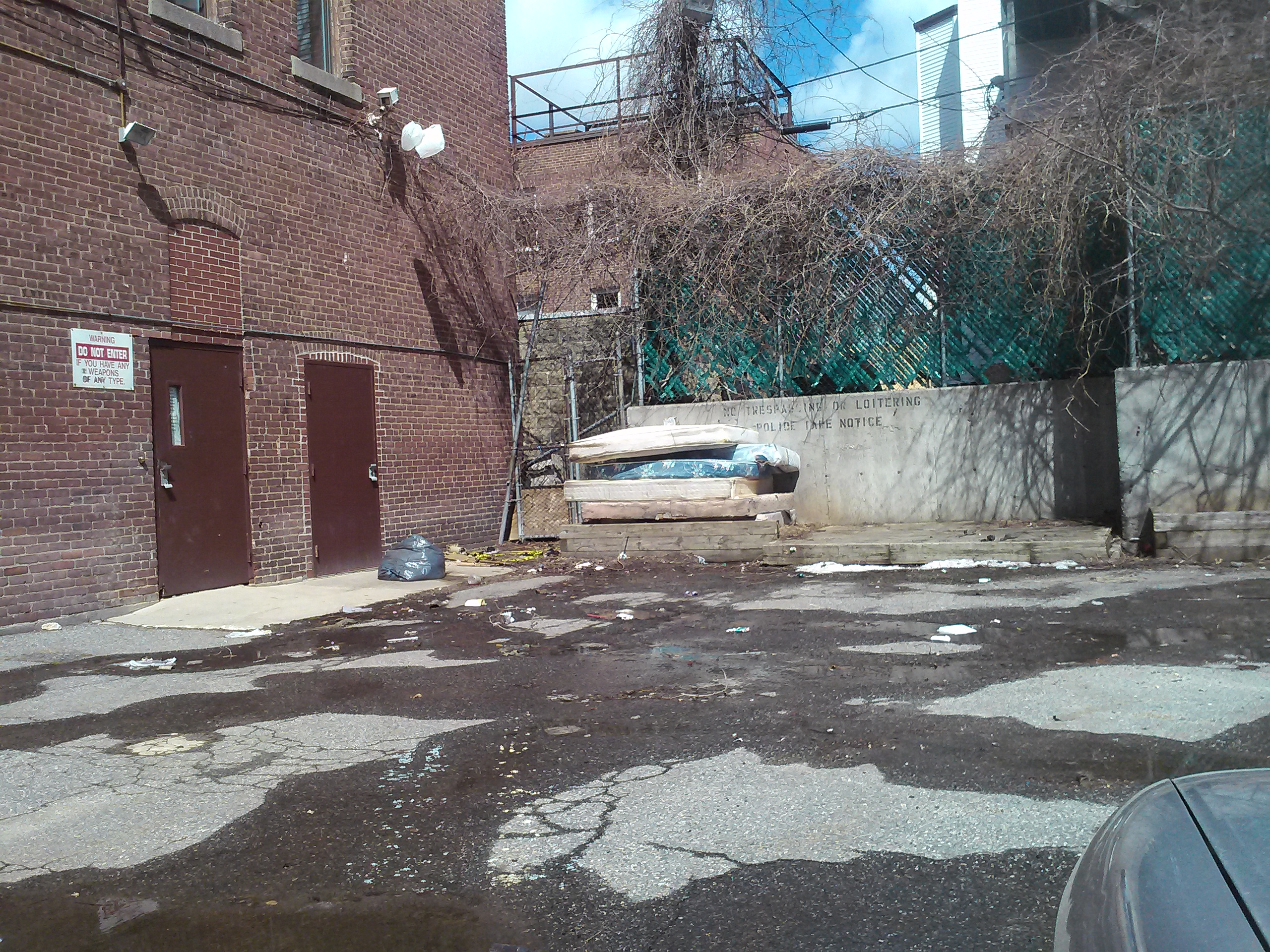 As I write these lines, I had just hung up the telephone from calling the police department once again this night in order to have the troublesome drug dealers moved along from out front of my building. One would think that with the shelter being officially closed, there would be no legal reason whatsoever that people could use to justify their presence under the windows of my tenants, at what is now 2:46 a.m.

Prior to the first of my two calls this night, I had returned from the Webster Square area to Main and Charlton, having seen no people loitering around any closed businesses along my route anywhere else, all the way form Main and Stafford streets at Gardner Square, until coming to my block (the PIP/Charlton and Main streets), where there were, I counted, 11 people standing in the various doorways outside of closed for the night businesses in my immediate area. Nowhere else along the length of Main Street, only here did I see anyone hanging around at close to midnight.

Recently the great fire happened at the three buildings on the left side of the end of my side street, on Charlton Street. A vacant building undergoing extensive renovation with a new foundation having been poured, and an off foundation renovation of the entire three-decker structure was totally destroyed by a fire. Being as it was situated between the other two burned buildings, and given the probability that there were no sources of ignition such as electrical power or natural gas service to the building, it can be assumed that it was intentionally set on fire.

My own theory is that some person, or persons unknown, set the fire deliberately in the vacant structure to stay warm, as it was very cold that night. … I only can go by my own experience, and my own observations seeing as I came home that morning to see my road blocked off at both ends still, and that was at 8:45 A.M. or so END_OF_DOCUMENT_TOKEN_TO_BE_REPLACED

I attended the “Prostitution” meeting held at the board room of the Community Development Corporation Headquarters located at 875 Main Street, which was quite well attended by community activists like me, and just plain old ordinary citizens who are fed up with the everyday bullshit that comes along with the associated crimes that prostitution helps support.

Since that time, returning to what I refer to as: “ground zero”, the property that I manage located right next door to the venerable P.I.P. Shelter, and armed with a new resolve not to let the insanity continue unabated, I had the good fortune to be renovating a vacancy that sits smack dab on top of the action outside the window, and due to my penchant to work unorthodox hours continuing throughout the night, I was able to see and hear what my tenants have to endure every single night without fail.

The tenant that we finally got shed of was involved in lots of the goings on outside the windows, and sad to say had contributed to my building being perceived as a place to go to use and abuse drugs. Even though I have a “No visitor policy” in effect to prevent just such a thing. I found several cut baggie corners and a whole lot of cut knots, that indicate that lots of crack cocaine was smoked in that room. The tenant always professed to be in recovery, and not doing that anymore, but the evidence tells the tale better than anything else. Not to mention the two used glass crack pipes that I found while cleaning out the room END_OF_DOCUMENT_TOKEN_TO_BE_REPLACED