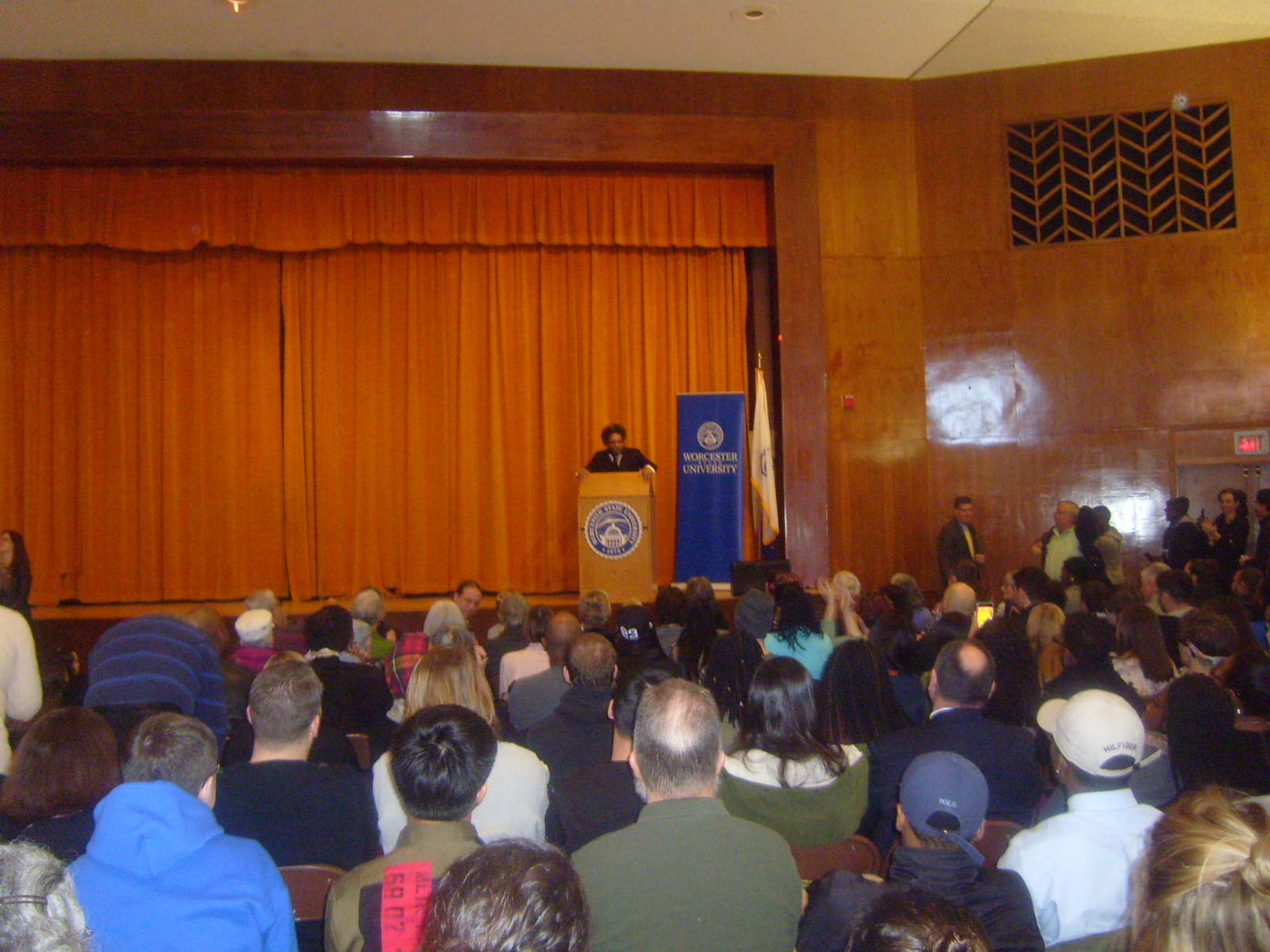 Dr. Cornell West spoke at Worcester State University last night. He is a difficult man to understand, but most philosophers are. He certainly stepped on everyone’s toes without any apparent concrete ax to grind.

At first Dr. West talked about love and how it will change the world. By love he means love or the love of human interactions and charity. He feels this should be our primary motivation. He reminded me of a gentleman in Worcester who also says that his enemies will be swept away with this love.

Next Dr. West talked of integrity of the individual and how we should not succumb to the prostitution of ourselves for money and banality. It was almost sermonlike.

Then toes started to get stepped on. He said many of the churches preached the gospel of prosperity or pray to God and you will get rich or be free of material want.

He attacked President Obama, saying we have a Black President, a Black Attorney General and a Black head of Homeland Security, and the racist cops still are not being punished.

Dr. West had a good word for Malcolm X whom he saw as a model of the redemption of the individual, a man who could change his life for the better in terms of social interactions and leadership.

The Constitution of the United took a hit. Dr. West pointed out that the Constitution made legal the exploitative nature of the political bosses of the American Revolution, codifying slavery.  His point, as I understand it, is: the things that are legal are not always just; we should not fall into the trap of thinking legality equals justice.

There was an irony, I suppose, in his analysis of presidential candidate Donald Trump. Dr. West sarcastically called Donald Trump “brother.” He said brother Trump was not yet a fascist. Dr. West thought Trump to be an egomaniac who likes showing off how smart he is. The irony is that Dr. West seemed to be doing the same thing.

Unfortunately, most of West’s audience was Worcester State University students who did not seem to grasp the shock values of Dr. West’s assertions. The terms he used, like “neo liberal,” seemed to confuse many.

From my own experience, terms used by contemporary college students like “intersectionality” go over my head as well.

Dr. West is in his sixties, and a generational gap may be developing with semantics of the 1960s and 2010s. I heard some of the students leaving say that they wanted to cut through the crap and get to the message.

When you do not have a cause, speech becomes more philosophical or ethical.  It is like someone showing off how smart he is.

What I learned years ago from Dr. Hampsch, one of my philosophy teachers at Holy Cross, is that Karl Marx changed philosophy when he said our job is to make history, not just to study it. That thought came to me as I listened to Dr. West.