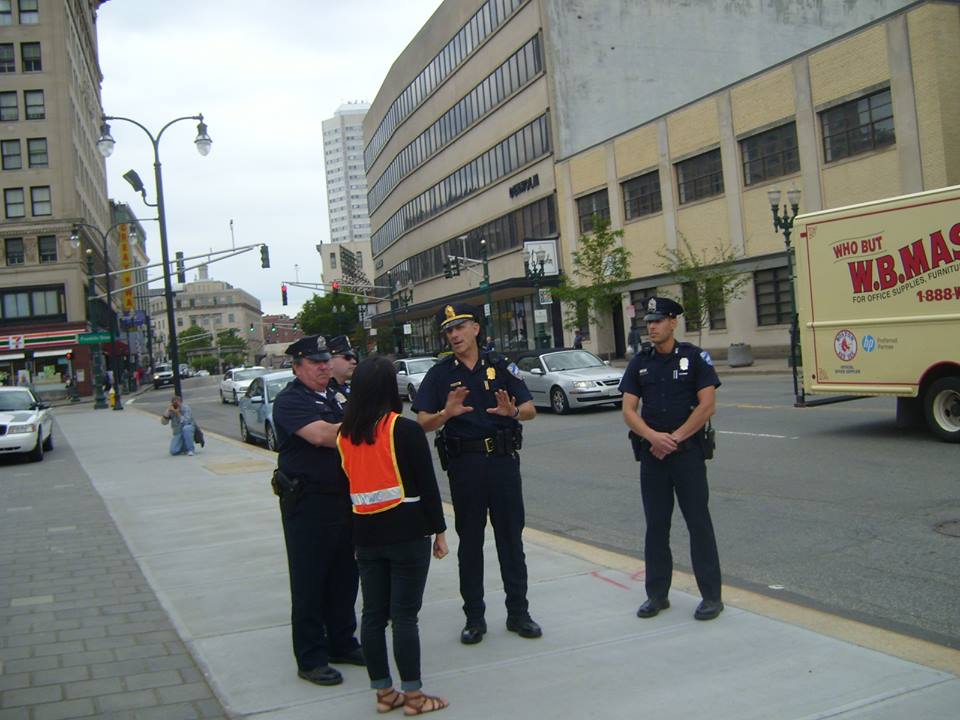 Recently the Department of Justice wrote a negative report regarding misconduct and the poor practices of the Cleveland Police Department.

Some of the issues in Cleveland that were found in need of improvement:

The unnecessary and excessive use of deadly force, including shootings and head strikes with impact weapons

The unnecessary, excessive or retaliatory use of less lethal force including tasers, chemical spray and fists

Excessive force against persons who are mentally ill or in crisis, including in cases where the officers were called exclusively for a welfare check

and the employment of poor and dangerous tactics that place police officers in situations where avoidable force becomes inevitable and places officers and civilians at unnecessary risk.

The report also described a lack of transparency in the Cleveland Police Department that allowed the misconduct to continue over many years.

For decades this information has been kept from the public, even when ordered by the courts to make it public.
The ACLU, the daily and others have tried to obtain what should be public records from the Worcester Police Department – a city department funded by the taxpayers. With each attempt, the Worcester Police Department has blocked any significant release of public records.

There is evidence of police misconduct.

The latest being the allegations that a Worcester Police officer beat up a shackled prisoner in the Worcester lock up.

Even here the videotape of the alleged misconduct has not been released.

In light of the many allegations of misconduct by the Worcester Police and the lack of transparency, an investigation by the Department of Justice would be welcomed.

1. the Worcester police are relatively well managed and the department is doing a good job.

2. the Worcester Police Department is non-compliant to the civil rights of residents – police officers can be abusive.

3. the Worcester Police Department is slightly flawed and in need of only some changes.

This DOJ investigation will confirm or belay any trust issues with the communities of color. The powers that be should not be afraid of such an investigation by the Department of Justice. After all, the city manager asked it to come to Worcester to help with race relations. It makes sense for city officials to now ask the Department of Justice to give its seal of approval – or disapproval – to the Worcester Police Department.

This is troubling: At DOJ meeting #1, held May 18 at the YWCA in Worcester  – a black woman was booed by white people when she raised the suggestion of the Department of Justice investigating the Worcester Police Department. It was more troubling when a local newspaper columnist made light of her suggestion.

There still exists a great divide in race relations in Worcester.

There is a need for the additional action of the Department of Justice. The DOJ should investigate the Worcester Police Department – to see the good and what needs to be improved. Local lives hang in the balance.

It seems local activists are writing a letter to the U.S. Attorney office of Carmen Ortiz – making this petition.

Worcester City Manager Ed Augustus released his report on how to make Worcester a more diverse city last week. His ideas are reasonable but late, inadequate and besides the point.

The ideas raised by Augustus (the list was published in the daily but REMOVED within 48 hours!) are mainly old ideas that have failed or old ideas that should have been implemented in Worcester decades ago.

The big idea in the report is the creation of a “Chief Diversity Officer” whose job is to make sure that different populations in Worcester know about and apply for City of Worcester jobs. This should have been an ongoing effort by the City with or without a Chief Diversity Officer. I suppose Augustus will now have a scapegoat to point to when, due to Worcester’s  institutional racism, the City’s work force does not reflect its population.

Another big idea that failed and is being reestablished is the so called Worcester Clergy/ Police Alliance. The problem with this “alliance” is that the well meaning Clergy do not have much influence beyond their own congregations. The police, the Mayor, and the Manager will get well meaning Clergy to stand behind them in photo opps, but do not expect anything substantial to come of it.

The restructuring of the Affirmative Action Advisory Committee is just a reshuffling of papers. Nobody in our city government listens to them, and the good people there do not want to get on the bad side of their sponsors by being too critical.

Like other city committees, the Affirmative Action Advisory Committee serves at the pleasure of the City Manager.

The issues of police body cameras, cruiser cameras, and lock up camera should have been done years ago.

It is being done now because of the pressure of the Black (all) Lives Matter new civil rights movement.

As the manager’s report says, the use of these items are being “investigated.” What is not in the report is civilian review of the police. Neither the City Manager who is the boss of the police nor the Worcester Human Rights Commission has a mention in the reports as a means of review by the public of any alleged police misconduct.

The other items in the report regarding education, voting, youth jobs, etc are already being implemented.

There is nothing new in the report.

I am sure all of the city’s politicians, including new political candidates, will be happy with the report, as it relieves them of the responsibility to tell the truth about the lack of transparency in Worcester government.

Some of the city’s right wing politicians will be critical because they do not want to do anything about diversity and are ready to move out to Holden when the Worcester becomes too diverse.

People I like to call “misleaders” who ingratiate themselves with the politicians will be scrambling to take advantages of some of the so-called new ideas in the report. Many of them are now thinking about how they can be hired as the city’s  “Chief Diversity Officer.” Others actually like to be photographed with the leaders to show they have political “juice.”

It was announced recently that the City of Worcester invited the Department of Justice to hold discussions on race.

The question arises: Why doesn’t the City hold these hearings directly? People have been demanding that there be increased scrutiny of the police department, a review of the seemingly racist overreaction at North High School, and the lack of written city policies on developers hiring Worcester residents for their Worcester construction projects.

Many people have said our public schools are underfunded and a part of a system that will have negative racial impacts.  The people who have gone to Worcester City Council meetings, Worcester School Committee meetings and other meetings are still here and no one from City Hall has asked them to begin a “discussion” on race.

This cover for the City is seen in that it went to the media first before it contacted any Black or Latino person who has raised his/her voice against racism.

The Coalition has said it would announce a schedule for the race discussions on April 24. This makes no sense, given the urgency of the issue. The arrest of a police officer for allegedly beating a handcuffed prisoner at the City lock up adds more urgency to the situation. I don’t think that the City’s Coalition against Bias and Hate has the experience or will to do anything  substantial against racism, given its track record. However, I will keep an open mind on the issue.

The discussion of race should include the urgent discussion of police conduct and that of Worcester City Manager Ed Augustus. He and Worcester Police Chief Gary Gemme are seeking charges against two people who have participated in the Black Lives Matter new civil rights movement and were at the Kelley Square Black Lives Matter protest. This is an obvious attempt by the City of Worcester to intimidate other people who have raised their voices against racism. There is no evidence that can be used in court against the two people, but the City is going forward with its prosecution next week, on April 15.

There will be a rally on April 14, 6:30 p.m., at Worcester City Hall, Main Street, in support of the people being persecuted by the City of Worcester. On April 18, 1 p.m., there will be a discussion of race and police conduct sponsored by the Massachusetts Human Rights Commission and the Progressive Labor Party at the Worcester Public Library, located at 3 Salem Square in downtown Worcester. Be there!

Worcester City Councillor Konstantina (Konnie) Lukes owes the City and its residents an apology for her “support the police department absolutely” resolution. Her resolution and statements made by Michael Gaffney have made it that much harder to appropriately scrutinize police misconduct. This issue should also be discussed during the DoJ discussion on race.

The Department of Justice coming to Worcester and the arrest of the police officer in Worcester for alleged civil rights violations are a sign that the Black (All) Lives Matter new civil rights movement is making an impact. These things would not have happened, if it were not for the protests, meetings, workshops and marches of the people speaking out against racism.