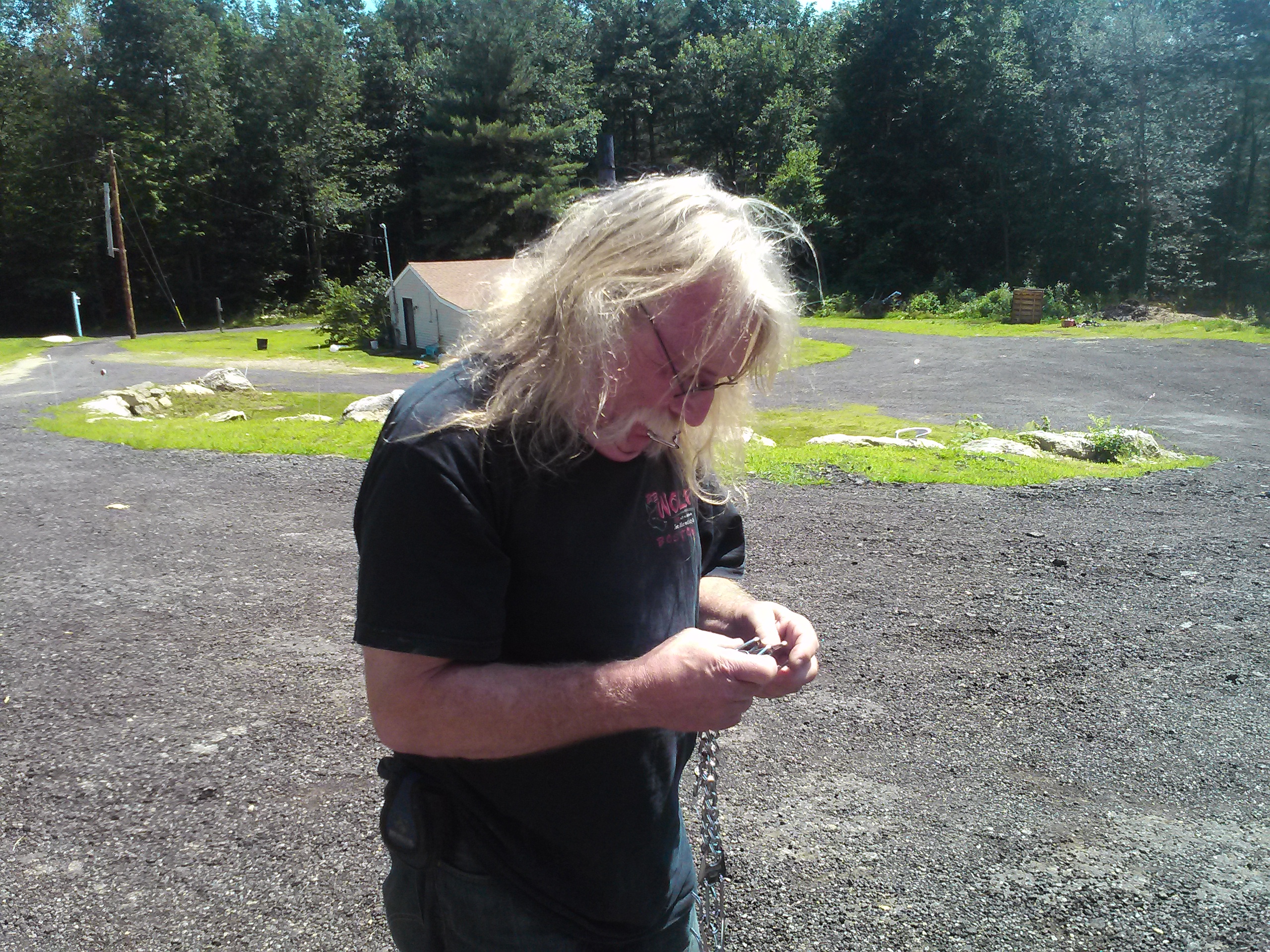 The OIF adds a few links to this pinch collar that he bought for his new dog. I’m not a fan of this type of dog collar, but it helps control a powerful pup with a high prey drive (like Bosch) when he’s out for a walk.

The OIF named his new dog after the German tool company cuz his dog’s a German Shepherd dog and he’s a contractor/carpenter who uses Bosch Tools. Perfect! 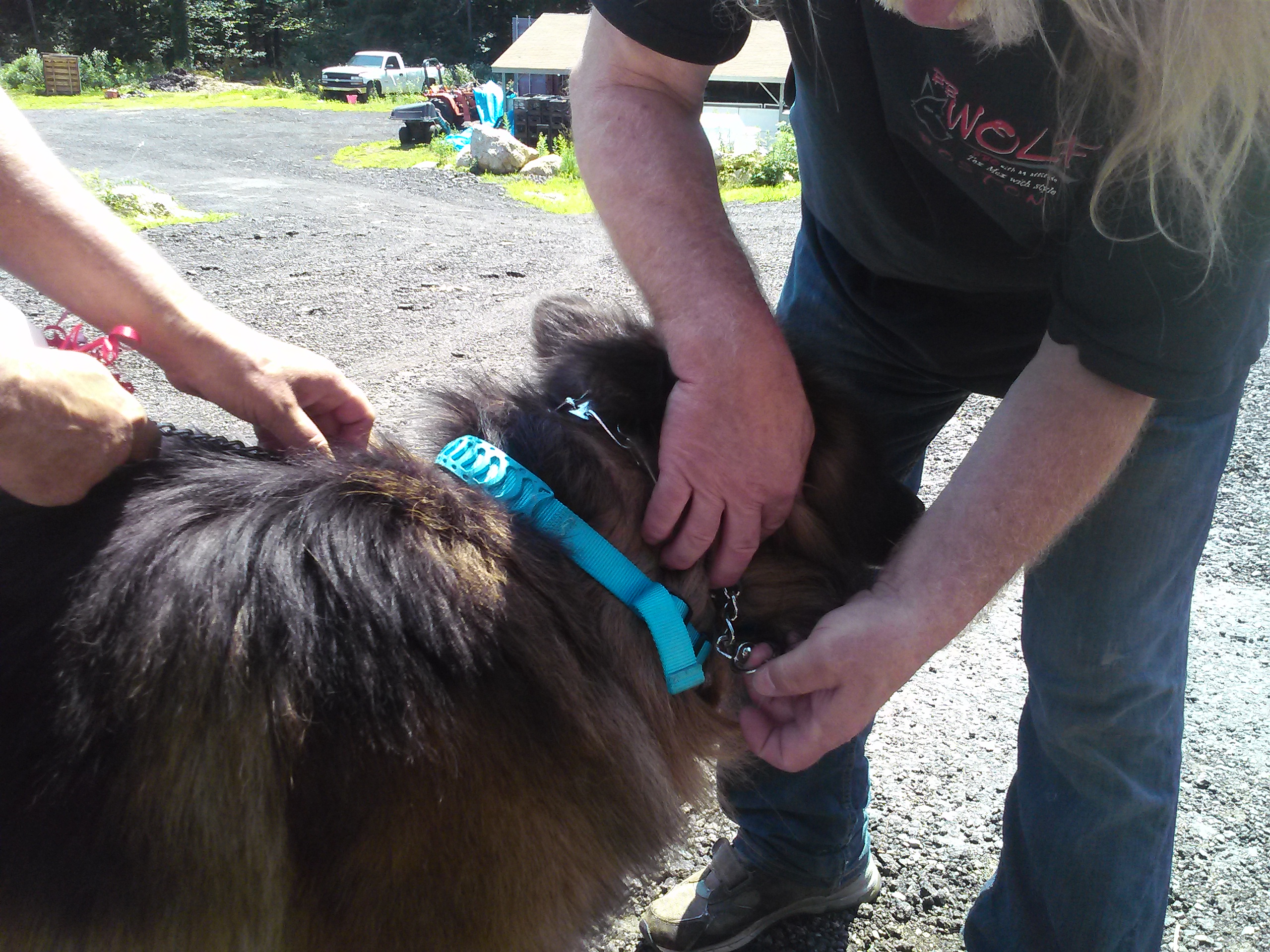 I gave Bosch this baby blue collar. It used to belong to my Nova Scotia retriever, Bailey. Bailey, a huge, rust colored beauty passed away 6 years ago. He used to look so handsome wearing this blue band! So does Bosch! I think my gift touched the OIF because he and the late Bailey were best buds! 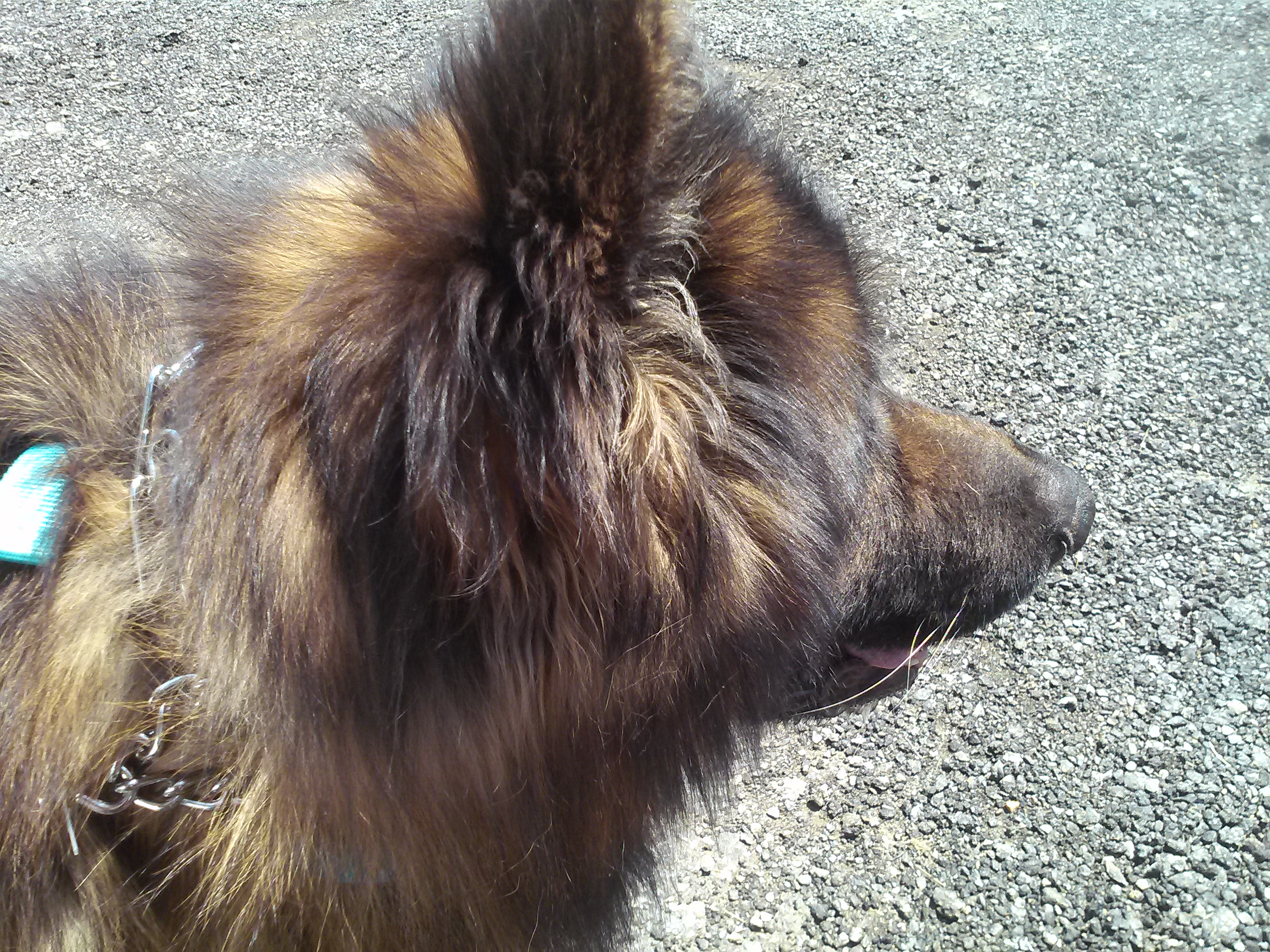 Bosch looks like an adorable teddy bear from this angle! 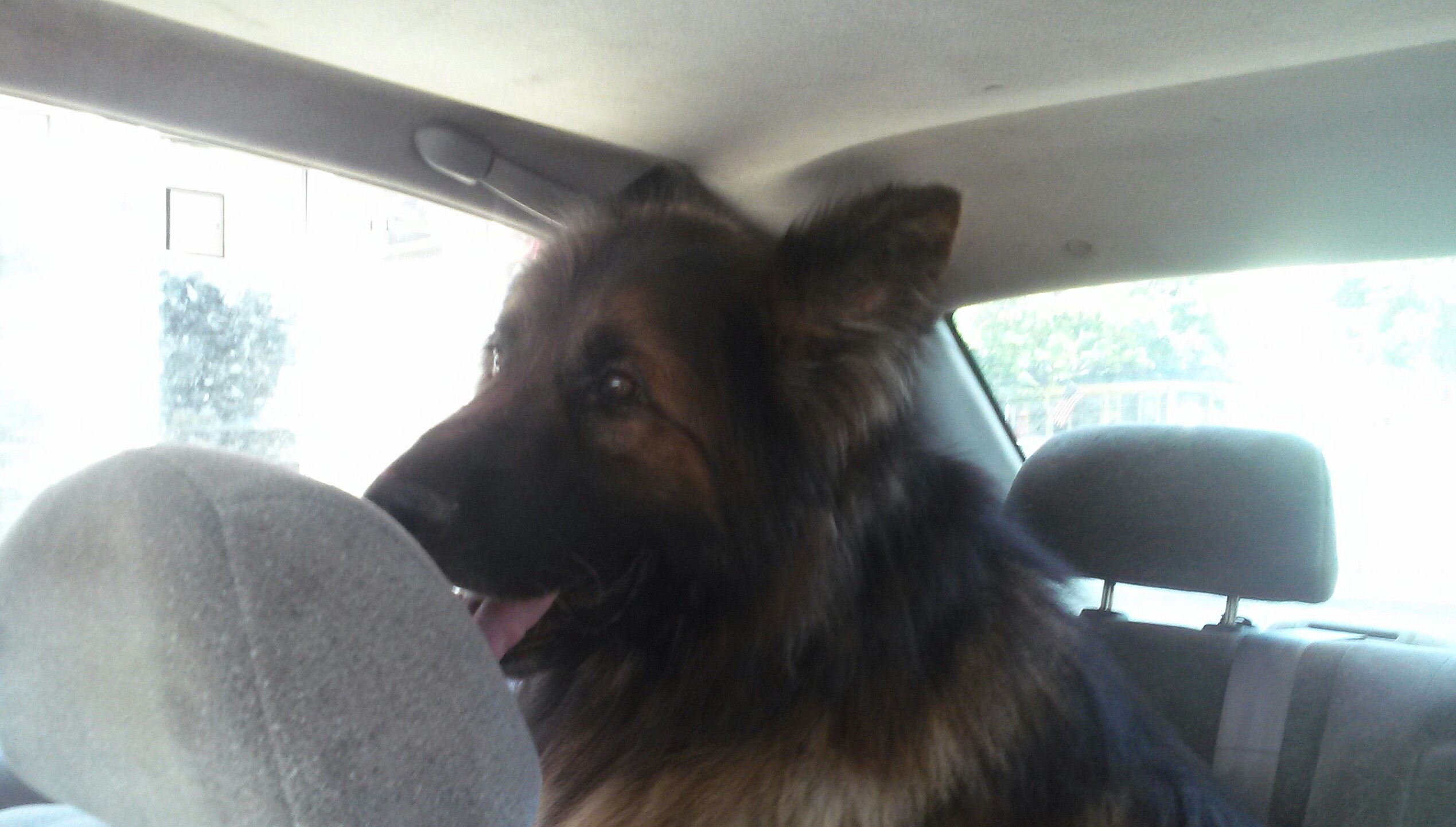 But he’s a GSD! An older dog, close to 11. Big dogs don’t live much longer than 12, but I nagged the OIF into getting him because Bosch’s been in a kennel situation for 3+ years (his owner died of cancer). He has been tough to place in a home because of his high prey drive, age and size.

But now he’s heading into a new life, a life of  high protein, premium dog food, excellent medical care, comfy digs, sleeping on the bed and the sofa with the OIF (the OIF spoils his dogs), two good walks a day, LOVE, LOVE, LOVE … 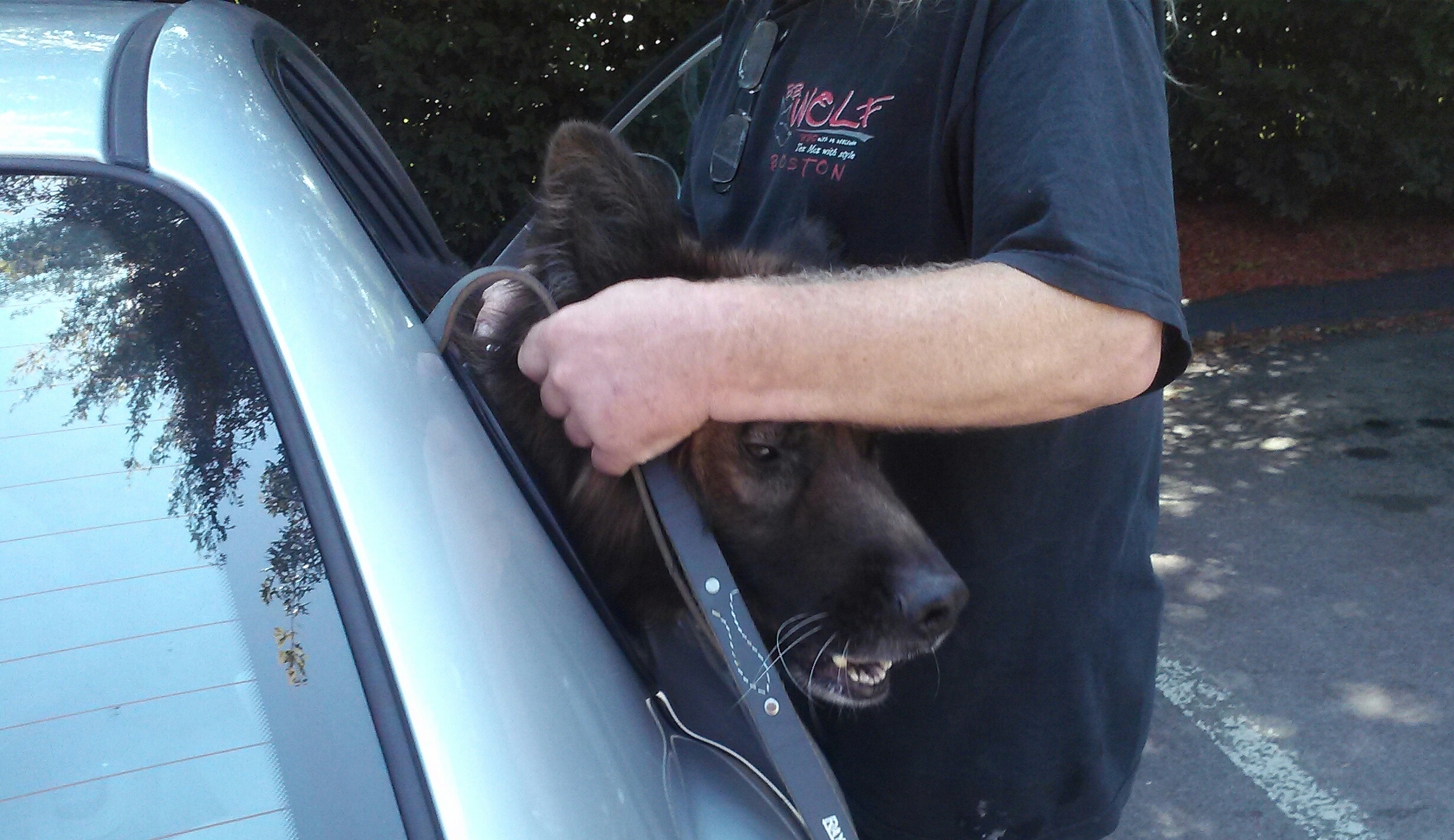 …. thanks to the OIF, who opened his heart and wallet (today we went to the vet right after we got Bosch and the OIF dropped $250 for a wellness check up, some preliminary blood work, etc. Next week vaccinations, stool sample tests, most likely deworming … and another $250 bill. Then in two or so years when Bosch begins to falter the OIF will throw money at all the dog’s medical problems like there’s no tomorrow – anything to keep his beloved Bosch around for another six months. They will be in love with each other! – and Bosch will become a canine money pit. And it’ll be traumatic for the OIF to lose yet another great German Shepherd dog. And so soon! He always told me: dogs don’t live long enough! They leave their human companions too soon!

The OIF sees the paw prints on the wall. He’s had 8 German Shepherds! Still, he committed to Bosch.

He doesn’t think he’s doing anything all that wonderful.

– text and photos by Rosalie Tirella

Ripples just loves to swim! Every afternoon this once emaciated pitbull removed from a Worcester drughouse takes her “dip” in Barton Brook, the namesake of Barton Brook Kennels in Leicester.

“She goes for dives!” says Barton Brook owner/director Pat Dykas, laughing. Dykas says many of the pitbulls that are picked up by City of Worcester Dog Officers and brought to Barton Brook are so out of shape and underfed that at first they can’t handle living in the country – can only “swim” in Barton Brook for “five seconds.”

“Their health is compromised,” Dykas says.

But then it only takes a few weeks of good meals, a safe place to sleep and lots of farmland in which to roll, run and walk and Worcester’s homeless dogs rebound – big time. Under Pat and her family’s loving guidance Worcester’s pitbulls, chihuahua-mixes, huskies and even Pekensese pups blossom. “They put on a pound a day,” Pat says, smiling. Soon they are being walked on the grounds by volunteers, frolicking with their peers in a big enclosed, grassy area and even – a la Ripples – diving into Barton Brook.

A country vacation for Worcester’s street dogs, abused dogs and dumped dogs. Who would have guessed that things would have turned out so well for our city’s much-maligned pitbulls and other forgotten dogs?

Things have changed in Worcester when it comes to our homeless dogs. Today most of Worcester’s inner-city stray/picked-up pups and pooches are now taken to Barton Brook to be quarantined, vaccinated, housed and put up for adoption. Pat got the city contract for caring for Worcester’s strays/pickups after the Worcester Animal Rescue League refused to do business with the City of Worcester. They cut their ties to Worcester to protest the city’s recent pitbull ordinance.

But an oh-oh moment became an aaahaaa moment for Worcester and its homeless dogs! The dogs have made out wonderfully at Barton Brook. The love, care and exercise they get from Pat – in a country setting, no less – is totally therapeutic for them.

During the two afternoons this reporter spent at Barton Brook, touring the facility, talking with Pat and meeting all the dogs, she saw happy pooches galore (Pat has about 25 or so) – pups and dogs who can’t stop waggin’ their tails!

“It’s been great,” Pat says. “It’s been a great experience,” says Pat who has always loved dogs and has been the Leicester Dog Officer for a number of years. She also has a horse and pony at Barton Brook where she and her family live, adding that she is never more than several yards away from the dogs as she lives right there on the kennel/farm.

Pat says she has been pleasantly surprised at Worcester’s commitment to its homeless dogs. The city has paid for emergency visits to Tufts and other area veterinarians for special vet care for some dogs (broken legs, etc) before Pat gets them. She vaccinates them, gets them evaluated by a dog behaviorist and takes them to a vet to be spayed or neutered.The adoption fee of a dog ranges from $175 to $275. Not bad for a pooch that is all set to go.

“It’s about stabilization,” Pat says, noting that once dogs are deemed healthy she and her family and volunteers work hard to socialize it. The dogs are exposed to children (her little grandson), men, women, bikes, tricycles, etc. “That’s our goal – to see them interacting” with people, Pat says.

It’s great walking around the grounds with Pat. She and her daughter know all the dogs – and the dogs know and love the women. The pooches come running when called, jump up for hugs and pats – and treats. Pat takes out a husky found in Worcester and gives him a treat and a hug and a kiss. She stops by the pen holding the little dogs and lets them out into the gated yard where they run, run, run – a trio of lively happy critters!

She stops at an outdoor kennel where a big pitbull and smaller dog are hanging out. “This [pitbull] is my Big Daddy,” Pat says, indicating that this Worcester pitbull has such a calm and balanced temperament that she uses him to calm other dogs down – just like the Dog Whisperer Cesa Milan uses his big pit “Big Daddy” as a therapy dog for the unbalanced dogs he has to rehabilitate. A few minutes with the big handsome guy and you see his easy going temperament. He is so gentle, this big pitbull. And he grows more loving by the day living at Barton Brook.

You almost hate to see him get adopted!

“Three of our dogs have been adopted by NEADS,” Pat says. They will be trained to help people with disabilities.

Pat is as committed to Worcester and Worcester dogs as WARL was. We know our city’s canines are in loving and capable hands.

Fetch a dog from a shelter this October

Walk into almost any animal shelter, and you’ll see row after row of homeless dogs with wagging tails and pleading eyes, their wet noses jammed between the cage bars as if to say, “Pick me, pick me!” All of them—purebreds and mutts alike—are desperate for attention, for love and for someone to take them home.

October is “Adopt a Shelter Dog” Month, and for people who have the time, patience, money, energy and love needed to care for an animal, there has never been a better time to take home a grateful dog awaiting adoption at the local animal shelter. END_OF_DOCUMENT_TOKEN_TO_BE_REPLACED

Worcester Animal Rescue League’s Dorreen LaPorte was driving in the Webster Square area last summer when she saw something that broke her heart: a young pit bull dog – younger than 1 year – was straining to pull three gray cinder blocks in the summer heat. The cinder blocks (weighing about 45 pounds each) were attached to three heavy chains and the chains were attached to the dog’s collar. Pit bulls are – believe it or not – crazy about people! They were bred to bait bulls and later used to fight dogs. Without their desire to please their masters, they could not endure the insanity of the bloody dog-fighting pit or tortured bulls. Also, a less sociable dog woud not allow himself to be extricated (by his master) from the pit, in the middle of a fight. (Hence, the relatively light weight of the turn-of-the-20th century pit bull dogs – 45ish pounds).

Combine the pit bull’s fierce loyalty, love of their master/mistress, innate intelligence, stamina and steely will and you have the scene LaPorte witnessed: a pit bull on Webster Square, who when his owner says “mush,” mushes. In 90-degree weather. All heart . LaPorte, who has been the executive director of WARL for more than 10 years, knew what the owner was doing – training his pit bull for dog fights.
“There’s a [pit bull fighting] dog ring on Southbridge Street,” LaPorte says. She has called the Worcester Animal Control Officers – and their bosses – and they have done nothing about breaking up the ring and rescuing the dogs. LaPorte believes there are “multiple” dog fighting rings in Worcester. END_OF_DOCUMENT_TOKEN_TO_BE_REPLACED