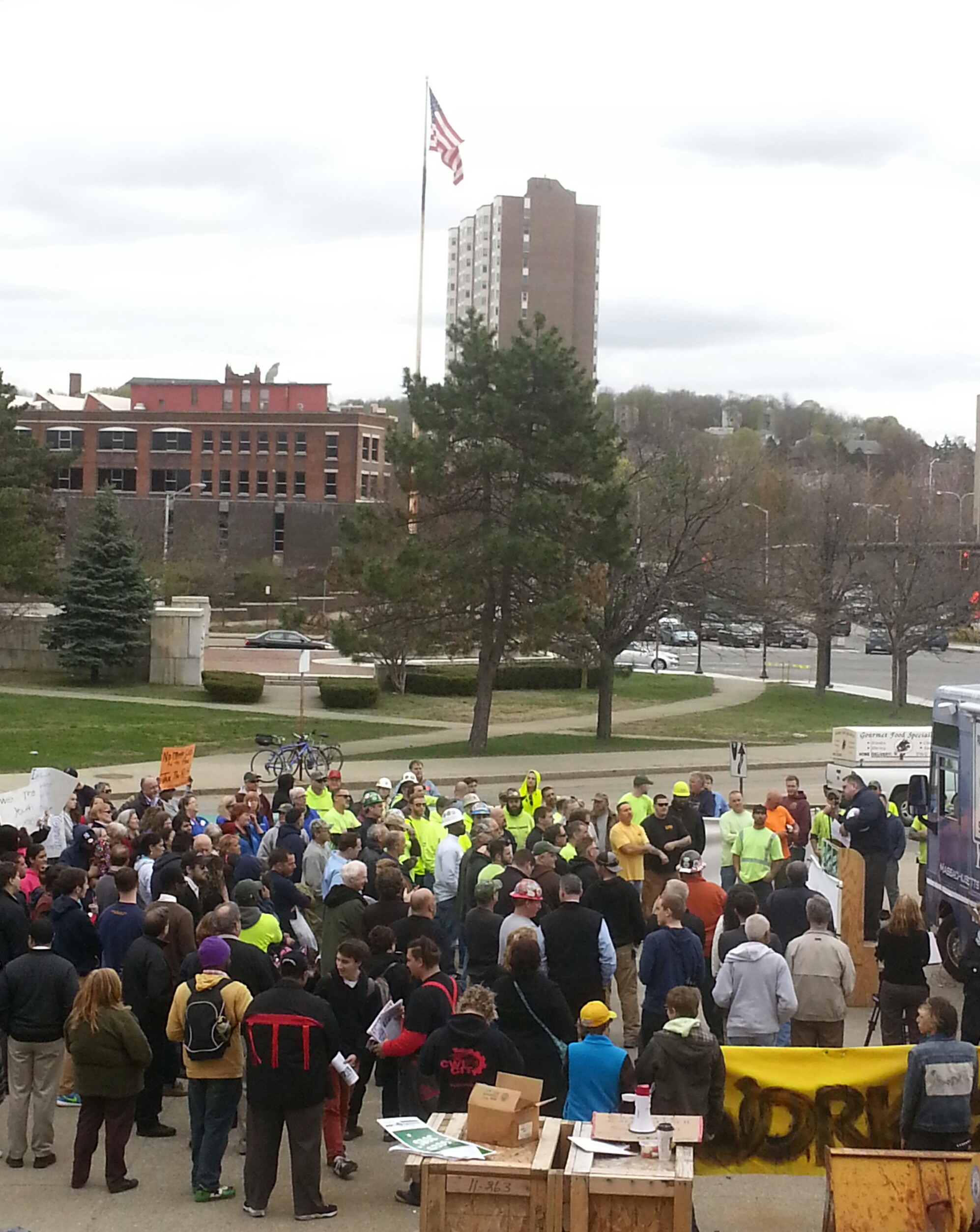 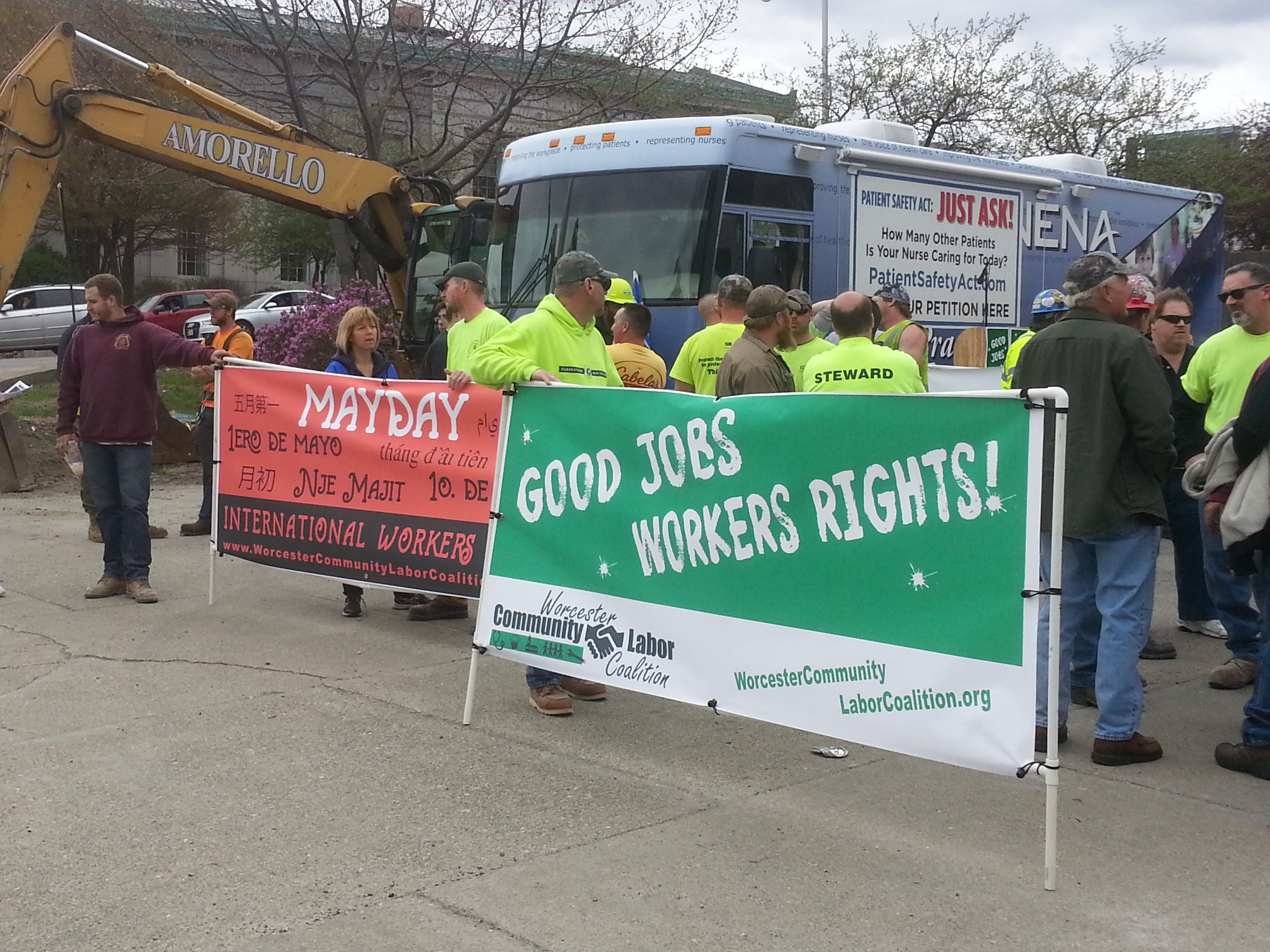 The Worcester Community Labor Coalition held May Day on the steps of the old Worcester Auditorium (AUD) yesterday, May 1.

The organizers said the celebration of the International Workers’ Day was intended to ensure good jobs for the City of Worcester.

A Clark University student said he and other Clark students were chanting before the rally about police brutality from Ferguson to Worcester. He said one of the union organizers told the group to stop the chant. He, according to the Clark student, said the issues of jobs and police brutality were not connected.  There was some disagreement on this issue, as a few people at the rally held signs saying “Jobs – Yes, Racists cops – No!”

The organizers of the rally hoped the event would put pressure on city officials to make sure the jobs created by the former Worcester County Court House project would go to Worcester workers.

The first is the City of Worcester may have bought a pig in a poke.

without a purchase and sales agreement

without a Community Benefits Agreement.

It seemed like all of the Worcester City Councillors know this is bad business practice.

Councillor Gary Rosen would not say whether he was happy or unhappy with the lack of transparency and the lack of documentation provided to the city council and to the public prior to last’s night vote.  Despite his ignorance on the issue, Rosen voted to approve of the Brady Sullivan “deal.”  He did say he wanted a good deal.

What does that mean?

Councillor George Russell also wanted a good deal. He at least gave a straight answer: He said he thought the way Worcester City Manager Ed Augustus excluded the Worcester City Council in the negotiations  in a timely manner was not appropriate. He said information should have been provided by the City Manager before the City Manager made public the  “understandings”  with Brady Sullivan.

Kyhristian King, a candidate for Worcester City Councillor, showed the same caution as did Mr. Rosen. He wanted a good deal, but he would not say if he was unhappy with the transparency of the City Manager in the negotiations.

The head of the Worcester Chamber of Commerce and former Lieutenant Governor Timothy Murray said he also wanted a good deal with Brady Sullivan. He wanted Worcester residents to get at least fifty percent of the jobs. However, he said because no public money was involved the City could not make obligatory legal demands on Brady Sullivan.

THERE IS PUBLIC MONEY: thr city got MILLIONS $$$$ of public funds FOR REMEDIAL WORK ON THE SITE!

So what is the real deal today?

There is no written agreement that is legally enforceable on the issues of taxes, employment, mitigation of adverse changes to the neighborhood, or even a purchase and sale agreement. There is only a pig in the poke.

Especially disappointing is Worcester City Councillor Konnie Lukes who used to pride herself as a fiscal conservative and a watch dog for the public.  She is also a lawyer who understands good business practice. In the matter of Brady Sullivan, Councillor Lukes endorsed the worse business practice of selling without a purchase and sale agreement. Lukes used to slam former Worcester mayors for their lack of transparency; now she is silent on that issue. She also last night brow beat the mayor and officials for being open to including the labor Coalition when other city development projects are up for consideration. It seems Lukes, 73, and with decades on the city council and school committee, is running out of gas. She is a shadow of  her previous due diligence self.

For decades the City of Worcester has looked for the Holy Grail of development. It has gone through several iterations of the Worcester Commons Outlet. It has built a poorly designed Union Station that Amtrak did not want and that is losing money. There have been several changes to the plans for City Square, and it seems that this might be a money loser as well.

No one can say for sure how the old Court House project will turn out.

There are not documents to analyze.

So I choose to focus on other stuff…Checked in with the OIF yesterday to see how my CD storage box was coming along. The OIF wanted to sand, prime etc the old tool box before he spray painted it. I said: JUST DO IT. He tested the paint yesterday.

I was all for blue, but I like the way the green looks! It’s fresh! It’s spring! 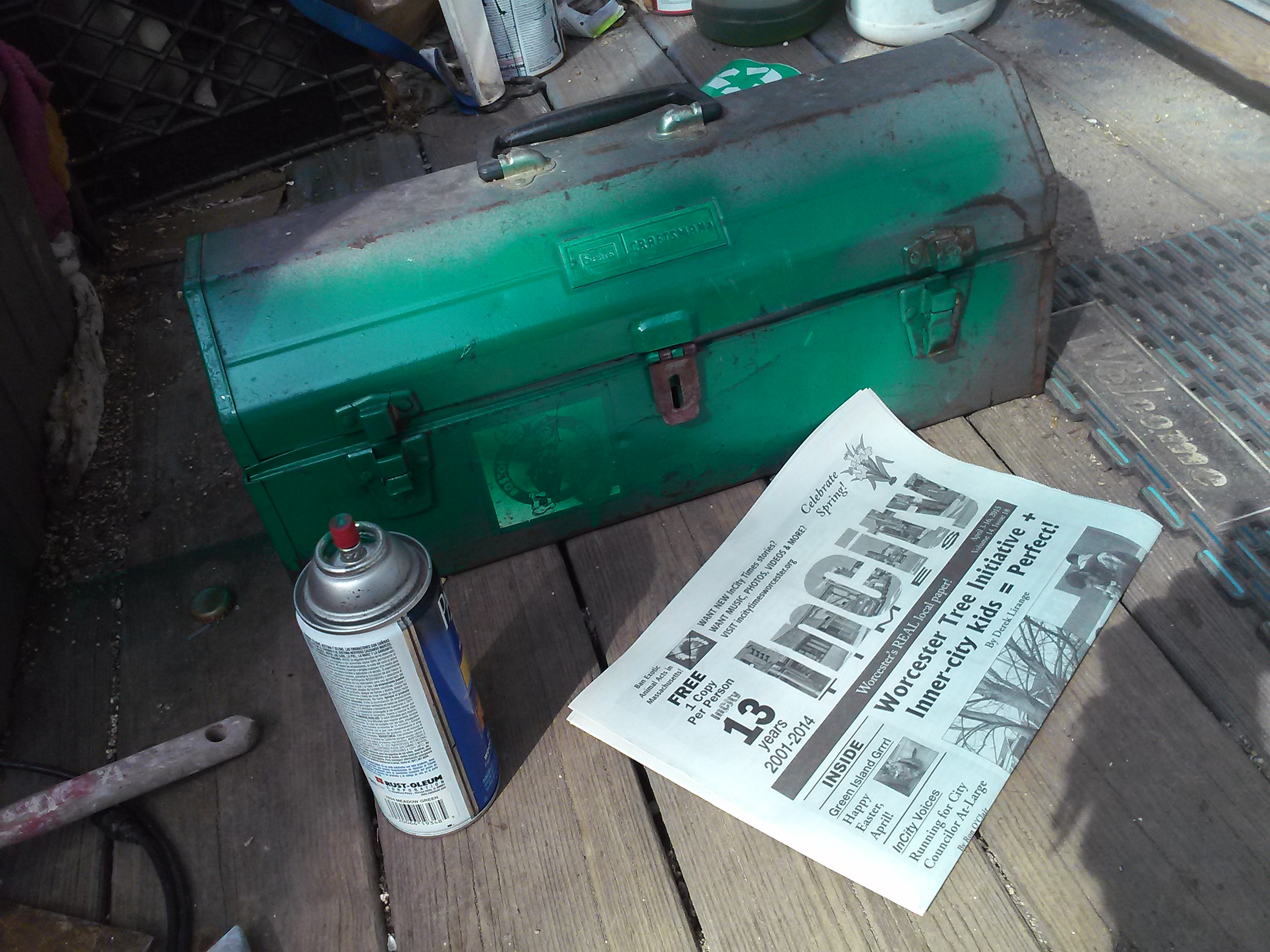 I’m a blue-collar gal through and through. As working class as you can get!

I grew up working class/poor in Worcester’s Green Island neighborhood. My beloved Polish grandfather worked his whole life in the Dudley textile mills, PROUDLY joining the union there; my mother worked 6O!! hours a week at the old Oscar’s Cleaners on Millbury Street – a dry cleaners. For minimum wage, courtesy of cheapskates, the ASADOURIAN FAMILY, her whole life! EXPLOITED to the max.

I grew up around construction guys, day laborers. Exploited too.

My grandfather was an excellent carpenter, building this huge porch swing  for my Bapy, which proudly swung on our Lafayette Street front porch for years… He was always making things… stools, benches, even tin cups…

For five years I went out with the Old Injun Fighter (OIF) a contractor/ handyman/ carpenter who loved doing “finish work,” could put a porch on a house, put in a bathroom, and, yes, build a little home, if he needed to. He’s from blue collar Lynn, where his dad worked in the leather factories there. (His mother was a photographer for one of the city’s department stores. She was artistic, beautiful, mercurial/crazy … and ahead of her time…)

I put out InCity Times, which requires a lot of blue color LOCOMOTION! Such as delivering thousands of ICT newspapers every two weeks, running around selling ads, dealing with printing guys, knowing about skids, and lifts, and using your back the right way.

AS FAR AS WCLC AND ITS REQUESTS OF THE CITY of Worcester, REGARDING THE LABOR AT THE OLD COURTHOUSE and Brady Sullivan developers from New Hampshire I say:

Because, and I speak from experience/ a deep knowledge:

Lots of developers and contractors EXPLOIT workers. If they can get a borderline homeless neighborhood guy to do grunt construction work for $8 or ten bucks an hour, they will. The guy may have a drinking problem, he may collect social security disability, he may even have a drug problem.  Still … he is a body to exploit, someone to haul crap away, dig holes…He is dispensable. He is a sitting duck. HE WILL SAY YES. THIS ENABLES THE CONTRACTOR to save a TON of money by not going with a reputable shop that pays its laborers around 20 bucks an hour and its professional carpenters, bricklayers, etc even more $$$$.

CONTRACTORS HATE PAYING workers compensation.  It’s expensive.  The OIF will do it BECAUSE IT’S THE LAW AND IF CAUGHT BREAKING THE LAW HE WILL HAVE TO STOP WORK AND PAY A FINE, BUT HE HATES IT. If contractors can wiggle around the law, and not get caught, many will. TOUGH LUCK TO THE WORKER WHO FALLS OFF A ROOF AND BREAKS A LEG or trips on a cable and slips in the mud and cracks his head or drowns in the mud as a huge hole, without proper supports, fills up.

Which leads me to my next point … Construction worker is THE MOST DANGEROUS JOB THERE IS.

Not firefighter, not cops, BUT CONSTRUCTION WORKER.  Hundreds die or are critically injured every year.

CONTRACTORS often hire illegal immigrants and exploit these fearful folks TO THE MAX. SOMETIMES ITS CLOSE TO SLAVE LABOR. This allows them to undercut legit shops and get the job…2. make more $$$. Contractors love to make money!

Several times in Worcester, at the GREENWOOD STREET PRICE CHOPPER supermarket, later at night, I saw several contractors in their vans coming out with wagons full of groceries. One guy: HE OPENED THE VAN BACK DOOR. I saw a huge group of laborers inside the van sitting on their haunches – they were dark skinned…They took the food.  He slammed the door. I WAS MORTIFIED.

Slave labor. Does anyone NOT believe this still goes in?? … here, too?

WHEN CONTRACTORS HIRE AND EXPLOIT ILLEGAL IMMIGRANTS THEY CHARGE the developer/customer as much as ONE THIRD TO A HALF less $$$ than a legit contractor who is FOLLOWING THE LAWS AND PAYING INTO WORKERS COMP, PAYING a living wage etc. does.

This gets them the job because their labor costs hit rock bottom, which they pass on to their customers. They undercut the union shops following the rules, paying their guys living wages.

The groups that are trying to educate WORCESTER CITY COUNCILORS, people like JACK DONAHUE OF THE CARPENTERS UNION, are not making stuff up.

They know, hands on, just how rotten things can be.

They are not commie lowlife hipsters trying to undermine America.

They are good family men, good standing members of the community. They live in Worcester and want what’s best for her.

THEY ARE FIGHTING FOR AMERICA AND THE AMERICAN WAY. (Not unlike Superman!)

We, as a city, need to develop the Worcester Courthouse, but NOT AT THE EXPENSE OF THE WORCESTER WORKER, LABOR LAWS, GOOD WAGES, A SAFE WORK SITE. The courthouse is a gem in a great safe Worcester neighborhood. The Worcester Art museum, Institute Park, WPI, the Worcester Historical Museum’s mansion are all in this great neighborhood. THERE WILL BE OTHER DEVELOPERS, if Brady Sullivan walks away. WE JUST NEED TO MARKET THE BUILDING WITH THE NEIGHBORHOOD and DO IT AGGRESSIVELY!

The carpenters union guys are GOOD GUYS supporting the American right to work safely and legally at a work site while MAKING A LIVING WAGE.

Worcester city councilors Ric Rushton, Joe Petty, George Russell, Phil Palmieri, Konnie Lukes, Tony Economou and colleagues must RESPECT where Donahue and his colleagues are coming from. BECAUSE THEY ARE SPEAKING TRUTH TO $$$/POWER.