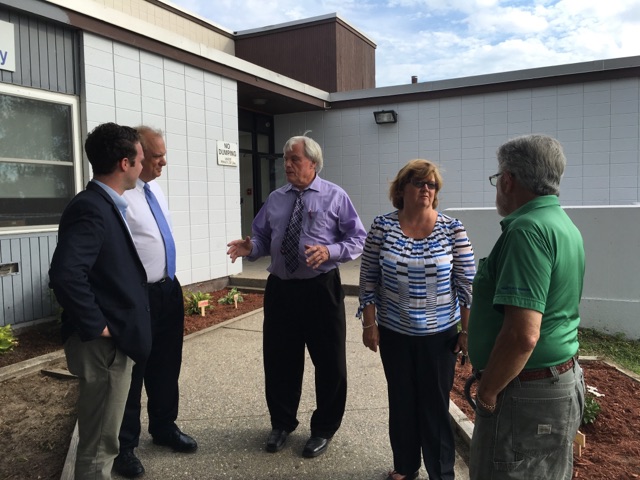 Joe Petty, the mayor of Worcester, walked the Wall Street neighborhood yesterday with city officials, District 2 City Councilor Candy Mero-Carlson and neighborhood folks. He visited the Friendly House, Westerman’s, Grafton Street School and more. One of the stops on his walk was the empty lot that used to be the El Morocco Restaurant. The lot sits on high ground with a terrific view of the Worcester skyline.

Longtime director of Friendly House, Gordon Hargrove, felt that some of the units will eventually become affordable units.

Mr. Hargrove is working closely with the developer to ensure some additional benefit to the neighborhood. He indicated that the project would include upgrades to the Shale Street School playground.

The Mayor and developer showed a schematic of the building layout. However, the developer saidthe final project would look different than what was on the schematic. He did not have a copy of the revisions.

Like Mr. Hargrove, the Mayor felt that the housing units would help the neighborhood and the city.

The streets in the neighborhood are narrow, as most of the streets on the East Side were built well over 100 years ago. There might be some concerns about traffic and parking. For planners one and one-half cars per unit is considered standard.

Another concern expressed was how many children would live in the project and where they would go to school. An employee at Grafton Street School, only two blocks away, said the school was at capacity.

She also said Grafton Street School is the oldest functioning school building in the Worcester School District. There are some renovations going on at the school today, including a new boiler, windows and an elevator for people with physical handicaps.

During the walk City Manager Edward Augustus asked a DPW employee how often the storm drains were cleaned on this street, as he pointed to a clogged drain. The DPW worker said his department cleans the drains.

The walk ended on an interesting note – at Westerman’s, a vendor in Worcester that provides props for local movies. Included in props was the Teddy Bear from the movies “Ted” and Ted2”! 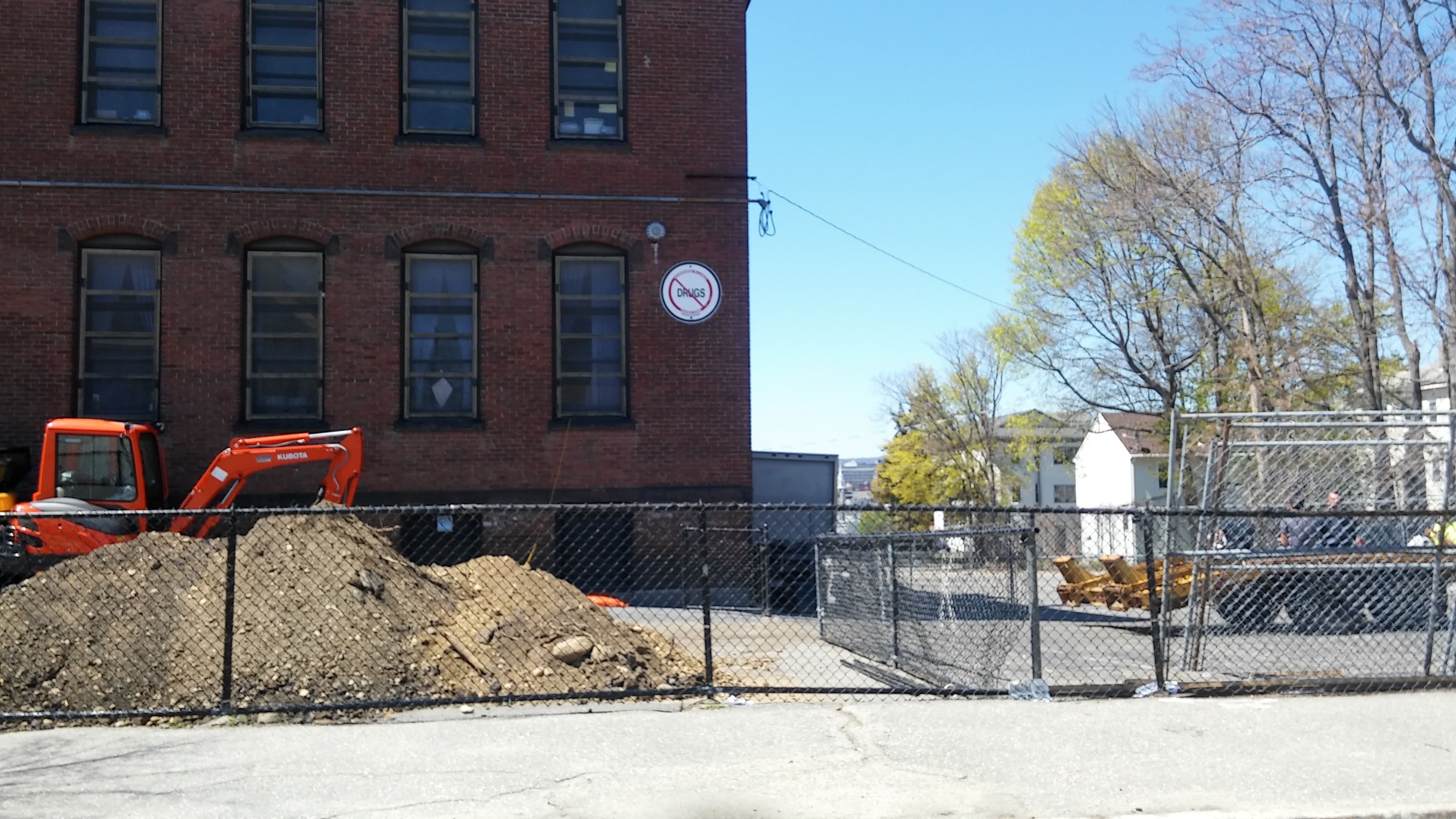 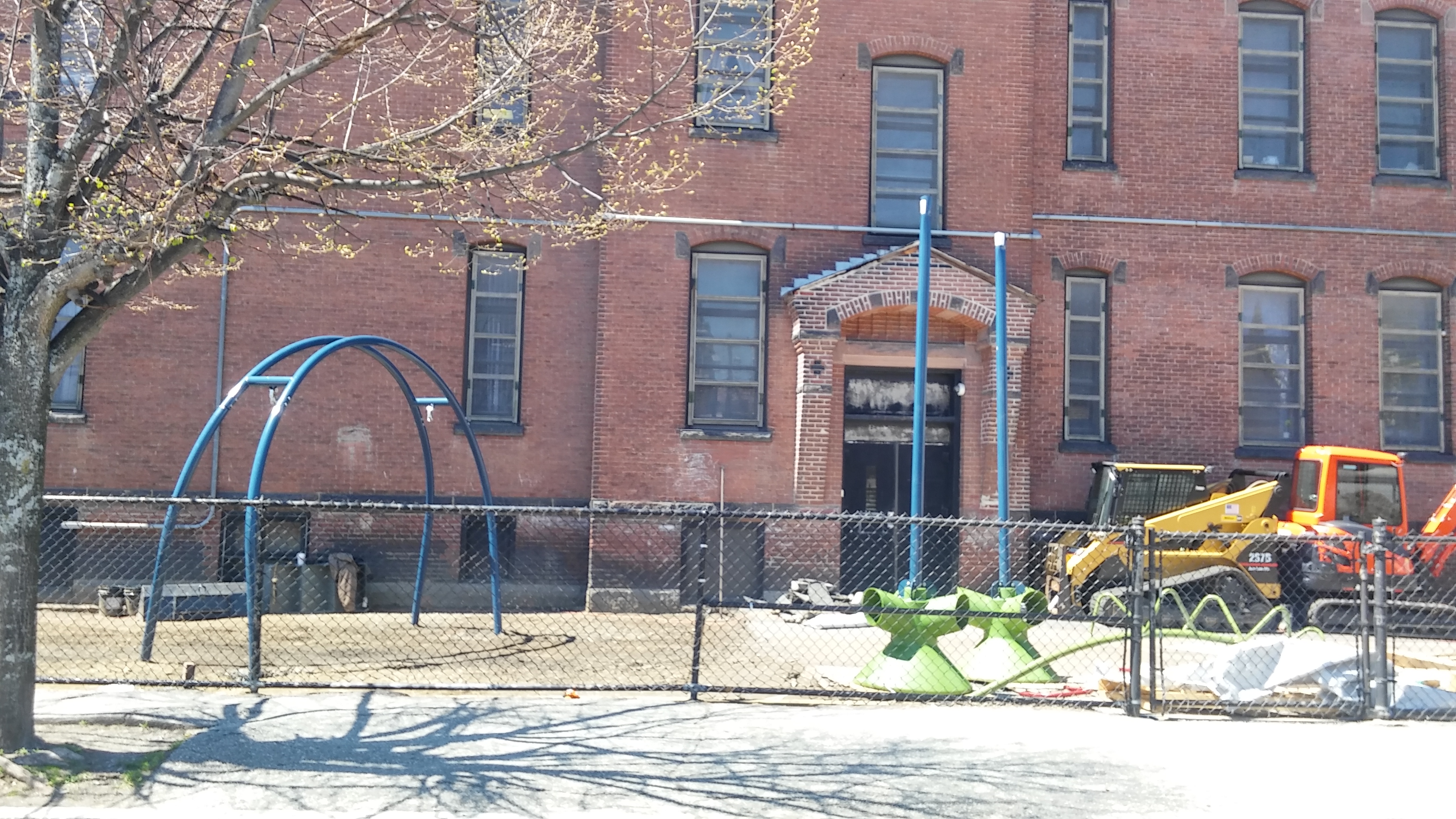 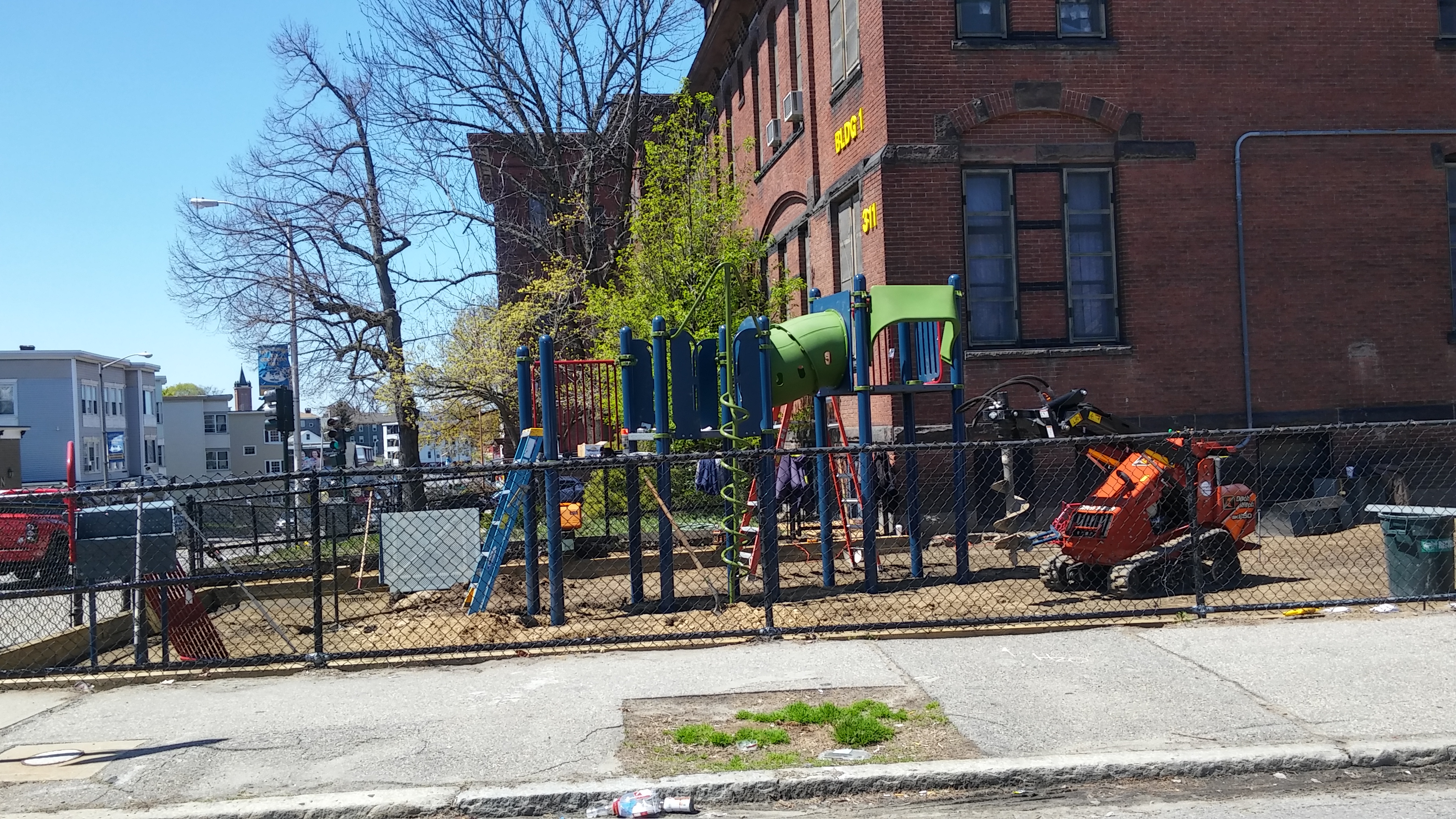 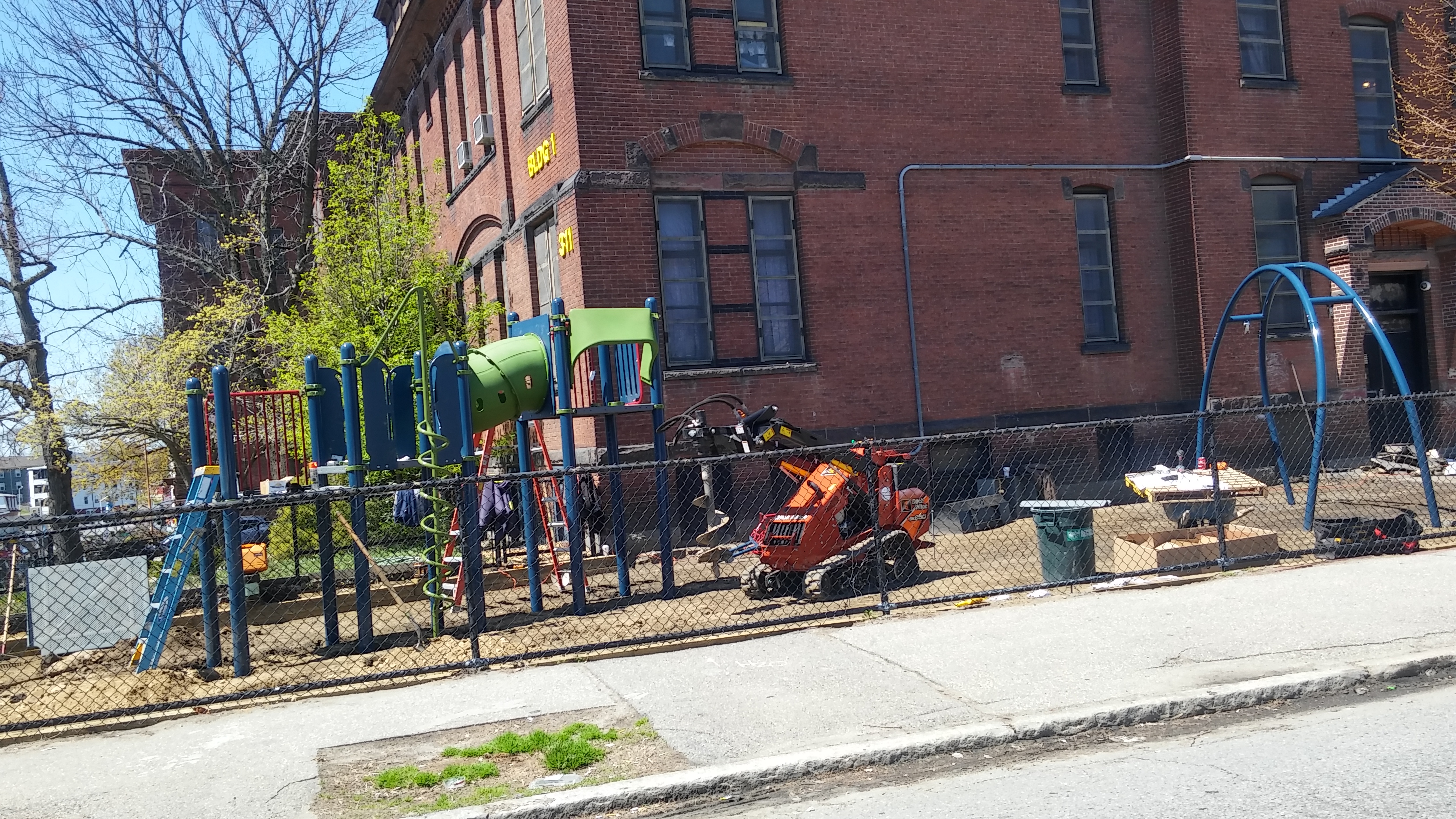 Yay, Steve Teasdale and the Main South CDC!!!! For investing in Main South when no one cared!!! Below: Beacon Street. 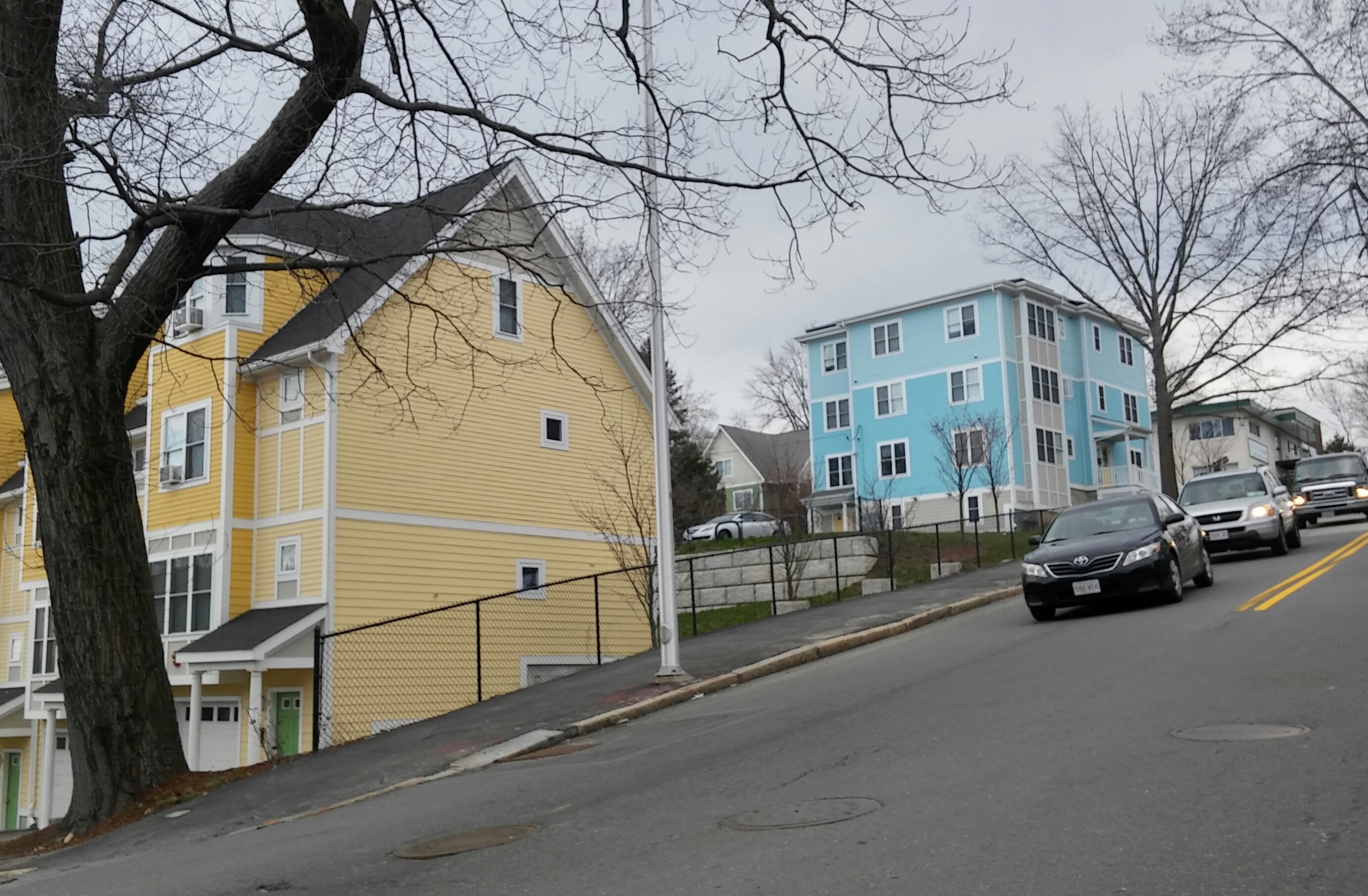 … isn’t running for state rep again. In a few weeks I’m still gonna vote for him, write his name and Dolly Drive address on the ballot. Why? Because Fresolo IS the 16th Worcester District! I think I speak for a lot of folks in the 16th when I say FRESOLO DID A SPECTACULAR JOB as our state rep. He brought the money in for street and sidewalk renewal, for senior housing, for fire and police protection, for economic development, for historic sites, for safe streets. Fresolo fought the crime and grime and creeps that desecrated so many neighborhoods in our district. Most significantly, the Union Hill neighborhood, home to so much crime and foreclosures the City of Worcester has installed special police task forces there. Fresolo’s mom lives in the neighborhood. Her three decker was shot up a few years ago. Bullets be damned! Mrs. Fresolo still lives in her beloved home.

When I think of John, I think of a very direct, gritty, no bull shit kinda guy. He has never been one to polish down the rough parts of his personality. I like that. With Fresolo, what you saw was what you got. He didn’t parse his words, he didn’t act like he was coached or handled. If John were still representing us, you can bet your sweet ass the containers being plunked on Greenwood Street or the slots casino being plunked just over the line in Millbury would be doing less damage to the Quinsig Village hood, my beloved neighborhood.

John kept his constituents’ goals at the forefront because they were his goals: safe, clean, user friendly blue collar neighborhoods. Places where schools and families and small businesses could thrive. He worked hard on the 146 Mass Pike connector project. He worked hand in hand with the biz folks in the Canal District. He was always there for Sue Moynagh and her crime watch groups. And the Mayor of Green Island, Lorraine Laurie, adored him She still does. Everyone in the 16th Worcester district liked the hardworking Fresolo.

When the news came out about the per diem mileage problems but, more important, the John Thomas pics that Fresolo allegedly emailed/sent to some State House staffers, I thought, Yeah, he did something a little “nutty” – pun intended – but if she’s 18 or older, it’s legal AND it takes two to tango.

I called Fresolo and left a message on his voicemail: I would stick this out. I would not quit. I would hire myself a great lawyer and fight this. Your constituents love you. You WILL get reelected.

I guess he figured the thrashing he’d get in the T and G and the news stations would be brutal. Yes. Fresolo, because he is Italian American and not Irish American and because he tends to be more socially conservative than his Worcester peers, would be standing alone, naked. No fun. And because he has gotten treated much more roughly when he’s screwed up, as opposed to the Irish politicians in town when they have fucked up royally, Fresolo decided to call it a career.

So now we have boys running for his job. Both kids, Perro and Donahue, seem to lead the very big pack. Donahue because he has the Murray, Petty, union machine behind him. Perro, who despite his family’s sketchy car business on Harding Street (drugs found in the cars), hopes his family’s flower biz and Italian surname and money catapults him to a win. Both kids seem unimpressive. Fresolo would annihilate them in an election. Why? Because he was outstanding on the issues, worked like a dog for his district and had charisma. These two kids couldn’t light anybody’s fire.

As the old saying goes, Don’t send boys in to do a man’s job.

Fresolo was our man. Interesting, hot tempered, passionate, sexy. Stuff like that can get you into trouble sometimes. But hey, if he were still in the race, he would be running for office the same time Anthony Weiner and Eliot Spitzer are trying to woo New York City voters.

I say, we need to act more Parisian. In Paris, everyone, even little kids, know relationships are complicated. Husbands have mistresses. Wives have lovers. The political theatre in Paris is filled with men who behave … the way they want to. They marry their women. They live with their women. The electorate there seems to go with the flow as long as the elected officials are progressive, cool.

What’s good enough for the most fabulous city on earth should be good enough for rinky dinky Worcester. After all, it was only John’s winky! It’s not like he was anti jobs or anti small business or anti old people, a group of folks he’s done wonders for, as in the Ascension Heights Senior Housing Complex.

Fresolo was great for District 16. Hopefully, he’ll realize that sooner than later and run for his seat next election cycle. He’d trounce the incumbent. Any incumbent.

It is disheartening. L.G. Tim Murray wants more commuter trains coming to Worcester. He’s been harping on this for years. All the yuppies in the Canal District agree with Timmy because they, like Murray and Green Island carpet bagger Allen Fletcher, have rich fantasy lives! Boston artists jumping on the train to fly to Worcester! Worcester artists hoppin’ on the train to zip to Boston! Thousands of ideas cross-pollinating! Money flowing into Worcester. And the dream streams on … .

But getting what he wants from CSX has been tough: Murray and pals have been working on making Worcester a true suburb of Boston for years!!! Usually to no avail!

So, what finally happens? CSX says “yes” to more commuter trains for Worcester IF (and only IF) they can turn the bottom of Grafton Hill into their own personal toilet: a huge freight yard. Doubling the size of what’s already there! Which, for the Grafton Street folks, means: Lots more freight trains, lots more noise, lots more pollution, lots more ugliness.

For what? More commuter trains? Some fantasty of hundreds of people from Boston and Worcester riding into each other’s cities for art/work? Come on! We will never have that kind of exchange – the kind of exchange TRUE suburbs of Boston have with Beantown.

Illusion #1: More Boston folks coming to Worcester for less expensive housing and then commuting to Boston to their regular jobs.

These folks are in the minority!! My sister did the opposite for years – lived in Worcester and commuted to her job in Boston. Exhausting. After an 8 or 9 hour day, it was a drag to spend 45 minutes to an hour getting home. And let’s not forget the almost 1-hour commute to work in the morning! Not a whole lot of Worcesterites did this back then. I can’t imagine thousands doing it now. A few yuppies? Maybe. But hundreds of worker bees, like my sis? No way. The 5-day-work-week commute is simply too exhausting/time consuming.

Let’s remember: Most Bostonians do not want to leave their cool nest in Boston for digs in Worcester. They may make the transition only if they can trade in their Boston condo for a real house in Worcester (costs way less $$ than house in Metro Boston). But then again, there is the extra two hours (a day) to be tacked on to EVERY WORK day. No fun.

Oh, but that’s gonna work out, everything is OK because CSX is giving the City of Worcester more than $20 million in “mitigation” dough and $1 for every train that rolls into Worcester (this is forever).

We agree with District 4 City Councilor Barbara Haller: Things are challenging for Worcester in these tough economic times, and any new partner/partnership is welcome. Especially a relationship with a deep-pocketed partner such as CSX.

But come on, folks! We are dumping on a working class neighborhood! We don’t know how all this pollution is going to affect nearby workers/residents. We guess everyone and their mother will have asthma. Maybe cancer rates will rise.

The buck always rules. It is always poor/blue collar folks and neighborhoods who get dumped on (sometimes literally). What happened to the old Italian neighborhood in East Boston? Razed to make way for Logan Airport. Locally, what happened to the good folks of Quinsig Village who struggled for years to close the (some said toxic) landfill in their neighborhood? City officials, DPW head Bob Moylan and let’s-leave-my district-in-the-dirt District 3 City Councilor Paul Clancy allowed for the landfill to be reopened – reopened to TOXIC shit from Boston. For money, of course. Money that was to go to Quinsig Village – more mitigation dough, I guess. Yeah, there’s a playground built with the funds, but, the God only knows what’s in the landfill.

And, I guess, God only knows what’s in store (on the health front) for the people of lower Grafton Hill.

But, hey, the rich have always gambled with the lives of the poor.

As a life-long resident of the 16th Worcester District, Representative Fresolo shares the same priorities and values as his constituents: public safety, education, affordable housing, transportation and the protection of our children and elderly citizens.

In Fresolo’s tenure in the Legislature he has taken great pride in securing an additional $1 Million in community policing funds for the Union Hill, Vernon Hill, Grafton Hill, Quinsigamond Village and Green Island neighborhoods of Worcester. With this funding, the Worcester Police Department has been able to add much needed neighborhood foot patrols that have reduced illegal drug use, violent crimes and gang formation in the 16th Worcester District.