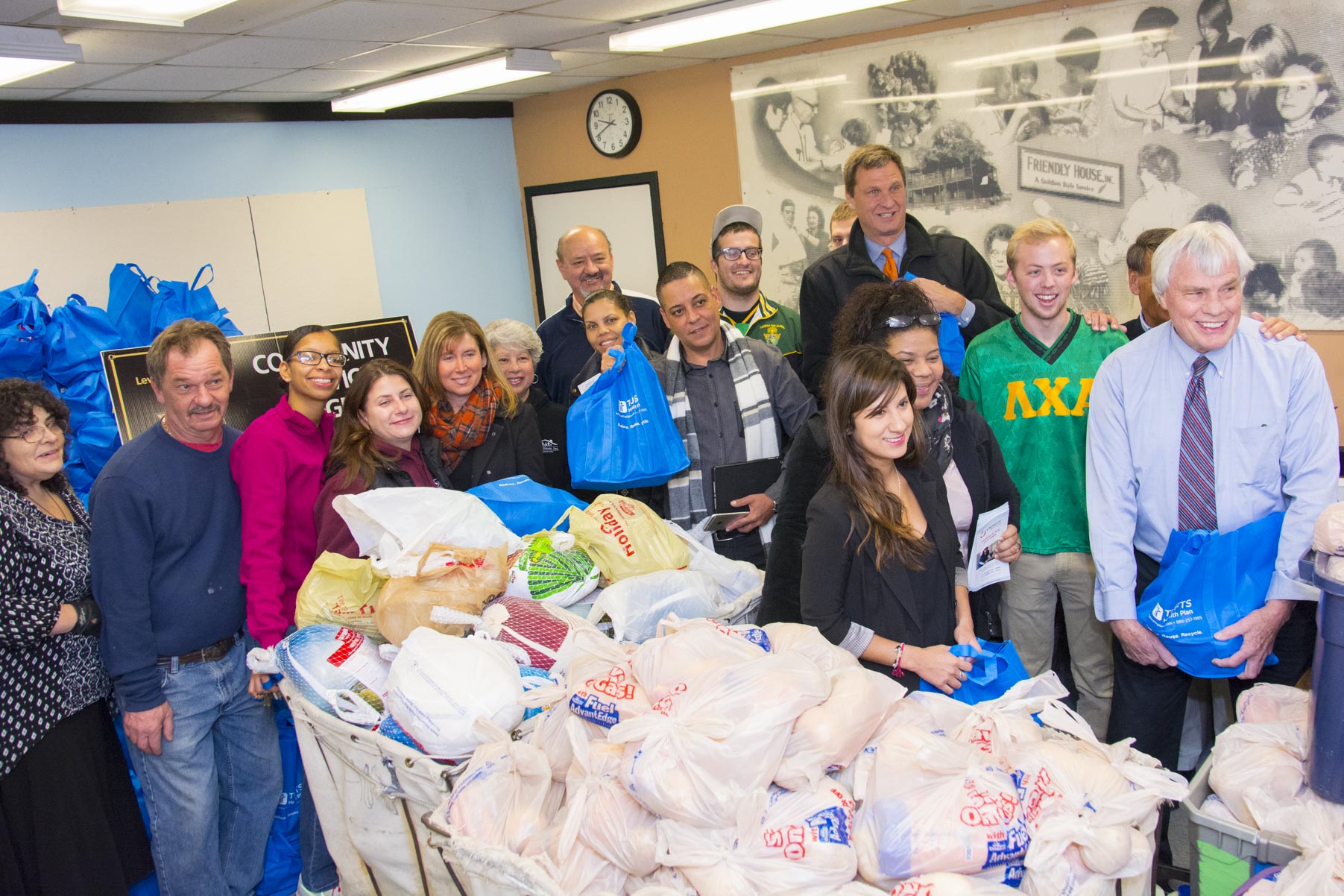 The Friendly House on Wall Street – a busy, giving place during the holidays!  photos: Elio Daci 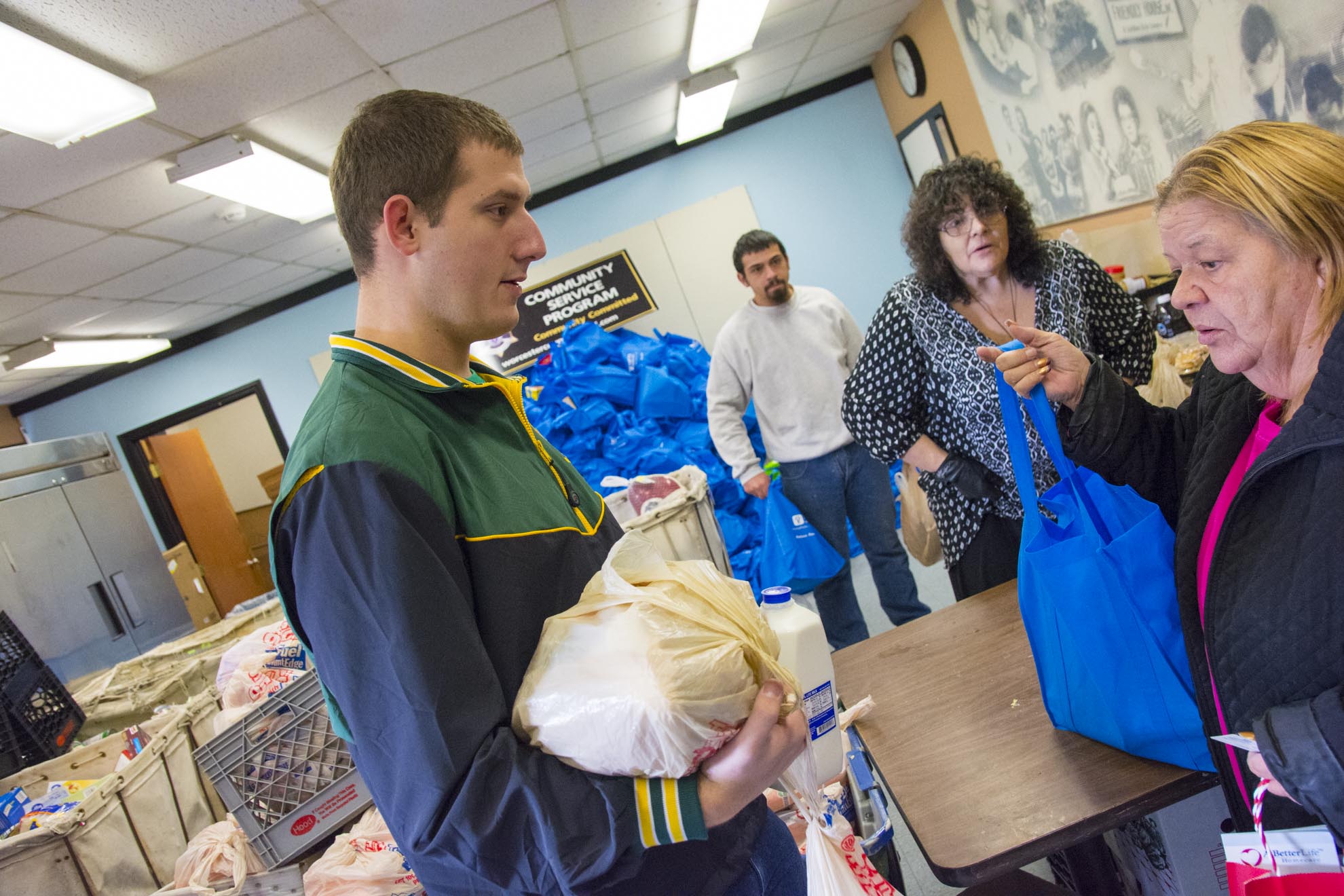 The students give out food packages at the Friendly House … Go, WPI, go!!!!!

It’s Thanksgiving Day! Most families look forward to spending time with their family over a warm, delicious Thanksgiving meal. Unfortunately, this is not a reality for many of our neighbors. Between heating costs, paying bills and other expenses, many people do not have the luxury of providing a holiday meal to their families.

These are the people who work hard, but cannot provide a full Thanksgiving meal to their families.

Luckily, we live in a community that is dedicated to helping alleviate this pressure for our neighbors. Over the past month, a Worcester Polytechnic Institute (WPI) fraternity, Lambda Chi Alpha, has worked with the Worcester County Sheriff’s office and the Friendly House of Worcester to make sure families who are struggling have a Thanksgiving meal. Our just completed food drive is part of an ongoing partnership that dates back 21 years! Over the course of this partnership, more than 2.3 million pounds of food have been collected for the Friendly House!

“Although most of us are only in Worcester for four years for college, we definitely become a part of the community,” says Elio Daci, the External Vice President of Lambda Chi Alpha at WPI. “We all want to make sure we leave this city a better place than we found it, and this is just one way we do that.”

A large portion of donations for the food drive actually comes from the fraternity’s major bag drop event. More than 10,000 bags are distributed to homes across Worcester and Shrewsbury, asking for residents to fill them with non-perishable food items. The following week, all of the donations are picked up.

“It is very rewarding to see all the
donations on people’s door steps, especially after you’ve spent so much time distributing the bags,”said Aaron Pepin, a brother of Lambda Chi Alpha. The fraternity prides itself on its ability to give back to Worcester, and this tradition will continue as long as the need exists. The work these young men do in the community is perfectly captured by Elio Daci: “We might not be changing the world, but we are definitely making a difference for a lot of families, and that is what it’s all about. That’s what makes it all worth it.” 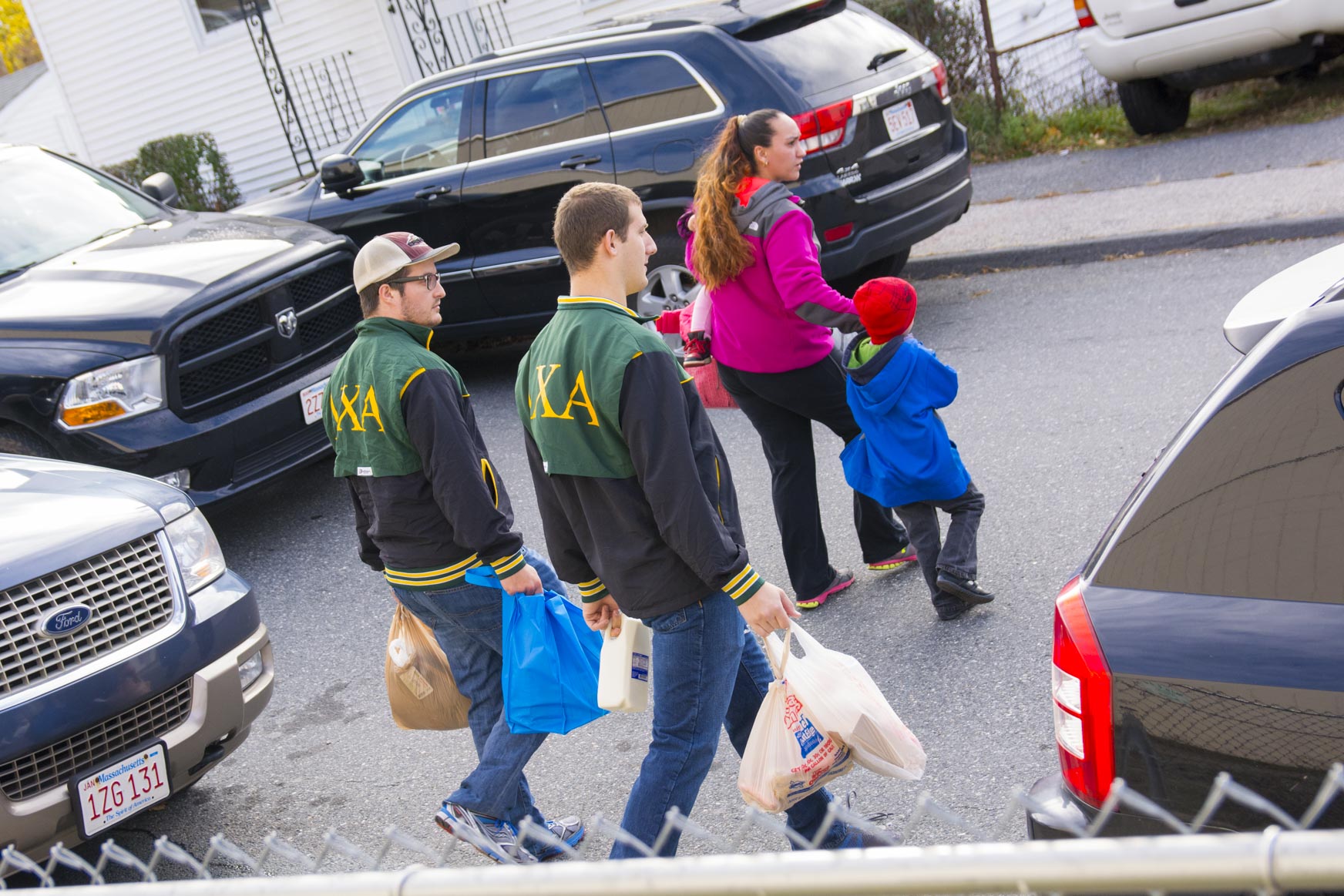 A few of the “brothers” carry the Thanksgiving groceries for a young mom. 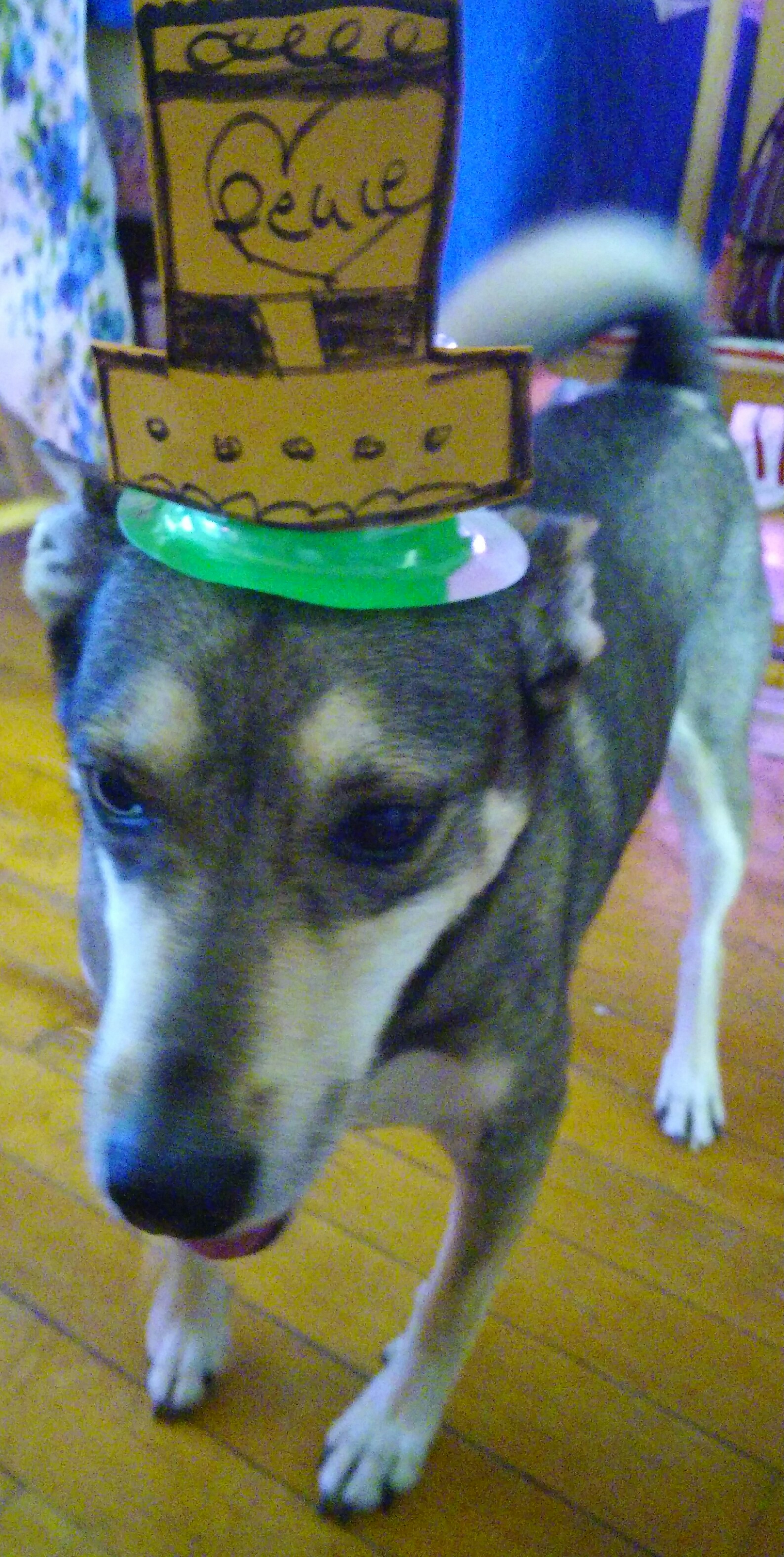 Jett’s wearing the little Pilgrim hat Rose “colored” and cut out for him yesterday. … Did you know Jett’s “breed” – “mountain feist” –  a mix of terrier, coyote and what have you – is an American dog, almost as old as America? They’re mentioned in texts written during the Civil War. They’re found  in Appalachia, bred for squirrel-huntin’. Jett’s originally from Kentucky. 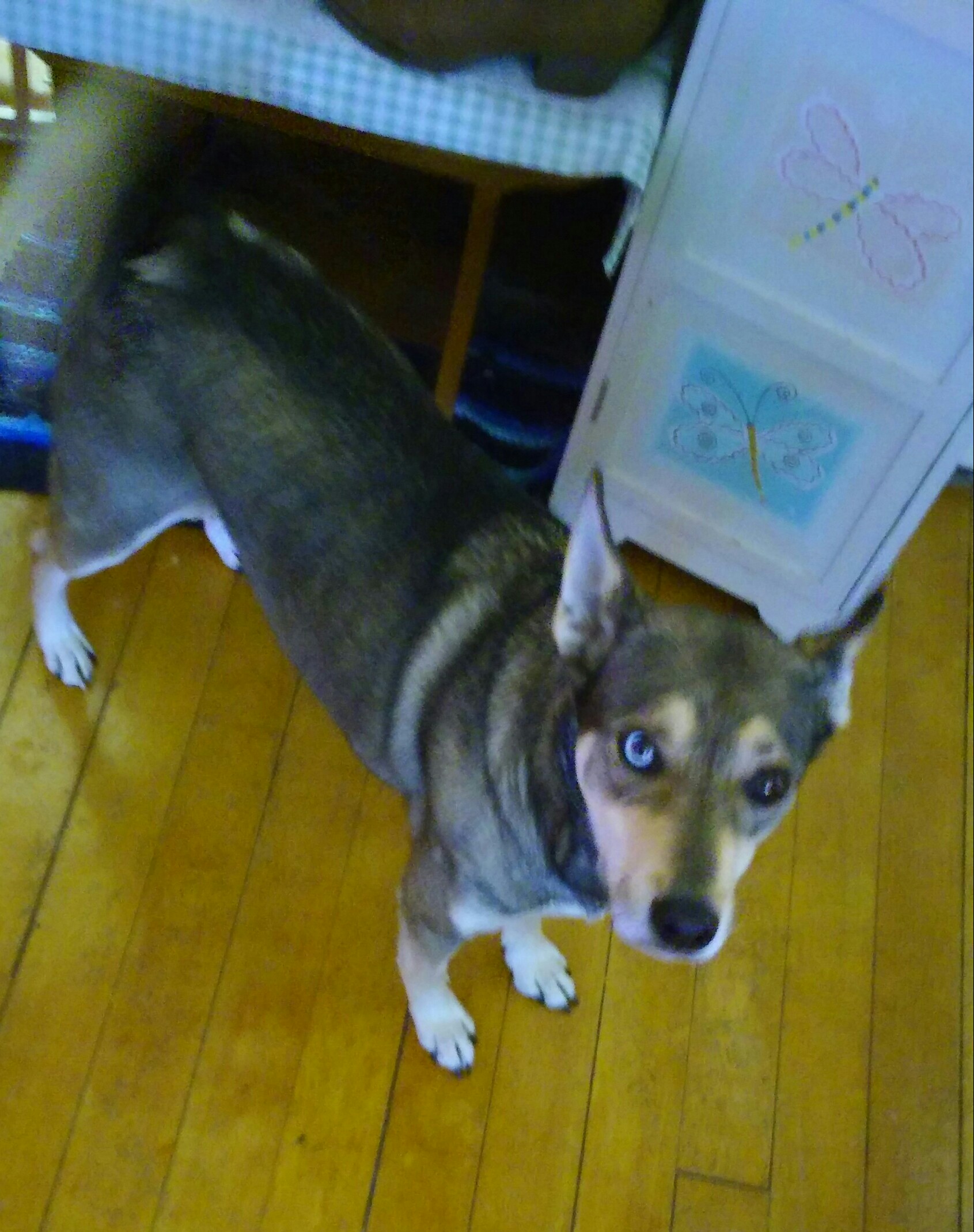 Well, it’s that time of year again – Thanksgiving Day – when we celebrate a lovely fall holiday that begins the three-week deadline for your final Holiday shopping. For me, it’s like the last 10 minutes on “Chopped.” The price of turkey alone makes me love this holiday, but it got me thinking about the 1600’s and what they really ate. Thanks to Google, I came up with some interesting tidbits and where many of our road names came from:

So the Original “Squanto” was from Patuxet like the Paw-sox, he was a Native American that with the Wampanoags taught the pilgrims how to catch eels and grow corn.  Squanto was the interpreter for them as he had learned the language when he was imprisoned in England.  The Wampanoag leader Massasoit (great name for a street!) gave food to the colonists during the first winter to help them out, as the supplies they brought were not sufficient for the New England winter.

So the following year of 1621, the planting, growing and cultivation was all supervised by the Indians and for three days after the harvest they celebrated.  The date is not known exactly but it was sometime between mid-September and mid-November.

It was not so much a “Thanksgiving” celebration but more if a harvest celebration with 50 pilgrims (out of 100 that landed!) and about 90 Native Americans guests. The food was prepared by four women who survived the first winter and their daughters, and had young boys and girls do the serving.

There are two personal written accounts about that day. William Bradford wrote that “Everyone had their houses and dwellings fit for winter now that they were well recovered in health and strength, and all had things in good plenty.”

He went on about the storage of dried fishes (cod, bass and other fish) that every house had equal portions for the winter as the summer as “there was no want”.  It was on to the fall to “store the foul,” as winter was approaching, and wild turkey was quite abundant at that time, and venison, with Indian corn as a backup.

This first harvest prompted many letters back to friends in England with these comforting reports.

The other was Edward Winslow who wrote “Our harvest being gotten in, our governor sent four men on fowling, that so we might after a special manner rejoice together after we had gathered the fruits of our labor.”. He went on to say “The greatest king Massasoit, with some ninety men, for whom three days we entertained and feasted, and they went our and killed five deer, shich brought back to the (plimouth) plantation and we bestowed on our governor, and upon the captain and others.”

So what did they eat?

Today’s menu is definitely different that of our forefathers and mothers! Green bean linda was not an option and onion strings were not invented.  According to the Plimouth Plantation historian Kathleen Shaw, I read in an article that “the first Thanksgiving,” there would be slimmer pickings. “Wildfowl was there. Corn, in grain form for bread or for porridge, was there. Venison was there these are absolutes.” She goes on to mention that turkey was not the centerpiece as it is today. Goose and duck were most likely on the menu in addition to the now extinct passenger pigeons that were once so thick, you could hear them for 15 minutes before you saw them.

It was said that a man could shoot the birds in flight and bring down 200. Swan was also on the menu and being New England clams, mussels and lobster were also consumed.  Stuffing was not quite the same sorry to say, but more of a fruit, nuts and maize (corn) stuffing used.  Onions and herbs, and perhaps an all chestnut stuffing.  Smaller birds were most likely roasted, and the bigger ones boiled, then roasted to finish them off.

The veggies were not used as they were a staple for the winter so the last of the fresh was finished off and root vegetables were kept for the winter.

Historians say that most likely all the birds were roasted on the first day and boiled for broth the next day, with grain added to make it thicker.

So not so sure that seafood would make a great change, but the Indians did have a few good meals they ate that were not necessarily animal protein. They respected the forests and killed game as needed.  They are Maize for sure but also “Succotash” – which is from the Narragansett sohquattahhash; meaning broken corn kernels.  Basically corn and shell beans – like lima or navy and whatever was available like green or red peppers, tomato was often added.  The combination of grains and legumes creates dishes in high in amino acids. Ironically, this had a resurgence during the Great Depression, as it is inexpensive and quite nutritious.  Often made as a casserole, and sometimes with a crust.

What you will need:

Heat oil in a large pan over medium heat, add onion and salt.

Sauté until soft and translucent (about 5 mins)

Add garlic until you can smell it.

Cover until everything is soft – about 25-30 minutes, stirring occasionally.

Just before serving mix in the basil.

This can be made ahead of time. Just reheat and add the basil before serving!