“Yes, this is Helen Wright. Now listen – you should have left your hair natural and highlighted it. Now this is motherly advice: A bleached blond will attract a man, but she will not keep him. … Your chances of getting a guy and hanging on to him will be better. This sounds like poppycock but it isn’t. Let’s not go the way of a fool.”

Ha! We’ve gotta be doing something right if we’ve sucked our readers in this deep! It means I’ve / my writing has moved ya, infuriated ya, intrigued ya. Yup. My readers read my column every issue and have become emotionally involved! Biggest compliment you can pay a writer!

Helen reads my columns and obviously saw my photo in our annual swimsuit issue. She decided: Rose’s man issues stem from a box of Nice ‘n’ Easy. Hmmmmm. Helen, perhaps you haven’t been reading my columns as closely as you should have?

This makes me think of the HBO tv show GIRLS. The masterpiece written and directed by 20-something Lena Dunham. First season was a miracle. Last season, second season, was not. Not many of the episodes rang true for me. Lena dumping the sexy brilliant animal Adam for a Republican? He only lasted a few episodes, but still … .

Even the comedy wasn’t as brilliant. I can think of no hilarious clips I want to share with you.

But I am gonna get a bit Helen Wright here:

One episode, ONE MAN’S TRASH, was intensely beautiful and you really felt for Hannah, the main character Lena plays, her alter ego.

In the episode, 24-year-old Hannah has a two-day affair with a gorgeous, 42-year-old, married doctor. He’s separated from his wife, Hannah learns after the fuck, but clearly our gal is swimming in uncharted seas.

All the scintillating writers at all the scintillating magazines wrote about the episode, as some kind of emotional watershed for Hannah – including the super tv gal critic at THE NEW YORKER. THE NEW YORKER PIECE was long and brilliant. The writer took to task all the men who wrote in to say, Total fantasy. A buff, successful, beautiful guy like the doctor would never be attracted to the outa shape, fat, quirky, weird Hannah. He could have had anyone. Hannah would be the last gal he’d have picked.

At first, I agreed with the boys. All of the men I know would never be with our heroine. Too shallow. They hate fat girls. Most men sleep in their looks league – or better, if they have money and are willing to spend a lot of it on a beautiful woman or a much younger woman. It’s tougher for us gals to turn this trick cuz 1. lots of guys have ok paying work and 2 they ARE MORE VISUAL than we gals are and will date “down,” if the woman is gorgeous.

So what about Hannah and her doctor?

I think it’s plausible that an incredibly handsome, muscular god is willing to play almost naked ping pong with a 24 year old chubby girl if IT’S OUR HANNAH. She is, we believe, so smart, so sensitive, so funny, so …. special …that she could pull a beautiful guy like the doctor in. Her quirkiness, her total emotional nakedness, her realness… all character traits that the doctor may not get to experience very often.

But then Hannah blows it. At one point, after she passes out in hisshower, and is coming to on his bed … she begins to cry. She tells the doc that all of this nice stuff, a great guy, a gorgeous home, money, comfort, lazy barbeques on a sun drenched deck in the city … juicy steaks … this is what she wants even though she has been fighting this scene her entire young adult life.

“I just want to be happy,” she says.Is that so bad?

The sweet doc says no and strokes her baby fine fair.

Then reality. The gorgeous doc’s face changes. Grows serious, then slightly scared. He realizes that with the quirky brilliant Hannah comes the underside of quirky and brilliant: she’s got baggage, she’s over sensitive, she’s a lot of work, she’s a gaping wound … .How can he stay with a head case like our beloved Hannah.

No words exchanged. Our heroine sees it all in his face. He leaves for work. She knows it’s over. And then she makes herself a light breakfast, makes their bed, takes out his trash … and heads home.

Can’t wait for this new season of GIRLS. Check out this fantastic tv show!

Last week I told you how great the HBO TV series GIRLS is. Here are a few of my favorite scenes from the show. Click on links below photos of the GIRLS to watch the video clips.  – R. Tirella 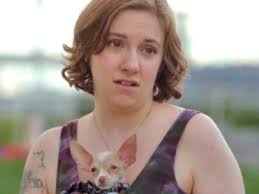