Still need a holiday gift for a special senior, teen, or person who loves animals but lives in a condo/apartment complex that doesn’t allow dogs or cats?

Well, Belle and Sebastian, two pretty parakeets, may be the answer to your Christmas prayers! They need a forever home! (you can’t see one birdie – he’s behind the yellow card on cage)

I’ve owned parakeets; they are smart, fun, trainable and lovable!

Belle and Sebastian, their cage and all their necessities can be purchased at the Worcester Animal Rescue League on Holden Street, Worcester, for the rock bottom price of $35. … $35! What a great adoption fee!

Visit them this weekend – and all the other animals – at WARL. 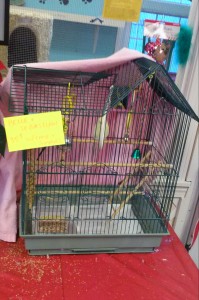 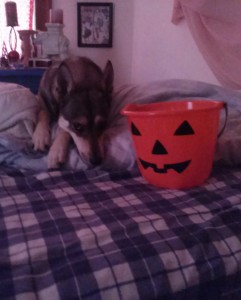 ICT’s Rosalie adopted the adorable Jett (pictured above) from the Worcester Animal Rescue League 4 1/2 years ago. She also adopted her second dog, a huge Nova Scotia Duck Tolling retriever mix, and her first pup, a greyhound/lab mix, from WARL. They have all been THE BEST DOGS IN THE WORLD to her!

Calling all animal lovers! See and pet and walk the dogs! Cuddle a kitty!  Adopt! Have fun!

Before we get to the InCity Animal Times column …

WHAT’S THE BEST WAY TO THANK AN ANIMAL SHELTER WORKER?

National Animal Shelter and Rescue Appreciation Week runs from November 2 to 8, and the dedicated people who work in our country’s open-admission animal shelters—shelters that welcome every needy cat and dog who comes through their doors and never turn animals away—deserve our thanks and support for the difficult work that they do.

Working in a shelter is physically demanding: Employees heft heavy dogs onto examination tables, unload vans full of 50-pound bags of kibble, scrub down soiled kennels and launder load after load of blankets. They get scratched—and sometimes bitten—by animals who are confused and terrified on arriving at the shelter. Many shelter workers wear scrubs because there’s a good chance that they will be covered with slobber, muddy paw prints, cat hair and some even less appealing substances by the end of the day.

Their work also takes an emotional toll. Shelter staffers assist animals in every condition—from strays who are screaming in pain because they’ve been hit by a car and orphaned newborn puppies and kittens who must be bottle-fed every few hours to bone-thin dogs who are aggressive after being kept chained outside their entire lives and bewildered, frightened cats who have been removed from the only home they’ve ever known after their elderly guardian has passed away.

Shelter workers also have to hear the many excuses that people give for surrendering their animals: He barks too much. He doesn’t bark enough. She’s too friendly. She isn’t friendly enough. We’re moving, and it’s too much trouble to bring him with us. He’s getting old, and the kids want a puppy … and on and on.

People who work in shelters handle all of this because they’re committed to providing a safe haven for cats and dogs who have nowhere else to turn and because they love animals. That’s what makes another aspect of their job so wrenching: the need to euthanize animals in order to accommodate the never-ending stream of cats and dogs who pour through the doors day after day.

It takes a brave and selfless soul to feed, walk, play with and love a dog or a cat for a short time, knowing that you may soon have to give that same animal a painless release from a world that has no decent place for him or her to go. Until breeders, puppy mills and pet stores stop pumping more puppies and kittens into a world that’s already short on homes and until spaying and neutering are the norm everywhere, euthanasia will remain a sad—but merciful—necessity for open-admission shelters. It’s painless for the animals, but for the workers who must perform it, it’s anything but.

On top of the heartache of having to euthanize animals, workers at open-admission shelters are increasingly attacked by anti-euthanasia campaigners and put under tremendous pressure to end euthanasia at all costs. But the alternatives—keeping animals caged indefinitely, turning them away to suffer and die slowly on the streets or handing them over to anyone who will take them (including hoarders)—leave animals in peril.

As much as they might wish for one, shelter workers have no magic wand that they can wave to create homes for all the animals who need them. But each of us can save lives—and make life a bit easier on shelter workers—by preventing more animals from being born in the first place.

Spaying and neutering our animal companions—and encouraging and helping our friends, family, neighbors and coworkers to do the same—is the key to ending animal homelessness and the resulting need for euthanasia. It’s also the best way to say “thank you” to the kind people who care for our communities’ lost and abandoned animals every day.