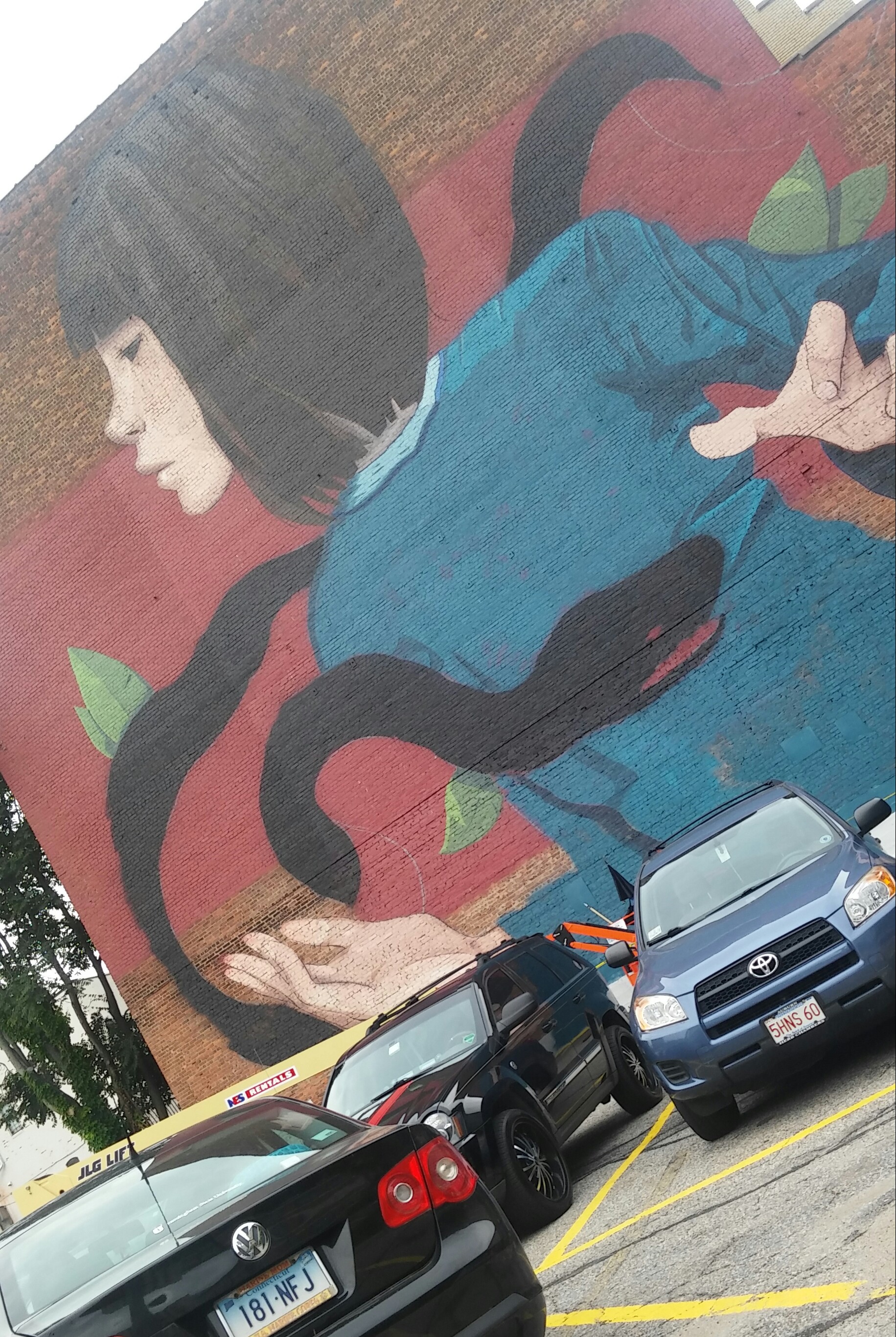 Have you seen our downtown murals? They’re GLORIOUS! Global, edgy, multi-voiced…They’re all over the place! Their politics … their young-ness … their yearning … LOVELY! They depict a complex, often challenging world; people of many races, especially the young (cuz the ARTISTS ARE GIFTED and YOUNG!); they show me the Worcester, the global community of TODAY! WOW! So atypical for my city – a city that typically contemplates the hair in its ear canals. “This is what you’d see in San Fran,” I think to myself as I drive around, soaking in all our new, fab public art. “Never in Worcester! Not in four score and seven centuries!”

Of course, my instincts are on point. After only four days of the art event’s final celebration: The same old depressing Wusta crap: Tuesday, tomorrow, night City Councilor Konnie Lukes – one of Worcester’s preeminent slumlords – is gonna rain all over our mural parade. At the City Council meeting she’ll basically call them ugo. A la Trump, she will give voice to all the racist, xenophobic, close-minded fatheads who’ve whined (to her?) about the murals’ themes while manifesting her own personal, foggy, out-of-touch, whack-doodley world view. She will grill the city manager, whose office spearheaded the art-scapade! Who, she’ll demand, decided what was going up?, who was vetted and how?, why all the outsider artists?, how long are these danged murals gonna stay up?, are they bummers? and do we have to up-keep them? Plus: THIS HAPPENED SO FAST, WITHOUT ME KNOWING A THING ABOUT IT! IT’S A LEFTY … CONSPIRACY!!!!! 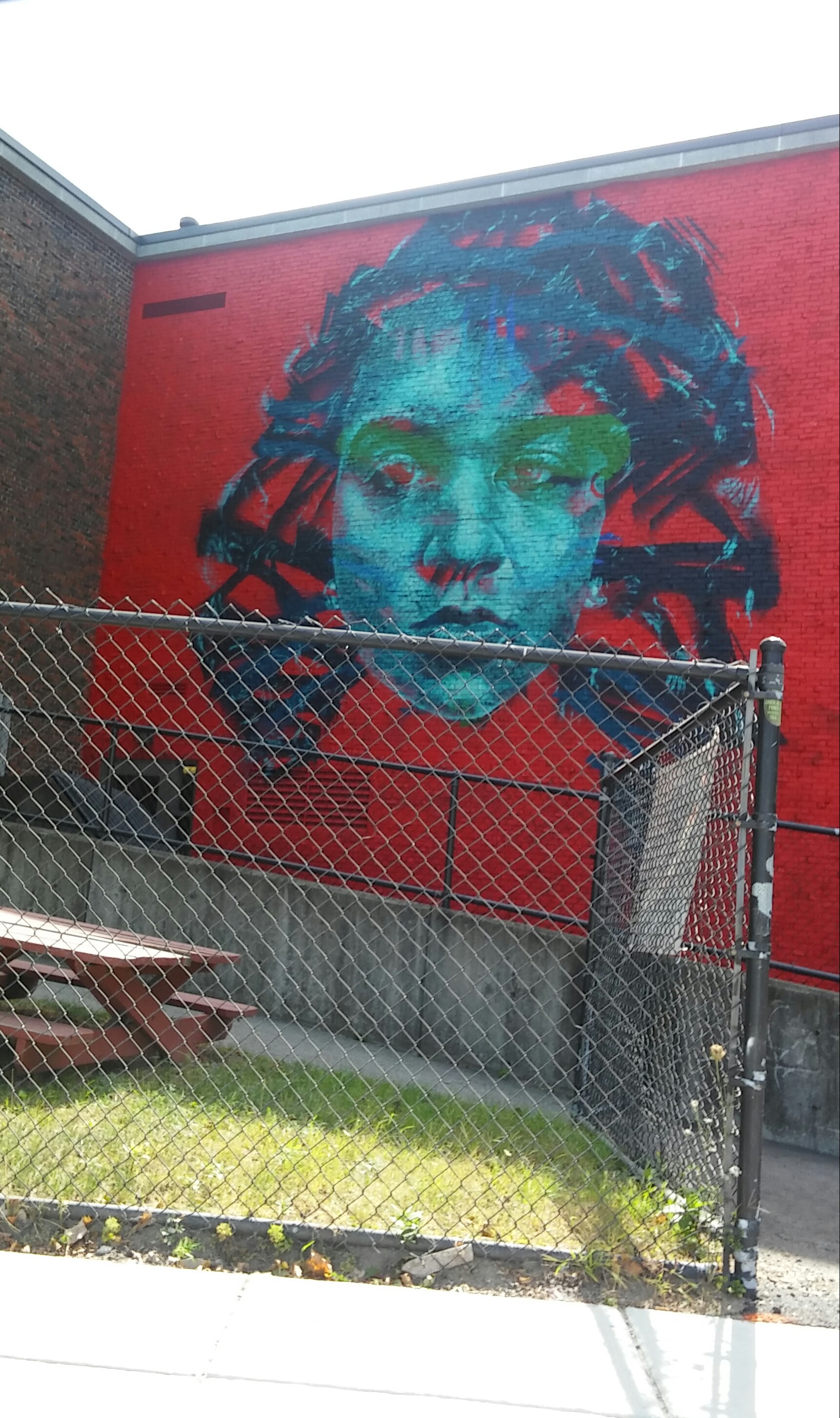 She says a camp is a more efficient, BETTER WAY to CARE FOR our city’s homeless, rather than have them living in 80+ makeshift encampments across the city – woods, parks etc. These hidden, often lonely corners of our community are where our homeless neighbors, many struggling with mental illness, sleep/live/suffer. Matilde asks: Why not have a central place for them to get the help they need? Especially with winter coming on?

Well, from the press release Worcester City Manager Ed Augustus fired off, FREAKING OUT BIG TIME over her suggestion, you’d think Matilde, the city’s relatively new (and naive to the Woo political bs?) Commissioner of Health and Human Services, was a crack pot! A cuckoo! From Ed: “To be clear, the city of Worcester does not plan to establish any kind of homeless camp. We are not considering it, and I would not be in support of it. … My administration remains committed to taking a common sense approach to addressing the issue of homelessness.”

Thank you Ebeneezer Scrooge!: Better they die and decrease the surplus population!

What does Dr. Mattie Castiel know?

The know-nothings on the Worcester City Council will ride this pony hard (see the blood-encrusted lash?), for easy, cheap publicity (the homeless have zero clout).

When will our “leaders” realize: Events are in the saddle, and once again they are riding the Worcester City Council!

Remember the Homeless Persons Who Have Died at event, Monday, December 21

Homeless Person’s Memorial Day is an annual event commemorated in more than 150 cities and counties across the United States on the first day of winter.

Building on the theme of “remember, hope, and heal,” the event will feature a ceremony honoring the persons, homeless and formerly homeless, who died in the past year.

The event is open to the public and all are encouraged to attend.

Advocates, service providers, homeless and formerly homeless people, religious leaders, and concerned citizens will honor the lives and dreams of homeless men and women who died this year in the Worcester area.

More than 35 homeless and formerly homeless persons who lost their lives this year will be remembered. Since 1990, groups such as HOAP’s Consumer Advisory Board have hosted National Homeless Persons’ Memorial Day events across the country on the first day of winter to bring attention to the tragedy of homelessness and to remember our homeless citizens who have died.

Amy Grassette, one of the event’s organizers, said: “We use this occasion to call on all our fellow community members and all Americans to recommit ourselves to ending homelessness. While we seek economic solutions for our country, we cannot forget our most vulnerable citizens.”