… Why is Worcester’s planned memorial to our fallen African American W W II soldiers being erected at the Worcester Police Station?

Why not put the statue honoring our Black soldiers who made the ultimate sacrifice right where it belongs? On the Worcester Common, along with all the other statues honoring Worcester’s fallen heroes?

There’s a slew of them on our Common –  in the middle of our soon-to-be revitalized downtown! Around and behind Worcester City Hall … they adorn the grass and trees that surround them even as we try (at least on holidays) to adorn them – lay wreaths braided with flowers or pine at their feet. We walk or drive by the stone and iron soldiers if we work in or visit the heart of our city. They make you think … put aside your work, dining, shopping obsessions for a few fleeting seconds to see something greater – a person’s life story, a city’s story, world history. The stone and iron soldiers come alive!

You can even build the new memorial to our Black WW II soldiers next to our John Power WW II monument that stands right outside our City Hall. The monument to our Black WW II heroes –  it was called the “Colored Citizens World War II Honor Roll Memorial” –  was once located in our African American Laurel-Clayton neighborhood but disappeared, along with the neighborhood!, when the interstate highway was built.  John Power is STILL with us – standing guard by Worcester City Hall (see my photo, above). So, truth be told, we will be building a new monument because we lost, destroyed, the old one! How can you “lose” a monument? What does that “loss” say about our city a few decades ago? Back then, how sacred to our city fathers were the memories of these dead African American soldiers – Black men from Laurel-Clayton, from Worcester?

Not very sacred at all.

Hell! There’s room for a tank or a couple of Jeeps to the right of the John Power statue. There John stands as the hip students walk by to get to their recently built dorms on Franklin Street … 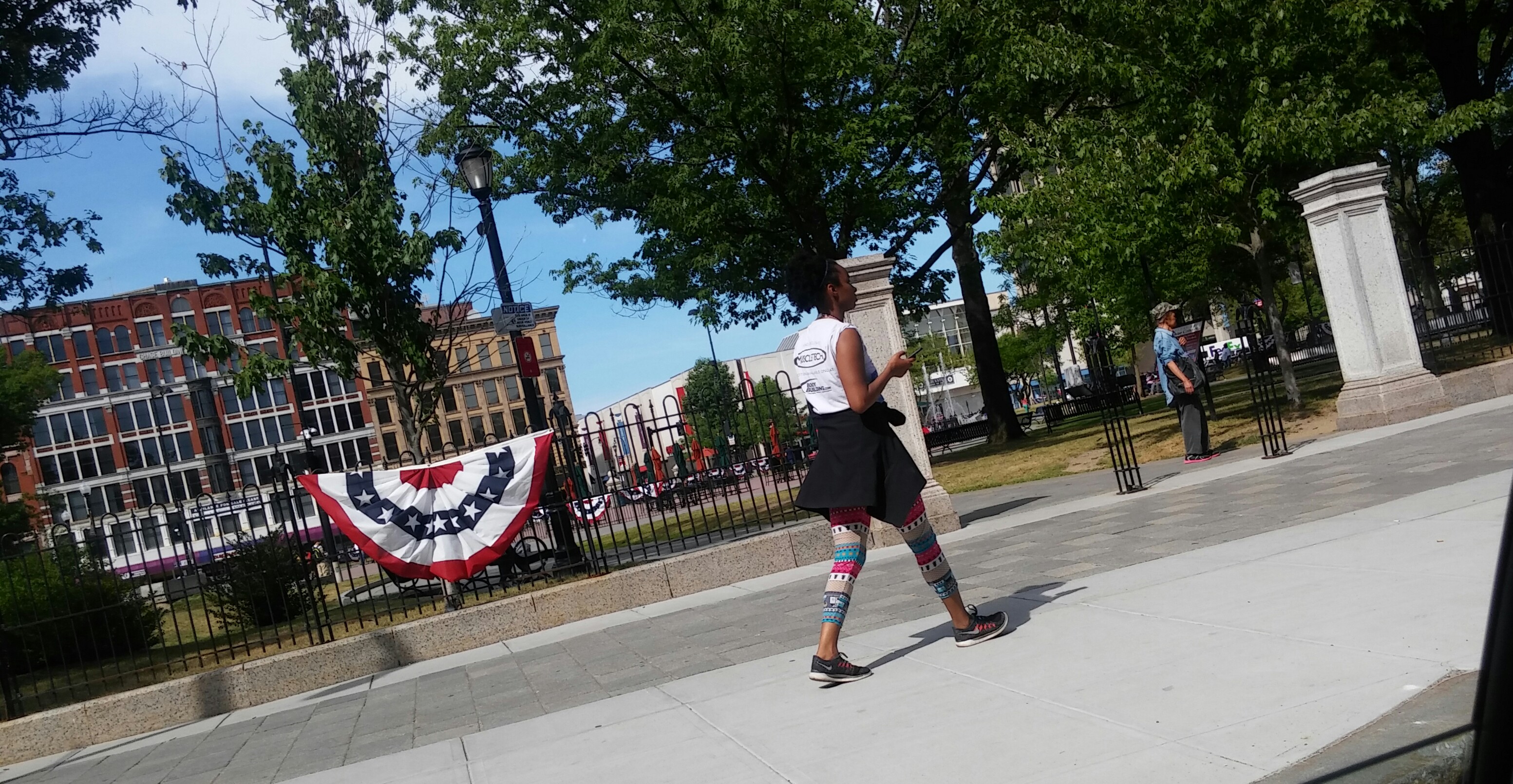 Soldier Power doesnt look hip at all! He looks like your average WW II grunt – ditch digger, mucking around in stinking trenches with penecillin pills, canned spam in his knap sack  –  but a KILLER too. Make no mistake! See the rifle slung over Power’s right shoulder and the long dagger in his left hand? He’s clutching the dagger ready for the fight – hand to hand combat – to the death probably. How can any city deprive a Black soldier, who fought the same fight, the honor we’ve bestowed on John Power? Power’s helmet is on askew cuz he’s in battle. He looks Irish – and a little cockey. Why can’t we humanize our dead African American soldiers this lovingly?

Why can’t Worcester’s Black community have the same thing? A touching yet tough depiction of men in war in stone?

Why stick our Black soldiers at the bottom of Bell Hill, at the Worcester police station, in the middle of a 20-way intersection, surrounded by ugly concrete (we’re talking the police station, too!) – a place where few will visit, stop to honor these men, think about them? A place where drug dealers, robbers, rapists and killers are flung?

Yes, the police station is a stone’s throw from the old Laurel-Clayton neighborhood, razed and replaced by the Plumley Village low-income public housing complex, home to many people of color – Blacks, included. Why not – I’m certain residents would be honored -put the monument there? It would be back at its real home. Placed before the entrance way to the buildings and high rise, lots of folks would stop and pay their respects.

Or is that the point? The intention (maybe subconscious) of Worcester City Leaders? To keep the monument to our fallen Black WW II Soldiers out of the public eye –  especially out of reach of the African American community?

And something else…to stop it from being a focal point, a symbol, a place for Blacks to gather, to remember, to rally, to teach … to protest. So often people come to their city or town common to express views, speech-ify … Protest! It’s been happening as long as there have been places where people chose to live together. A kind of gathering at the communal fire place! In America we’ve been doing it ever since our forefathers and mothers sailed into Plymouth Rock!

It’s happening still. All over. Especially with Black Lives Matter and, before that, Occupy Wall Street. It’s happening in Worcester. Worcester City Manager Ed Augustus has come down brutally hard on the BLM movement/rallies here, just as his predecessor City Manager I HATE ALL POOR RESIDENTS Mike O’Brien was hard with Occupy Wall Street protesters – refusing to meet with them, making sure they were off THEIR Worcester Common!

Would city leaders want a Black Lives Matter march to end at the “Colored Citizens World War II Honor Roll Memorial” on the Worcester Common? Would they want to see anyone give witness to pain, anger, racial discrimination in Worcester, “a city on the move”? Would they want a large crowd of folks agitating for change? In the middle of downtown?

Is this what John Power died for?