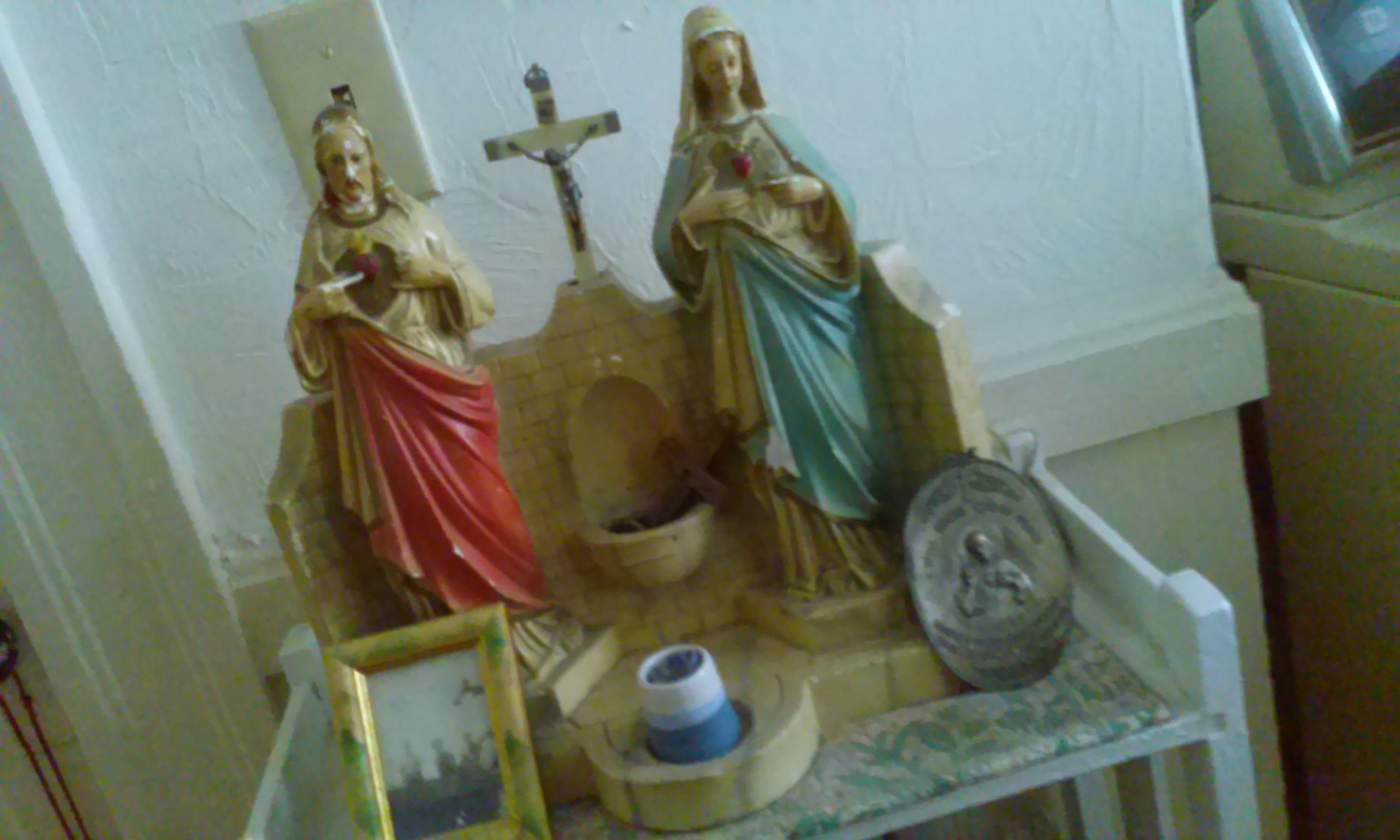 This fairly large statue (now home in my kitchen) belonged to my Polish Bapy and was handed down to me when she died years ago. Its history is especially heart-warming on this snowy day: When my Bapy and my grandfather lived in Green Island, on Bigelow Street, in the 1930s, there used to be a travelling icon salesman. Worcester’s old ethnic neighborhoods, filled with religious immigrants who missed their “Old Country” and how their lives there revolved around God and their church, had these Jesus, Mary and Joseph peddlers who went door to door selling all kinds of icons. You’d order your statue from these guys, usually cast in plaster of Paris, then pay 5 cents down on it each week to the travelling icon salesman when he stopped by your house to collect your pennies and to try to sell more icons to you or your neighbors! After you paid up your 50 cents, $1, $2, etc, the statues of Saint Joseph, Saint Anthony, Saint Theresa were yours.

It was the heart of the Great Depression, and Polish immigrants like my grandparents didn’t have a lot of dough.  But my Bapy fell in love with this Jesus and Mary statue, complete with holy water bowl and wooden (now replaced) cross on top. And my grandfather, who was deeply in love with my pretty granny for the 50+ years (!) they were married and who worked in the textile mills in Dudley, wanted to get her this fairly big statue – almost like what you’d find in their church! – as a special gift. (They were married on Valentine’s Day! So they could be very romantic with each other!)

My Bapy never kept her holy water, blessed by the Bishop, in the holy water bowl of this icon, which now sits by my back door and says “goodbye” to me, “blesses” me through my grandmother’s love, EVERY DAY as I head out my kitchen to run InCity Times. My dumpling-shaped, feisty, little granny (she was only 4′ 10″ tall!) kept her holy water in a special plastic holy water bottle, also blessed by the Bishop, literally by her side, tucked under one of the pillows, of the dumpy, lumpy easy chair she used to sit on – at the head of the kitchen table. My grandfather planted it there for her so she could be in the middle of all the familial action, and when he died and she moved in with my mom and us kids, my mom planted that same dumpy chair at the head of OUR kitchen table so she could lord it all over us!

Bapy kept one of her many rosaries in the holy water bowl of the statue. I don’t know where that rosary is at the moment. But today I have my late mom’s religious medals in the bowl, along with a wooden cross. At the foot of the statue, to the right, you see the oval, metal Jesus plaque my mother used to have nailed into the kitchen door of our Lafayette Street apartment – a blessing for all who entered or left our flat. Jesus, keep us all safe as we go to work, school and church and make our way through our Green Island!, the plaque seemed to say to all. 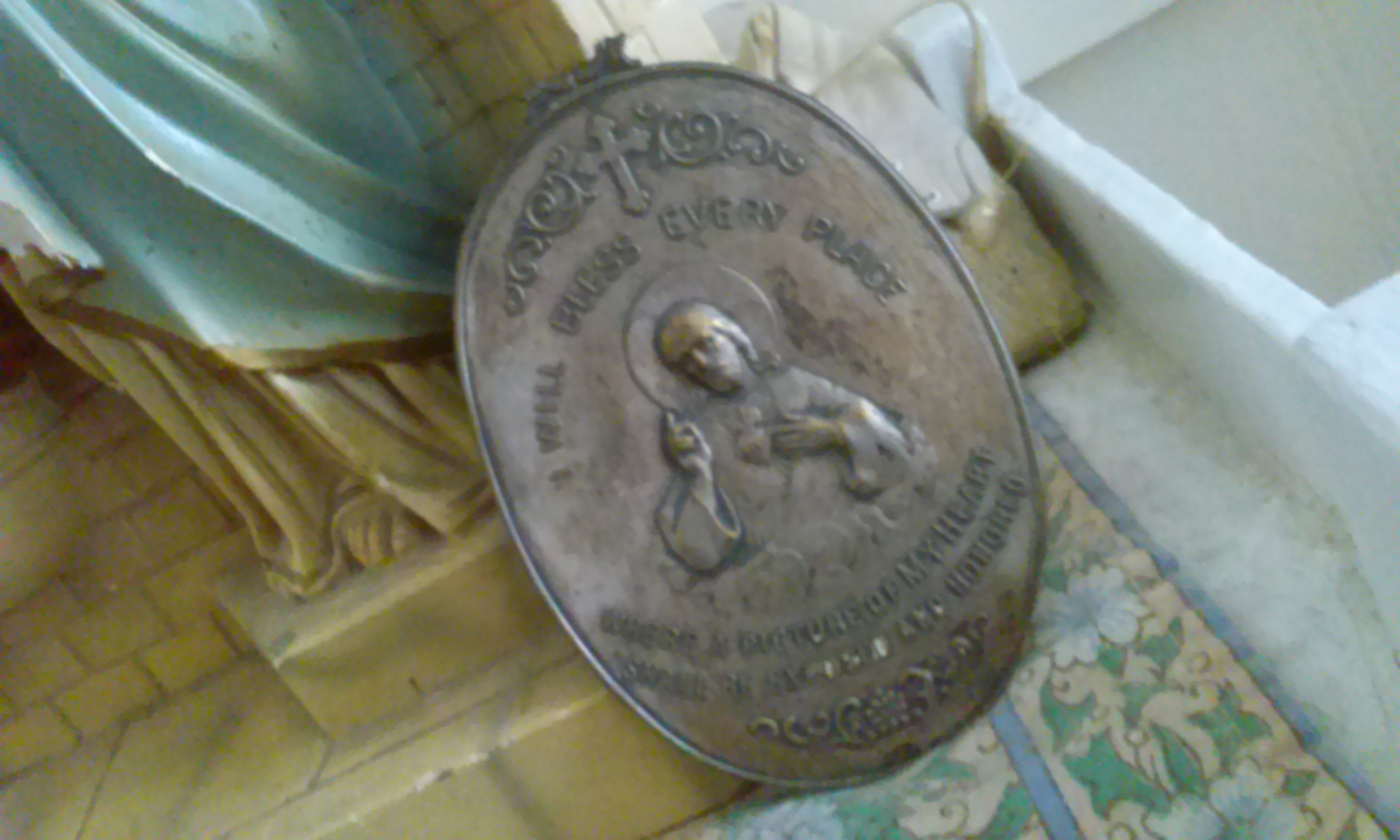 To the left, at the bottom of the statue, is a little World War II photo of my late Uncle Stan on his battle ship. He was in the US Navy and can be seen here, with his ship’s mascot, a little lab/terrier dog, the kind of feisty boy you’d need in a fierce battle! I put the photo there a year ago to remember my uncle. 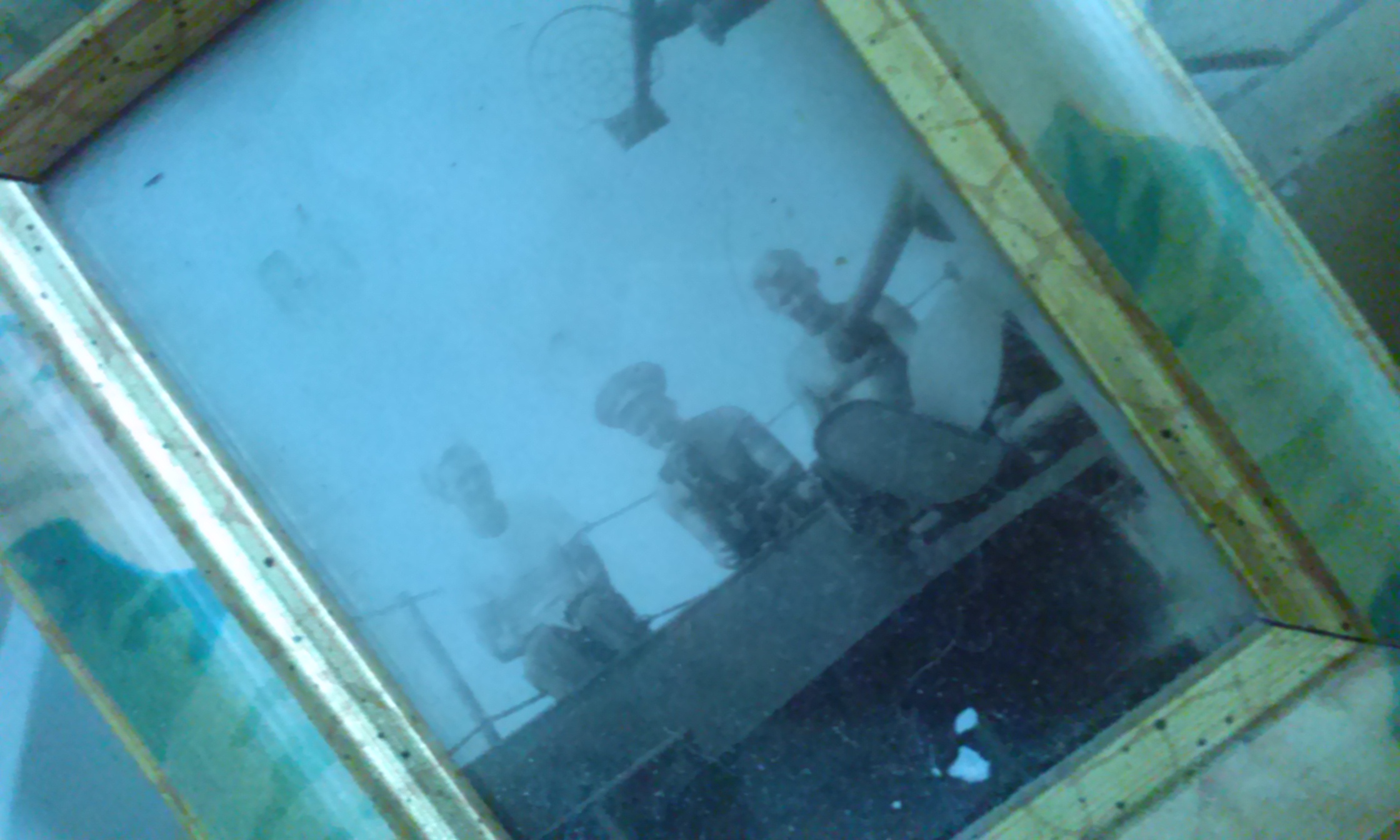 In my old apartment, I used to keep this huge icon in my bedroom, on a bureau, and light candles all around it at night. The Church of Rose, Perpetual Bleeding Heart. Very soothing … and romantic … .

But these days I like it in my kitchen where I can enjoy it while doing the most mundane stuff: drinking my coffee or tea, taking Jett out to pee or shit – just running my day in the simplest, best way I know how. It makes me feel good … about my beloved Bapy, my quiet, good natured Polish granddad who only spoke a handful of English words til the day he died, my late sweet sweet mom, my Green Island upbringing, Catholicism, being a second-generation American, and my writing life today.

(Below: ICT Editor Rosalie as a little kid with her beloved Bapy in their Green Island kitchen.) 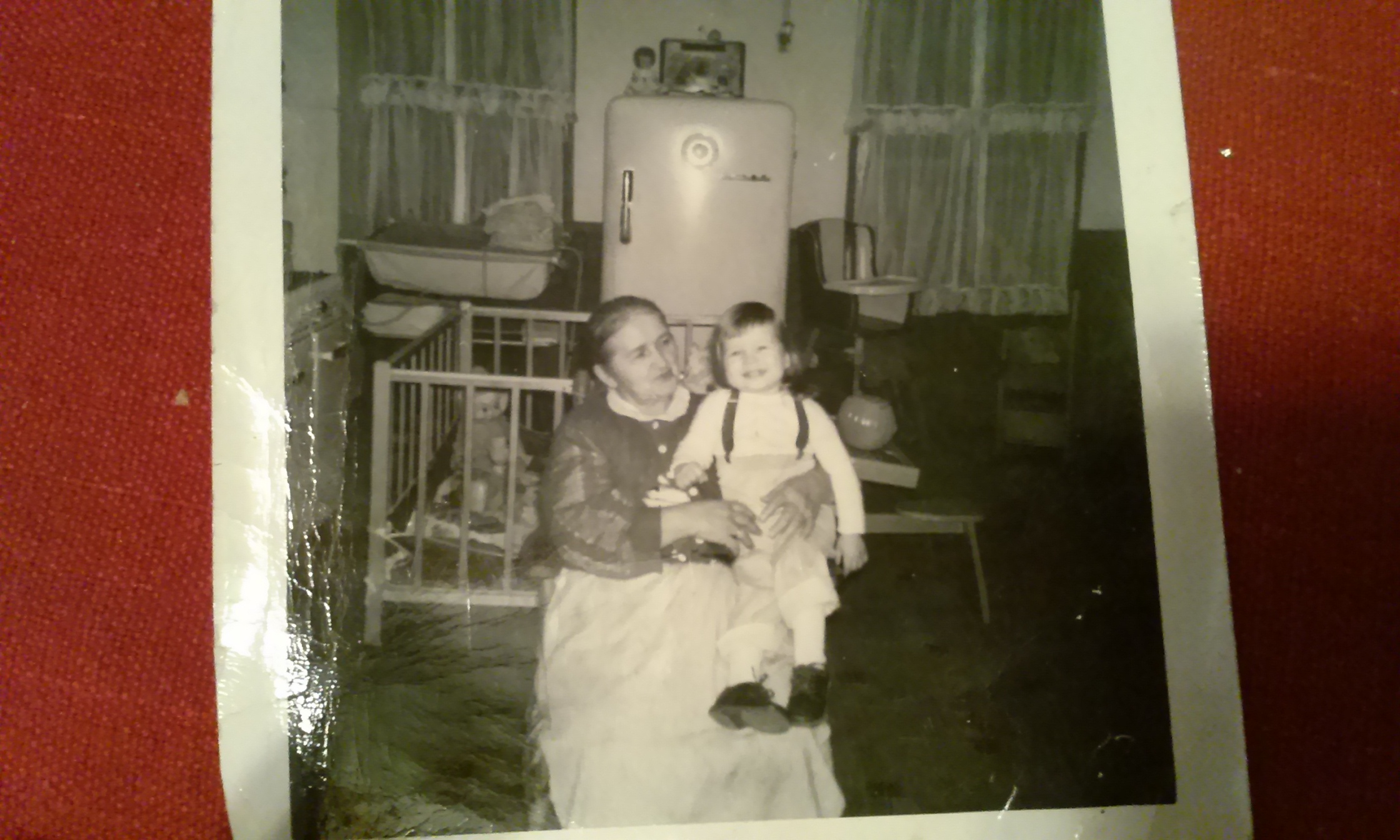 Iconic News Photographs of the 1960s at the Worcester Art Museum

Kennedy to Kent State: Images of a Generation,
The gift of David Davis

The Worcester Art Museum is pleased to announce its major fall exhibition, Kennedy to Kent State: Images of a Generation, is on view now through February 3, 2013. The exhibition features some of the most powerful and provocative American photographs of the 1960s. (editor’s note: WAM is FREE to the public on Saturdays, if you get there before noon.)

The photographs chronicle world events during the turbulent decade of the 1960s. From disturbing assassinations, the Vietnam War, antiwar protests, the thrill of space exploration, and the lightheartedness of pop culture, this exhibition represents a range of human emotion. The photographs are from the museum’s permanent collection. The photographs were originally collected by David Davis, as a way to recall and reflect his memories of the era.

The photographs also reveal the activities of news gathering and publishing in the 1960s. Many are vintage wirephotos or file photographs from newspaper and magazine archives. These were used in editing, layout, and as camera art for the creation of printing plates. In the 1990s, when news outlets transformed their imaging libraries to digital formats, these objects were discarded or released onto the market. Many of the prints were stamped or inscribed on the back with a record of each use, and in this way they reveal their own history, and carry powerful qualities as artifacts.

“The Worcester Art Museum was among the very first American museums to exhibit photographs as works of fine art,” said Matthias Waschek, director. “In 1961, coincidentally the time that the Kennedy to Kent State era began, we established a curatorial department of photography and began building a permanent collection. These holdings now represent a survey of the history of photography in the United States in its fascinating variety. To the post-Baby Boomer generations, this exhibition has the power to awaken them to the correlation between their present lives and the not-so-distant past.”

“Then, as now, pictures were the medium by which most people experienced the wider world,” said Acton. “Photographs created a common experience, plotting a historical arc of embracing familiarity. Kennedy to Kent State presents a selection of these pictures, providing a glimpse of that turbulent time. Many of the images transcend reportage. In their momentary imagery, refined compositions, and humanity, they attain the stature of true works of art.”

In 2000, David Davis founded the Schoolhouse Center for Art and Design, home to the Driskel Gallery of Photography, and the Silas Kenyon Gallery of Regional Art in Provincetown, Massachusetts. When Davis acquired the famous Vietnam photographs by Nick Ut and Eddie Adams, he began his 12-year project to collect a survey of the iconic images by which Americans experienced a transformative period of their history.

“I wished to do something that I have not seen before,” said Davis, “to present a kind of storyboard of the 1960s. From the time I entered my teen years until that of my college graduation, there were assassinations, an unpopular war, a trip to the moon and the rise of the protest movement and counterculture. It was a confusing, unsettling, exciting, and

David Hume Kennerly, a Pulitzer Prize winning photojournalist and who served as the personal photographer to President Ford, will give a presentation on Veteran’s Day, November 11, at WAM. The museum is also supporting the exhibition with an opening party, a day-long symposium, lectures and classes, participatory displays, special tours, dramatic readings, musical events, family programming and joint programming with the MassHumanities.

The illustrated exhibition catalog by David Acton and Nancy Burns with an introduction by David Davis is available for purchase in September by the publisher, the Worcester Art Museum.