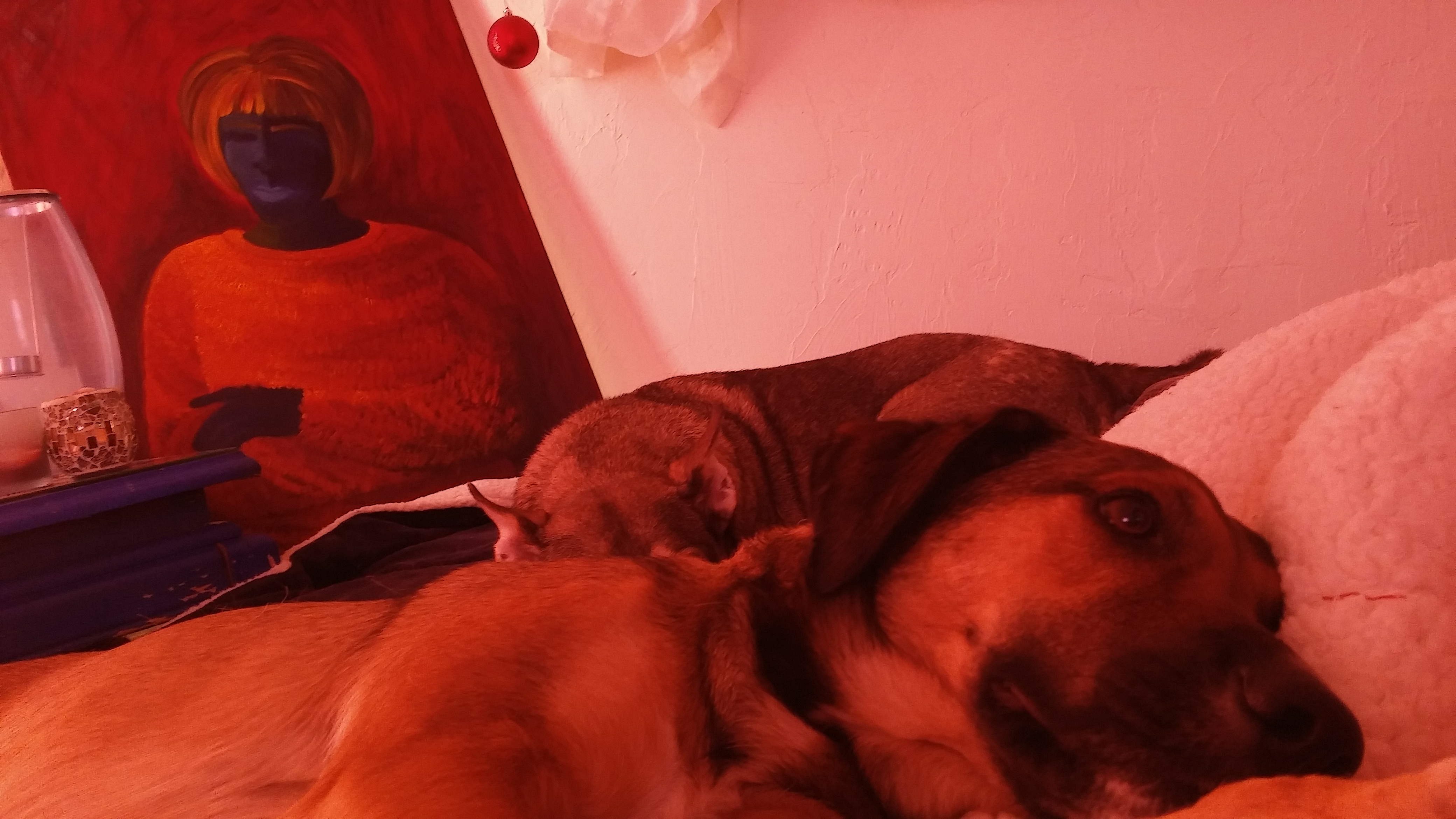 Lilac and Jett – a couple of all-American mutts! pic: R.T.

It’s awards season. Movie buffs tune in to the Academy Awards, and music fans gear up for the Grammys. But people who care about dogs want nothing to do with the Westminster Kennel Club Dog Show — at least, not once they learn that this overblown spectacle costs dogs their health, their happiness and even their lives.

It’s all about appearances at Westminster. To produce dogs who are cookie-cutter replicas of the American Kennel Club’s (AKC) “breed standards” — which the judges use to decide who gets ribbons and titles — breeders engage in practices that leave many dogs with lifelong deformities and serious, even fatal, health problems.

Breeding for size extremes, to name just one example, has created a host of health woes. “Giant” and large breeds, such as mastiffs, St. Bernards, Great Danes, Rottweilers, Labradors and golden retrievers, are prone to hip dysplasia — which can cause severe pain and lameness— as well as osteosarcoma, an extremely aggressive bone cancer that tends to metastasize rapidly to other body parts.

Tiny breeds, such as Boston and Yorkshire terriers, Chihuahuas, Pomeranians and miniature poodles, are prone to patellar luxation (dislocated kneecaps), which is painful and can cause lameness. Dogs who’ve been bred to have unnaturally short legs, such as basset hounds, often endure chronic problems with elbow dislocation. Dachshunds are notoriously prone to ruptured vertebral discs, which can cause intense pain and lead to permanent paralysis.

Inbreeding — which breeders often resort to in an attempt to keep prizewinning traits “in the family” — also increases dogs’ odds of inheriting a long list of debilitating genetic afflictions. Cardigan Welsh corgis, dachshunds and basset hounds, for example, are prone to primary severe combined immunodeficiency (the “bubble boy” disease). Addison’s disease, an autoimmune disorder that affects the adrenal glands, is more common in bearded collies, Portuguese water dogs and standard poodles and can cause them to become weak and lethargic, vomit, stop eating and collapse from shock. The list of genetically linked canine health afflictions goes on and on.

But despite these risks, breeders mate countless dogs with their family members. At Crufts — Westminster’s British counterpart — the 2016 Best of Breed Pekingese award went to a dog whose paternal grandparents were half siblings. The 2015 Best of Breed pug award went to a dog whose family tree is even more twisted: His grandfather on his mother’s side is also his father’s grandfather.

As disturbing as all this is, what many people who care about animals find most upsetting about Westminster is that it worsens the homeless-dog crisis. Not every puppy breeders produce in hopes of taking home a ribbon is a prizewinner, and those who aren’t are often sold. These puppies take away the chance of finding a home from a dog waiting in a shelter.

Many purebreds also end up homeless themselves — they account for about a quarter of dogs in shelters. And by promoting purebreds and implying that they are somehow superior — even though mixed-breed dogs are just as smart and loving, in addition to being far less likely to experience the health problems that plague purebreds — Westminster drives traffic to breeders and pet stores instead of to shelters, where there are countless loving dogs in desperate need of homes.

Westminster doesn’t honor dogs; it harms them — from those who suffer their whole lives for a certain “look” to those who miss out on homes because people think they need a purebred instead of a lovable mutt. That’s why anyone who truly cares about dogs will condemn this cruel “awards show.”

I got strep throat almost every year as a kid, and it always seemed to strike in February. For me, the injustice of missing out on swapping paper hearts and candies with my friends at school was tempered by lying on the couch with my dog, Katie, and watching the Westminster Dog Show. But had I known then that Westminster — and the dog-breeding industry that it props up — share the blame for the mutilation and deaths of millions of dogs each year, I would have changed the channel faster than you can say “Sesame Street.”

Back then, I had no idea that the snub-nosed bulldogs and pugs prancing around the ring may have been gasping for breath the whole time because these breeds’ unnaturally shortened airways make exercise and sometimes even normal breathing difficult. I didn’t know that the “wiener dogs” who made me laugh as their little legs tried to keep up may have eventually suffered from disc disease or other back problems because dachshunds are bred for extremely long spinal columns. I didn’t learn until much later that because of inbreeding and breeding for distorted physical features, approximately one in four purebred dogs suffers from serious congenital disorders such as crippling hip dysplasia, blindness, deafness, heart defects, skin problems and epilepsy. END_OF_DOCUMENT_TOKEN_TO_BE_REPLACED