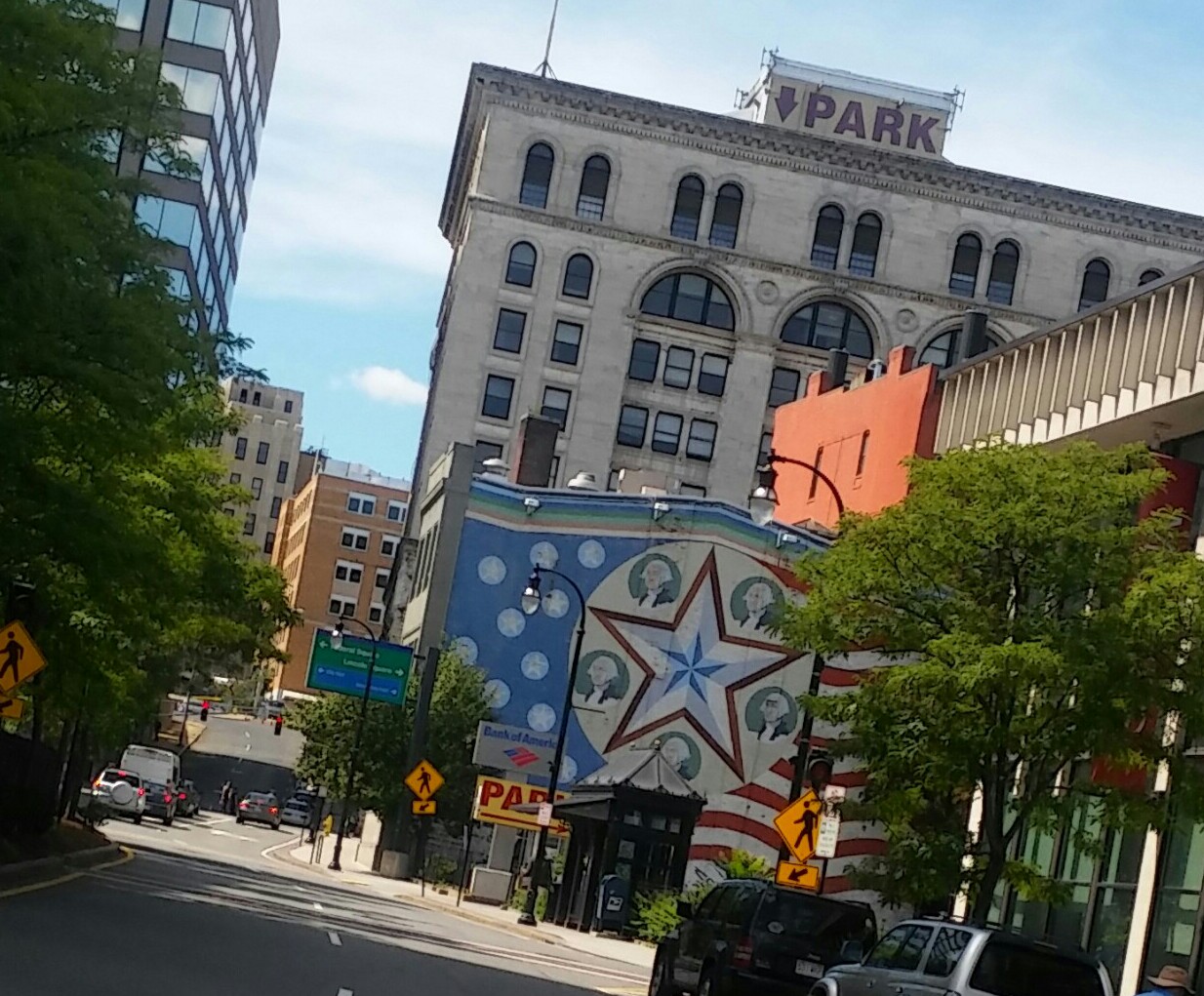 We love this Downtown Worcester presidential classic! This patriotic mural’s been with us for years! pic: R.T.

The Great Divide: The Conflict between Washington and Jefferson that defined a nation

As Donald J. Trump and Hillary Clinton battle it out for the Presidency, polls show many Americans are disgusted by the level to which politics in the country has sunk. As candidates and their surrogates launch vicious television attacks on each other’s business dealings and private lives, Americans wonder how the country got to the point where anonymous attacks via social media, innuendo and character assassination are commonly practiced tactics.

But to the contrary, such partisan bickering, particularly anonymous attacks, are nothing new. As historian Thomas Fleming shows in his book, “The Great Divide: The Conflict between Washington and Jefferson that defined a nation,” such methods began in the earliest days of the republic. Opponents of Thomas Jefferson and Treasury Secretary Alexander Hamilton published sexual accusations about each other. If there had been Twitter in those days, there is little doubt that Jefferson and Hamilton would have been clicking out daily attacks on each other with the verve and gusto of a Donald Trump.

George Washington and Thomas Jefferson had different visions of America’s future. Both men had been shaped by their experiences in the Revolutionary War. Washington found himself enduring terrible winters at Valley Forge and Morristown, sending out letters to Congress pleading for supplies for his famished and ill-clothed army. Congress lacked the legal authority to impose the taxes necessary to fund an army. Washington wanted a strong government, capable of raising an army to defend the country at short notice. Washington sought to launch America on a capitalistic future, using markets and American entrepreneurship to develop the industries needed for the country’s prosperity.

Jefferson, as portrayed by Fleming, was a failure during the American Revolution. He was nearly captured by the British and failed to raise, as Governor of Virginia, sufficient militia forces to fight off British troops, led in some cases by the traitor Benedict Arnold who conducted devastating raids across Virginia. Jefferson saw America’s future as primarily agricultural, without a Navy or modern army, protected by local militias. Jefferson is depicted as someone comfortable with writing legislation and declarations but lacking what Fleming saw as the essential attributes of a great leader.

Jefferson’s main supporter was James Madison, who wrote most of the U.S. Constitution and succeeded Jefferson as President. After the Constitution came into existence, Washington, elected president, appointed Jefferson Secretary of State and Hamilton as Secretary of the Treasury. Madison was ensconced as a leader of Jefferson’s faction in the House of Representatives.

The country soon became embroiled in controversies over the form of the new federal government and the French Revolution. Jefferson hired a man named Philip Freneau to serve as a department of state translator. Freneau used the proceeds from the job to fund a newspaper he called The National Gazette, where he published 18 unsigned articles written by Jefferson attacking Hamilton.

Writes Fleming: “This was, and remains, a unique performance – giving a newsman a government salary to attack the administration in which his patron was supposedly a loyal partner.”

Allies of Hamilton soon struck back; future President John Quincy Adams, the son of then Vice President John Adams, under the pseudonym “Publicola,” published 11 essays attacking Jefferson. Eventually, an affair Hamilton had with a married woman was made public.

Likewise, a Richmond Virginia newspaperman, angered that Jefferson did not give him a job, published stories that Jefferson had fathered several children with one of his slaves, Sally Hemmings.

This is an excellent book if, at 424 pages, a trifle long. It is well written, well sourced and is highly recommended for aficionados of American history.