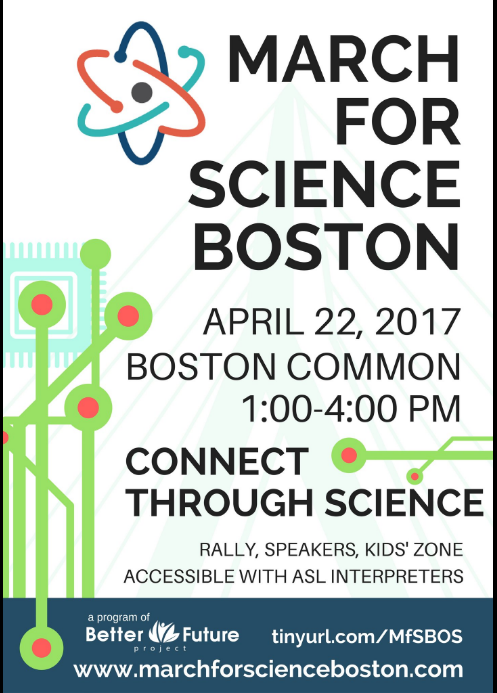 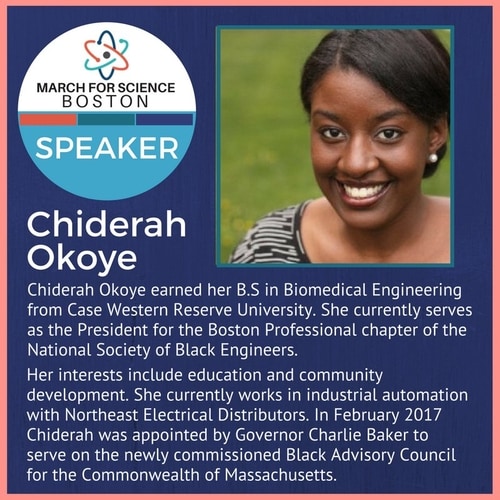 NSBE Boston invites you to join us at the March for Science Boston on Saturday, April 22nd from 1pm – 4pm, at the Boston Common.

This is a family friendly event and it will be outdoors.

March For Science is a celebration of people who love and support science.

The Boston rally is part of the National March for Science taking place in Washington, DC.

NSBE Boston is an exhibition partner for the 2017 the March For Science Boston and will have an exhibition stand. NSBE Boston chapter President, Chiderah Okoye, will be a featured speaker at the Rally.

Volunteer with NSBE Boston : If you are a interested in being a volunteer at the Boston March for Science, please contact Lenny – PCI@nsbeboston.org

March for Science champions publicly funded and publicly communicated science as a pillar of human freedom and prosperity.

We are committed to making science accessible to everyone and encouraging people from diverse backgrounds and experiences to pursue science careers.

Diverse science teams outperform homogeneous teams and produce broader, more creative, and stronger work. This group is inclusive of all individuals and types of science. 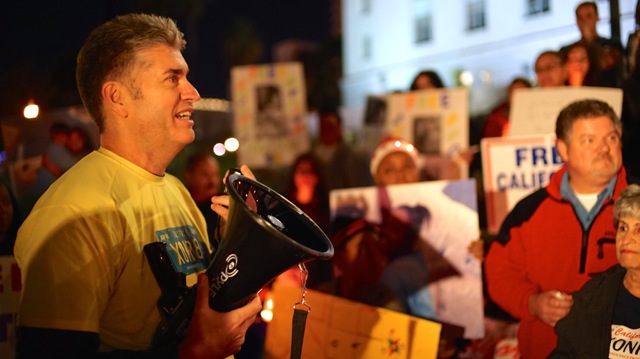 to free innocent people from prison

and to change laws and procedures to decrease the number of wrongful convictions and improve the justice system.

The California Innocence Project’s founding director, Justin P. Brooks, will talk about the organization’s crucial efforts to accomplish those key goals, during a talk at Clark University, from 5 to 6:30 p.m. Thursday, April 20, in the Higgins Lounge at Dana Commons, Maywood and Florence streets.

This event, free and open to the public, is sponsored by Clark’s Study Abroad and LEEP Center, and by CAPA – The Global Education Network.

Brooks is executive director at the Institute for Criminal Defense Advocacy and professor of law at the California Western School of Law, in San Diego, where he also directs the California Innocence Project, a law school clinic that is a founding member of global Innocence Network and has helped launch organizations throughout Latin America.

“Over the years, it has given me great joy to see our work go global in an ‘innocence movement’ that grows bigger and stronger every day,” Brooks writes.
Brooks has spent his career litigating wrongful conviction cases. He recently was featured in Time magazine, and presented popular TED Talks. His high-profile cases include the exoneration of Brian Banks, a former NFL player wrongly convicted of rape when in high school.

The seminar is open to Clark University students.