Like the rest of the nation, and as an openly gay man, I am stunned and heartbroken by the carnage in Orlando. While we as a society debate the factors—anti-gay sentiment, misguided fundamentalism, all-too-easy access to assault weapons—that led to the deadliest mass public shooting in American history, as President Obama rightly noted, “We know enough to say this was an act of terror, and an act of hate.”

Members of the LGBTQ community know what it’s like to feel the sting of mindless intolerance and hatred simply because of who we are. And for many of us, this experience of irrational bigotry informs our advocacy—not only for gay and transgender rights but also for the rights of others who are oppressed, including individuals of other species.

While our country mourns and discusses ways to prevent future outbreaks of such violence, if any good can come of this tragedy, I hope that it will engender continued progress against biases that harm so many of us who are perceived as “different,” including animals.

Animals’ lives are as important to them as ours are to us. They experience fear, love, grief, joy and pain just as we all do, though often their feelings are dismissed as unimportant. Billions of animals are slaughtered, experimented on, shot, poisoned, beaten, shackled, drowned and dissected. This happens routinely, despite the availability of kinder options.

If we truly reject violence, as we all say we do, we must reflect on the torment that animals are forced to endure every day, out of sight, just because they are deemed “different” from us and therefore easy to exploit. And then we must also act. By choosing to eat a vegan meal rather than a meat-based one, buying shampoo from a cruelty-free company or going to a concert rather than the circus, we can easily make a difference. These may seem like simple actions, but our day-to-day choices matter. How we go about our daily lives can perpetuate injustice, or help bring about fairness and tolerance.

Steven Simmons, a respected PETA staffer and gay rights activist who died of AIDS in the mid-1990s, wrote, “It’s time for us to end this hierarchy of who has the right to live, who deserves not to suffer, who should be respected, [the idea] that there’s a limit to the amount of compassion that we can have for our fellow creatures.”

It was Dr. Martin Luther King Jr. who stated, “Injustice anywhere is a threat to justice everywhere,” and it’s worth noting that after his passing, as the concepts of gay rights and animal rights began to spread, his widow, Coretta Scott King, became an outspoken LGBT advocate and a vegan.

Members of the LGBTQ community have fought long and hard to overcome the violence, hatred and prejudice directed at us just because of who we are, and the massacre in Orlando reminds us that there is still much work to be done. But as a society, we must not limit the scope of our concern. Those of us who sincerely want to foster a climate of compassion and peace must have the courage to speak out and stand up against all forms of violence. 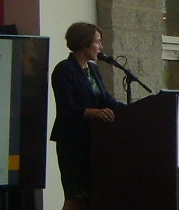 The mass killing at the Pulse night club in Orlando, Florida, has had a more profound impact on me than the mass shootings of 26 people in Newtown, Connecticut. In Newton, 20 of the victims are six- and seven-year-old children. The death of the children is so sad I find it hard to think of it even years later.

The greater impact of the Pulse night club killings is that it seemed to be a hate crime. As a boy, I was most afraid of someone harming me.

The fear of being harmed because of hatred of a protected class is something I still experience. The murder of the Black church goers in South Carolina and now the mass killings in Orlando have brought those feelings once again to the surface.

The mass murders based on protected class are like the lynchings of the 19th and 20th Centuries.

At least two people were a little disappointed in the vigil held Wednesday at Worcester City Hall. No one really talked about hate crimes or gun control.

The rally did send a good message that many in Worcester accept the LBGT community as a part of us. As one person once said to me, “I am here, I am queer. Get used to it.”

In Massachusetts a hate crime is defined in M.G. L. c. 265, s. 39. “Criminal conduct motivated by bias against one of the following protected classes is a hate crime, race, color, religion, national origin, gender identity, sexual orientation or disability.”

Everyone has a protected class.

There are criminal and civil penalties for hate crimes.

The local police and district attorneys may also add a count of hate crimes to a criminal complaint.

There is a Crime Reporting Unit consisting of a joint project of the Massachusetts State Police and the Department of Justice. This reporting unit is tasked with collective data about hate crimes. The Unit is supposed to publish the report annually. The last report I could find on line was 2013.

Criminal acts based on the following biases are included in the report.

The Crimes Reporting Act covers these forms of bias:

The 2013 report has the following information:

There were 491 criminal offenses reported in 2013, the most frequent offense was harassment (33%). Acts of vandalism were second (19.1%). General civil rights violations were third (18.9%) There were 18 aggravated assaults reported in 2013.

Victims were reported to have some type of injury in 21.8% of cases.

During this time period, the most frequently reported bias motivations have remained similar: anti-Black bias has consistently been most frequent (roughly 30% of the total), followed by anti-gay (19%), anti-Semitic (14%) and anti-White (10%).

Because of the Donald Trump and Michael Gaffney effects the statistics are likely to have changed significantly.

Since the time of the Nat Turner fight for freedom in the 19th century many in America have armed themselves against the periodic rebellions by enslaved and oppressed people. It is unlikely that this fear of mostly Black and Hispanic men will disappear until the time that economic disparities and racial injustice are eradicated.

Trump, Gaffney and the National Rifle Association have used this fear to divide us, gain power and make a profit.