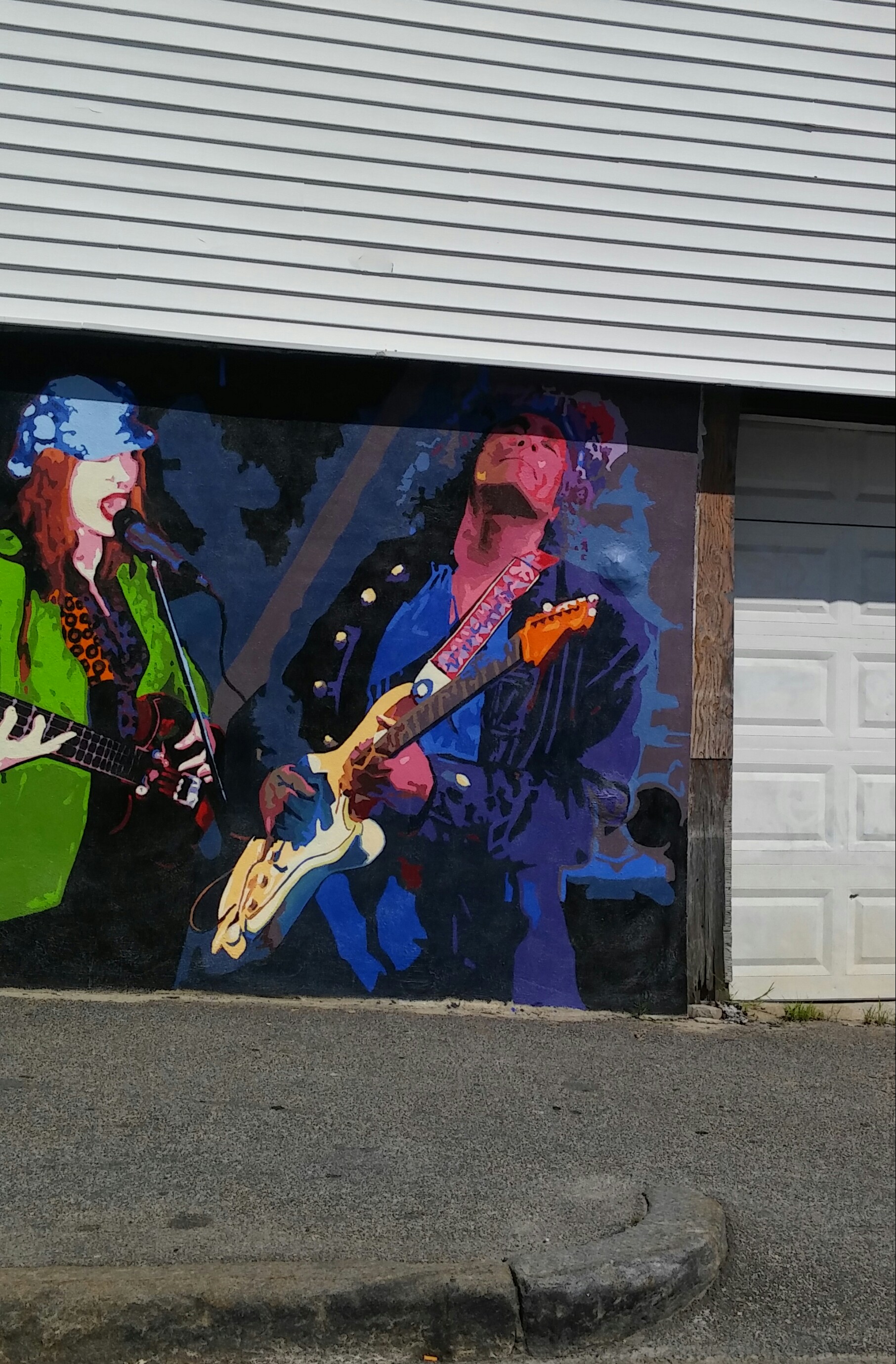 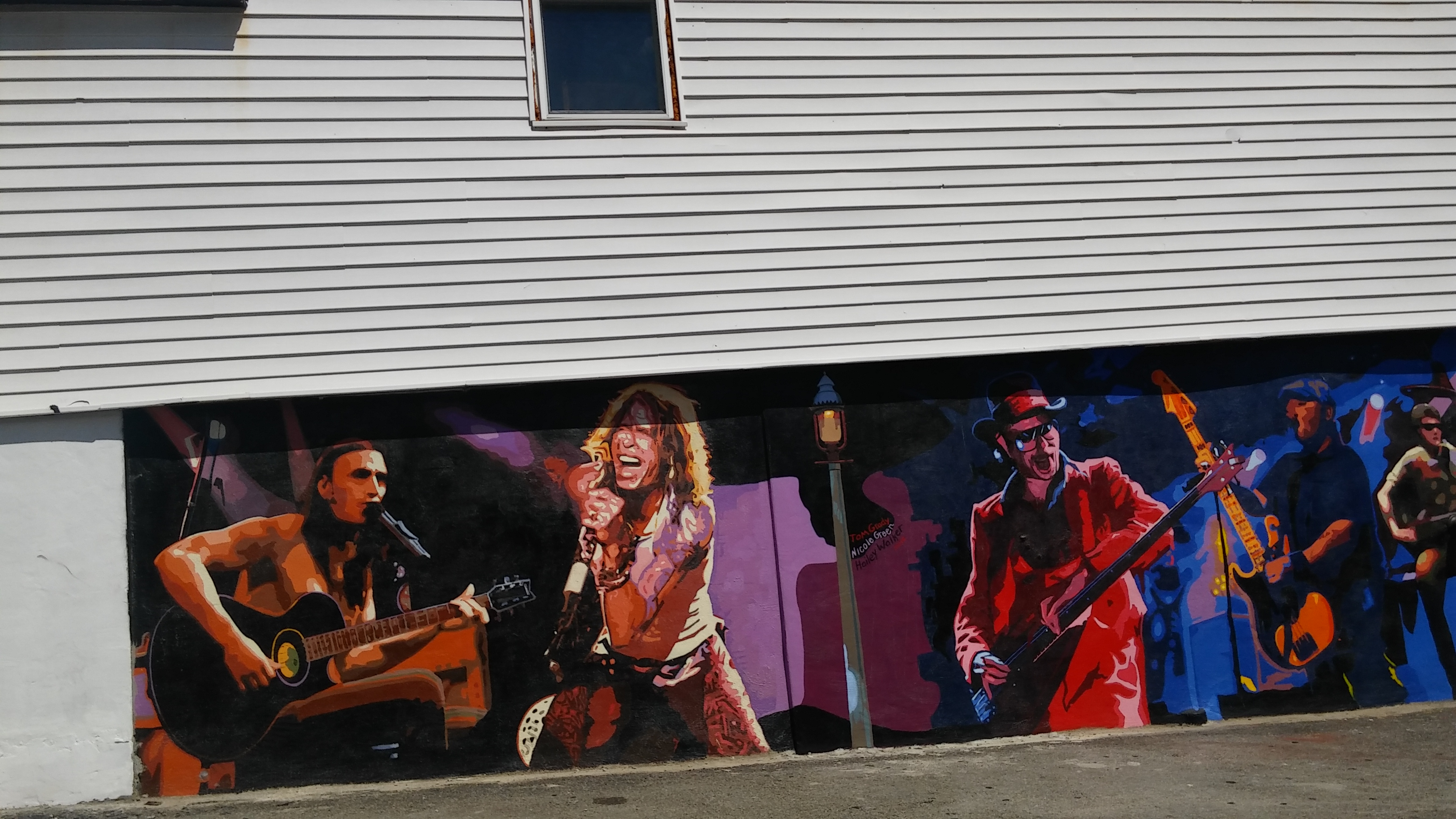 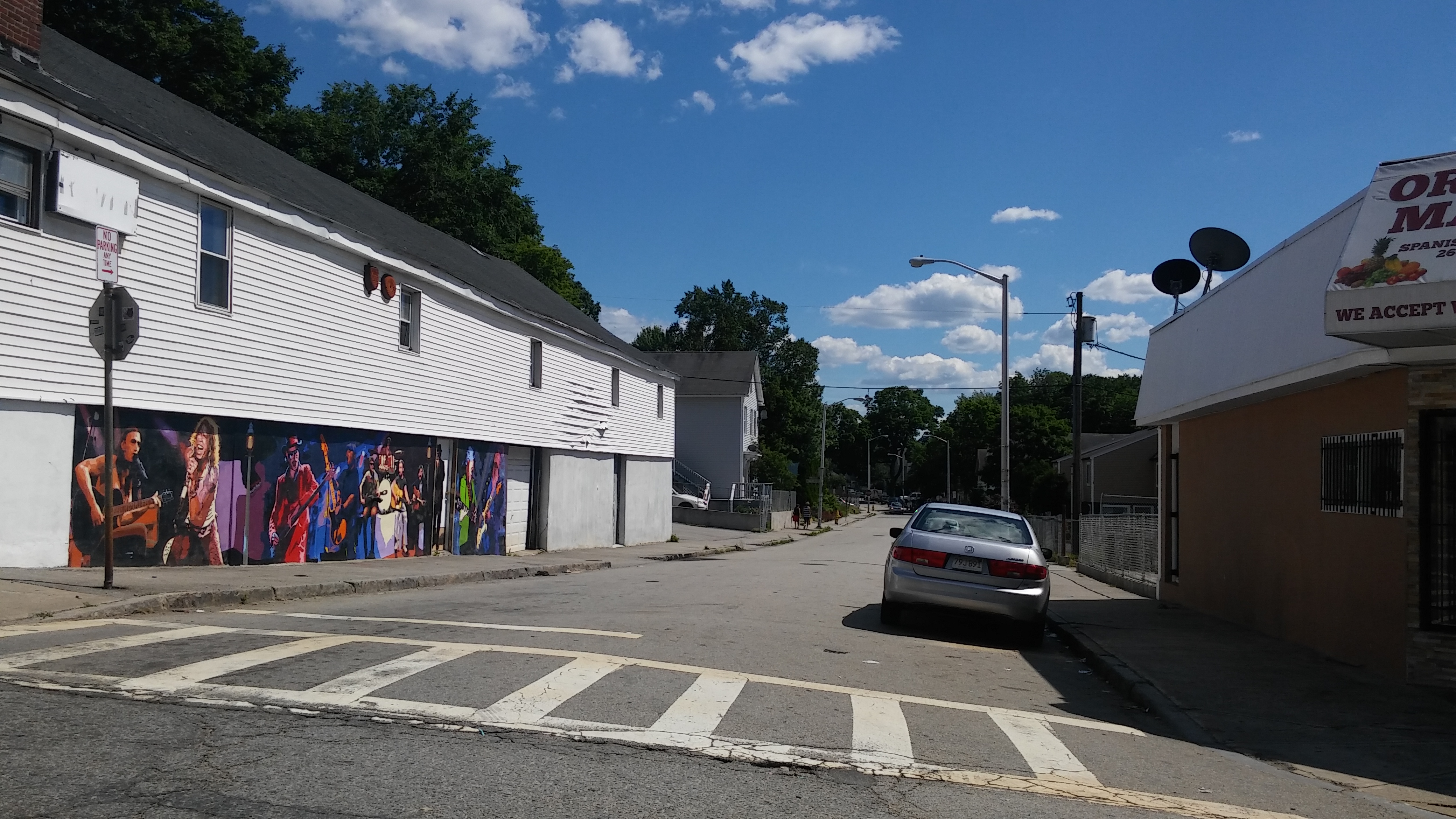 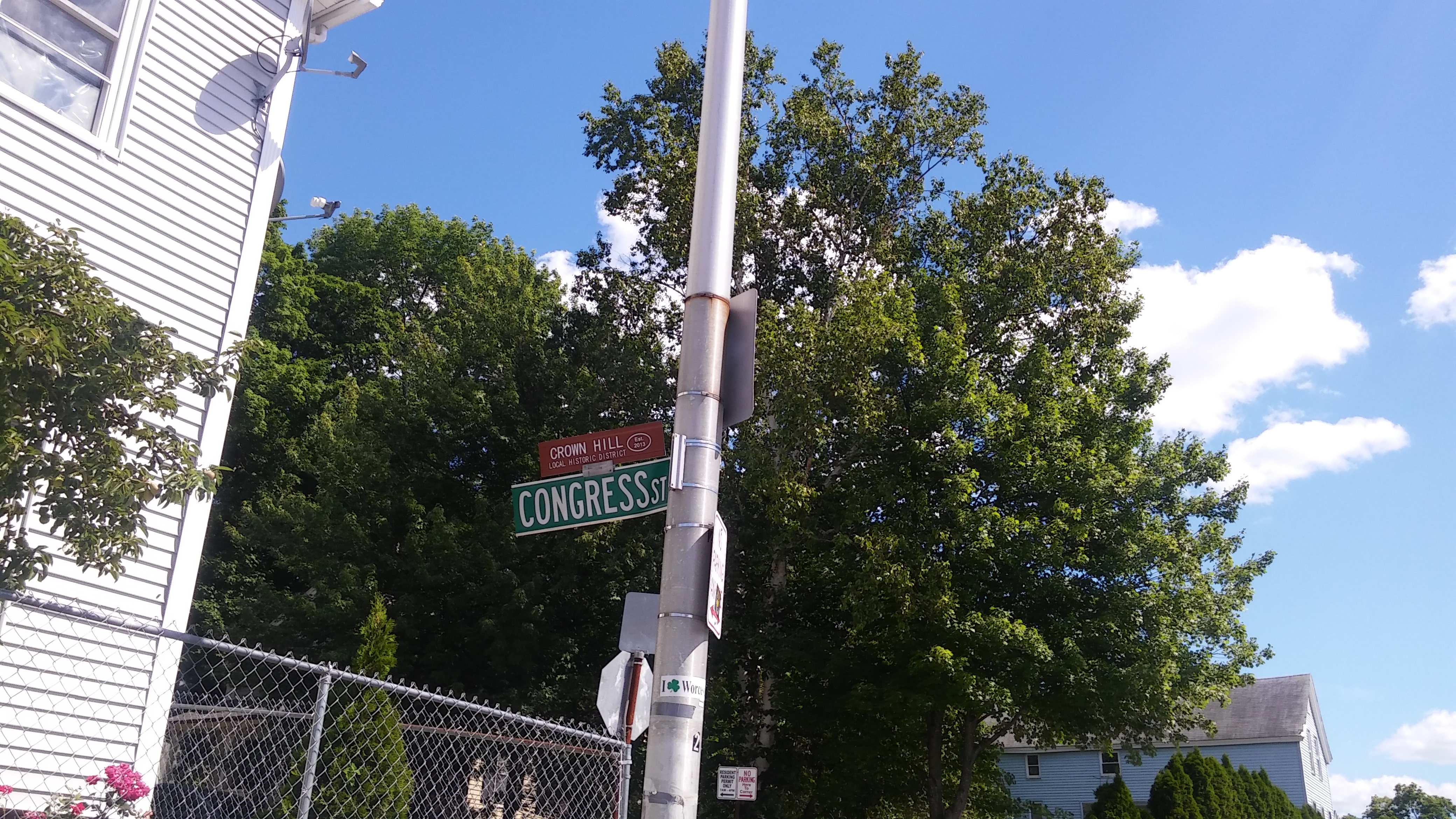 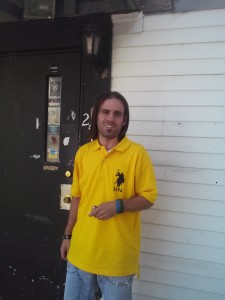 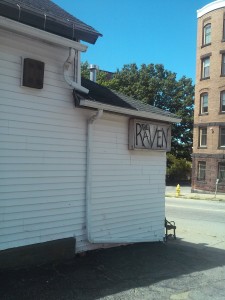 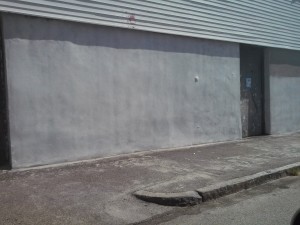 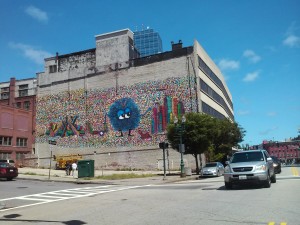 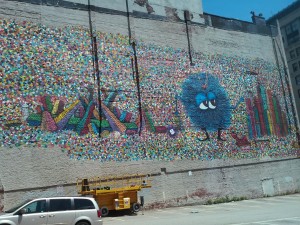 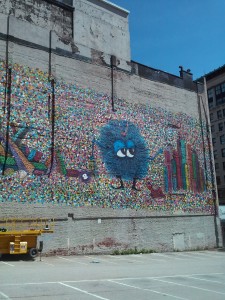 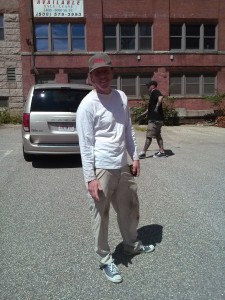 … if that’s what I see (my suggestions to him).

He says it’s up to us to get what’s up on the wall of the Denholm Building in downtown Worcester.

I asked Caleb what he was thinking about when he painted his mural…. What was he trying to depict/feel…

Much hemming and hawing. He did say, very clearly:  “My wife works in Worcester.” He also said he’s been trying to paint murals in Worcester for years…

1. He may be kinda “connected” – very important in  Worcester – meaning InCity Times’ former illustrator and TOTALLY TALENTED AND INTELLECTUALLY HONEST muralist, Pito, the Latino wonder, had no fucking chance of getting this gig…

2. and Caleb was/is gonna try to keep the powers that be in Worcester happy (slap happy?) so that they can keep giving him work – the chance to do more cute art in Woo …

We have a heroin problem! Nine maybe 10 bodies dead due to drug overdose in 8 days!

Our economy is a tad better than most Gateway cities, but we need more jobs. We’ve got tons of poor folks. PLUS: There was a NOOSE found in the US post office branch in the DENHOLM building where Caleb painted his mural!!

This mural seems fun and cute…Still what do the down, battered buildings mean on the left? Why are they up straight to the right? What was Caleb’s point??? We suggested to Caleb, when we pounced on him this afternoon and took pics of him and his mural, that the blue fuzz ball he painted in the middle was happy postive feelings and maybe this was gonna make downtown Worcester strong and  happy again. He said his blue fuzz ball was a female, as it was sporting a ribbon.

Wish the ribbon-sporting blue fuzz ball  hadn’t been painted on such a big prominent spot in the city!

But it does pretty things up!

Now if it had been Pito: Pito would have shared more than Caleb: Pito told us and would tell you, anyone – that he was arrested years ago and thrown in jail for a crime he did not commit. It fucked him up. Left him angry and sad. His illustrations for InCity Times showed that. Some of his murals were a tad foreboding… but they could also be light and happy! Pito painted, among other walls,  the former COW JUMPING OVER THE MOON MURAL at the Corner Grille over on the West Side – up on Pleasant Street, by Richmond.

Pito could be moody,  sensitive, tough … real. He didn’t kiss up to anyone!

If the City of Worcester big wigs AND THE ARTS “COMMUNITY” wanted something cute and frivolous Pito would have obliged and come up with something great. AND they would have been supporting a WORCESTER ARTIST, a WOO PERSON OF COLOR whose friends and relatives would have flipped! Somone whose former teachers and co-workers, etc etc could have crowed about to EVERYBODY!! A guy who is challenging! TRUE…

We took this pic of the sad looking side of the DB several months ago  – and said the building was crying out for a mural! InCity Times has been pushing for more murals in the city for years! Well, we and thousands of other Woo folks got our prayer answered! We only wish the city had hired our ol’ pal PITO, a young Latino man, Worcester born and bred,  a guy who has created tons of street art in Woo, taken classes at the Worcester Art Museum and would have come up with something amazing!

Giving a LOCAL LATINO ARTIST – a TALENTED local artist – such fantastic exposure would have been so GREAT for Worcester.

Instead, a Cambridge-based artist landed the job. We wonder HOW he was chosen – how much outreach was done to minority, local artists. I’m sure the chosen muralist is nice and talented, BUT WORCESTER COULD HAVE AND SHOULD HAVE GONE LOCAL!

Well, as long as things are happening …  We can’t wait to see the painting begin!

EXCITEMENT for our downtown!!! Hooray!!!

Here is the Denholm’s Building on Main Street crying out for a mural. Seems we will be getting one as the City of Worcester conducts a nation-wide search for the perfect painter/graffiti artist.

Why bother searching when you have a great painter under yer nose?!

His tag is PITO and 12 years ago he worked for INCITY TIMES while creating great art all over Worcester walls. He had gone legit and was getting paid to do projects, most notably the huge cow jumping over the moon mural on the side of the Corner Grille on Pleasant Street. PITO also created the cool faces on the side of the now gone JAVA HUT. Pito is Latino, a bit taciturn … an enigma. All artist. Years ago I thought our PITO would take off big time. He was difficult but wonderful. You put up with the games cuz he was young, you knew he had some heavy emotional baggage and his murals were fucking amazing.

Sad to say PITO seemed to disappear from the Woo scene … only to reappear several years later at a local tattoo shop.

PITO, I screamed when I saw my young friend in the city. He didn’t look happy. I guessed it was because he wasn’t doing his art.

After I left the tattoo shop I called city hall and talked with the city’s culture czar – I don’t remember if it was Erin. I told the woman all about PITO, that he was gifted and asked: Could he create some art for the city?

The woman was polite but detached. A strictly by-the-books kinda lady. The kind of emotionally constipated bureaucrat Worcester City Hall is filled with. She said PITO would have to fill out a grant application. Then folks would look at the application –

Just go out and look at his art! I said. You’ll see it all over the city. Meet PITO!

I called PITO and gave him the info. He didn’t seem thrilled with the idea of filling out a lot of paperwork.

A month later I got back in touch with him. Seems my hunch was spot on. He told me softly that the application form had to be filled out, lots of written work.

I sighed. A lot of street artists aren’t comfortable with writing essays, etc. And this Latino kid may not have had the writing skills of a college educated kid. He just let the opportunity slide ..
. And, of course, he wasn’t good at the political side of things. Actually, kinda rebellious. And he wasn’t connected in any way ….

Thank you, City of Worcester!! Because the arts expert couldn’t get off her ass and leave her office and just SEE PITO’S work, we missed out on some great art for Woo!

THIS TIME AROUND LET’S:

* nurture our home grown artists! Let’s hire and work with them!

* Let’s reach out to street artists – kids that may not have gone to art school but are super talented! Let’s give them scholarships to WAM! Let’s get them working in our city!

* Let’s help folks who may struggle with writing. Let’s help them fill out applications/do paper work.

* Let’s have an arts person who speaks Spanish and Vietnamese and can do out reach into these communities to find Woo’s artists!

* Let’s get beyond the toxic, back-biting clique that prevents new voices or different voices from being heard! Let’s REACH OUT IN UNCONVENTIONAL WAYS TO UNCONVENTIONAL PEOPLE!