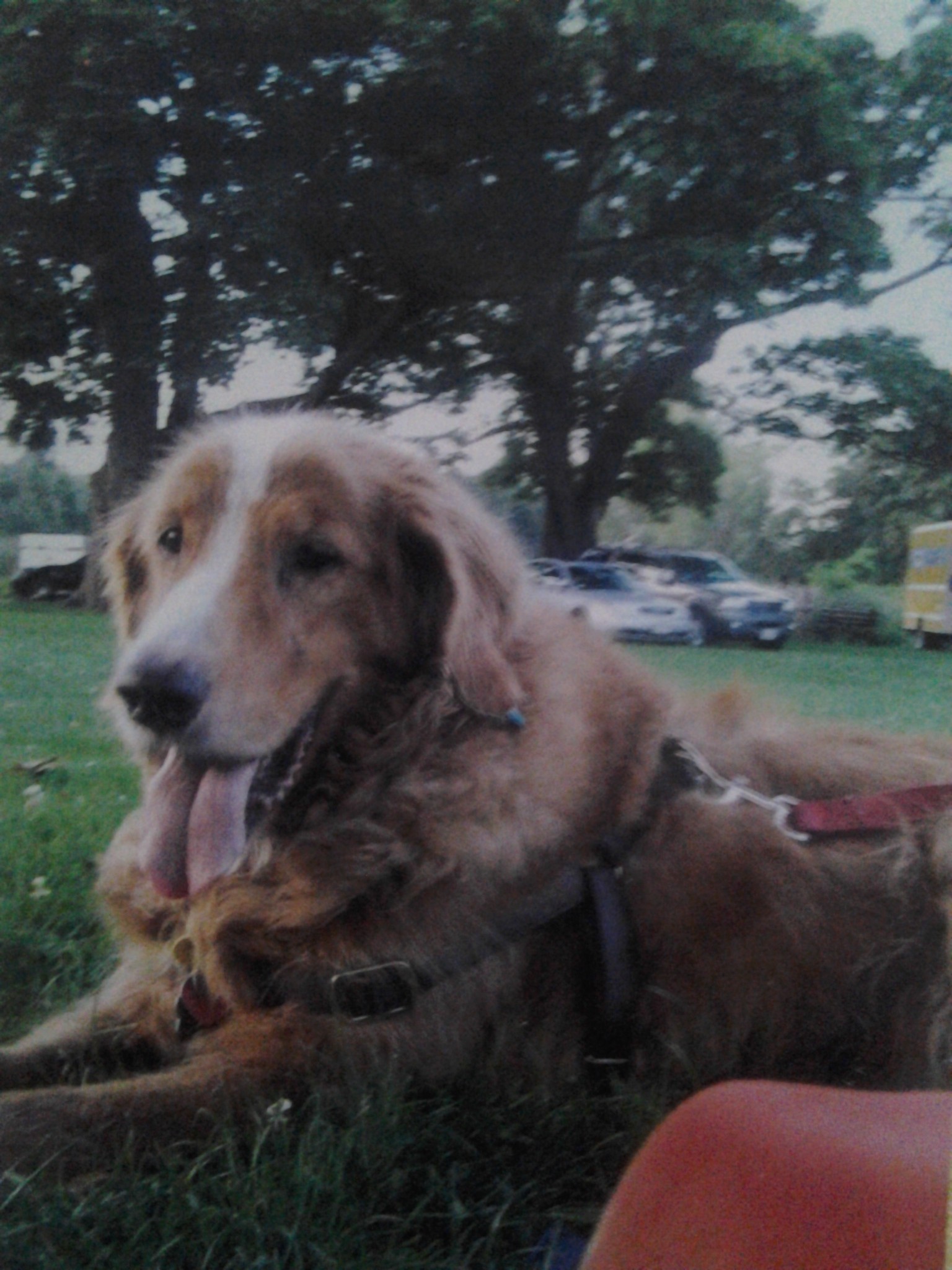 editor’s note: Here’s a pic of Rosalie’s late best buddy, Bailey. Bailey was a senior – 8 years old – when Rose adopted him. His original owner lived in Holden. The person had to give Bailey up. A super strong, rambunctious 84-lb Nova Scotia Duck Tolling Retriever was just too much for the guy who was in poor health. Rose fell in love with the gorgeous Bailey and took him home as soon as she set her hazel eyes on him! Bailey was Rose’s rock star dog! So beautiful people would stop her on the road to pet Bailey or even have a photo taken with him! He was that gorgeous!

Rose lived in Holden for about a year, before she moved back to the Woo; she always feared that Bailey would run out of the Holden house she rented and make a mad dash for his original owner’s place.  He never did. He fell in love with his new InCity Times life (on the road with Rose at all times!)! Even though our yard wasn’t enclosed by a fence, Bailey NEVER strayed from the huge chunk of land that came with the house. He did, however, “perk up” when Rose drove by the vet’s in Holden.  But that was all …

Bailey passed away four years later from nasal cancer. He was 12 years old – and a cancer survivor, thanks to the Old Injun Fighter who payed for the tests/biopsy and  for the (first couple of rounds of) Bailey’s chemo meds and pain pills. He adored Bailey …

Each year, millions of dogs enter shelters where many of them, if they’re lucky, get adopted by new owners. Likewise, every year outside of shelters, many dogs get handed down and passed along to new owners, whether because of hardship or inconvenience to the owner. New owners may wonder whether their adopted dogs remember previous owners, and the answer is: It depends on the dog, but evidence seems to suggest they do.

Humans, unlike dogs, have a concept of time known as “episodic memory,” using artificial measures of time, like seconds, minutes, and hours, to distinguish events. Also, we tend to remember when something happened by relating it to other events. Dogs, on the other hand, can tell how much time has passed only since the event happened. Still, that doesn’t mean dogs can’t remember the past, or people from the past.

Dogs remember for other reasons, too. It’s commonly believed they remember what they need to in order to survive, or because of fear. Dogs remember past unpleasant or dangerous circumstances to avoid having similar situations in the future. Finally, a type of survival memory is connected to remembering friends, owners, and those people with whom dogs generally feel safe and can trust. Therefore, if a previous owner was kind, the dog may well remember him.

Dogs do have long-term memories, especially for those whom they love.
As in “Argos the great dog who remembered.” Argos, as told in Homer’s classic, The Odyssey, waits 20 years for his master, Odysseus, to return finally from his worldly travels. As soon as the dog recognizes his long-lost master, he has strength only to drop his ears and wag his tail, and then dies. True, it’s a sad story, but it has become a strong metaphor for the faithfulness of dogs.

A dog’s capacity to learn is associated with some memory rather than true understanding. The dog may not understand why it is necessary to sit when the master gives the command but the dog will certainly remember and anticipate the treat that will be received. The dog will remember that sitting = treat.

Associative memory, especially unpleasant ones can stay with the dog for a long time. A dog that has had a traumatic experience in a vet’s office will have a negative reaction as soon as door to the vet’s clinic is seen. The smell, the vet uniform and the people in the waiting room will be remembered by the dog. The door or even the car ride is associated with an unpleasant memory. This unpleasant memory can only be changed with positive associations. The car ride that was associated by the dog to vet visits can be replaced with trips to the dog park.

Dogs are amazing animals, often exhibiting some of the same personality traits and nuances as humans. It is likely because of these traits and behaviors that people become so closely attached to their canine companions. Unlike humans though, it is difficult to study the inner-workings of a dog’s mind. Still, it is evident that dogs do have long-term memory capability even though it varies from that of long-term human memory.

Just as our senior citizens are sometimes disregarded or brushed aside, so too are senior pets.

Older dogs are the least likely to get adopted, but are usually the best to take home.

Older dogs lose their homes for many different reasons,most of them having nothing to do with problems the dog has, but rather with those of the person or family surrendering the dog.

Many folks think dogs who end up at shelters or in rescue are all genetically and behaviorally inferior. But, it is not uncommon for very expensive, well-bred, well-trained dogs to outlive their usefulness or novelty with folks who bought them on impulse and no longer want to take responsibility for them.

Veterinarians say that dogs start to fall into the category of “senior” around the age of 7. However, it depends on size. The smaller the dog, the later in life the dog becomes a senior. Nonetheless, a dog in a shelter can be as young as 5 and still have trouble finding a new home.

Many people automatically think of a puppy when they think of adopting a dog. Puppies are warm and cuddly, and everyone wants to hold and pet them. But puppies demand patience and energy to help them become wonderful family members. Older dogs, however, can be as cute and lovable as puppies, and they often come with many wonderful qualities that puppies take years to grow into.

Five million dogs are killed yearly in U.S. shelters and it is the older generation that goes first. Here are five reasons why to think about adopting an older dog:

1. Older dogs are wiser and calmer. They will more than likely to bond with you on a mature level.

2. Senior pets tend to appreciate the love and care of their owner and the fact that they have been given a second chance of happiness. Older pets in a shelter may suffer from depression because dogs go through a mourning process just like humans do. When a pet is abandoned they form a deeper bond with their new owner, they are more dedicated to making the home happy because they fear being abandoned again. This is your chance to give them joy, and to get that joy back tenfold.

3. Although older dogs may have health problems they do not generally require as much attention and care from you as they start to wind down in their old age. A shorter walk in the woods becomes more preferred than a two hour jog around the fields.

4. Older dogs are often trained to follow commands and are usually toilet trained.

5. Older dogs are easy to assess for behavior and temperament.

Maybe you are reluctant to adopt a senior dog because you fear that your time with your new best friend will be short, bringing that painful time of loss closer. But the privilege of loving a senior dog makes every single day special, as you and your companion share love, friendship, and a special relationship that grows stronger with the knowledge that you have given this fine old dog a second chance at life. The love that grows from this knowledge is stronger than the pain of eventual separation.

While you weigh the risks and benefits of adopting an animal, take a moment to ponder the power of adopting an older pet. If you have the opportunity and resources to enhance the rest of an older pets’ life, embrace it with both arms.

We all deserve to live out the last years of our lives with dignity, love and respect. Give a senior dog a second chance at life and you’ll find the experience will change your life.