This time, Paris took the hit: as I write this, on Saturday night, there are 129 dead, 352 injured – and among the injured, 99 are “critical”. The carnage was spread out over 6 sites in two Paris districts, and included various sites:

At 9:20 p.m., at the “Le Carillon “ bar, a witness heard an explosion. Ten minutes later there were two explosions just outside the Stade de France stadium, where a soccer match between Germany and France was in progress (France’s President Hollande was there and he was rushed out to safety immediately – though the game was allowed to continue)

The worst part of this attack took place at the Bataclan Theater on Boulevard Voltaire, where up to 100 people were taken hostage by masked men with machine guns. Inside the theater, gunmen opened fire on the hundreds watching the American “Eagles of Death “ Metal group. It was at this theater that the largest number of victims died: the number is believed to be 89, at this time. One of the attackers was shot dead, and 3 blew themselves up.

Later we heard on the Sunday evening news that there were believed to be 8 terrorists involved, and seven had been killed, but the eighth was still at large. There was some mention that ISIS was involved, but it is really too early to have ascertained who was responsible, and even more difficult to answer , WHY it was done.

I am very much saddened by this, yet another attack on innocent civilians, and in a city that I have always loved – and which holds so many great memories for me: when we had to flee Germany in 1933, we landed in Paris, where we lived for three and a half years, and on the outskirts for another 3 years. We were there in June of 1940, when the Nazis invaded and threatened to destroy the city if it was defended; we (my brother, then 7, and I at 9 years  of age, and my mother) fled on foot – my father was in an internment camp somewhere in France –walked for 11 days just ahead of the invading barbarians until finally, when we reached Limoges, an armistice was signed.

I have since visited Paris in 2001 – and it is still the beautiful, vibrant, indestructible city I had remembered – despite the bombings, the occupation, the trials and tribulations of suffering through World War II: indomitable and indestructible. And I know it will be again, rising each time like the Phoenix from the ashes, and rebuilding better than ever.

Perhaps again before I grow too old I can revisit the Rue de Lacretelle, pick hyacinths and violets in the Bois de Boulogne, and see the stunningly beautiful Cathedrals Notre Dame and Sacre Coeur – and perhaps even climb partway up the Eiffel Tower.

But most of all I will remember to thank the French, who saved us several times over… and I will think of them now once again as they struggle to regain their balance. Few will try to do all we can to repay  our many debts in their hour of need.

I managed to eat a bit today … a handful of cashews, cheese and toast, a brownie. Traumatic news traumatizes me. Delivering InCity Times today, meeting all the great people of Worcester (like the sweet lady pictured below), pulled me out of my sadness and fears … 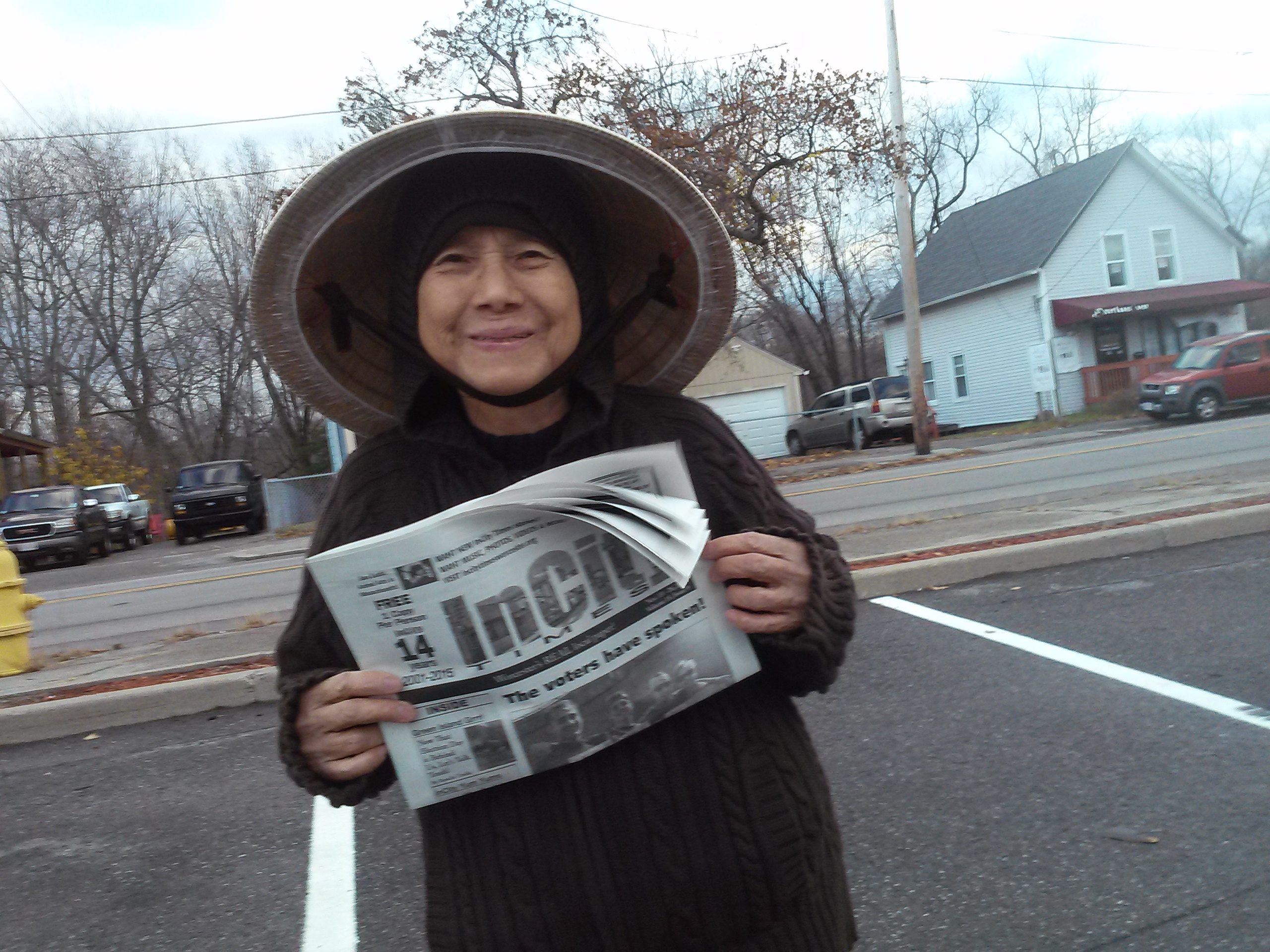 When will this global nightmare end – this “World War III, in piecemeal”?

This is a gift to the world!

If you have a smart phone, e-book, tablet, laptop or desk top computer go to:

– text and photo by Rosalie Tirella