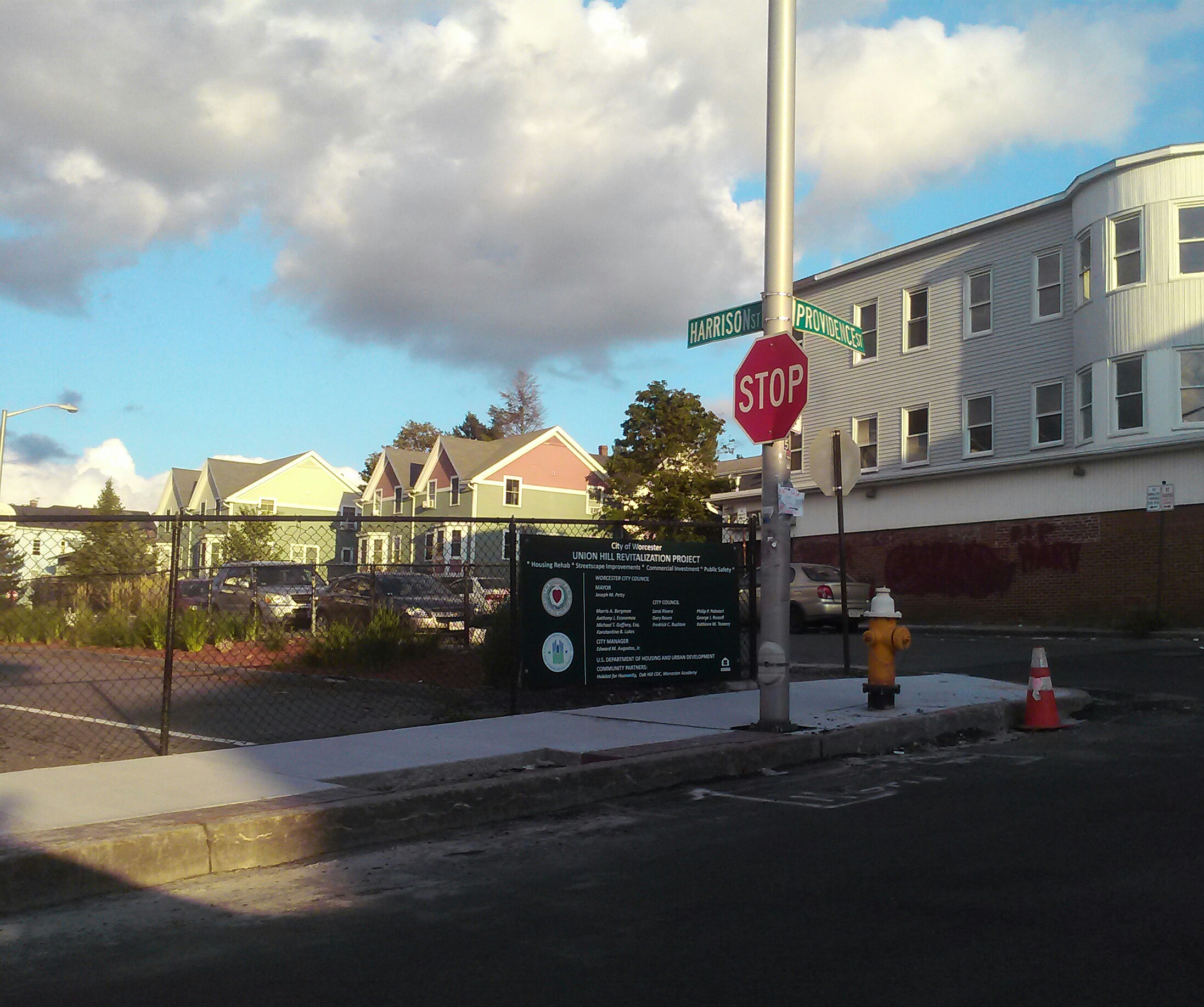 Take a ride or walk up Harrison Street to where it intersects with Providence Street.  Look at the parking lot on the corner with the black cyclone fence.  On it is a large green sign with” City of Worcester” printed at the top in white letters.  Underneath it in larger letters are the words “Union Hill Revitalization Project.”  Below that it says “Housing Rehabilitation, Streetscape Improvements, Commercial Investment, Public Safety.”  Now, look around Providence and Harrison Streets and see what it says on the sign gradually becoming a reality in the surrounding neighborhood.

The program was the focus of a press conference and brief tour held on the afternoon of August 17 in the Worcester Academy Alumni House parking lot at 51 Providence Street.   According to Mayor Joseph M. Petty “The Union Hill neighborhood of just two or three years ago is not the Union Hill of today.” The Mayor had made the neighborhood a priority of his administration because he saw “a neighborhood that had slid into disrepair.” What he was referring to was the local elementary school, Union Hill School on Chapin Street, being designated as a Level 4 school, neglected houses – some with numerous code violations and a growing crime problem.

What is responsible for this gradual change in Union Hill is a unique partnership with the City, HUD, Habitat for Humanity, Worcester Academy, Oak Hill Community Development Corporation and local residents, businesses and property owners. 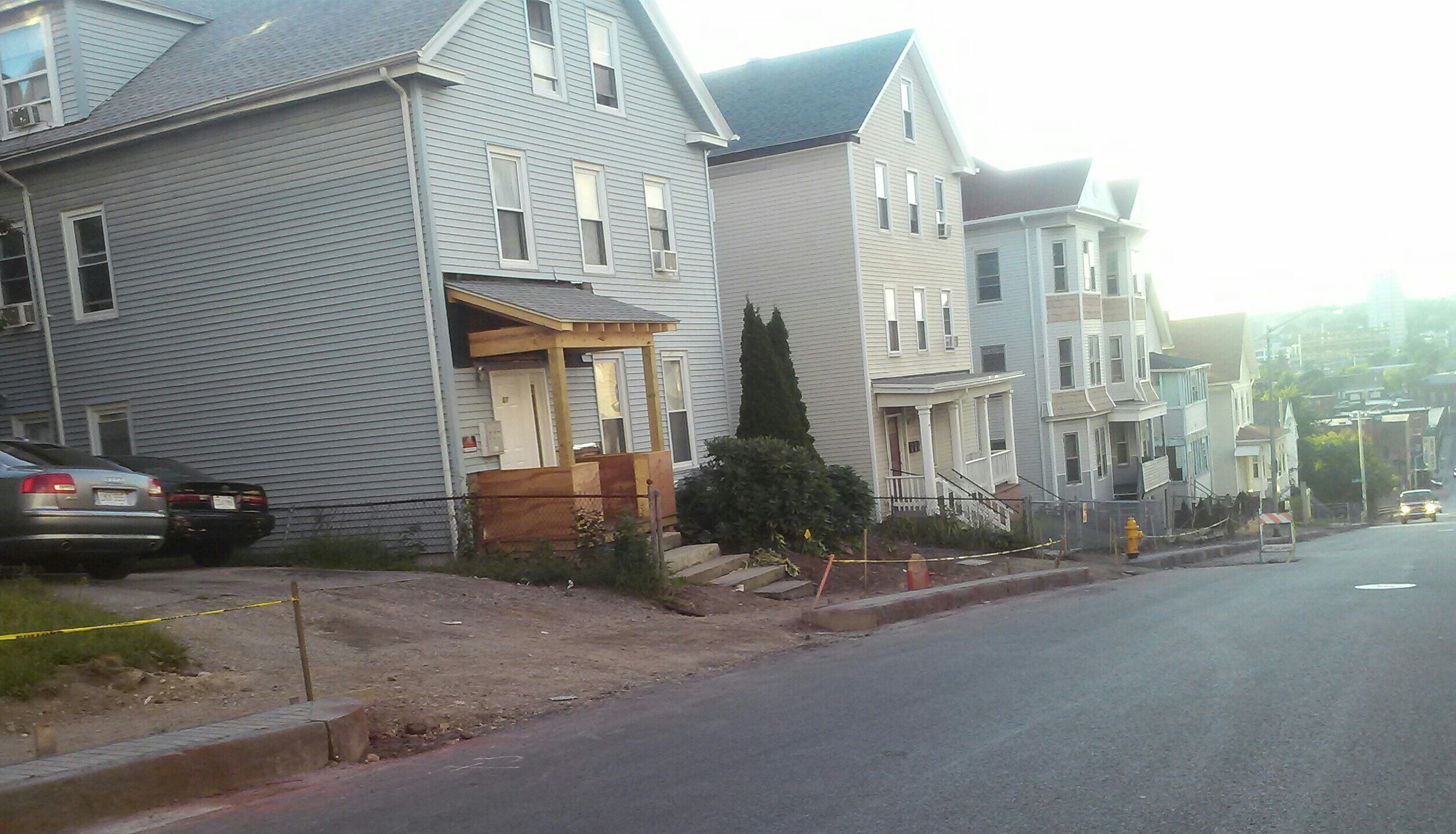 The most visible sign of improvement is the streetscape program taking place on Providence Street and Harrison Street.  With most of the money coming from Community Development Block Grant funds from the United States Department of Housing and Urban Development, the program involves resurfacing the roads, replacing sidewalks with a combination of concrete and bricks and handicapped accessible corners and the planting of trees.  New features are the bump out curb extensions installed to make crossing easier.

Housing stabilization and creation will get a big boost from this special forming of partnerships.

An extensive sweep of the housing stock in the neighborhood was done by members of the  Inspectional Services, Fire and Police Departments.  The City worked with landlords to bring the properties up to code.  Nine owner-occupied homes will be rehabilitated on Providence and Harrison Streets and five new units of housing will be created on Aetna and Arlington Streets.

Nearby Worcester Academy, located at 81 Providence Street, recently donated 21 Aetna Street to Habitat for Humanity Metro-West/ Greater Worcester.  The existing house will be taken down and a duplex will be constructed in its place.  Tim Firment, Executive Director of  Habitat , announced that his organization will also sponsor “A Brush with Kindness Week “ and assist a property owner on Harrison Street with porch and landscape work. Also, in an ongoing effort to help homeowners, Worcester Academy has also made available $300,000, administered by the Worcester Community Housing Resources, for home improvements in the neighborhood.

According to Ronald M. Cino, Head of School, “Worcester Academy is improving the quality of life for the Union Hill neighborhood by making significant contributions to education, recreation, housing, safety and economic development. Worcester Academy has completed the acquisition of the old St. Vincent’s property.  In addition to sharing use of Morse Field, an award- winning lighted synthetic field on the property with neighborhood residents, schools, and community groups, Worcester Academy is converting the hospital’s generator building into a first-rate performance center that will open late this fall.”

Oak Hill Community Development Corporation, located across the street from Worcester Academy at 74 Providence Street, has been involved in housing since 1972.  According to Mullen Sawyer, Chief Executive Officer, Oak Hill CDC ”worked closely with neighborhood stakeholders and funders to create a 21st century investment plan and funding mechanism to serve this neighborhood: Investing in Union Hill Plan.  This Plan outlines holistic strategies to preserve and develop housing, promote and sustain business and workforce development while improving neighborhood economics and quality of life.  The commonwealth has accepted our Plan and awarded Oak Hill CDC nearly a million dollars in new state rebates to spur public to private investment of this Plan.”

In addition to housing, streetscape, private investments and public safety and health, revitalization is taking place at Union Hill Elementary School.  The school which was designated a Level 4 school is now a Level 1 school.  It is undergoing renovations thanks to State funding. New windows have been installed and other exterior and interior improvements will take place.

As the press conference was taking place, neighborhood children were seen across Providence Street.  City Manager Edward M. Augustus, Jr., who had referred to the broken window theory in his speech, said “This City has not forgotten this neighborhood.  There are a lot of kids who call this place home.  We need to make sure they know they’re important to us.”

State Senator Michael Moore praised the City by saying “These ongoing and carefully executed investments will continue to help to bring vitality and desirability for current and future residents alike.  I want to commend Mayor Petty, City Manager Augustus and all the departments who have come together to breathe life back into this part of the City.”

City Councilor George Russell whose District 3 covers a good part of Union Hill said “we should not look at it as Mission Accomplished and instead look at it as the beginning of a long road to hopefully revitalize the entire area and most importantly make folks feel good about investing and living in the neighborhood.” 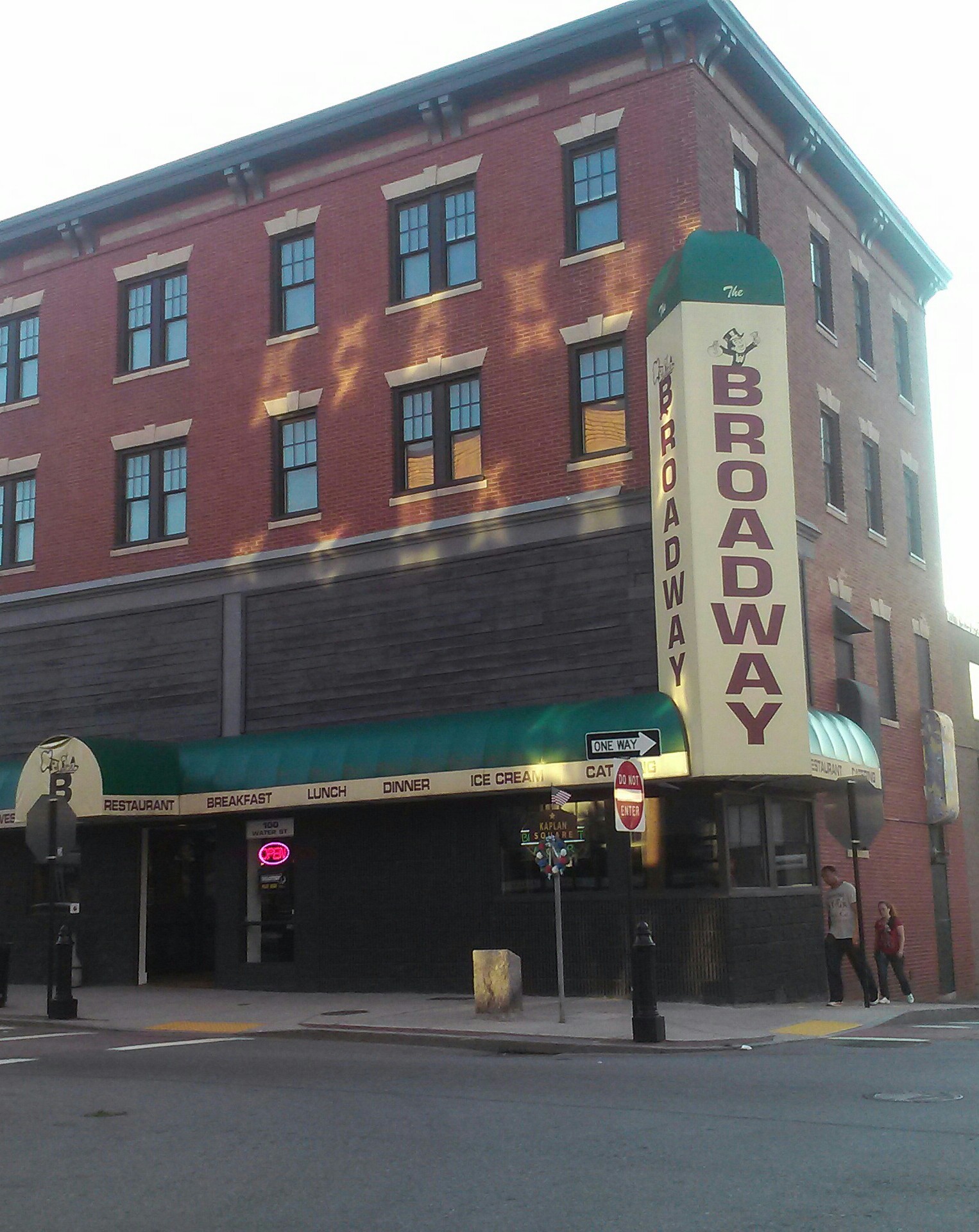 State Representative Daniel M. Donahue sums it up this way “ The community policing district has created a new feeling of safety, our local elementary school has gone from failing to a level 1 and we are making strategic investments in infrastructure and stabilizing our owner occupied housing stock.  This could only be accomplished by working together, from our local police to our teachers to community leaders and residents to the different levels of government, we have come together to make change.”

Central Mass Dept. of Children & Families workers call for immediate health, safety inspection to declare building safe for children and families they serve
WORCESTER – Social workers and community allies are poised to stage an informational picket TODAY at noon over health and safety concerns at the Department of Children & Families (DCF) Worcester facility. The delegation will elevate its demand for an immediate health and safety inspection of the DCF East and West Offices  – 121 Providence Street in Worcester. Conditions in the partially abandoned building have continued to deteriorate in recent months, leading front-line staff to worry if the facilities are safe for the children and families they serve.

For months, social workers and support staff have expressed concerns over the structural integrity, safety and security of the Department of Children & Families facilities in Worcester. Major leaks have reportedly led to water seeping into elevator shafts and at least one ceiling collapse, raising questions of mold content and air quality. Demolition of portions of the building has left exterior walls exposed to the elements, and many interior doors and locks appear to be malfunctioning – prompting serious concerns over illegal access to DCF facilities and abandoned areas within. Even routine maintenance has fallen behind, with staircases and hallways visibly cluttered. DCF workers penned a final letter outlining these health and safety concerns, calling for a response by Wednesday, June 26. A full response has yet to be received. [See full letter below.]

The Providence Street facility provides a variety of services to Department of Children & Families clients throughout Worcester County – including domestic violence counseling, supervised visits for families and case management for children in foster care.  Today’s informational picket will call on concerned residents to contact their legislators and urge immediate action to inspect and address health and safety concerns at DCF facilities.

WHO: Social workers and community advocates urging prompt action to ensure local facilities are safe for the children and families they serve

WHERE: Outside the Department of Children & Families Worcester office: 121 Providence Street – Worcester, MA 01604

We have comprised a list regarding the safety and wellness of our work environment.  We request the following issues to be address and responded to by Wednesday 06/26/2013.

The membership is requesting a copy of both State Elevator Inspection Certificates no later than 06/18/2013.  As you know they are not posted in the elevator.  We would like the most current inspection report.  On Friday 06/14/2013 Mr. George Ramian from the Office of State Elevator Inspection had many concerns regarding the status of both elevators, including water running though the elevator shafts, lack of lights, and the water collecting at the base of the elevator.

We request that our local fire department to conduct a comprehensive inspection the safety of the building.  We would also like a mock fire drill to ensure all workers and people from the community know how to exit the building.  We also are requesting a copy of the complete report.

We request a completed assessment from a certified structural engineer, as you know the building has many leaks and has caused damage to the integrity of the building.

We request to have a copy of the current Occupancy Permit.

We are concerned with the lack of exits in this building. The doors that are intended for use malfunction by way jamming and the locking system failing.  We have concerns that people may be accessing unauthorized areas within the building.  We are requesting that all the doors and locks be repaired immediately.

We also are requesting a written document which outlines and speaks to the overall heath and safety of the building.

Thank you for your immediate attention to this matter.

Department of Children and Families

Michelle Jones invites you to join her for this free program. The holiday season is fast approaching. There are preparations to make ready for our celebrations with family and friends. Amidst the hustle and bustle are you taking time to care for yourself?.

11-12 pm Special Performances by the Senior Center and South East Asian Chorus and much more….

1-2 pm stay on after lunch for a Sing-A-Long with the chorus.

Keep an eye out for a special elf to help with raffles.

Quinsigamond Community College will have specially prepared gingerbread men made up for you to frost and enjoy. Please stop by the front desk to sign up for some fun.

Amy and friends return with a special holiday craft to make and bring home.

Holiday Favorites for all Ages

Enjoy an afternoon with everyone’s favorite pianist Scott Berryman. Scott will perform a special selection of holiday favorites and as always will take requests. Refreshments sponsored by the Blaire House.

The Worcester Senior Center, which sits atop Vernon Hill at Providence Street and was once the home of the St. Vincent Hospital School of Nursing, is 10 years old. And as amazing as it may seem, this municipal gem of a building, an institution for our city, was the clumination of a hard-fought battle. Many of our outstanding seniors who led the battle for the establishment of a Senior Center in Worcester are no longer with us, and for them and their efforts and the personal contributions they made to this city, their families and the businesses, schools and workplaces, I ask each one reading this article to honor them with a moment of silence … .

I first got involved in the fight for a senior center for Worcester in 1976, while I was working as an aide to former US Senator Edward W. Brooke, R-Massachusetts. Someone had written a letter asking if the Senator could help Worcester join other communities around Massachusetts that had built senor centers for their elderly. At this time the Director of the Council on Aging was Milton Bornstein. The Senator gave a letter to me to research and act on; I immediately began contacting the legislative leaders, including former State Senator Dan Foley, Representative Robert McNeal, Representative Tom White, Congressman Joe Early, City Councilor Tom Early, Joe Tinsley and City Manager McGrath and other political leaders prominent at that time.

Back in 1976, Worcester was an industrial power house. END_OF_DOCUMENT_TOKEN_TO_BE_REPLACED