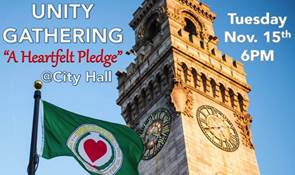 The Heart of the Commonwealth – WORCESTER Beats for EVERYONE!

We stand in solidarity speaking as mothers, fathers and parents, to the Refugee and Immigrant families who have fled pain-filled pasts to come to our city and also to those who count generations here; this city is YOUR HOME, it is OUR HOME.

You are welcomed here, we are glad you are a part of our community and grateful for the many contributions offered through your presence. You are not only welcomed here you are appreciated and LOVED here!

For years we have reprinted, emblazoned and trumpeted our City as the “Heart of the Commonwealth.” Today we are being challenged to make these words mean something. The events across our country and Commonwealth have challenged us to put our words into meaningful action.
As the heart of Massachusetts, Worcester must be a community committed to justice and ready to defend justice. We pledge today as community leaders, elected officials, community organizations and faith leaders to be voices that reject hate and racism.

We pledge to challenge and resist those attacking immigrants and refugees, our transgender GLBTQI brothers and sisters, Blacks, Latinos, and those who practice the Muslim faith.

We pledge to rebuff those who seek to create discord and hate.

We pledge to denounce and challenge those who choose to demean and attack.

We pledge to use our collective power to support and protect anyone who may be targeted because of who they are.

We know that many are fearful of the climate of animosity, racism, bitterness and hatred that has been stoked over the past few months.

We will not be part of going backwards.

We seek working together to ensure that, as the Heart of the Commonwealth, the only BEAT you hear in Worcester is that of LOVE and not hate.

Come Help us Share in the HEARTBEAT of LOVE!

On April 1, 2016, City of Worcester Chief Development Officer Michael Traynor got out of his car at Worcester City Hall and berated a Black man who was letting his family off on Front Street.

Of course, the Black motorist complained to the Worcester City Manager’s Office and to Dr. Carter, the recently hired City of Worcester Chief Diversity Officer.

There was an investigation conducted.

We soon found out that Dr. Carter has no authority or power on racist incidents of which City of Worcester employees are accused.

It is not clear who conducted the investigation into the alleged racist and vulgar slurs said by Mr. Traynor.

The City of Worcester has not made a copy of the investigation public. It only released a sort of summary to the victim-motorist.

This whole process is a racist double standard.

Most double standards are indications of some sort of discrimination.

In this case, it indicates the racism still rampant in Worcester City Hall. Please recall the malicious prosecution by Worcester City Manager Ed Augustus of the BlackLives Matter protestors, when the WPD police at the scene said there was no criminal activity. The judge in the case also dismissed all criminal complaints and made the matter a civil case.

The investigative report on Traynor is a public document, given the public records laws of Massachusetts, and should be made public.

Mr. Traynor has admitted his unprofessional actions by confessing to a road rage incident that included vulgarity.

This unprofessional behavior in itself is sufficient for termination.

Although he has denied the racial slurs, there is a perception that he is a racist and should no longer be in what should be a public space free from racism – Worcester City Hall.

TOMORROW, TUESDAY, May 17, 2016, a coalition of activists and concerned people, including Mass. Human Rights Committee and the Progressive Labor Party, will hold a protest rally in front of Worcester City Hall, Main Street, at 6 PM.

At 7 PM the group will take their demands to the Worcester City Council.

Please join us for a Rally tomorrow (April 3) at 6:30 pm at City Hall to Say no to Profiling in Worcester and Yes to Administration Accountability. This Rally was sparked by the call for Justice for Trayvon Martin and the collective injustice we all feel about this case but also, unfortunately, the multiple stories we know of in our own communities that could have or have resulted in similar fates.

In front of Worecster City Hall

A City Council Pre Rally to Demand Accountability from the City Administration and Worcester Police Department when issues are brought up by the Worcester Community and residents.

1. We demand a response from the Administration and the police department as to why there was not any follow up on multiple meeting requests of concerned residents and the former Mayor [Joe O’Brien], who were worried about racial profiling in the Hammond Heights Community.

2. An explanation as to why a 14-year-old boy was arrested outside of his home because a neighbor accused him of looking suspicious.

3. Demand a Response to an item City Councilor Joe O’Brien filed in August 2011, when he was Mayor, requesting the City Manager provide information on the legality of Colleges and Universities patrolling residential communities in the city and the questioning of non-students on residential streets.

Mayor Petty has agreed to take up Councilor Joe O’Brien’s tabled item from last August at this City Council Meeting.

We need to be there to show that we demand a response!

BOSTON – Hundreds of healthcare workers and their supporters will rally at the Massachusetts State House on Wednesday, May 11, at 3 p.m. in an effort to shape upcoming payment reform legislation and to raise awareness of the vital role healthcare service workers play in the delivery of quality care.

As lawmakers prepare for hearings next week on what is being called “phase two” of Massachusetts healthcare reform, members of the state’s largest healthcare union will be mobilizing in massive numbers to lobby legislators on the bill. Those lobbying efforts will be followed by a huge 3 p.m. rally at the Grand Staircase of the State House.

John Mahoney, a small businessman and candidate for state representative in the 13th Worcester District, called on his opponent, personal injury attorney Paul Franco, to reconcile his position on growing businesses in Massachusetts with his decision to send campaign business to Minnesota.

Mr. Franco’s lawn signs, an expenditure of nearly $1,400, have been manufactured by a Minnesota company.

“I am the owner of a small business and I know that every dollar counts,” said Mahoney. “It is inexplicable to send campaign money out of state. I believe in investing in our people. We need to grow businesses right here at home and help them create jobs.  As state representative, that will be my top priority.”

In his platform, Mr. Franco calls on the state to adopt more business-friendly measures so that businesses will expand here – rather than in states with more “business friendly” climates.  END_OF_DOCUMENT_TOKEN_TO_BE_REPLACED