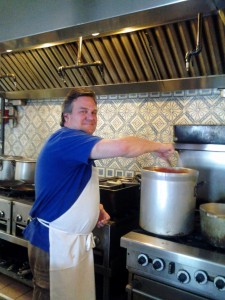 A Mac’s artiste at work!

… is the Worcester I love best, the Worcester that feeds my soul, the Wusta that I could never leave … not in winter, spring time, any time ….

Yesterday I was on the East Side and stepped into Mac’s Diner. The last time I had been there was as a dinner companion of Woo’s perennial mayoral candidate Bill Coleman. Bill and I were full of ourselves that eve and full of Mac’s great Italian food. More bread! I kept shouting cuz Mac’s doesn’t just serve quaint little dinner rolls with their spaghetti or chicken parmesan, they serve LOAVES of hearty, fragrant, yeasty, bread that they bake in their oven, bread that could carry an East Side mechanic through his work day. Some cheese or sausage, maybe a bit of fruit for dessert, and any handyman worth his Craftsman tools or painter worth his heavy canvas drop cloths could work for hours after a Mac meal …

But I digress. Yesterday afternoon I was eating lunch at Mac’s. It was basic, real, salt of the earth. It was tasty, too!

What is it about Mac’s Diner? What makes the gourmet Italian lunches and dinners so fucking incredible? First, the space, a small, rectangular box of a place that may not be a real honest to God diner like the Boulevard Diner down the road, but is as cramped and cozy as a real diner. You get to watch Chris MCMAHON, the cool young guy who is Mac’s owner, get fancy with a skillet. You get to watch him dip his fingers into the little bowl of chopped scallions and sprinkle them into soup or marinara sauce. Like his dad before him, the guy who begat Mac’s years ago, sometime around the Korean War. Chris is a spectacular chef. I don’t think he’s much older than 30. He can sautee his way into any gal’s heart. He runs his kitchen with loving expertise. Chris can even entertain while cooking. He shows me a mag he got in the mail, he greets a customer who’s struggling with crutches, with a smile and knowing wink to the waitress, and says these days his dad is still around enjoying his rust years.

You mean golden, Chris, I say.

What comes after golden, Chris asks me.

Oh, the lively, love hate relationship between and betwixt the family members of small, family-run businesses!

I look at the lunch menu printed in magic marker on the shiny white board above the cooking area. Specials of the day. Turkey chilli, Pasta fagoli. $3.50 for a cup. Chicken and veggies sauteed over pasta. $7.50. Sandwiches $3.50.

I’ll take a cup of the pasta soup, I tell Chris, knowing that a cup of Mac’s soup is equal to a bowl of soup in every other restaurant. And with the hearty Mac’s bread and butter that will accompany the soup, I will have eaten supper. Six hours early.

Yup. In a few minutes Chris has placed a bowl the size of a three decker before me. It is filled to the brim with pasta, beans, carrots, spinach, and other freshly diced veggies swimming in a chicken broth. The bread, my fave part of a Mac meal, ain’t far behind, thanks to the quick-as-mercury Mac’s waitress.

I dive in, and cuz this is Mac’s and it is real and it is Wusta real and I am surrounded by mechanics and DPW guys from the City of Worcester and a retired short order cook and the guy with crutches who is going to town on his chicken parmesan, I lift the big bowl to my hungry mouth and start slurping! Italians, even if they are the McMahons, know how to love their food. The Tirella in me gets this and slurps with abandon!!!! Then I gobble up two slices of Mac bread, with butter. Then I attack the veggies in my soup. I look to my left: All that grated cheese, two cups worth, it seems, the Mac chef is sprinkling on a pasta dish off to the side boggles my brain!

The Mac Diner portions are insanely huge! I mean, customers must roll out the door after lunch, LUNCH. All this fresh, expertly cooked Italian gourmet entree, and I mean “gourmet” cuz it is all so exquisitely prepared, for $7.50. With soup or salad. And an unending supply of artisan bread. Who wants to go back to work after feasting at Mac’s? Can’t we, all of the East Side, take a collective nap in Christopho Columbus Park, right across the street? Only to wake up and play a relaxing game of bocce?

A guy from the neighborhood comes in. He is here to pick up his take out order. Chris gives him the huge plastic bag, but then shouts WAIT. WE FORGOT THE BREAD. He turns away and comes back with a loaf, a loaf! of Mac’s bread lovingly wrapped in clear plastic wrap, like some doughy goddess descending on her cloud of victuals. And all the cherubs sing THANK YOU, MAC’S!

Really. Chris and his family don’t have to be this generous, this caring, this … good.

But they are. To Worcester. All these years.

Which is why when the place burned down in some spots and the damage put Mac’s outa commission, loyal Woo customers raised the money for the extensive repairs and rewiring so that the beloved Mac’s Diner of beloved Shrewsbury Street could reopen. Better than ever. Folks said they pitched in with money and labor because Mac’s was always there for them. Great food at amazingly low prices. A wonderful kitchen crew and waitstaff. A place that felt really Italian in its love for for people, food and what happens when the two groups marry.

After I finished my Mac’s lunch, I went to their bathroom to pee and put on fresh lipstick. As I was on the john, I saw another John. John the apostle. Yup, directly in front of the peeing Rosalie, nailed into the bathroom wall, was a huge picture, painting really, of The Last Supper. Perfect. There was Jesus and all his best buds sitting at a long table, eating the best bread (Jesus!) around.

It could have been the counter at Mac’s Diner. 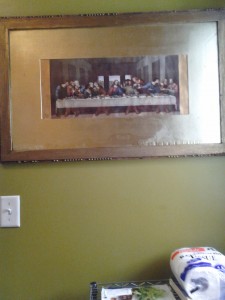 “In the name of the Father, Son and Holy Spirit … ” The view from Mac’s “throne”!

As our children explore and discover their environment, they are exposed to the world of math! Mathematics has become increasingly important in this age of technology. Children need a strong background in math. It’s essential that the school and the home work together to strengthen our children’s ability to understand and apply math in their everyday lives. Many school systems are paying attention to improving early-grades math curriculum instruction, for there is mounting research showing that boosting students’ confidence and effort in math can increase achievement.

For children to compete in the 21’st century global economy, knowledge in math is critical. Today’s high school graduates need to have a solid math background, whether they are headed to college or the workforce. To help ensure our nation’s future competitiveness in the global market, our country created a National Mathematics Advisory Panel in 2006. END_OF_DOCUMENT_TOKEN_TO_BE_REPLACED