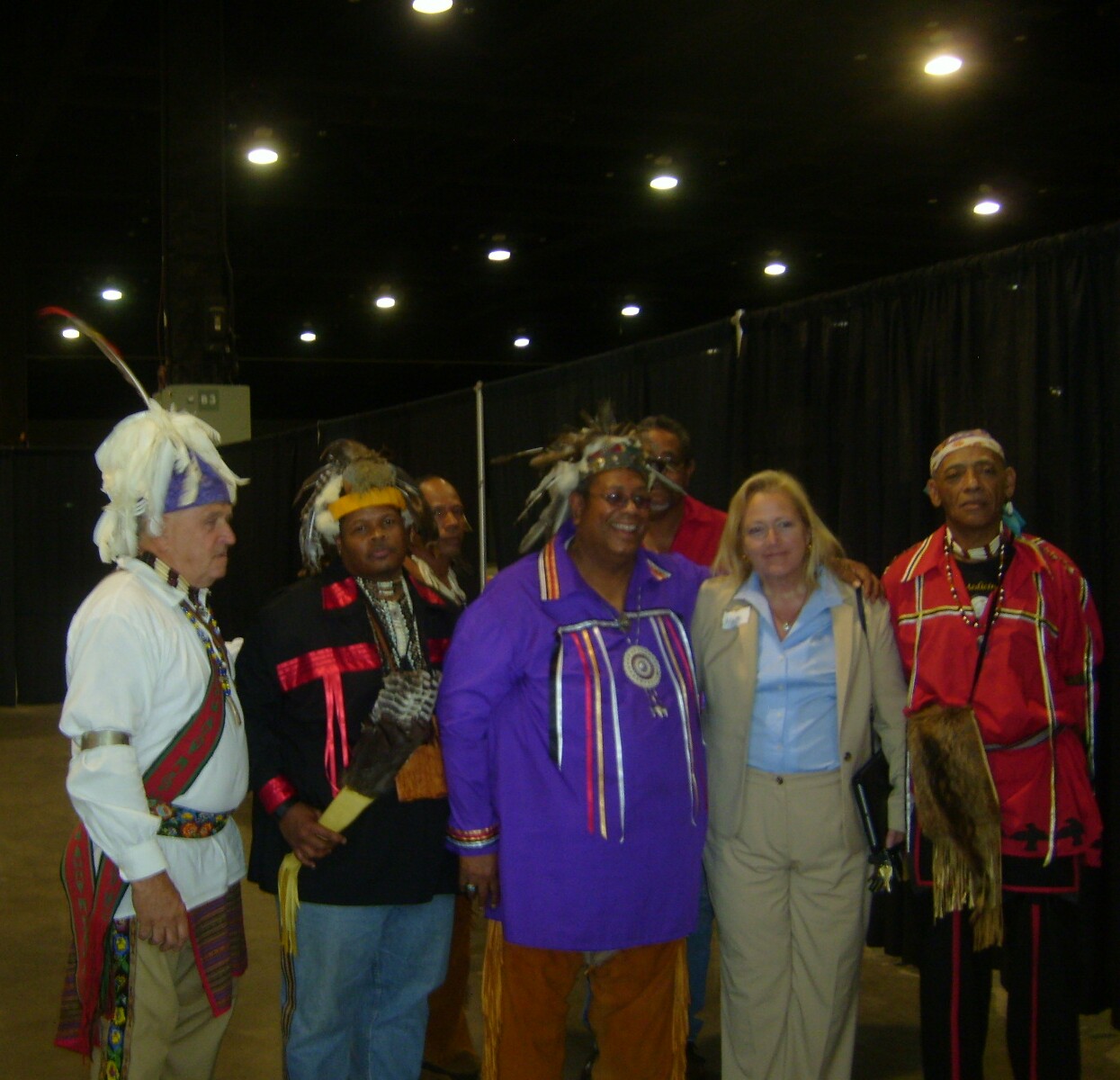 Members of Nipmuc tribe at DOJ

In Central Massachusetts there is an issue of Native Indian identification that has caught me off guard and surprised me. It involves the entity known as a tribe and what it is and who belongs to it.

The Native Indians of Central Massachusetts are the Nipmucs. It is thought that the Nipmucs originally came from the Hudson Valley to populate areas of Central New England. Some say they came to the Worcester area by way of Connecticut and Rhode Island. There is evidence that the name Nipmuc comes from Neepmuck, which derives from Nipamaug, “people of the freshwater fishing place.”

It is written that the English first encountered the Nipmucs in 1630 when Native Indians brought foodstuff to the English in Boston. Although many people brought food over a period of several seasons, only one man has gone into written history, John Acquittamaug. His last name is likely that of his band which lived in what is now Woodstock, Conn.

In Worcester County today the Nipmucs have at least three bands or groups. They are:

Hassanamisco Nipmuc or Grafton Indians are descendants of the Praying town of Hassanamessit which is now located in Grafton, Massachusetts. This is still the current reservation.
This land was never owned by White men.

Natick Massachusetts or Natick Nipmuc are descendants of the Praying town of Natick. The Massachusetts have not retained any of their original lands. The Naticks today are primarily descended from the Massachusetts as well as from Nipmuc ancestry. The Natick qualify for state services as Nipmuc.

The Nipmuc people spoke a language in the Algonquin language group. For the most part, the dialect is no longer spoken, although I understand there is some effort to revive it. All Nipmuc people now speak English as their primary language.

Some people like to group the Nipmucs, Mohegans, Naragansetts, Pequots and Massachusetts together; the consensus seems to be that each was a separate tribe. However, there is some disagreement on this.

Today many the Native Indians of Central Massachusetts live among or attend events of other tribes or communities.

The Enfranchment Act of 1869 effectively ended tribal interaction with Massachusetts government for about 100 years. The members of the tribes became resident of Massachusetts and citizens of the United States. The individuals could interact with the governments.
Previous to the Enfranchisement Act Native Indians were wards of the state. Their affairs were handled indirectly by a sort of receiver. Some of these receivers were dishonest and much of the Native Indians lands were lost to the English.

The Nipmucs are recognized as a tribe by the Commonwealth of Massachusetts. In 1979 the State legislature passed a bill recognizing the Wampanoags, Nipmucs, and Massachusetts (Nipmucs). This recognition brings some benefits which and oversight by the Massachusetts Bureau of Indian Affairs.
To date only the Wampanoags have received Federal recognition. Federal recognition allows a Native Indian tribe (nation) to establish a government with courts, and laws. It is also allowed to collect revenue and set up casinos.

Now the Federal government uses what is called “political” criteria. Some of the political criteria are:

1. Since 1900, it must comprise a distinct community and have existed as a community from historical times;

2. it must have political influence over its members;

3. it must have membership criteria;

4. it must have membership that consists of individuals who descend from a historical Indian tribe and who are not enrolled in any other tribe. The existence of persistent political relationship as an aspect of tribal relations is also emphasized.

Since the time of the King Phillip (Metacom) War the Nipmucs suffered great losses in terms of their cultural and their population. Many of the people were imprisoned, enslaved, executed or died from introduced diseases and poverty.

In order to survive, the Native Indians of Central Massachusetts had to adopt non-blood members into the tribes.
Some of the new adoptees were Black and fewer were White. There were anti-miscegenation laws which made legal marriage between Native Indians and Whites difficult. Until recently many of the light-skinned people did not reveal their heritage, and many of the dark-skinned people pointed out their heritage. Being part Native Indian was a means to mitigate racial oppression against Blacks.

The children of these unions were accepted into the tribe as Native Nipmucs, due to the matrilineal focus of Nipmuc culture. Native Indians vanish from state and federal census records but were listed as ‘Black’, ‘mulatto’, and ‘colored’ or ‘miscellaneous’ -depending on their appearance appeared.

So in the eyes of quite a few people the Nipmucs are mostly Black people. Even among some Native Indians this perception is common.

There is local college professor who never seems to miss an opportunity to say that the Nipmucs are not a known tribe. I get upset every time I hear his words. One of the reason I am writing this article is to say that I think the Nipmucs are tribe. They are a part of our history and an asset. Their tribal traditions should preserved and once again become living.

It does not matter what the Federal government rules. The Nipmucs have a recorded history that goes back at least to 1630. The tribe has people by birth or by adoption. They faced a period of genocide and survived it. Let us all recognize this tribe which is still among us.

There are those among us who want to preserve the Blackstone Valley manufacturing history but have ignored the living people whose ancestors were here before the water wheel. These issues of race, cultural, self-identification and government are sometimes awkward and many times sad to witness. Other times they can be a joy – bringing us self-esteem and knowledge.

WASHINGTON – The number of American hospitals striving to treat lesbian, gay, bisexual, and transgender (LGBT) patients equally and respectfully is on the rise, according to a report released today by the Human Rights Campaign (HRC) Foundation at a press conference with U.S. Health & Human Services Secretary Kathleen Sebelius at Howard University Hospital in Washington, DC. Much work remains to be done to end discrimination in America’s healthcare system, but the once invisible issue of LGBT healthcare equity is gaining national prominence, with healthcare facilities committing themselves to offering unbiased care.

“Just a few short years ago the healthcare industry wasn’t having conversations about LGBT healthcare equality,” said HRC President Chad Griffin. “Now, thanks to advocacy by the LGBT community and some standout leaders, growing numbers of healthcare providers are making an explicit commitment to treat all patients with dignity and respect. The healthcare industry is beginning to heed the call for fairness and compassion.”

The report details the results of the most recent Healthcare Equality Index (HEI), an annual survey administered by the Human Rights Campaign Foundation. This year’s survey found a 40 percent increase in rated facilities, which totaled 407 nationwide. It also found an impressive 162 percent increase in the number of facilities achieving the status of “Leader in LGBT Healthcare Equality,” special recognition given to facilities earning a perfect rating by meeting four core criteria for LGBT patient-centered care laid out in the HEI.

The HEI helps hospitals assess themselves against established best practices and ensure that they are complying with requirements for non-discrimination. These include a requirement issued last year by The Joint Commission, the largest accrediting body for U.S. hospitals, calling on all accredited facilities to extend non-discrimination protection to LGBT patients.

Over 90 percent of HEI 2012 participants explicitly prohibit discrimination against lesbian, gay and bisexual patients, and 76 percent ban discrimination against transgender patients. Additionally, about 75 percent of respondents have a written policy explicitly granting equal visitation rights to same-sex couples and same-sex parents. This represents a significant increase since the Department of Health and Human Services issued rules in 2011 requiring all hospitals that receive federal Medicare and Medicaid funding – nearly every hospital in America – to protect the visitation rights of LGBT people.

For the first time, the HEI additionally required participating facilities to document that high-level managers in key work areas had received expert training in LGBT health needs. As a result, more than 1,000 healthcare administrators across the country participated in training provided through the HEI.

“I commend the LGBT and healthcare communities for the progress made and I am proud to be part of an administration that has a historic record of accomplishment for the LGBT community,” said Sec. Sebelius. “We will continue to take action to ensure that LGBT Americans get equal treatment in healthcare settings and that all patients are treated with the dignity they deserve.”

Studies, including a 2011 Institute of Medicine report, have shown that the LGBT community faces health disparities and healthcare discrimination and that many LGBT Americans are concerned about experiencing bias in healthcare. But things are changing, as the HEI 2012 documents.

“Equal and inclusive healthcare saves lives,” added Griffin. “Increasing numbers of hospitals across the country are working to ensure LGBT patients receive care free of prejudice and discrimination. We thank the HEI 2012 participants for their hard work and dedication to ensuring healthcare equality for all patients.”

* Lists of survey respondents are not identical from year to year.

The Human Rights Campaign is America’s largest civil rights organization working to achieve lesbian, gay, bisexual and transgender equality. By inspiring and engaging all Americans, HRC strives to end discrimination against LGBT citizens and realize a nation that achieves fundamental fairness and equality for all.