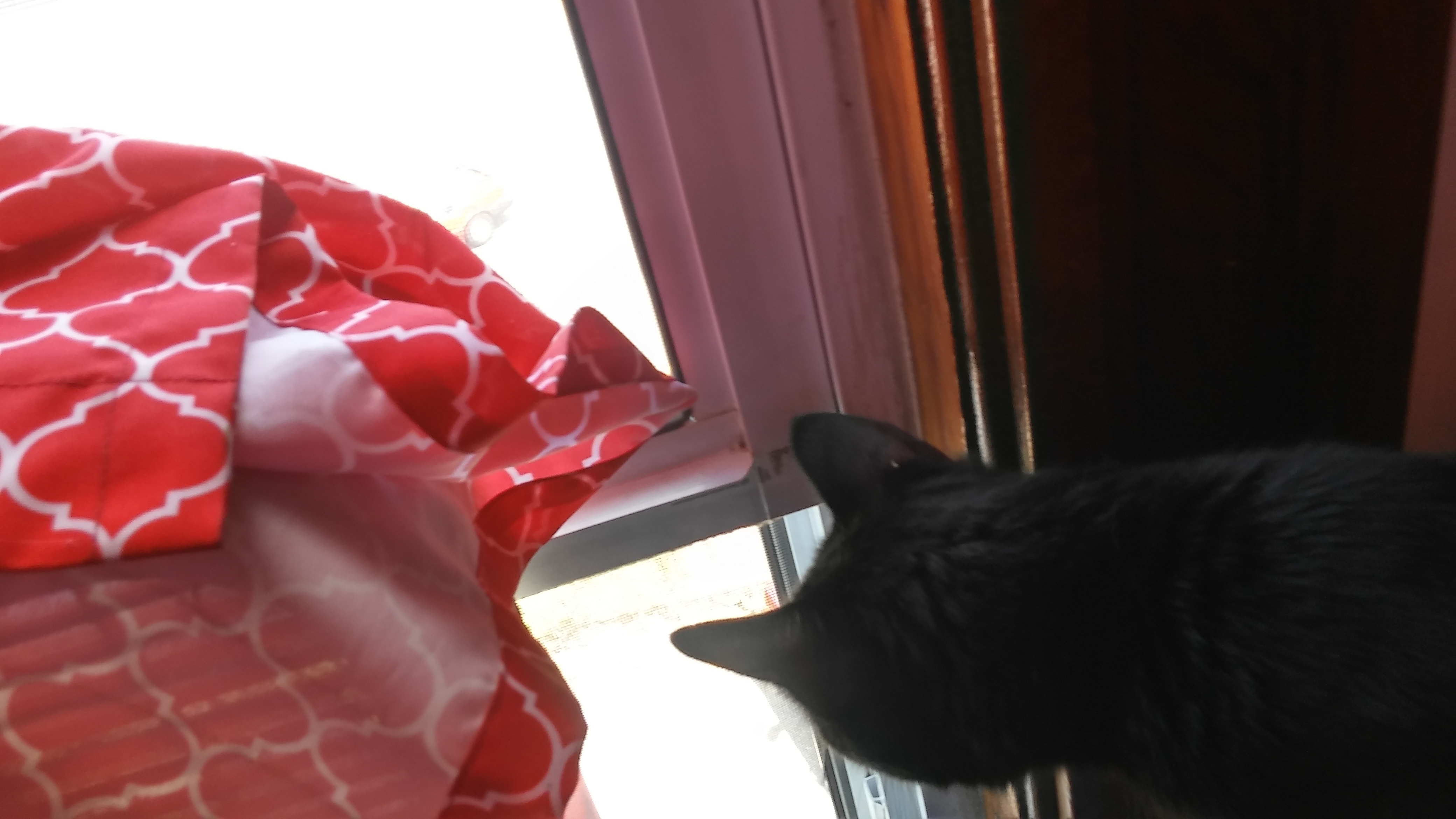 Yesterday Cece spied someone outside my apartment window.      pics: R.T.

It was former ICT scribe Ron O’Clair, in the St. Mary’s church parking lot, in a red convertible, with white interior! Ronny was wearing his big black hippy sombrero and (I think) sporting a beard. He was looking up at me, while I parted the curtains in my fourth-floor shack to admire the sight and snap a pic. Then he gave me a wide smile and a big thumbs up and sped off! Quite the sight! 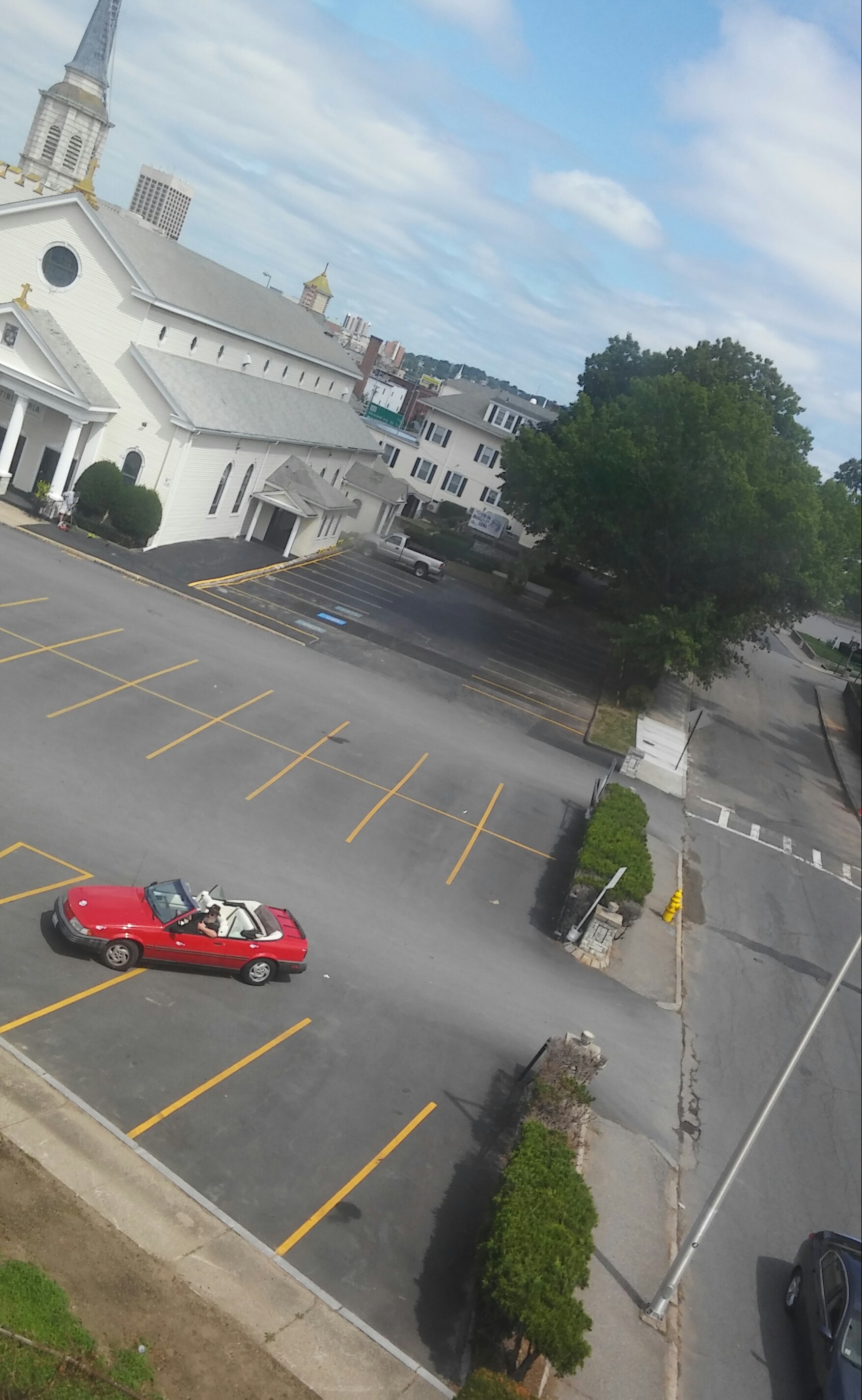 Ahhh, Ronny! On a high! Feeling good with the sun shining on his sombrero and a new shiny red toy! Here’s a guy who’s been knocked down by life from day #1 (childhood poverty, death of a parent when he was a little kid, then foster homes, depression, the murder of his brother, discharge from the military, alcoholism) and come back from the brink so many times (STILL brilliant and articulate, a TERRIFIC writer, in recovery for 30+years, a cool street social worker who’s helped hundreds of people find food, solace, housing, AA meetings as the live-in manager of a Main South rooming house ) that “resilient” is too weak (and serious) a word to describe Ronny. “Come backs” doesn’t fit either because the phrase makes Ronny seem old – which he sorta is, at 55!❤ – and a has-been, like a member of the Herman’s Hermits🎵 – which he is  most definitely not! (Sorry, Peter Noone!)

For me, Ron O’Clair is more Dylan than Noone. More Byron than Seuss. He never goes out of style … But his bipolar illness makes him disappear from the scene now and then, leaving his friends worried and sad. His condition makes him see things so intensely! The perfect writer for ICT! Ron can be deep – deeply sad, deeply wise, deeply sensitive. He can also be deeply wound-up, loud, revved up,  ecstatic. Manic.  Ronny has always offered his friends his kaleidoscope of feelings – and experiences –

… often powerful. When in his emotional “troughs,” though, Ron  pretty much hunkers down in his two rooms in Main South – for weeks. This breaks my heart. You can call it mental illness. But why put a complicated brilliant person like Ronny in a box? Still, his emotional vales break his momentum, whether it be his running for Woo City Council or following through on a marriage proposal that he made to a lovely – I mean lovely both spiritually and physically – hooker that he rescued outside his Main South building. … I think back to that time: Ronny was in love! But his complicated brain waves brought it all to a halt! It made me cry! I was rooting for the pair: Ronny bought “Sandy” a beautiful ring, rented a car one Christmas eve so she wouldn’t have to sit in his crap-cluttered vehicle on the trip to his brother’s house for Christmas dinner – to meet the family.❤ Ronny got Sandy clean and sober, took her to the doctors, the dentist, NA meetings. A gal pal gave Sandy bags of cool  vintage clothing. I planned their wedding with our gal pal: she would provide the vintage wedding dress and I’d dress up my apartment. I’d make the mostly veggie meals, served on my late Mom’s china, turn  my dining and living rooms into an inner-city chapel with all my candles placed on an altar I’d fashioned from headboards I had found on the side of the road. I’d board Jett for the day… Then boom. Ron shut down, so did Sandy  …

… and that was the end of that. Ron dismisses the whole love affair as a non-love affair. A pain in his butt. But I know he’s lying.

Ron has shared many of his experiences with you in ICT. Like the time he was a boy in foster care in rural Maine and bonded with a buffalo on the farm he was living on. The buffalo was like a big pet for Ronny, and he visited him in the field next to his foster parents’ house every day. But one Christmas Ronny unwittingly ate his best friend in the world. The buffalo was the main course for his foster family’s Christmas dinner! Ron tells the story with a chuckle, but you hear the real pain in the story he wrote for InCity Times. ICT – the conduit for Ronny’s dreams and schemes – realized and/or crumpled. If you meet Ron in Main South or at any of his haunts in Worcester – at a Worcester diner eating a killer breakfast, at a junk-yard buying parts cheap for his cars that he collects like jewels – you would think he’s kinda glib and … a jerk. Incapable of the stories he writes. But if you read his columns – which I have with so much joy, through years  – you’d soon realize Ron’s the brightest guy in the room. But his poverty, his living on the edge in the rooming house in Main South, his sometimes too enthusiastic emotional style, his physical SIZE! have left him the perennial outsider, here in Worcester, the hometown he adores. You all discount him and his intelligence and goals. It’s  a kind of prejudice. Not racial. But economic. And maybe just maybe your version of mental well-being skews a little to the left or right of Ronny’s state of mind! Shame on you!

In this life: so many people crossing each other’s paths, so many good people shunted to another road or handcuffed into silence by the in-crowd, the money crowd, the politically connected crowd. The hit brigade wallowing in their version of Wasp happiness.

What about WOP happiness? 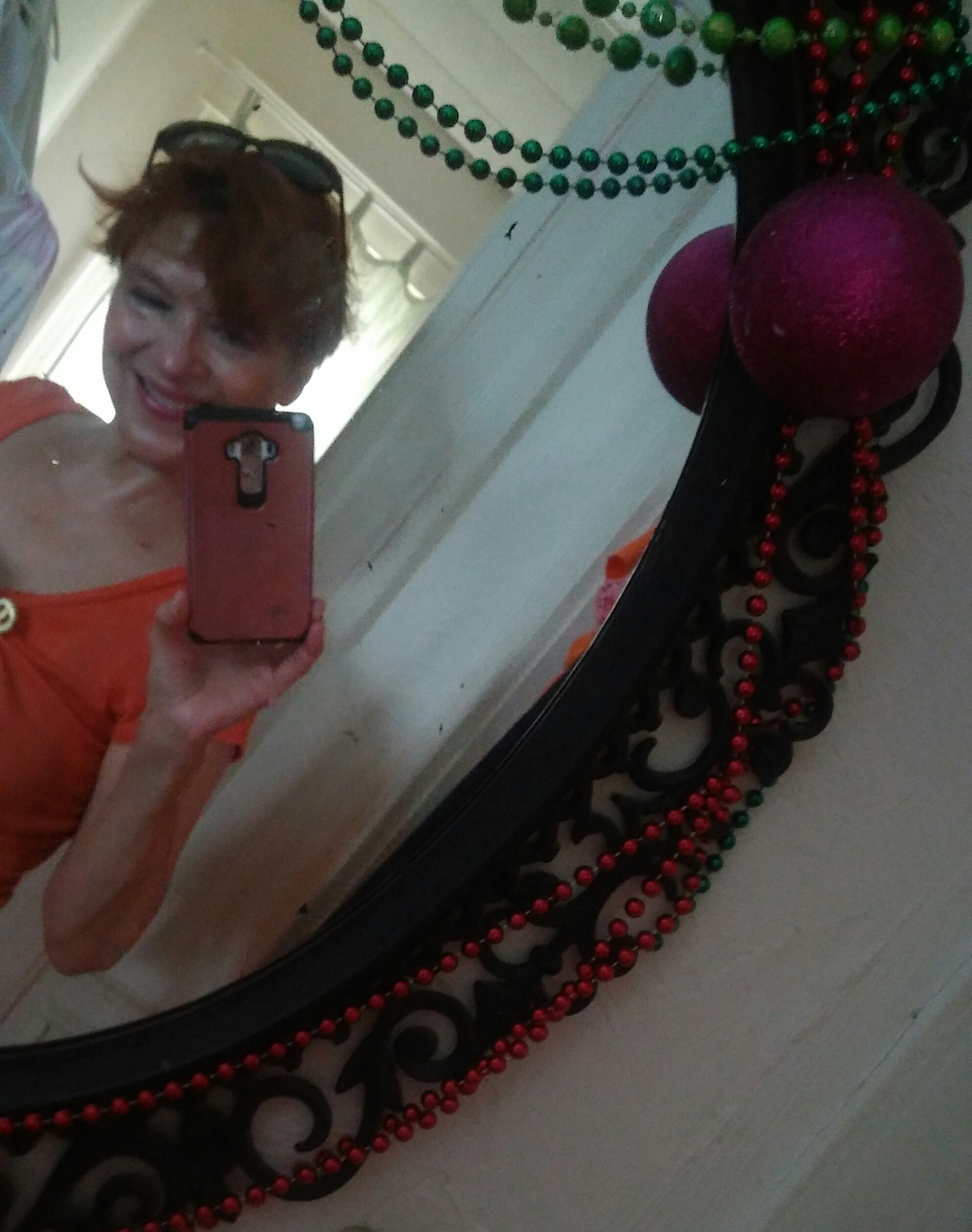 Wikipedia says: “WOP stands for WithOut Papers. Many Italian immigrants had no papers to identify themselves and were branded as WOPs.”

My grandfather Sabino was a WOP.

He was also a NANG: Not A Nice Guy! 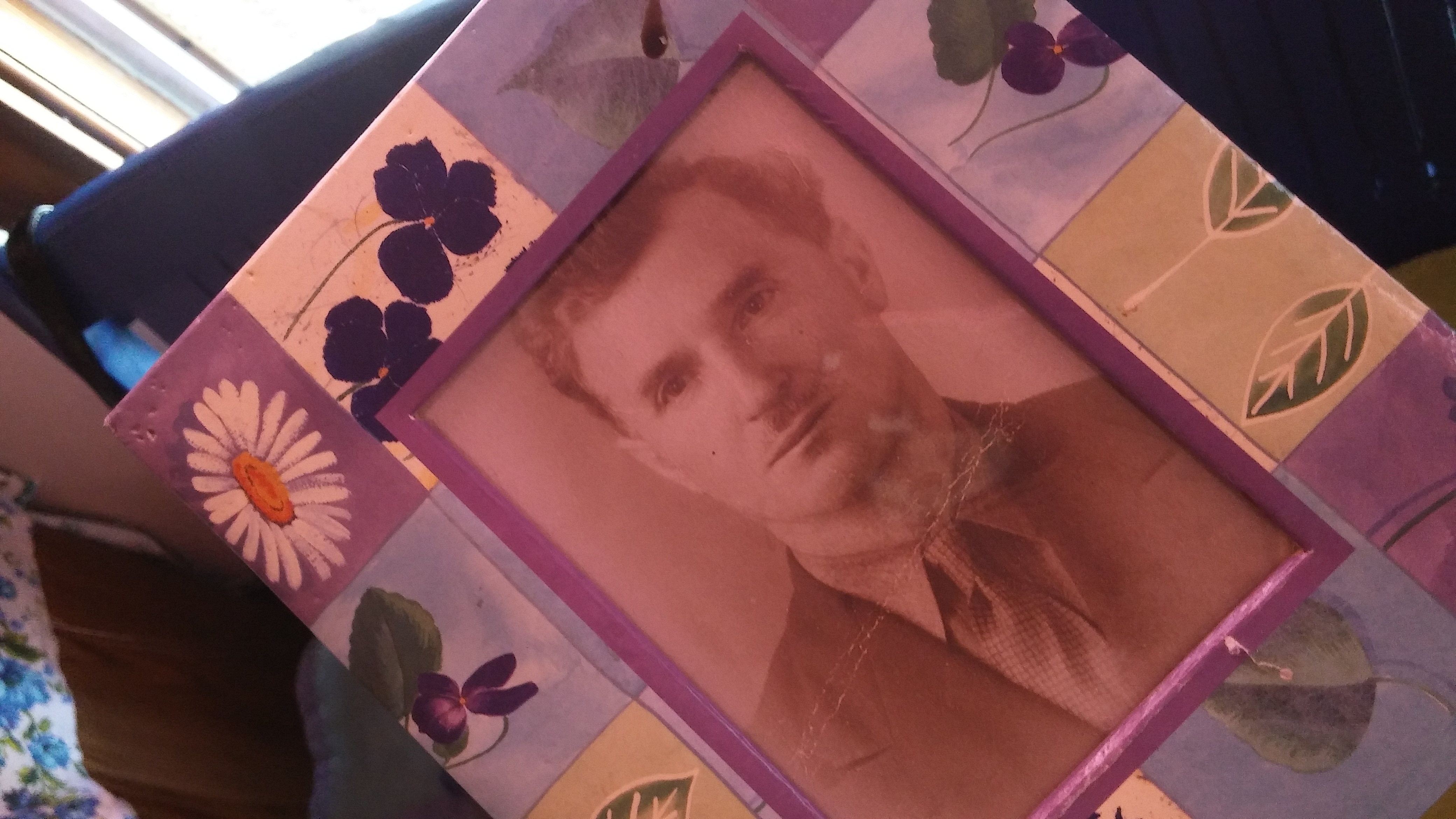 I’ve told you all about him: Unlike Ron, Sabino took his outsiderness, his otherness and used it to become a pretty successful entrepreneur. But he was an asshole in every other aspect of his life: cheated on his wife who gave him 10 children, beat her, beat my father, was a bootlegger. I mean, the guy was BAD!

Ron – and this WOP! – aren’t bad: we WRITE, we try to do the right thing for our city and this makes us happy and proud! Forget about moi for a second, let’s focus on Ron. Over the years Ron has:

given me a million rides when the jalopy I am driving breaks down.

delivered gallons of gas to me when I’ve run out – usually at night in the inner city. How comforting it was to see my friend pouring the gas into my gas tank, wearing his fake-lamb-skinned-lined bedroom slippers. In the middle of a Woo winter night. He wasn’t smiling, made no small talk and walked away with a huge huff after he finished his AAA call, but he ALWAYS came, always came through for me.

driven tons of people from his rooming house to the food pantry to get food so they could eat.

driven tons of people from his rooming house to AA, Al Anon, NA meetings – often joining the group as he is in recovery and never gets complacent about the fact!

helped strangers when they needed help

befriended lots of Woo characters – including this one! I remember the night Ronny came to my house with an old ex-boxer from Boston who just got a room at Ronny’s place. I had called Ron frantic – my late Mom’s cat April had just become diabetic and I did not know how/was afraid to use the needles to inject the insulin into April. Well, Ronny brings the boxer over to my house to help – the guy is BALD, HUGE, covered with tattoos, standing at my door, with Ronny. It is close to midnight. I am distraught. April needs her medicine. I don’t want her to die. I say…OK, come in. The boxer comes in, fills up half the entry-way but … picks April up, talks oh so softly to her, takes one of the skinny needles out of her needle box (filled with about 1O0 needles), shows me how to poke the needle into the little insulin bottle (always shake it beforehand), measure the amount of insulin. Then he lifts a bit of April’s fur on her shoulder, making a little tent, and gently gives her her shot. Then the boxer gently massages the spot where he inserted the needle. He told me and Ronny his grandmother had been a diabetic and, as a little boy, he used to give her her insulin shots. Every day. He said it all so beautifully. I could tell he had really loved his grandmother. Maybe she had raised him… I felt like shit for having been afraid of the Boston boxer and hesitating to let him into my home. As he turned to leave, I hugged the boxer – and Ronny -and said THANK YOU, GUYS! They lumbered down the stairs that lead up to my 4th floor apartment. Noisy as hell. I loved them both!

A night I will never forget, courtesy of Ronald O’Clair. 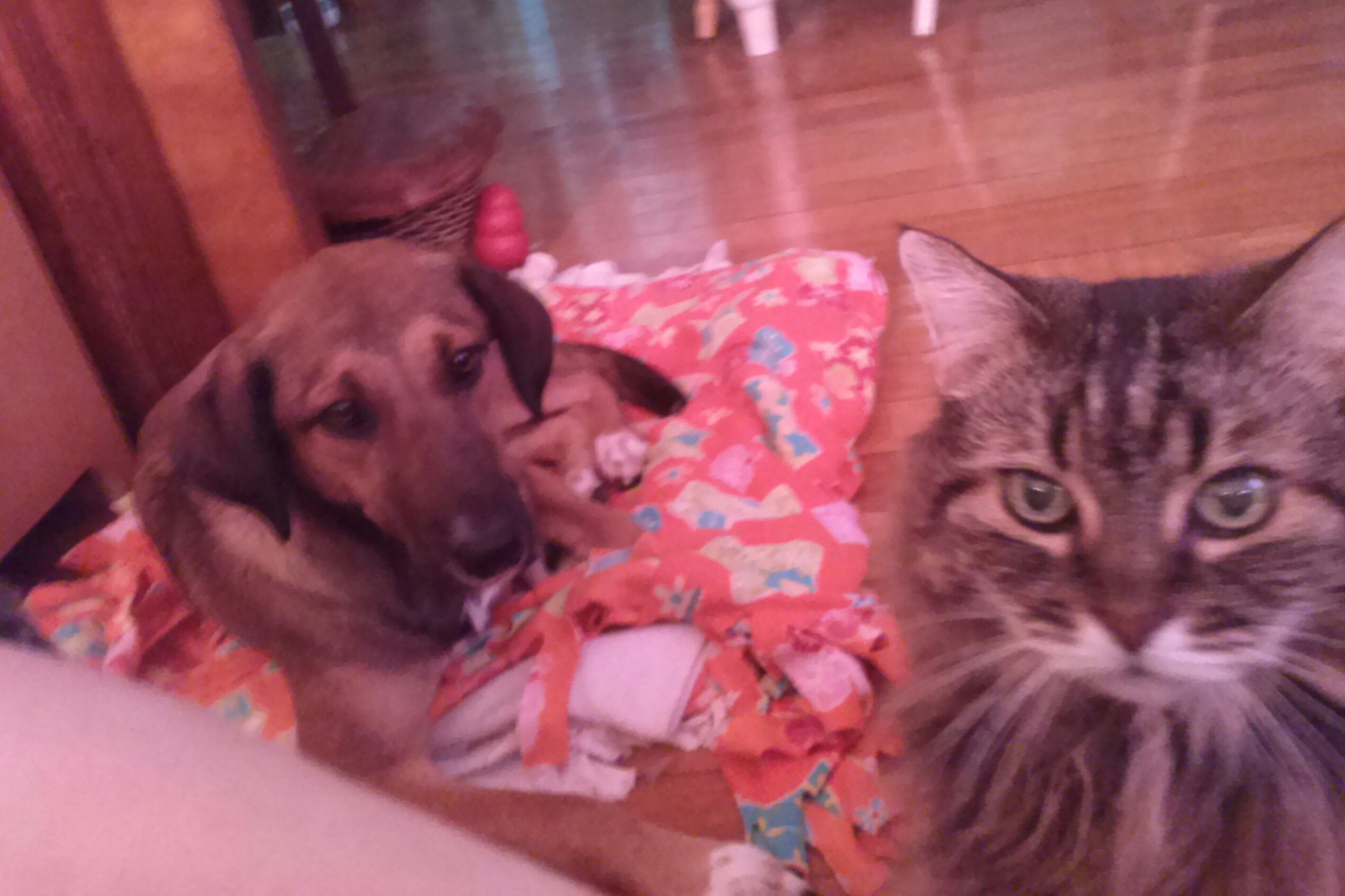 Lilac and the late, beautiful April

supported his landlord who was overwhelmed with his rooming house.

worked with the Worcester police for years to make his neck of the woods – the corner of Main and Charlton streets – much safer and quieter and a little less heroin-infected, especially when the PIP wet shelter was still open (across Charlton Street!)

So naturally it enraged me to see my friend’s hopes dashed when he applied for a slot on a City of Worcester Board/Commission and  was turned down by a City Manager toady. Not the commission who does the vetting but by one of former CM Mike O’Brien’s (an ICT detractor for sure) employees. This was about five years ago, when Ronny was on a huge UP and had all his i’s dotted and t’s crossed. He had applied to sit on a City of Worcester health or zba board – for no pay, as the job is a volunteer position. I had encouraged him to apply. Ronny, living the life he’s lived, KNOWS EVERYTHING ABOUT INNER-CITY HEALTH ISSUES. And what he doesn’t know – he’ll read up on. He’s a brilliant guy! Also, so compassionate! Hell, he’d be down in the trenches with Dr. Mattie at a homeless camp, talking to the folks, driving them to job interviews! I mean, he would be all in – give 100%. But CM O’Brien hated ICT, so Ron got screwed.

A few days ago I called Ronny. We were talking about city boards and commissions when I urged him to take another crack at the HEALTH commission. “The city needs lots of people from District 4! On lots of city boards!” I said.

Ronny was hesitant. I said: GO FOR IT, RONNY! YOU WILL BE GREAT – on that city board or any city board!

He laughed. Then I asked him to cover an inner-city health clinic’s health fair for me, to run in the next issue of CECELIA. Ronny said YES, attended the event for me and sent me some pics he took a few hours later. Here is one for you! 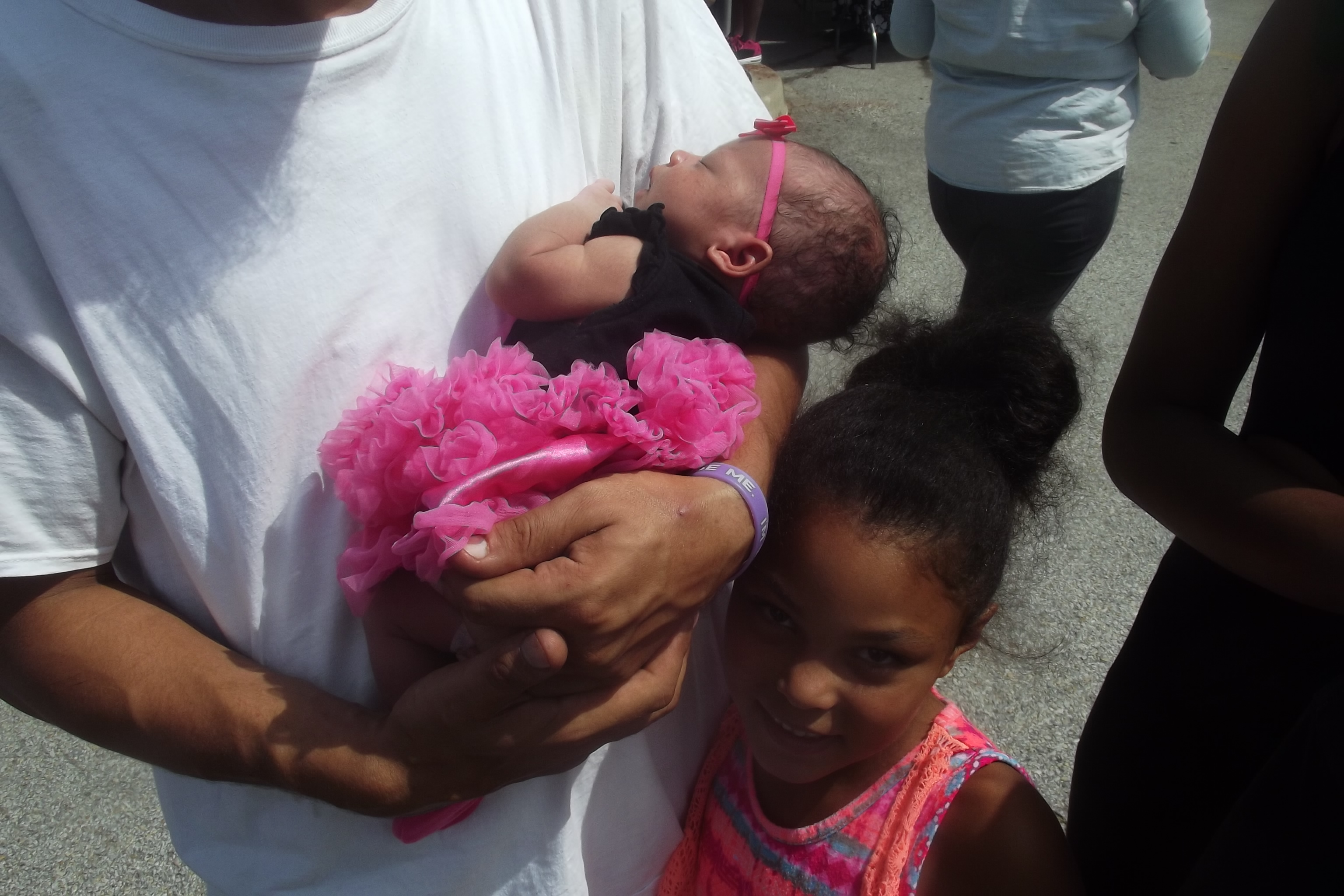