Enjoying the stupendous Los Lobos this morning. A classic lp I’ve been listening to since my college days!  – R. T. 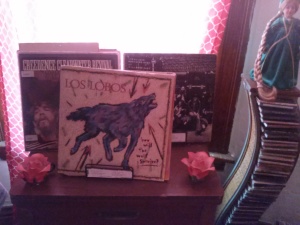 **************
Then out the door to work on ICT! The train tracks Jett and I clunked over a few hours ago reminded me of this tune. Nothing better than driving around Worcester in my jalopy with my Jett, working on my paper, blasting my Dwight!

Hundley, who witnessed elephant beatings during her time with Ringling, urges people to stay away from the circus.

“I saw handlers deliver a beating … for 30 minutes. She was covered with bloody wounds. I’ll never forget her agonizing screams,” says Hundley. “Please, never take your children to a Ringling Bros. circus.”

During that time, she witnessed incidents of abuse, including the following:

In 2006 an elephant in Tulsa, Oklahoma, was beaten with bullhooks so severely that she bled profusely and cried out in pain. A trainer viciously whipped a camel and punched a miniature horse in the face.

Trainers jabbed horses with pitchforks and gave them extremely painful “lip twists” to force the animals to obey commands.

An elephant with painful arthritis was kept on the road.

“The abuse was not just once in a while—it occurred every day,” says Hundley.

She continues: “The elephants, horses, and camels were hit, punched, beaten, and whipped by everyone from the head of animal care down to inexperienced animal handlers hired out of homeless shelters.”

Archele says that she repeatedly complained to circus management about the abuse but to no avail, prompting her to quit in disgust.

Archele teamed up with PETA because she wanted others to learn about the cruelty involved when animals are forced to perform in circuses.

You can help spread the message by boycotting the circus and telling everyone you know about circus cruelty.

Love all these country guys and gals’ amazing voices! – R.T.

PLEASE! Let Worcester’s city manager and city councilors know that you are AGAINST Ringling coming to Worcester! That wild animals do not belong on train box cars, are not supposed to be wearing head-dresses or saddles, should not – it’s morally reprehensible! – be forced to be anything but themselves. Wild animals!

Wild (exotic) animals, such as chimps, can NEVER be domesticated. Cute little chimps mature into adult chimpanzees  that can (and have) done real damage to the addle-brained humans who, stupidly, think they are our “pals.”  Wild animals are not domesticated dogs or cats or goats or cows or chickens! THEY have not been domesticated – genetically speaking! You can not BEAT, TRAIN a wild animal’s genetic NATURE out of it! Humans never have! We never will! For ex: Cute, captive polar bear cubs will attack and do serious damage to the very same people who have bottle nursed them and snuggled them and smooched them up when they are just a few months older! Why can’t we “get” this? Cuz the animals are so GORGEOUS and AWE-INSPIRING and we are so selfish.

If there’s one thing Ringling Bros. circus has proved over the years, it’s that it’s the cruelest show on Earth. Here are 12 things that Ringling Bros. doesn’t want you to know:

1. The circus tears babies away from their mothers.

Baby elephants are forced to stand on a concrete floor for about 23 hours a day for up to six months, unable to lie down or even turn around.

4. Training goes unmonitored by any agency of any kind.

The elephants cry out, but there is no one there to help them.

5. Elephants spend most of their lives in chains.

When they aren’t performing, elephants are confined.

6. Elephants travel in boxcars like these for up to 100 hours straight.

The doors are barely bigger than they are.

7. Elephants are beaten for the slightest disobedience.

8. The wounds on this elephant are plainly visible.

Trainers usually cover them up with “Wonder Dust” so that inspectors can’t see them.

12. Even kids know about Ringling’s abuse.

The sheen around “the cruelest show on Earth” is nearly gone, as more and more people speak out against Ringling’s barbaric practices every day!

They said Bogart and Bergman had amazing chemistry in CASABLANCA. I think Bergman really sizzled with Cary Grant in NOTORIOUS. Here is the entire movie for you! Check it out! Both movies make great holiday gifts and are a blast to watch on cold cold winter nights! – R. Tirella