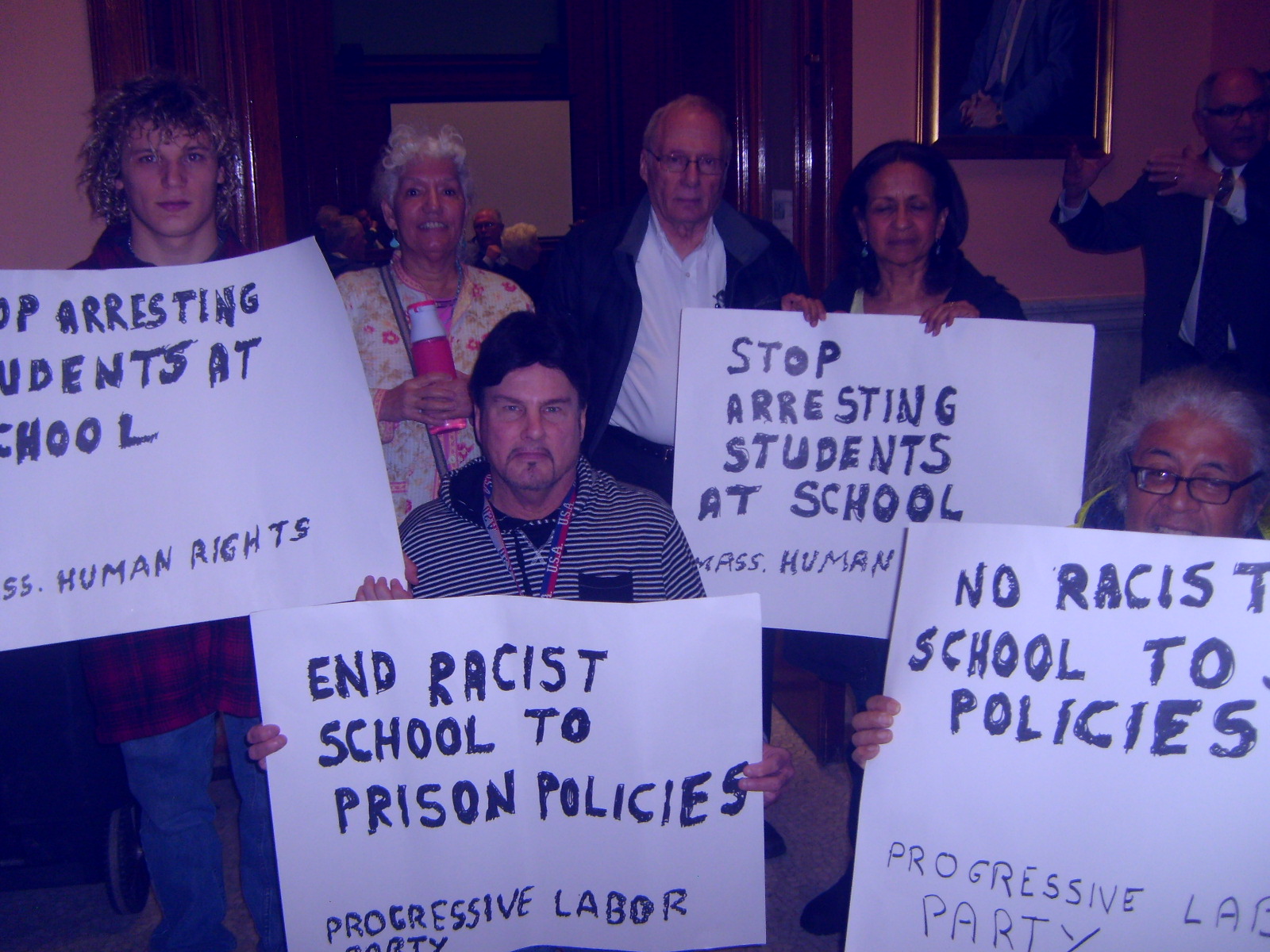 There is hope to be found in the little group of people who are demanding that Worcester students be treated in a manner that will lead to their success – not to the criminal justice system.

The Safety Audit for the Worcester Public Schools was discussed at the December 17, 2015, Worcester School Committee Meeting.

The WPS Safety Audit concerns itself mostly with keeping the students and staff at our schools safe from outside threats. It talks about stronger doors, more security at front entrances, comprehensive responses, etc.

The Safety Audit rightly did not concern itself with internal “incidents” such as students yelling, bouncing basketballs, cell phone use, or dress code which are things that students, who are still developing,  act out on.

The WPS Safety Audit did say that if the police were brought in to resolve these “incidents” many staffers and students would not cooperate with the police. This non-cooperation caused by the criminalization of non-criminal incidents could have an adverse effect on safety. The Audit recommended that for these “incidents” there should be a policy of no arrests and deferral to school disciplinary policy and not the criminal justice system.

It did not seem that many on the Worcester School Committee paid attention to this recommendation.

Many people spoke out against police in the schools and the arrests of students at school. Some in the opposition identified themselves as from the Progressive Labor Party (PLP), Mass. Human Rights, the ACLU and a Unitarian Church.

Ron Madnick, a former teacher at Burncoat High School, said having loaded guns, carried by the police, was troubling in terms of accidents.

The student representative from South High School said he agreed students should not be arrested at school unless there was an emergency.

Idella Hazard, a former police officer, said police in our schools was racist and part of the school to prison pipeline. Gwen Davis (my wife) said most of the police officers make six-figure salaries and that taxpayer money would be better spent on more teachers in the Worcester Public Schools and better student-to-teacher ratios.

There was one person who spoke in favor of the police arresting students at school. He is the head of the teachers’ union. He said only bad kids get arrested. He then said armed gunmen could have stopped the tragedy in Newtown, where 21 elementary school children and six staffers were massacred. The Minister from the Unitarian Church replied that it was outrageous to bring up Newtown, as there are no plans to station police in Worcester’s elementary schools.

He said the MOU would be posted on the Worcester Public Schools website December 18, 2015. It was not.

Dr. Rodrigues had said earlier in the month that the new MOU would not be written until after March 2016.

He is learning quickly how to play the Worcester old boy network political game.

It is encouraging that some thought is going into making our schools safer from outside threats.

It is sad that many people think about school safety in terms of threats from students.

Many in our schools and city seem to be afraid of young Black students and anyone adversely affected by poverty – especially teenagers.

There is hope to be found in the little group of people who are demanding that Worcester students be treated in a manner that will lead to their success – not to the criminal justice system.

At least 19 students have been arrested in the Worcester Public Schools between September 2015 and November 23, 2015. Of that number, at least two children were arrested at the middle school level.

The two arrests at the middle school level are especially concerning, due to the young age of the children. I find it hard to believe the children had to be arrested at school. With all of the doctors of education in the Worcester Public Schools, there must be an alternative to arresting young children in the middle or elementary schools. There should be a City of Worcester policy against arrest children at middle or elementary schools.

Because of the political hysteria, based to some extent on racism, some people on the Worcester City Council and the Worcester School Committee of Worcester ordered police into our school without a Memorandum of Understanding and appropriate knowledge of the police officers’ duties or restrictions.

This action was not well thought out and now the City of Worcester is out of compliance with the statutes. Being out of compliance might mean that all of the Worcester Public Schools students arrested might have been unlawfully arrested at school with right of causal action.

M.G.L. Chapter 71 Section 37 P requires that a School System have in place a Memorandum of Understanding (MOU) with the Police Department:

Worcester Police Chief Gary Gemme has stated to the local press that he feels that the vast majority of people/parents supports police in our schools.  Unfortunately for us, Chief Gemme is spinning as he offers no evidence. The Massachusetts Human Rights group is collecting signatures of a petition on the issue with more than 100 signatures at last count.

Chief Gemme has made another presumption in that he says the cops in the schools are doing good. Without a MOU it is not clear what the they are doing. There is no evidence that the police are improving safety and education.

There are several reports, including an ACLU report, that shows police in the schools are a source of students leaving school and then going into the “school to prison pipeline.” Many of these students are from poor and minority neighborhoods.

On the issue of the MOU Chief Gemme asserts that he does not want the police to become school disciplinarians. The facts show that the police officers are already the school disciplinarians. According to Public Safety Liaison Officer for the Worcester Public Schools, Robert Pezella, most of the arrests of students was for disruption and disorderly.

Disruption is not a crime anywhere and should have been handled administratively per Chapter 222. Disorderly is vaguely defined and subjective. The actions of the students should likely have also been adjudicated under Chapter 222.

The cat was let out of the bag when Mr. Pezzella stated to the local press that the MOU would likely not be approved until after a safety audit was completed.

The question Mr. Pezella has unintentionally pointed to is why cops were put into the schools BEFORE the Safety Audit was completed!!!

I believe Mr. Pezella is a good man who has been asked by the City to clean up a mess created by Worcester School Committee woman Dianna Briancharia and Worcester City Councilor Michael Gaffney. Mr. Pezella several years ago helped my wife with an issue at UMass Hospital – he was excellent.

This fiasco of putting police into our public schools possibly is being covered up. Mr. Pezzella has not mentioned how parents, students, teachers, principals and advocates will have input into the so called Safety Audit or the MOU.

This statement from Mr. Pezzella is troubling:

“There’s a fine line between disciplinary and public safety and, in some cases, student unrest could lead to a possible arrest of a student.”

Like his misstatement about disruptions, student unrest is not a crime either.

For teenagers it is normalcy.

”School resource officer”, a duly sworn municipal police officer with all necessary training, up-to-date certificates or a special officer appointed by the chief of police charged with providing law enforcement and security services to elementary and secondary public schools.

The losers in all of this are the children in the Worcester Public Schools who are compelled to go into a learning environment in which they can be arrested on the most frivolous or subjective of reasons without recourse to their rights found in Chapter 222. The environment is filled with police officers who do not know for certain what they can or cannot do because there is no MOU. An environment created by the racist rants of some Worcester city officials.