Earlier we told you about former Worcester City Councilor Mike Germain’s animal rights-eousness! He urged fellow Worcesterites last week to skip, as he does, the traveling zoo that came to our city.

But did you know Mike Germain feeds the poor and the homeless? That’s right!  Three times a week Mike, along with his friends at Ralph’s Tavern on Shrewsbury Street, cook up huge amounts of food and deliver trays of it to the Saint John’s Church soup kitchen on nearby Temple Street.  There, Father Madden and kitchen workers serve it at lunch time to the scores of hungry people who come to the church for a hot, nutritious meal (sometimes their only one for the day) and some groceries (the church’s relatively new food building also houses a huge food pantry as well as a cafeteria). 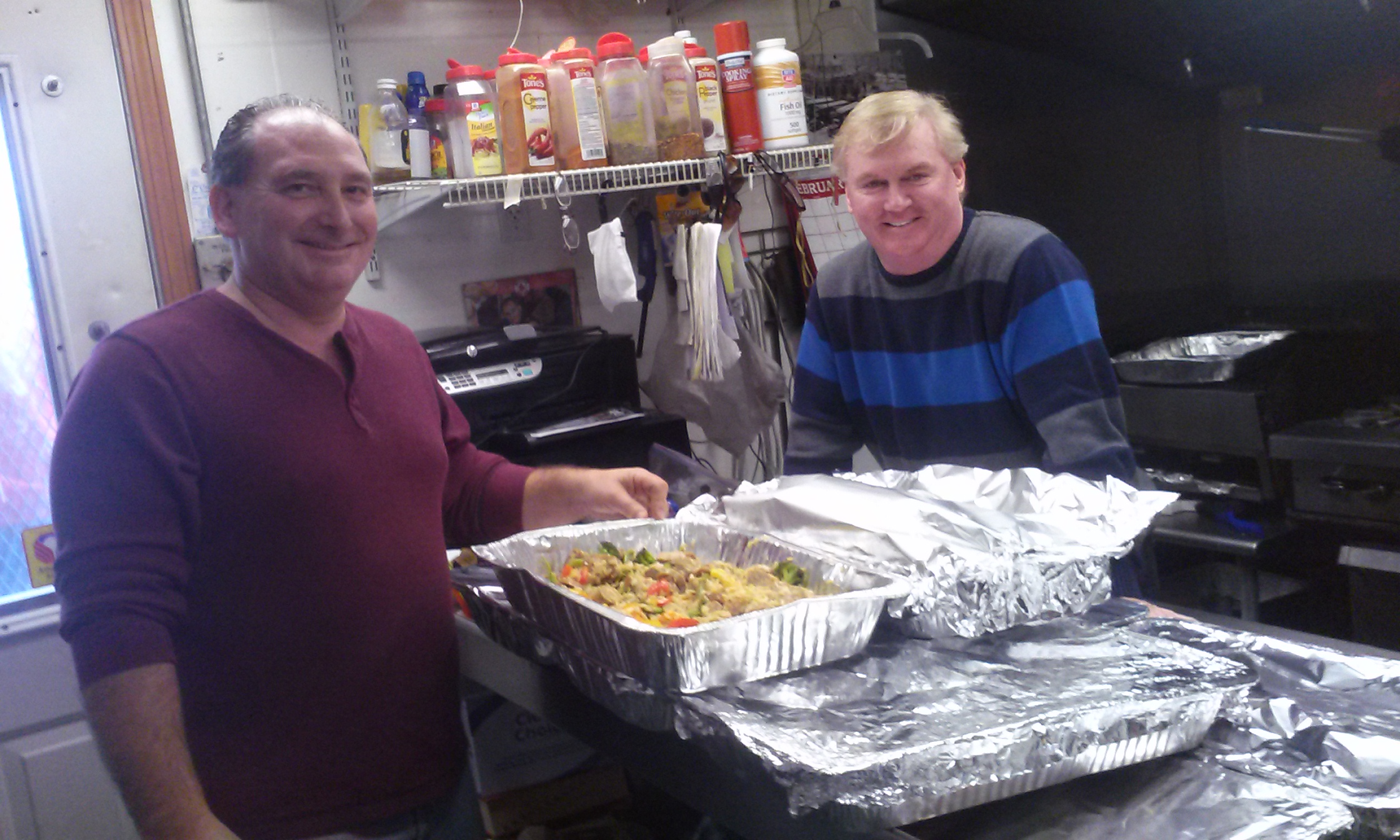 Here’s Mike (right) and Scot Bove just after they and fellow volunteers cooked the mega lunch (all on their dime) and right before heading out to deliver the food to Saint John’s. Mike does this THREE TIMES A WEEK. Has been doing this! Quietly. Purposefully. Just the way Jesus would have liked it. He doesn’t crow about his community service, doesn’t invite the TV cameras or newspaper columnists to give him free publicity. His pal had to take me to the side and say: LOOK! YOU GOTTA SEE WHAT MIKE’S BEEN UP TO! A real cutie, Mike just blushed as I snapped photos. AND HE DIDN’T TOOT HIS HORN. Refreshing!

On the flip side: The Worcester City Council lost a really GOOD person when it lost Mike Germain. Mike, with his shy, easy going ways, worked with and helped a lot of people while he was on the council . He was great at one on one constituent service! He always made the calls or visits on your behalf! Always tried to connect folks with each other. But City Councilor Germain had a no-fuss, no-muss style – never a smart move for a politician. POLITICIANS NEED TO MAKE NOISE.  Mike’s kinda quiet. As a Woo City Councilor, he never pontificated on the Council floor on Tuesday nights or demagogued an issue in any way. He never hogged credit, or threw a hissy fit, or played mad and shook his fist at the video cameras. Nope. Mike Germain was a cute, easy going guy, and voters thought his affable style meant he didn’t care. Or that he was dumb. The way society underestimates cute/pretty women. But as a Worcester city councilor, Mike, who graduated from Holy Cross college and is well spoken and is a very sharp writer, did his job.

Did I mention he’s adopted two homeless dogs, a homeless cat, a homeless parrot and some fishies that needed a place to swim around in?

It seems like Worcester voters always go for the stupid, loud mouths (Jordon Levy) or the perennial cheapskates peddling their nut-job conspiracy theories (Worcester City Councilors Konnie Lukes and Michael Gaffney) – politicians  who never look at things in new, creative ways. But they know how to grab your attention. … And that’s all that matters in this town.