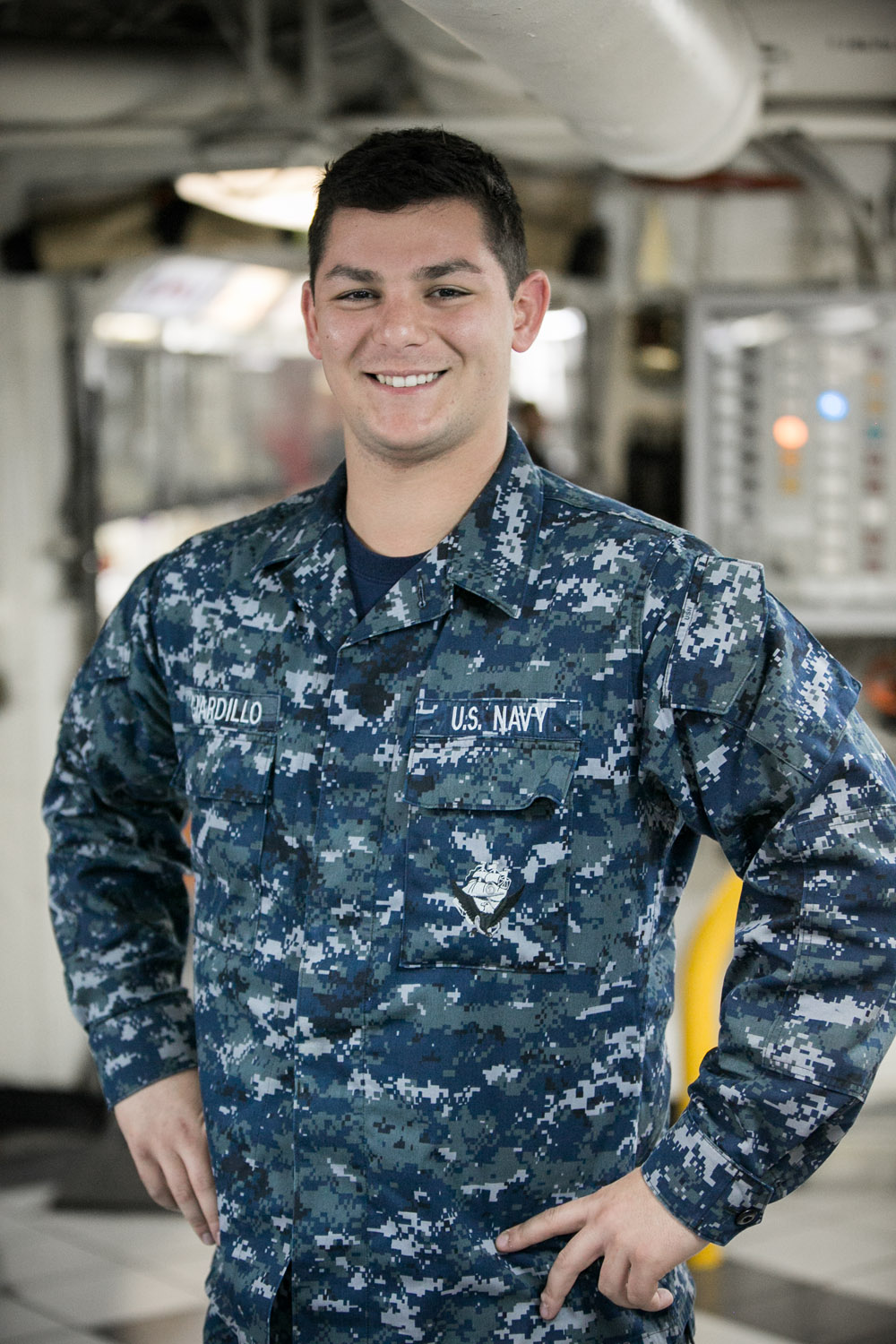 Seaman Giardillo is an undesignated seaman aboard the San Diego-based ship, a Nimitz-class nuclear-powered aircraft carrier and one of only ten operational aircraft carriers in the Navy today.

“My job is the general preservation of the ship through painting and maintenance,” said Giardillo

Named in honor of former President Ronald Reagan, the carrier is longer than 3 football fields, at nearly 1,100 feet long. The ship is 252 feet wide and weighs more than 100,000 tons. Two nuclear reactors can push the ship through the water at nearly 35 mph.

As a sailor with numerous responsibilities, Giardillo said he is proud to serve his country aboard an aircraft carrier.

“The people here are great. I like how everyone gets along like a family and you know that they have your back,” said Giardillo.

Giardillo also said he is very proud of the work he is doing as part of USS Ronald Reagan’s nearly 3,000-member crew, helping protect America on the world’s oceans.

Sailors’ jobs are highly varied aboard USS Ronald Reagan. Nearly 3,000 men and women make up the ship’s company, which keeps all parts of the aircraft carrier running smoothly — this includes everything from washing dishes and preparing meals to handling weaponry and maintaining the nuclear reactors. Another 2,000 or so form the air wing, the people who actually fly and maintain the aircraft.

“I never cease to be impressed with the type and quality of work that goes on aboard the carrier each day,” said Capt. Christopher E. Bolt, the carrier’s commanding officer. “Our team is filled with highly qualified young adults – in many cases, 19 and 20 years old – and they’re out here launching and recovering aircraft, running a complex propulsion system safely, serving as air traffic controllers, operating sophisticated electronics, and keeping this floating city alive and functioning. Their work ethic, enthusiasm, and esprit de corps are second to none. If you pick up a newspaper in any city and examine what other 19- and 20-year-olds are doing, there is no comparison to the level of responsibility our Sailors hold. That caliber of Sailor is what has earned us the title of America’s Flagship.”

USS Ronald Reagan is also a self-sustaining, mobile airport and, like each of the Navy’s aircraft carriers, is designed for a 50-year service life. While underway, the ship carries more than 70 jets, helicopters and other aircraft, all of which take off from and land on the carrier’s 4.5-acre flight deck. Four powerful catapults launch aircraft off the bow of the ship. After lowering a tail hook that protrudes from the rear of the aircraft, jets and aircraft land by snagging a steel cable called an arresting wire.

After an extended maintenance period spent pier side in San Diego, USS Ronald Reagan is preparing for its move to Japan, as part of the first ever three-hull aircraft carrier crew and hull swap. It will replace USS George Washington in Japan and become part of the U.S. 7th Fleet forward-deployed naval forces (FDNF) in Yokosuka, Japan. As part of this rebalance strategy to increase the Navy’s presence in the Pacific Fleet, USS Theodore Roosevelt will move from Norfolk, Va., to San Diego.

In 2008, George Washington was the first nuclear-powered aircraft carrier sent to Japan as part of the FDNF. Maintaining a FDNF capability supports the United States’ commitment to the defense of Japan and the security and stability of the vital Indo-Asia-Pacific region.

As a member of one of the U.S. Navy’s most relied upon assets, Giardillo and other USS Ronald Reagan sailors know they are part of an agile and skilled team standing ready to defend America.

The Navy is uniquely positioned to be there, on the world’s oceans, patrolling what is essentially the world’s interstate ocean highway system. The U.S. Navy ensures the free flow of global trade which, in turn, preserves America’s economic prosperity. When it comes to protecting and defending America, being there matters. And America’s Navy is already there.

“I enjoy the fact the Navy has given me the opportunity to experience different things like traveling,” said Giardillo.