Inside WARL! All proceeds go to help their precious babies!

Here is a bunny up for adoption: 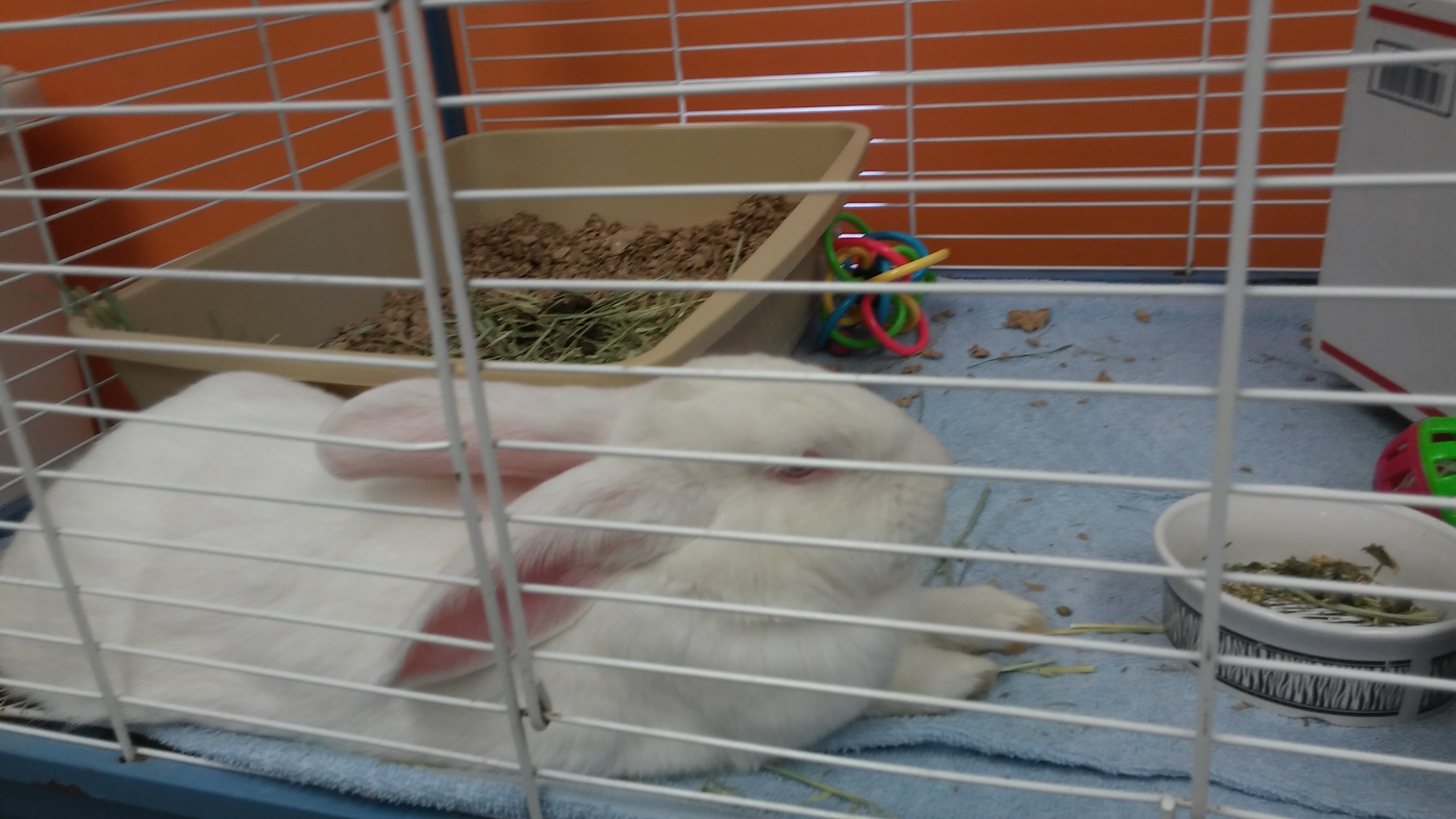 Some items they sell! 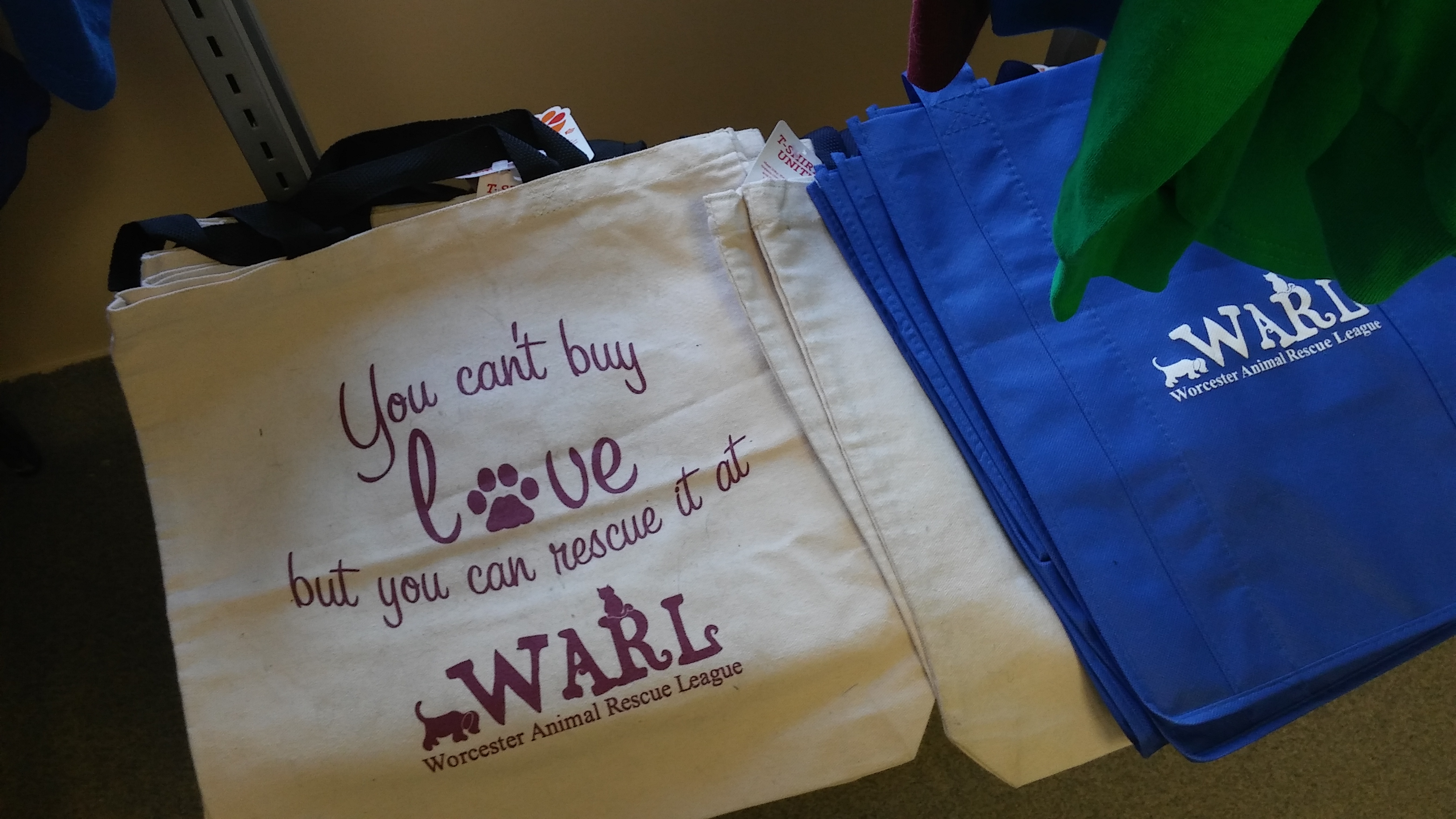 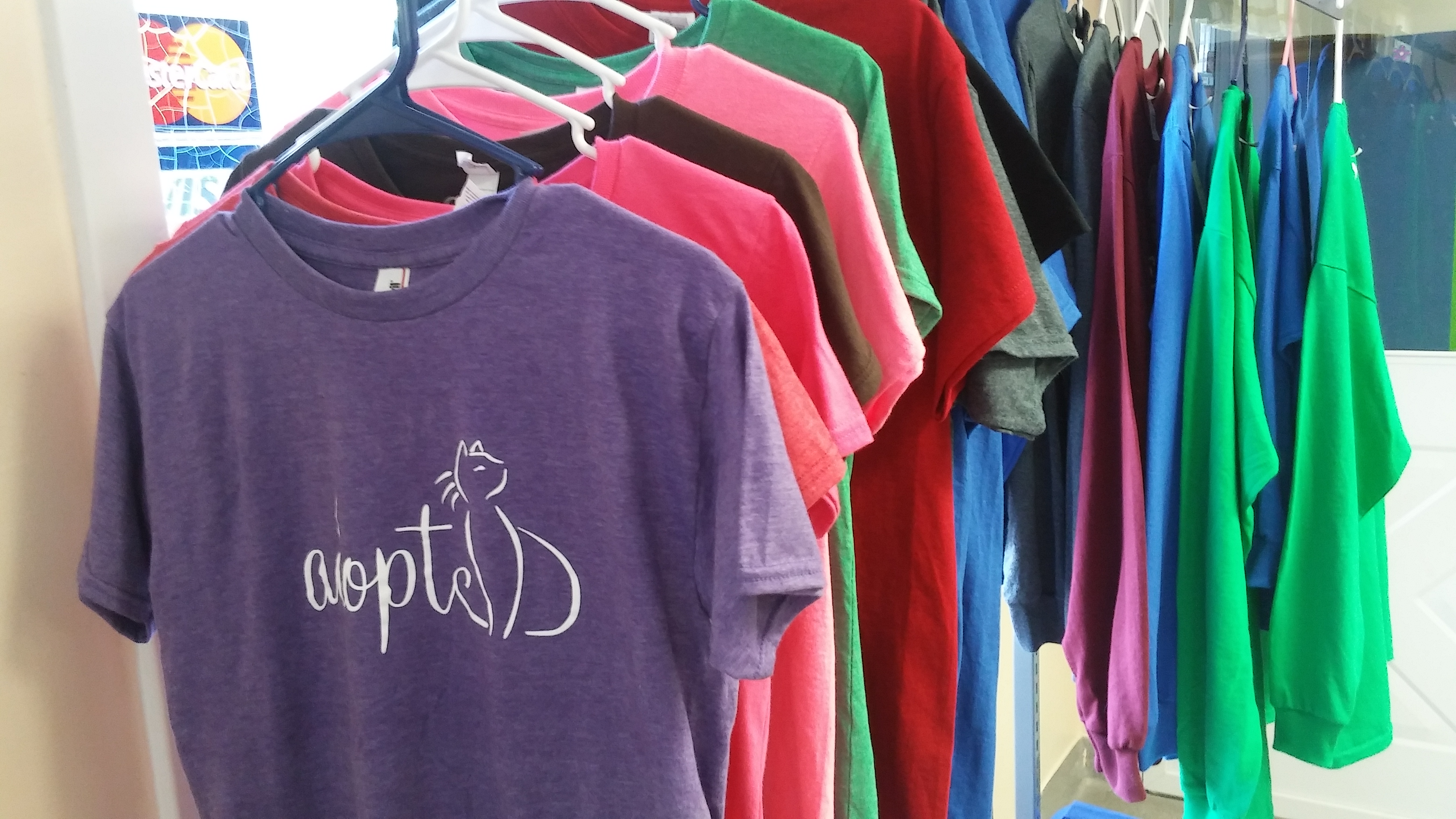 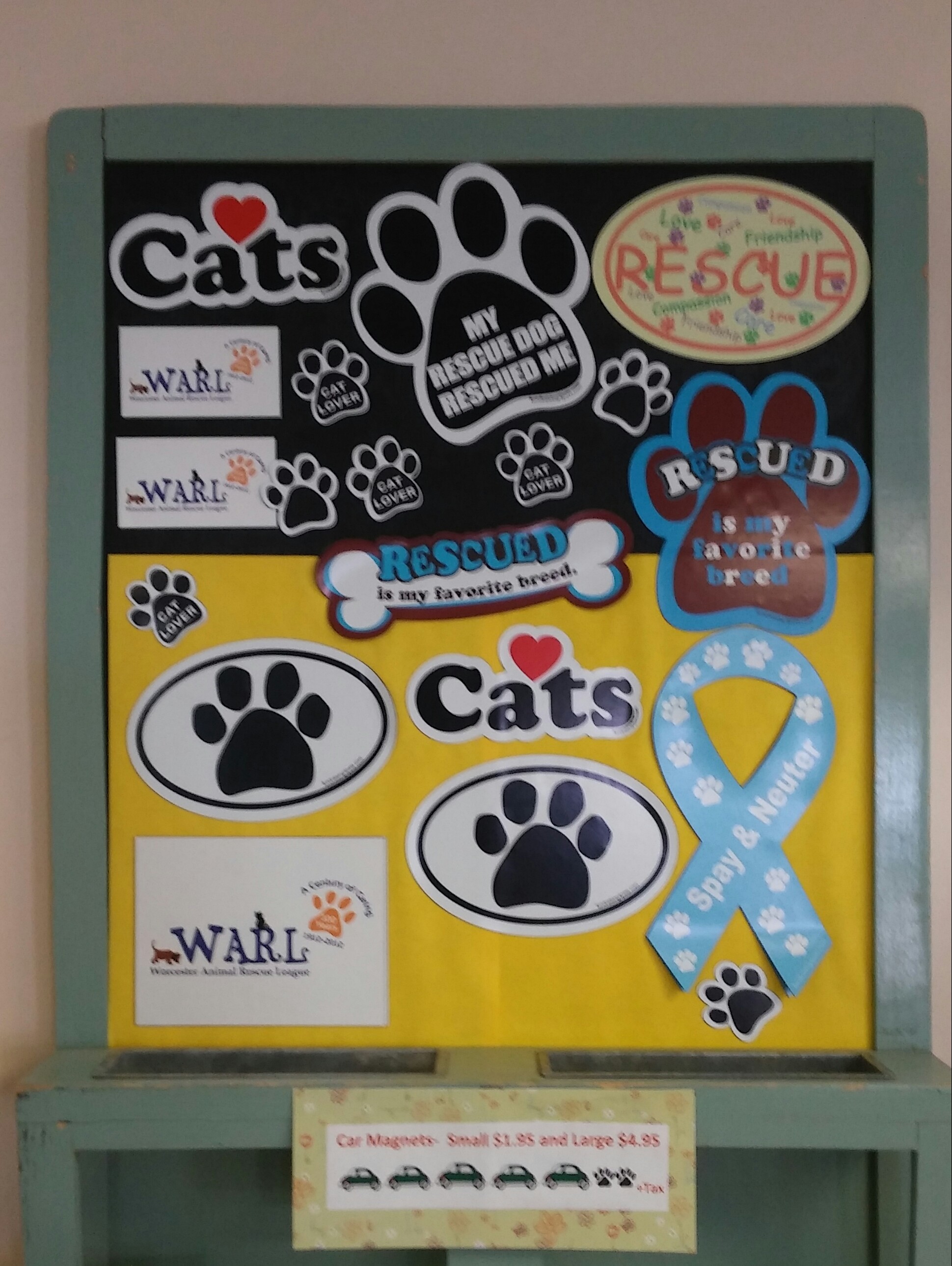 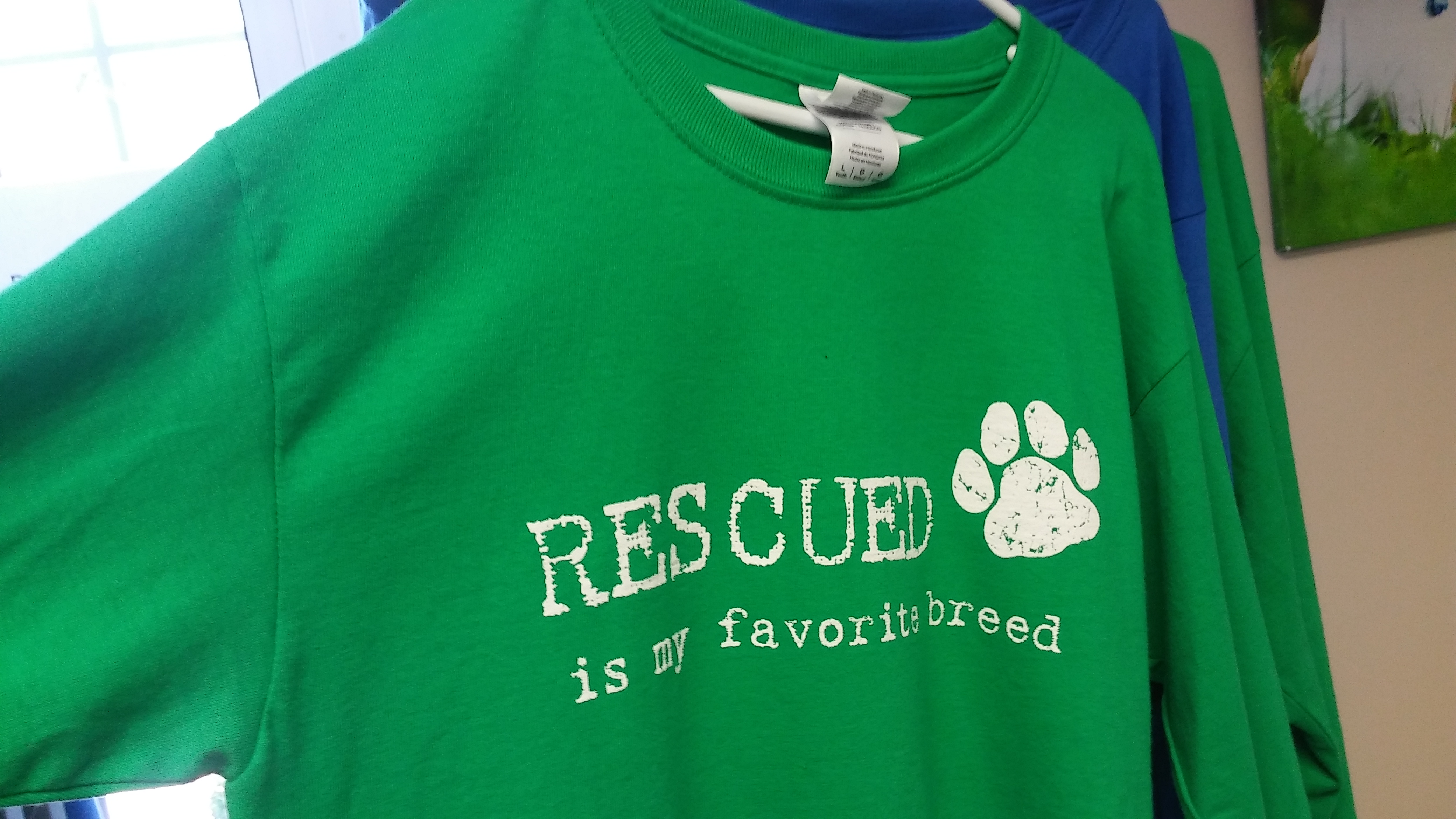 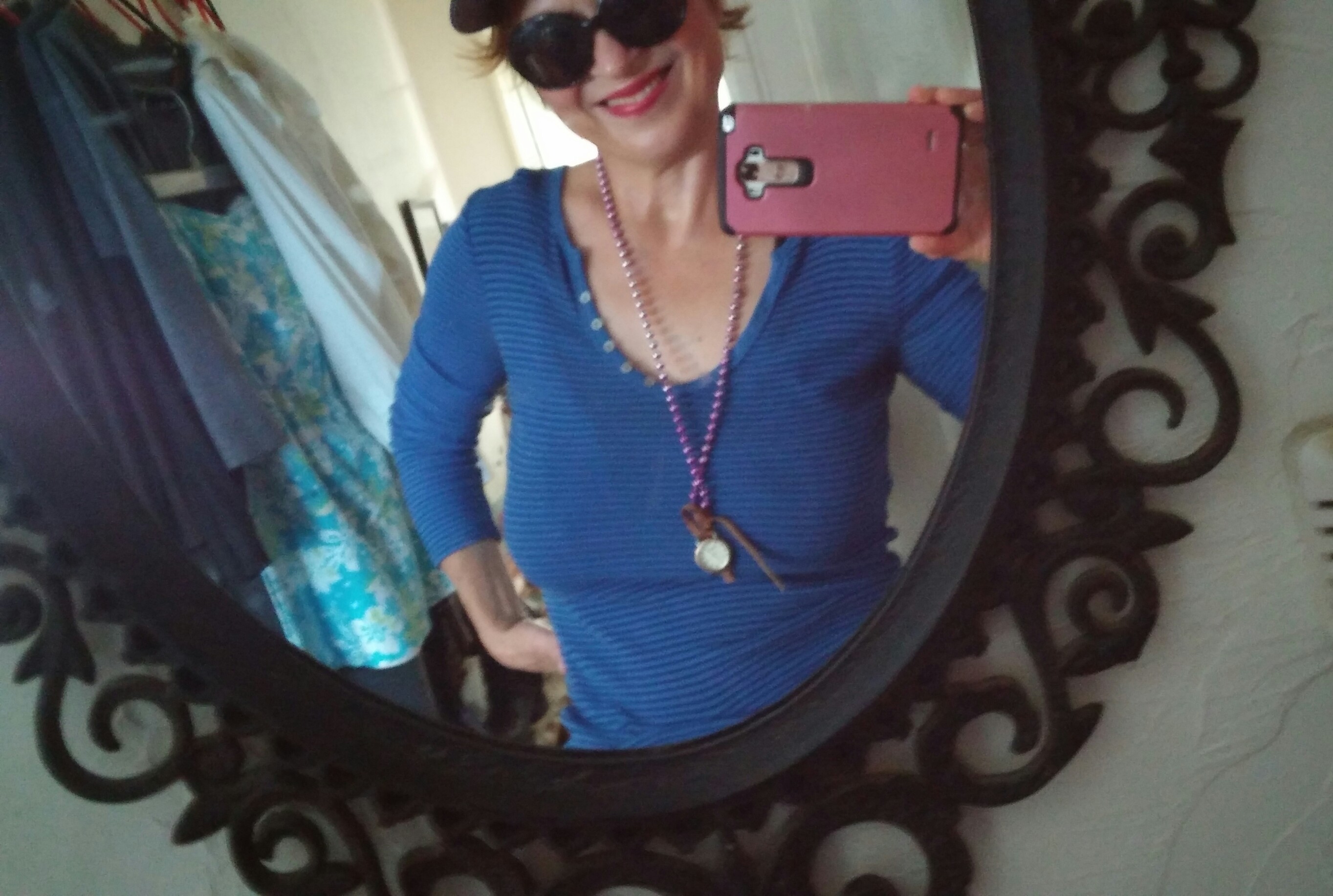 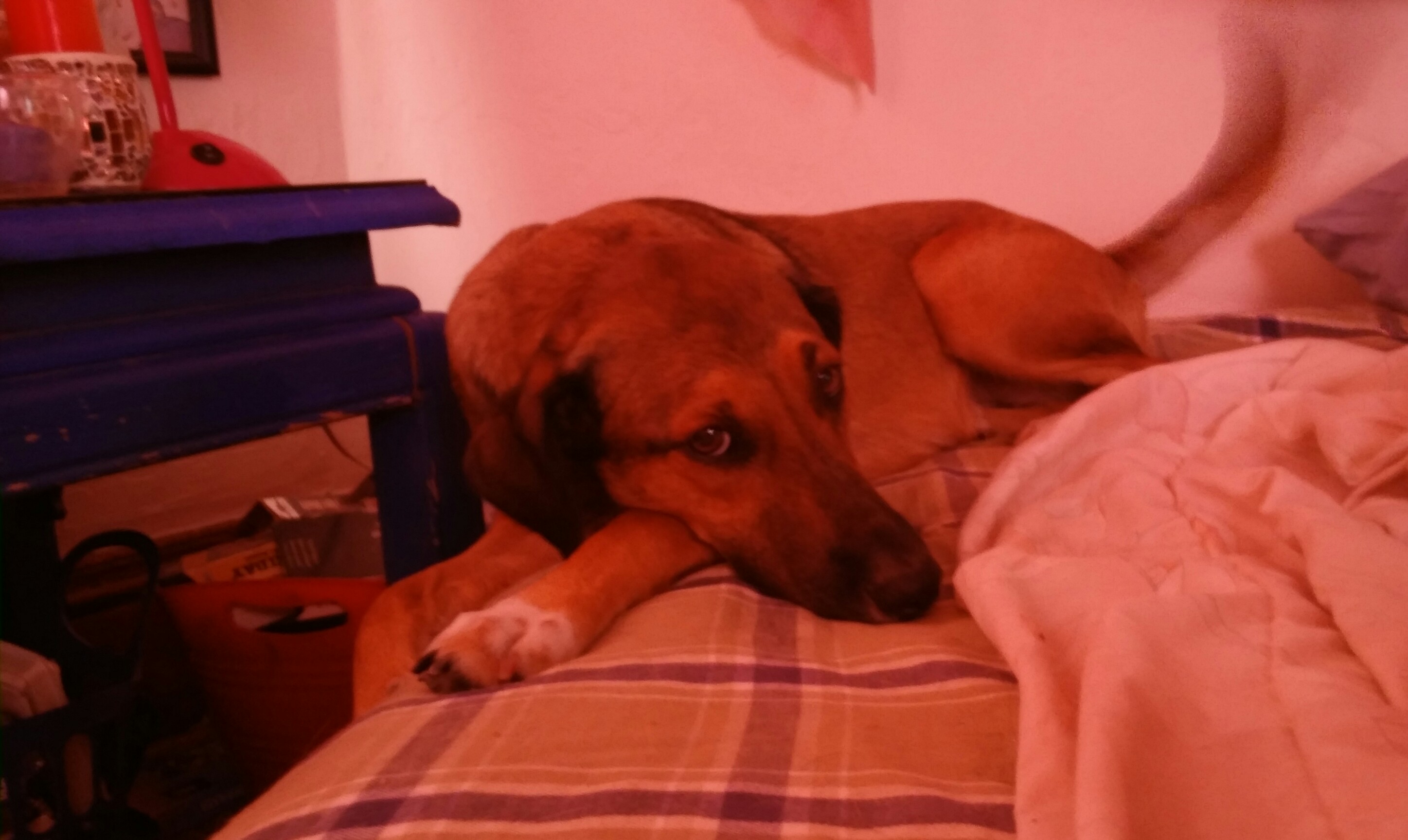 If you’re not ready for the intense commitment of owning a dog, buy some stuff at WARL, and that way you can still help Worcester’s homeless pups and kitties!

Before we get to the InCity Animal Times column …

WHAT’S THE BEST WAY TO THANK AN ANIMAL SHELTER WORKER?

National Animal Shelter and Rescue Appreciation Week runs from November 2 to 8, and the dedicated people who work in our country’s open-admission animal shelters—shelters that welcome every needy cat and dog who comes through their doors and never turn animals away—deserve our thanks and support for the difficult work that they do.

Working in a shelter is physically demanding: Employees heft heavy dogs onto examination tables, unload vans full of 50-pound bags of kibble, scrub down soiled kennels and launder load after load of blankets. They get scratched—and sometimes bitten—by animals who are confused and terrified on arriving at the shelter. Many shelter workers wear scrubs because there’s a good chance that they will be covered with slobber, muddy paw prints, cat hair and some even less appealing substances by the end of the day.

Their work also takes an emotional toll. Shelter staffers assist animals in every condition—from strays who are screaming in pain because they’ve been hit by a car and orphaned newborn puppies and kittens who must be bottle-fed every few hours to bone-thin dogs who are aggressive after being kept chained outside their entire lives and bewildered, frightened cats who have been removed from the only home they’ve ever known after their elderly guardian has passed away.

Shelter workers also have to hear the many excuses that people give for surrendering their animals: He barks too much. He doesn’t bark enough. She’s too friendly. She isn’t friendly enough. We’re moving, and it’s too much trouble to bring him with us. He’s getting old, and the kids want a puppy … and on and on.

People who work in shelters handle all of this because they’re committed to providing a safe haven for cats and dogs who have nowhere else to turn and because they love animals. That’s what makes another aspect of their job so wrenching: the need to euthanize animals in order to accommodate the never-ending stream of cats and dogs who pour through the doors day after day.

It takes a brave and selfless soul to feed, walk, play with and love a dog or a cat for a short time, knowing that you may soon have to give that same animal a painless release from a world that has no decent place for him or her to go. Until breeders, puppy mills and pet stores stop pumping more puppies and kittens into a world that’s already short on homes and until spaying and neutering are the norm everywhere, euthanasia will remain a sad—but merciful—necessity for open-admission shelters. It’s painless for the animals, but for the workers who must perform it, it’s anything but.

On top of the heartache of having to euthanize animals, workers at open-admission shelters are increasingly attacked by anti-euthanasia campaigners and put under tremendous pressure to end euthanasia at all costs. But the alternatives—keeping animals caged indefinitely, turning them away to suffer and die slowly on the streets or handing them over to anyone who will take them (including hoarders)—leave animals in peril.

As much as they might wish for one, shelter workers have no magic wand that they can wave to create homes for all the animals who need them. But each of us can save lives—and make life a bit easier on shelter workers—by preventing more animals from being born in the first place.

Spaying and neutering our animal companions—and encouraging and helping our friends, family, neighbors and coworkers to do the same—is the key to ending animal homelessness and the resulting need for euthanasia. It’s also the best way to say “thank you” to the kind people who care for our communities’ lost and abandoned animals every day.

PETCO’s refusal to evacuate these animals in the face of imminent danger is only the latest incident in the company’s long history of callous disregard for the lives and well-being of the animals it sells. PETA and the mayor of Johnson City are calling for a criminal investigation and appropriate charges against PETCO for abandoning these animals to die in the flood, but many other animals will continue to suffer and die in the pet trade unless caring people turn their outrage into action, by refusing to buy animals—or anything—from stores that treat living beings like inanimate objects.

To understand PETCO’s total indifference toward animal welfare, you only need to look at the deplorable mass-breeding mills from which it buys the animals it sells. PETA has sent undercover investigators into four animal suppliers to the pet trade, and every investigation found animals confined to crowded, miserable, factory-farm conditions; languishing in filth; deprived of the barest essentials, including food and water; severely neglected; abused and left to endure slow, painful deaths. PETCO is well aware of how animals suffer and die in these hellholes, yet it continues to do business with them.

At one PETCO supplier, Atlanta-based Sun Pet, Ltd., PETA obtained undercover video footage of a Sun Pet employee bashing a bagful of hamsters against a table to kill them, among other horrors. Prompted by PETA’s complaint, the Georgia Department of Agriculture (GDA) inspected the facility and found rodents running loose, dead animals in enclosures with live ones, food thrown on top of bedding and rusty cages with sharp, dangerous edges, which Sun Pet was ordered to replace immediately, but didn’t. U.S. Department of Agriculture inspectors confirmed many of these findings and the GDA slapped Sun Pet with a $3,000 suspended fine and two years of probation, but PETCO continues to buy and sell animals from this mill to this day.

PETA’s 2007 undercover investigation of another PETCO supplier, Rainbow World Exotics (RWE) in Hamilton, Texas, revealed similar abuse. We captured heartbreaking footage of a worker castrating inadequately anesthetized rabbits and bleaching their wounds, a manager stomping hamsters to death, live animals being tossed in the trash, a cockatoo starving and dying and more. PETCO has stood by RWE and continues to buy and sell animals from its warehouse.

And PETCO would probably still be selling animals imported by the now-defunct U.S. Global Exotics, Inc. (USGE), if PETA’s undercover investigation hadn’t resulted in more than 26,000 mammals, reptiles, amphibians and arachnids being seized from the facility and a municipal judge divesting the owners of all the animals. At USGE, PETA’s investigator documented animals confined to severely crowded and filthy containers, including soda bottles and milk jugs, litter pans, cattle-feeding troughs and barren wire cages, as well as employees who put hundreds of sick, injured and dying animals in a freezer to die. Some of them, including a squirrel whose neck had been severely lacerated and a chinchilla who was bleeding from a prolapsed rectum, languished for hours before succumbing.

PETCO may not care if animals are bashed against tables at its suppliers or if they drown in their cages at its stores, but it surely cares about its bottom line. It’s up to us to hit PETCO where it hurts—its bank account—by never spending so much as a cent in its stores until it stops selling all animals. People who are ready to care for an animal companion can help stop the flood of homeless animals by adopting from animal shelters and rescue groups instead and having their new companion spayed or neutered.

If you care about animals, you should never buy one from a pet store. That may seem counterintuitive, but PETA’s undercover investigations have demonstrated time and again that pet shops and the companies that supply them treat animals like disposable objects. No thought is given to the fact that they are living beings.

Imagine a worker putting hamsters into a plastic bag and bashing them against a table in a crude attempt to kill them. One hamster languishes—panting heavily and suffering—for several minutes.

Unsalable animals are gassed in a filth-encrusted glass tank. Hamsters are killed when careless employees crush their necks between shipping boxes and box lids. END_OF_DOCUMENT_TOKEN_TO_BE_REPLACED