… up by Union Station a day or so ago. A young guy was asked for dough, then stabbed when he refused to give up the money. (Take it from this city gal: ALWAYS GIVE THEM THE MONEY! And run away!) … More garbage dumped, too! This on top of a couple of shootings and stabbings in the past few weeks – Union Station, lower Shrewsbury Street. And a stabbing – someone got it in the face – at Kelley Square last month. This is what happens when a bunch of misguided folks decide to exclude entire classes of folks in the redevelopment of an inner-city neighborhood. When the housing stock is out of reach for that neighborhood’s residents. When there are no jobs for them in their neighborhood. And when the basic jobs pay shit$$$. People get desperate, they get disengaged, they stab, shoot, dump …

We hope Charlie Baker can solve these real inner-city problems!!

… Dems are much better than Republicans at the nonsexy, bread and butter, social issues. LIKE IMPROVING A TON OF PEOPLE’S LIVES. THE AMERICAN DREAM. The American Dream and our social safety net, brought to you by FDR, Lyndon Johnson … Take FDR! Now FDR could TRULY REVIVE our inner-city NEIGHBORHOODS. Charlie Baker will stupidly harp on welfare reform, an easy way to demonize the poor. Problem NOT solved.

Expect more stabbings and shootings in and near the Canal District as the have-nots learn where a lot of the haves hang out!

On the other hand, all the ballot questions, EXCEPT THE EXPANDED-BOTTLE BILL,turned out the way we wanted: YES to earned sick time, casinos; NO to indexing the gas tax to inflation. The expanded bottle bill? Well, if our grandkids don’t know what a polar bear is and New Orleans falls into the ocean we only have our selfish selves to blame. Blame it on our stubborn refusal to fix our factory farms (HUGE PRODUCERS OF GREENHOUSE GASES which wreak havoc on global temperatures/climate), our refusal to get behind renewable energy wholeheartedly … and our ability to just keep making more and more garbage and dumping it on places like the Canal District’s sidewalks!

Yep. The rejection of a new and improved Bottle Bill – Massachusetts in all its cheapskate glory. Why give up 20 cents or a buck or two when buying bottles of water or juice or sports drinks only to GET IT BACK IN A FEW HOURS OR DAYS after we’ve drunk the water or juice? Why let go of a few nickles and dimes … for a week or so?! Why suffer a minor inconvenience when we can trash our planet? Pathetic. 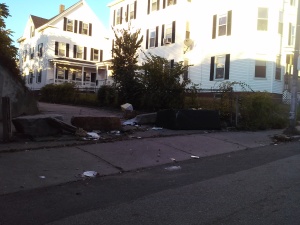