Congressman McGovern has been a leading voice on the need for the U.S. to strengthen its response to the crisis and take new steps to minimize innocent civilian casualties and increase aid to the families affected. In July 2015, Congressman McGovern traveled to the region with Senator Tim Kaine (D-VA) and other members of a Congressional delegation to meet with government officials and aid organizations.

“America must be a leader on human rights at home and abroad. I am grateful to Secretary Kerry and the State Department for their tireless work to achieve a ceasefire and urge them to continue these essential efforts. Hundreds of thousands of Syrians have been killed and millions have been internally displaced or have become refugees,” Congressman McGovern said. “The Syrian government must be held accountable for its continued targeting of civilians. When there is no accountability for human rights abuses and civilian casualties, conflicts and unrest like this only worsen. The World Food Programme and other aid organizations are at the border, ready to deliver food and humanitarian supplies. We must stop the bombing to ensure that humanitarian assistance gets to the Syrian people who so desperately need it.

“Congress should be talking about and debating these issues. We have strong Syrian communities in Worcester, Massachusetts, and cities across the country who are ready to welcome refugees and help provide these families with a safe haven and fresh start. When we hear about the Syrian conflict, too often it’s only discussed in terms of the U.S. and Russia,” McGovern added. “Ultimately, there must be a political solution – one which allows the Syrian people to determine their own future and respects the rights of all the Syrian people.” 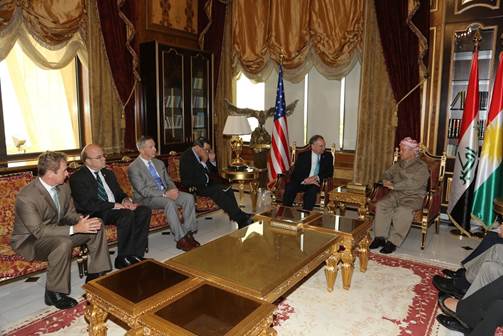 In July 2015, Congressman Jim McGovern (second from left) with Senator Tim Kaine and other U.S. lawmakers in Erbil, Iraq during a Congressional delegation visit to the region

According to the Syrian Observatory for Human Rights, an estimated 430,000 people have been killed in the Syrian civil war between March 2011 and August 2016, of whom 86,692 were civilians. The UN Office for the Coordination of Humanitarian Affairs (OCHA) calculates that 4.8 million Syrians have been forced to leave the country, and 6.5 million are internally displaced – half of the country’s total population of 22 million. In 2016, 13.5 million people are in need of humanitarian assistance, among them 6 million children and 5.47 million who are in hard-to-reach areas, including close to 600,000 people in 18 besieged areas.

This humanitarian crisis, the largest the world has seen since World War II, cannot be characterized as mere “collateral damage” of the civil war. Rather, the war’s belligerents, particularly the government of Bashar al-Assad and the Islamic State, deliberately target civilians and actively oppose humanitarian efforts aimed to mitigate the crisis. Furthermore, the Syrian regime has prosecuted the war with complete disregard for international humanitarian law, as evidenced by the use of chemical weapons and barrel bombs, the besieging of civilian populations, the systematic targeting of medical facilities and personnel, and the blocking of humanitarian assistance. The most recent partial ceasefire is at risk after the aerial bombardment of an authorized aid convoy. A negotiated end to the conflict does not appear to be in reach in the foreseeable future.

In this context, the hearing will examine what is being done and what more could be done to protect civilians in Syria. Witnesses from organizations operating on the ground in Syria will discuss their efforts to assist civilian populations inside the country, what they have achieved, the obstacles they face and their recommendations. Witnesses from organizations that specialize in protection and accountability will discuss measures to reduce the vulnerability of civilians as the war continues and to create the conditions for accountability for war crimes in an eventual post-war context.

· Sarah Holewinski, Senior fellow, Center for a New American Security, and Board of Advisors, Center for Civilians in Conflict (CIVIC)