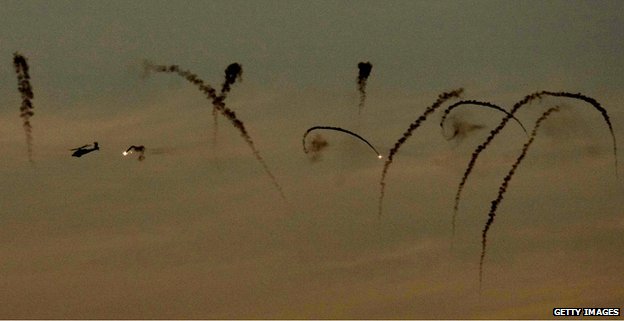 The Gaza conflict is being played out to the noise of modern air raid sirens and drones, as well as the thump of shellfire and the roar of rockets, but the sound of war is always changing.

In Gaza, correspondents have described the whine of Israeli drones overhead. In Arabic they’re known as “Zananna”, literally “whining child”.

Then there is the occasional sound of warplanes streaking overhead and the thump of shells from Israeli ships.

In southern Israeli towns, residents are familiar with the sound of air raid sirens prompted by rockets from Gaza. There is the distinctive sound of the Iron Dome air defence system intercepting rockets in the sky above. …

Nine years ago today we invaded the nation of Afghanistan. I’d just turned 40. I had a Discman and an Oldsmobile and had gotten really into LiveJournal. That was a long time ago. It was so long ago, does anybody remember why we’re even there? I think everyone wanted to capture Osama bin Laden and bring him to justice. But he got away sometime in the first month or so. He left. We stayed. Looking back now, that makes no sense.

Needing to find a new reason for the mission, we decided to overthrow the religious extremists who were running Afghanistan. Which we did. Sorta. Unlike Osama, they never left. Why not? Well, they were Afghans, it was their country. And, strangely enough, a lot of other Afghans supported them. To this day, the Taliban only have 25,000 armed fighters. Do you really think an army that tiny could control and suppress a nation of 28 million against their will? What’s wrong with this picture? WTF is really going on here?

The truth is, I can’t get an answer. My generals can’t quite tell me what our mission is. If we went in there to rout out al-Qaeda, well, they’re gone too. The CIA tells me there are under 100 of them left in the whole country!

My generals have also admitted the following to me:

1. There is no way we can defeat the Taliban. They enjoy too much popular support in the rural areas, the majority of the country. END_OF_DOCUMENT_TOKEN_TO_BE_REPLACED

President Obama has decided to escalate the war in Afghanistan. In his speech he was very clear about the purpose of that escalation: “I make this decision because I am convinced that our security is at stake in Afghanistan and Pakistan. This is the epicenter of violent extremism practiced by Al Qaeda. It is from here that we were attacked on 9/11 and it is from here that new attacks are being plotted as I speak.”

Many commentators have questioned whether the means chosen by the President are feasible: Will we be able, in a year and a half, to train an Afghan army and police force able to keep the Taliban in check? Will we be able to persuade the Afghani government to eschew corruption? Few people believe that these goals can be reached in less than 5 years — if ever. END_OF_DOCUMENT_TOKEN_TO_BE_REPLACED