Cruelty-free, of course!  From PETA.ORG

We love animals, and we love food. We also love purses. So we’re in full support of the trend that combines vegan purses with food and animal images. Whether you’re going back to school or want to make your coworkers jealous, here are 12 vegan bags — for ANY budget — that you must have to make a statement any time of the year! 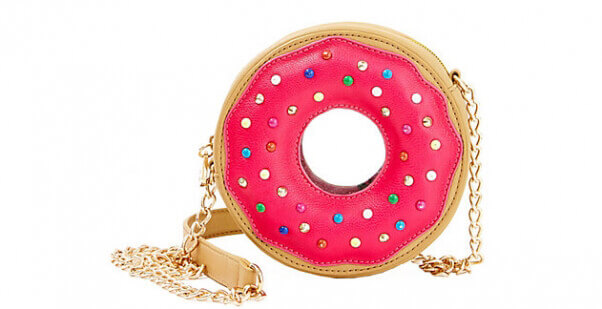 This raccoon bag is too adorbs: 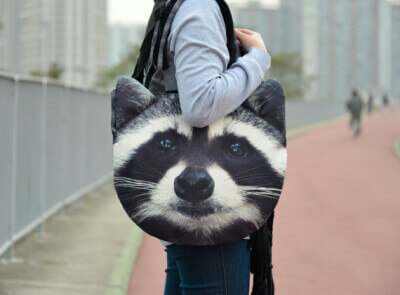 Look at that face. That face is cute. You should carry around a bag with a picture of that cute face. It’s logic.

Every true cat lady (or cat dude!) must have this: 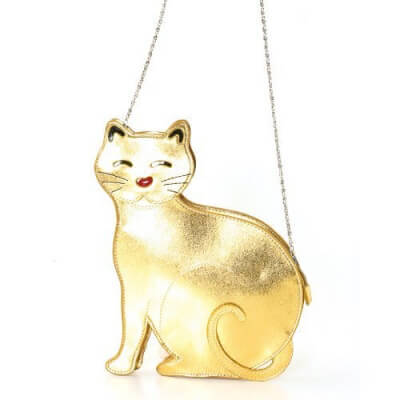 This bag TRULY makes a statement: 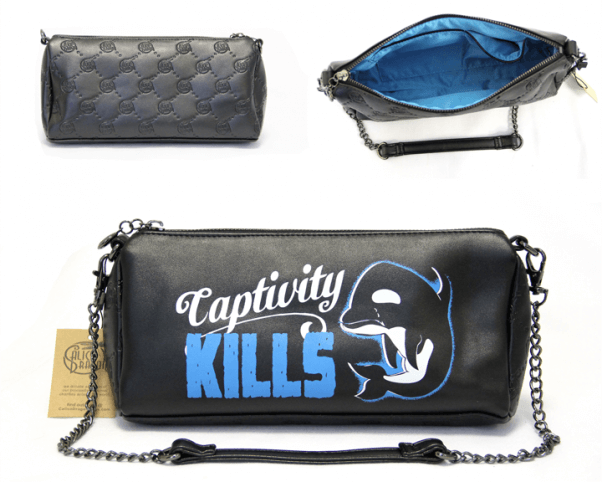 Wear this and boycott SeaWorld. Duh.

This glorious, glorious tofu bag is a must-have: 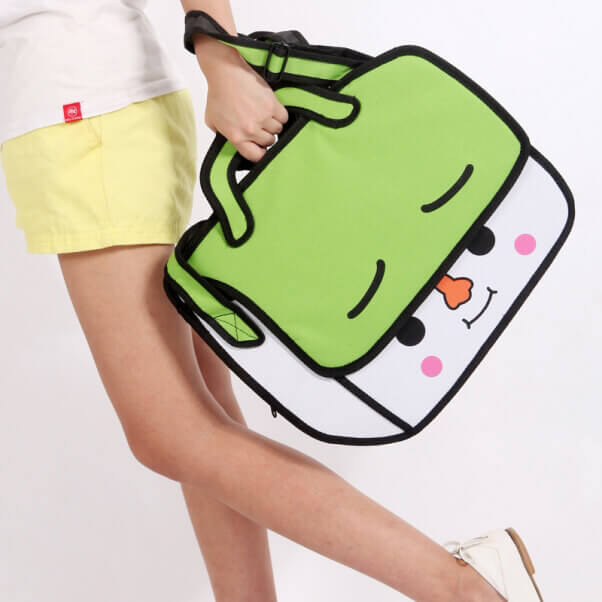 This elephant backpack that is 100 percent OK to carry around as an adult: 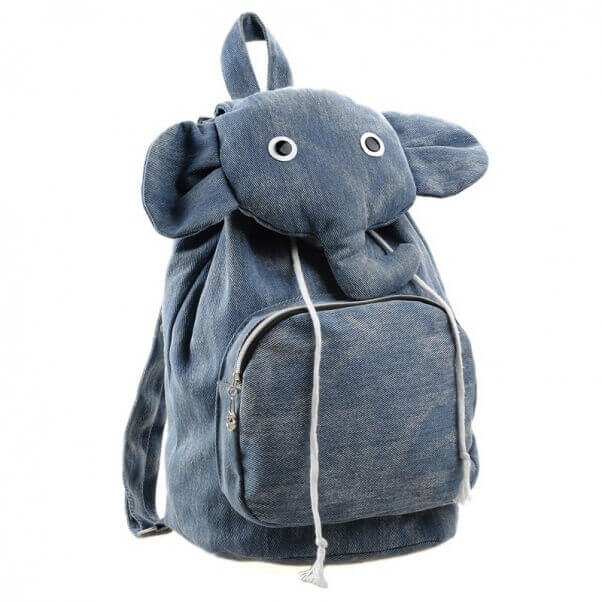 (Every time you wear this, remember tourge Ringling to retire its elephants from the circus NOW if you want to level up as a vegan. Just sayin’.)

This PB&J bag is obviously essential:

The PETA-approved vegan company Cykochik is now featuring one of our snack-time faves. No, the bag isn’t edible, but it is ridiculously cute. 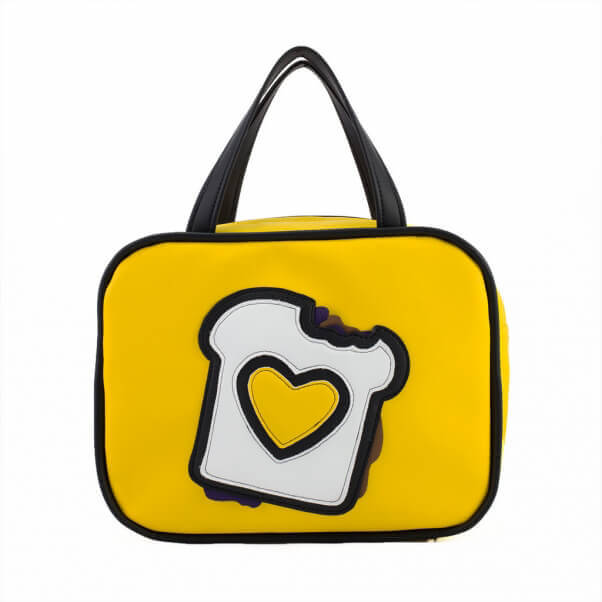 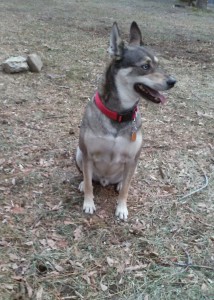 Time to bundle up. A blast of Arctic air recently wreaked havoc on much of the country, with some areas experiencing record low temperatures, white-out highway conditions and snowfall measured in feet. Old Man Winter has arrived early this year, and he’s packing a punch.

But don’t let the polar chill put your compassion in a deep freeze. You can show a little kindness to animals and still stay warm this winter simply by choosing fur- and wool-free coats and accessories.

You probably already know why wearing real fur is coldhearted. From birth until death, animals on fur farms—where most fur comes from—live in abject misery. When eyewitnesses toured fur farms in Europe, they found animals with untreated, oozing wounds and broken or malformed limbs. Dead animals infested with maggots were left to rot among the living. Many animals circled frantically in their cages, driven insane from the confinement. When most people think about the fur industry, the first thing that comes to mind is probably the animals’ terrifying slaughter. Few people consider that they suffer from neglect, loneliness and a mind-numbing lack of stimulation day in and day out, usually for months and sometimes for years on end, before that final moment arrives.

But wool, too, should be off-limits for caring consumers, and here’s why: PETA’s international exposé of the wool industry revealed that docile sheep are punched in the face, slammed into the floor, kicked and even killed by impatient shearers, all just to produce wool sweaters and coats.

PETA investigated the wool industry in the U.S. and in Australia—the world’s largest exporter of wool—and found workers violently punching scared sheep, stomping and standing on the animals’ heads and necks and beating and jabbing them in the face with sharp electric clippers. One shearer, who twisted sheep’s necks and limbs to restrain them, twisted and bent one sheep’s neck repeatedly until it finally broke, nonchalantly remarking, “I might have killed it.”

Because shearers work so quickly, many sheep also have large swaths of skin cut off during shearing, and most sheep are cut—some severely—on their abdomen, hindquarters and limbs. When this happens, workers use a needle and thread to stitch up the most gaping wounds—without any painkillers and in the same unsterile environment in which the sheep were shorn.

Down also has a dark side: It often comes from birds who are plucked alive. Rushed workers yank fistfuls of feathers out of the birds’ delicate skin, and some are plucked so hard that their skin is torn open, leaving them with gaping wounds.

Wearing animal skins is not even the best way to beat the chill. You can bet that mountain climbers, skiers and other sporty types who head outdoors when temperatures drop are not wearing mink or wool coats to fend off the winter wind. Synthetics are both warmer and lighter than animal skins. They’re also more durable, and unlike fur and wool, they can be tossed into the washing machine when they get dirty.

No amount of fluff can hide the fact that animals suffer immensely in the fashion industry. This winter, choose animal-friendly vegan coats, sweaters, scarves and gloves to stay warm and toasty without buying into cruelty.

Paula Moore is a senior writer for the PETA Foundation.

I’ve been an animal rights advocate for more than two decades, and during that time I’ve come to believe that the animals killed in the name of fashion are some of the most abused beings on the planet. Foxes on fur farms spend their whole lives pacing the wire floor of a tiny cage, slowly losing their minds from the extreme confinement and deprivation. On angora rabbit farms, workers violently rip the fur out of rabbits’ skin as the animals scream in pain. Snakes are nailed to trees and skinned alive in the belief that live flaying keeps their skin supple.

But recent footage released by PETA highlighting cruelty documented at 19 wool sheds in Australia—the world’s leading exporter of wool—and on 14 ranches in the U.S. has shocked even many veteran PETA staffers. Shearing sheep for their wool is a violent process that leaves these gentle animals battered and bloodied. I urge everyone reading this to watch the videos on PETA’s website—and then trade in your wool sweaters and jackets for animal-friendly options.

In the wool industry, time is money, and since most shearers are paid by volume, not by the hour, they have an incentive to work as quickly as they can, with little regard for the sheep’s welfare. One worker can shear up to 27 sheep—or 35 lambs—every single hour.

PETA’s investigators in Australia documented that shearers punched the struggling sheep, poked them in the eyes and routinely jabbed them in the face with sharp clippers, leaving them bleeding. In the investigative footage, one sheep’s face can be seen with blood soaking the wool all around it.

Workers stomp on sheep and stand on their heads and necks. They grab and drag sheep by their legs and slam them against the hard floor of the shearing shed. The ordeal doesn’t end until the sheep are completely shorn—and many of the animals are literally thrown down chutes into holding pens.

Terrified lambs, taken from their loving mothers, cry out before and during their first shearing. “They’ve been separated from their mums and they’re calling for them,” one worker explained. “They’re going, ‘Mom! Mom!'”

Because the shearers work so quickly, most sheep are cut—some severely—on their abdomen, hindquarters and limbs. When this happens, workers use a needle and thread to try to sew shut the most gaping wounds—without painkillers and in the same unsterile environment in which the sheep were shorn. Many sheep also have swaths of skin cut or pulled off during shearing. One worker even cut off three sheep’s tails with clippers.

The investigators never saw anyone reprimanded for their callous treatment of the sheep—or any veterinary care administered to them. Instead, injured sheep were shot in full view of their companions. One was butchered, and the body was left where other sheep could see it.

PETA’s investigator in the U.S. documented similar abuses. One shearer repeatedly twisted and bent a sheep’s neck, breaking it. At another ranch, workers hauled a critically ill ram—struggling to breathe—into a trailer to be sheared. The ram was left in the trailer overnight and was found dead the next morning.

Most people would agree that electrocuting foxes for their fur or ripping the skin off live snakes and leaving them to writhe in agony is wrong. The pain and fear endured by sheep in the wool industry are just as real as the suffering of other animals used and abused for their skins.

PETA’s videos are hard to watch. If you care about animals at all, they will upset you. But these animals don’t need our tears. They need our action. When you see the word “wool” on a coat label, please remember the sheep who were beaten bloody and dragged along the floor by their hind legs. And leave that item on the rack.