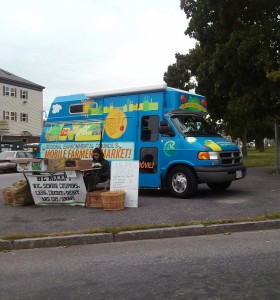 Get you fresh, locally grown veggies, fruits and more at this street corner out of this happy blue (my fave color!) REC van!

Every Thursday afternoon! Until Nov. 1

GOOD FOOD that EVERYONE can afford, thanks to the Regional Environmental Council (REC).

The Main South CDC continues to work on strengthening its neighborhood in many rich and exciting ways.  The MSCDC continues to manage a large portfolio of affordable and livable apartments and to support home ownership.  The MSCDC is part of a growing community collaborative to improve educational outcomes of its children.   In short:  the Main South CDC is alive and kicking.

Bad News: The public altercation between the Main South’s CDC executive director Steve Teasdale and board member Billy Breault  was regretful.  If I could turn the clock back and make it not happen I surely would.

Steve has led the organization from the beginning. While progress in Main South has been all about teamwork,  you would be heardpressed to find anyone who would deny that Steve – his dedication, intelligence, talent and controlled ego – is the leader of the pack that made it all happen.

As an active Board member of the MSCDC I can assure everyone that neighborhood outreach continues to keep residents, businesses, and partners informed and engaged.  Likewise I affirm that the MSCDC is finding ways to address the troublesome intersection, is engaged in getting to the final needs of the federal audit, is committed to strong partnership in Main South Promise Neighborhood, and is working on the sale of 93 Grand Street to stabilize the MSCDC’s financial position on this property.  All with Board knowledge and support.  No secrets, no misconduct.

Those of us connected to the Main South CDC and to Billy Breault are saddened.   Both are good.  Both make great contributions to our City.  Together isn’t working anymore.  But life will go on.  The Main South CDC will survive.  Billy will find new ways to boost Main South.

With California’s foie gras ban poised to take effect in less than two months, some of the Golden State’s chefs are scrambling to mount a last-minute campaign to overturn the ban. Birds raised for foie gras are force-fed up to 4 pounds of grain and fat every day via a pneumatic tube that is rammed down their throats—a process that former California Sen. John Burton colorfully describes as “doing the equivalent of waterboarding.”

California should uphold its ban on foie gras—and the rest of the U.S. should follow the state’s progressive lead.

Burton, who spearheaded California’s ban and built in a seven-year grace period specifically to allow California’s lone foie gras producer, Sonoma-Artisan Foie Gras, to come up with an alternative to force-feeding birds, has no patience for the chefs’ last-ditch appeal.

“They’ve had all this time to figure it out and come up with a more humane way,” he said. “I’d like to sit … them down and have duck and goose fat—better yet, dry oatmeal—shoved down their throats over and over and over again.”

Force-feeding causes the birds’ livers to swell to as much as 10 to 12 times their normal size, resulting in a painful disease known as hepatic steatosis (which makes foie gras a diseased organ and therefore illegal to sell in the U.S., according to a lawsuit filed this month by several animal protection groups). The birds often suffer from internal hemorrhaging, fungal and bacterial infections, and hepatic encephalopathy, a brain disease caused when their livers fail. They can become so debilitated that they can move only by pushing themselves along the ground with their wings.

A journalist who visited Sonoma-Artisan Foie Gras in 2003 reported that force-fed ducks “moved little and panted” with the effort, and an employee admitted that “[s]ome [ducks] die from heart failure as a result of the feeding, or from choking when they regurgitate.”

A recent undercover investigation at the farm revealed filthy, bedraggled birds (failure to preen is a sign of illness or distress), birds panting and struggling to breathe, birds who were too ill to stand, and even the bodies of dead birds among the living. An average of 20 percent of ducks on foie gras farms die before slaughter, 10 to 20 times the average death rate on a regular duck farm.

Force-feeding birds has been denounced by every expert in the field of poultry welfare. Dr. Christine Nichol, a tenured poultry husbandry professor at the University of Bristol, believes that foie gras production “causes unacceptable suffering to these animals. … It causes pain during and as a consequence of the force-feeding, feelings of malaise as the body struggles to cope with extreme nutrient imbalance and distress ….”

Foie gras production is so cruel that it has been banned in more than a dozen countries, including Israel, the U.K., Germany, Norway, Poland, Sweden, and Switzerland, and it will be outlawed throughout the European Union by 2020.

Really, the only people defending foie gras are those who produce it and cook with it, and with thousands of other delectable ingredients available, it’s hard to imagine why chefs are fighting tooth and, er, bill to hang onto this deadly “delicacy.” Their objections should be filleted, puréed, flambéed and stuffed. Surely, any creative chef worth his or her artisanal sea salt can make do without a tortured duck’s liver.