TODAY! Be there! At Worcester State University … 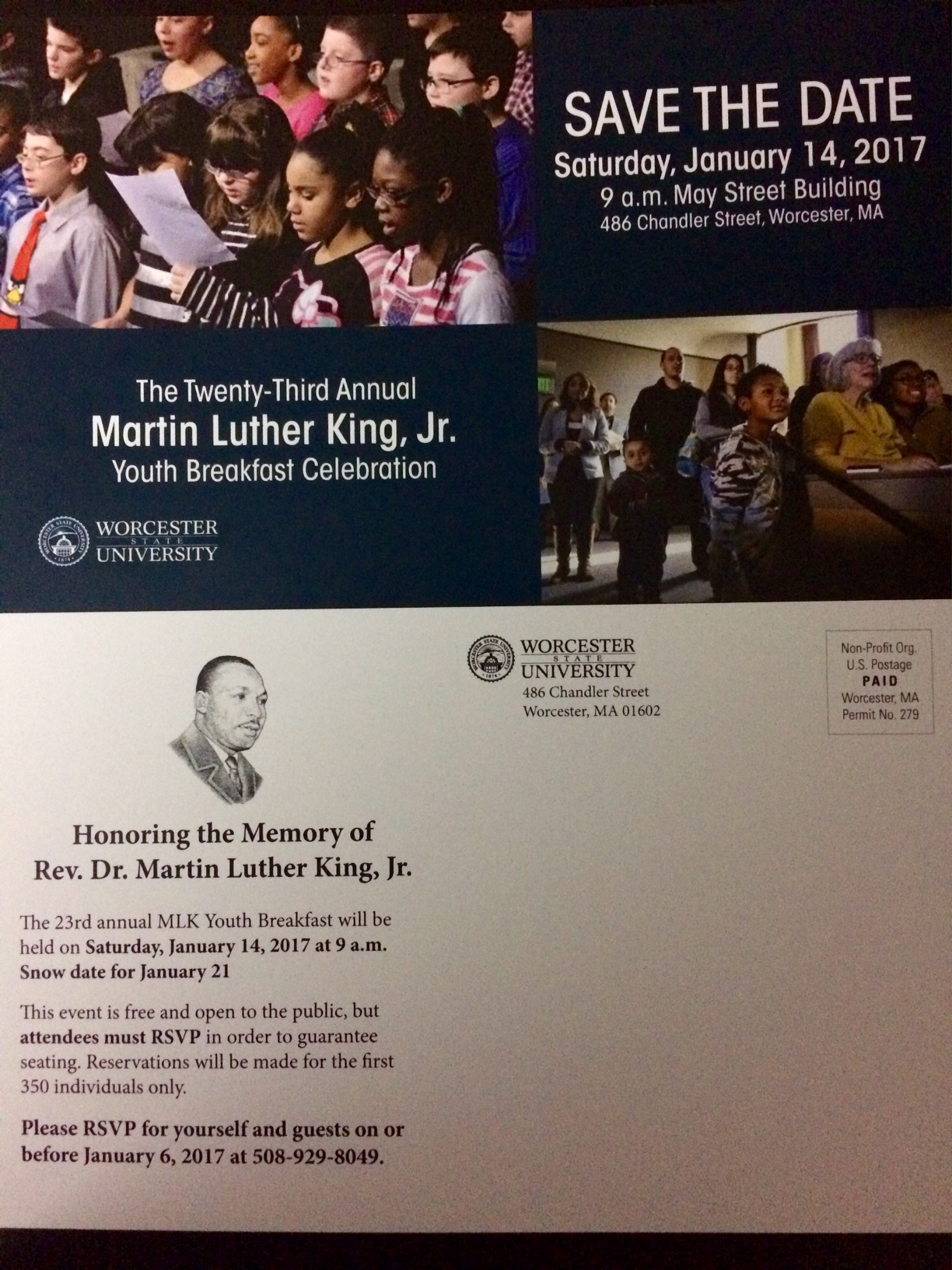 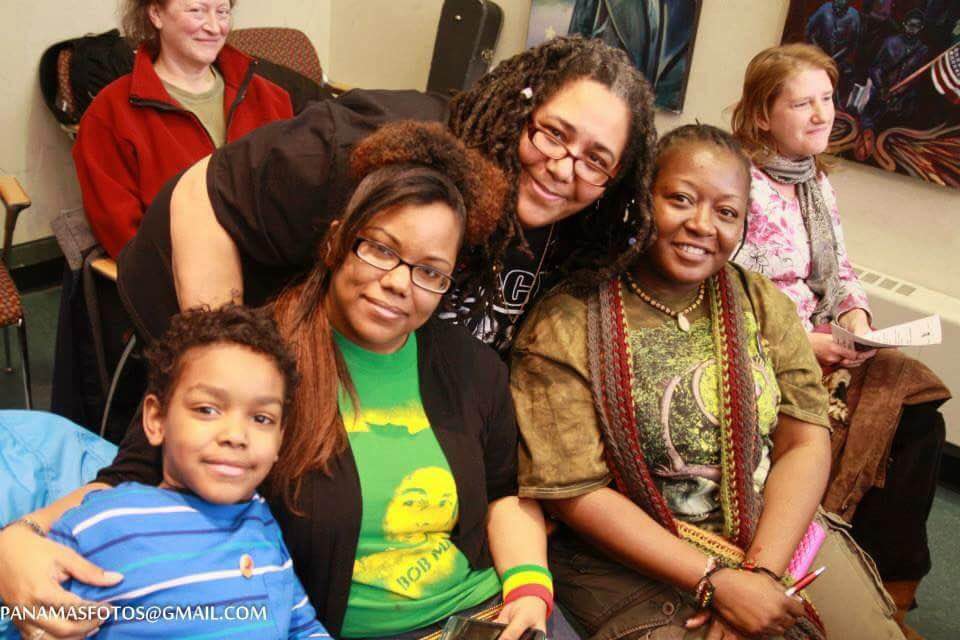 “In the End, we will remember not the words of our enemies, but the silence of our friends.”

“Our lives begin to end the day we become silent about things that matter.”

As we prepare to celebrate your 8[8]th birthday, and also, the 5[2]st Anniversary of the Selma marches, I thought I would write you a letter, to let you know what’s been going on.

I have been thinking a lot about the civil rights movement and the protests that have been happening since the no indictment verdicts came in Ferguson, Missouri, after the murder of Michael Brown and in the murder of Eric Garner at the hands of the NYPD.

Some people are asking, why are they protesting, what do they want? What do they think protesting and shutting down city streets will do?

My response: What did Dr. King and his supporters think a bus boycott would do? What did they think a 50-mile march would do?

The bus boycott lasted 381 days. For one year and 16 days Black people in Montgomery, Alabama, did not use public transportation! Needless to say, that hit the city in the pocket-book. City officials resisted a long time. Them good old boys did not want those Black folks in the front of their buses. Really!

“Initially, the demands did not include changing the segregation laws; rather, the group demanded courtesy, the hiring of black drivers, and a first-come, first-seated policy, with whites entering and filling seats from the front and African Americans from the rear.

Although African Americans represented at least 75 percent of Montgomery’s bus ridership, the city resisted complying with the demands. To ensure the boycott could be sustained, black leaders organized carpools, and the city’s African-American taxi drivers charged only 10 cents-the same price as bus fare-for African-American riders. Many black residents chose simply to walk to work and other destinations. Black leaders organized regular mass meetings to keep African-American residents mobilized around the boycott.”

This is so powerful!

And then Selma, 10 years later!

Even after the Civil Rights Act of 1964 forbade discrimination in voting on the basis of race, efforts to register black voters met with fierce resistance in southern states such as Alabama .

In early 1965, you and SCLC decided to make Selma, located in Dallas County, Alabama, the focus of a voter registration campaign.

As you well know, Alabama Governor George Wallace was a notorious opponent of desegregation, and the local county sheriff in Dallas County had led a steadfast opposition to black voter registration drives. As a result, only 2 percent of Selma’s eligible black voters (300 out of 15,000) had managed to register.

You won the Nobel Peace Prize in 1964, and you drew international attention to Selma during the eventful months that followed.

On February 18, white segregationists attacked a group of peaceful demonstrators in the nearby town of Marion. In the ensuing chaos, an Alabama state trooper fatally shot Jimmie Lee Jackson, a young African-American demonstrator. In response to Jackson’s death a massive protest march from Selma to the state capitol of Montgomery, 54 miles away was planned. A group of 600 people set out on Sunday, March 7, but didn’t get far before Alabama state troopers wielding whips, nightsticks and tear gas rushed the group at the Edmund Pettis Bridge and beat them back to Selma. The brutal scene was captured on television, enraging many Americans and drawing civil rights and religious leaders of all faiths to Selma in protest.

You also led another attempt to march on March 9, but turned the marchers around when state troopers again blocked the road.

That night, a group of segregationists beat another protester, the young white minister James Reeb, to death.

Alabama state officials (led by Walllace) tried to prevent the march from going forward, but a U.S. district court judge ordered them to permit it. President Lyndon Johnson also backed the marchers, going on national television to pledge his support and lobby for passage of new voting rights legislation he was introducing in Congress.

Some 2,000 people set out from Selma on March 21, protected by U.S. Army troops and Alabama National Guard forces that Johnson had ordered under federal control.

After walking some 12 hours a day and sleeping in fields along the way, they reached Montgomery on March 25.

Nearly 50,000 supporters-black and white-met the marchers in Montgomery, where they gathered in front of the state capitol to hear you and other speakers including Ralph Bunche (winner of the 1950 Nobel Peace Prize) address the crowd.

“No tide of racism can stop us,” you proclaimed from the building’s steps, as viewers from around the world watched the historic moment on television.

A movie based on the events of SELMA [was released last year]. Can’t wait to see it with my children, family, friends and their children. Because this is a piece of history from which we need to learn.

“We are faced with marches, protests and boycotts as we face the continued brutality of the police force against young people of color, who end up dead instead of in jail. Not only people of color, but the majority are.

We are developing a network of organizations and advocates to form a national policy specifically aimed at redressing the systemic pattern of anti-black law enforcement violence in the US. We are demanding, that the federal government discontinues it’s supply of military weaponry and equipment to local law enforcement. We are advocating for a decrease in law-enforcement spending at the local, state and federal levels and a reinvestment of that budgeted money into the black communities most devastated by poverty in order to create jobs, housing and schools. This money should be redirected to those federal departments charged with providing employment, housing and educational services.” www.BlackLivesMatter.com

Dr. King, the exposure of the injustices via the internet is world wide. It is so hurtful when these police officers are not found guilty of murder, when the murder took place in front of millions of people.

We are still striving to do this non-violently, but the blind are still so blind. We have our demands and are voting and trying to work through the system. A lot of our friends are still silent. We are trying to help our White allies understand their privilege. We are tired of burying our children. Things have improved since the 1950s and 1960s but, unfortunately, we still have a long way to go.

Happy Birthday, Dr. King! Your words still ring true in this day and time. We need your spirit with us, to help guide us, more than ever! Please stay near.

Jennie Clough, who graduated in January 1878, was born in 1857 to one of Worcester’s most prominent African-American families. Her grandfather, Peter Rich, had been born a slave in Lancaster, Mass. As a young man he moved to Worcester, where he became one of only three “colored” property owners in the community. END_OF_DOCUMENT_TOKEN_TO_BE_REPLACED