When a multistory building that housed several clothing factories collapsed in Bangladesh in 2013, killing more than 1,100 garment workers, the world got a rude awakening: Our cheap clothes come at a high cost to others. This issue is back in the news now that police in Bangladesh have filed formal murder charges against dozens of people for their alleged roles in the tragedy. A hearing is scheduled for June 28.

Most of us would surely agree that no one should be forced to work in a deathtrap just so that those of us in the West can have cheap shirts and sandals. But how can we ensure that the clothes in our closets haven’t caused others to suffer needlessly?

The simplest way is to stop buying leather.

Just as the manufacture of other types of clothing has been outsourced to countries such as Bangladesh and China, where wages are low and unsafe working conditions are common, so has the production of leather goods.

PETA’s affiliate PETA Germany investigated the growing leather trade in Dhaka, Bangladesh. Witnesses visited the poor residential district of Hazaribagh in Dhaka, where 15,000 laborers, some as young as 10, toil in more than 200 tanneries.

Workers stand barefoot in toxic chromium effluent and handle acids and bleaches that can cause chronic skin diseases and even cancer. Even if workers are given cheap rubber boots to wear, they’re often not equipped with face masks or safety goggles to protect against the fumes that can cause severe respiratory problems. A full 90 percent of tannery workers there die before the age of 50.

Studies in India, too, have shown that tannery workers face a high mortality rate, mostly from respiratory diseases resulting from chromium exposure. Chromium, one of the most widely used—and dangerous—chemicals in the tanning process, produces the toxic chemical byproduct hexavalent chromium, or chromium VI, which is a known human carcinogen. Several studies have established links between the chromium used in tanning and cancer of the sinuses and lungs.

These chemicals endanger not only tannery workers but also those who live nearby. Mineral salts, formaldehyde, coal-tar derivatives, cyanide-based dyes and other dangerous substances are routinely used during tanning, and they are often simply dumped into rivers or on riverbanks.

And of course, animals suffer, too. Animals killed for their skins are some of the most abused beings on the planet. Because skin is the most economically important coproduct of the meat industry, buying leather supports factory farms, where animals are warehoused in dark, crowded sheds, and slaughterhouses. Farmed animals’ eyes and lungs burn from the stench of ammonia, and they are castrated and dehorned without the benefit of any painkillers. At the slaughterhouse, as the terrified animals are prodded and kicked along to their death, they can smell, hear and see what is happening to those in front of them in the slaughter line.

The good news is that it’s easy to get the look of leather—if that’s what you want—without contributing to such suffering. A growing number of retailers now offer shoes, jackets, handbags, wallets and other items made from cork, bark, vegan Ultrasuede derived from post-industrial polyester, microfibers made from recycled plastic bottles and other high-quality materials that are less harmful than leather—for both humans and animals.

I’m a blue-collar gal through and through. As working class as you can get!

I grew up working class/poor in Worcester’s Green Island neighborhood. My beloved Polish grandfather worked his whole life in the Dudley textile mills, PROUDLY joining the union there; my mother worked 6O!! hours a week at the old Oscar’s Cleaners on Millbury Street – a dry cleaners. For minimum wage, courtesy of cheapskates, the ASADOURIAN FAMILY, her whole life! EXPLOITED to the max.

I grew up around construction guys, day laborers. Exploited too.

My grandfather was an excellent carpenter, building this huge porch swing  for my Bapy, which proudly swung on our Lafayette Street front porch for years… He was always making things… stools, benches, even tin cups…

For five years I went out with the Old Injun Fighter (OIF) a contractor/ handyman/ carpenter who loved doing “finish work,” could put a porch on a house, put in a bathroom, and, yes, build a little home, if he needed to. He’s from blue collar Lynn, where his dad worked in the leather factories there. (His mother was a photographer for one of the city’s department stores. She was artistic, beautiful, mercurial/crazy … and ahead of her time…)

I put out InCity Times, which requires a lot of blue color LOCOMOTION! Such as delivering thousands of ICT newspapers every two weeks, running around selling ads, dealing with printing guys, knowing about skids, and lifts, and using your back the right way.

AS FAR AS WCLC AND ITS REQUESTS OF THE CITY of Worcester, REGARDING THE LABOR AT THE OLD COURTHOUSE and Brady Sullivan developers from New Hampshire I say:

Because, and I speak from experience/ a deep knowledge:

Lots of developers and contractors EXPLOIT workers. If they can get a borderline homeless neighborhood guy to do grunt construction work for $8 or ten bucks an hour, they will. The guy may have a drinking problem, he may collect social security disability, he may even have a drug problem.  Still … he is a body to exploit, someone to haul crap away, dig holes…He is dispensable. He is a sitting duck. HE WILL SAY YES. THIS ENABLES THE CONTRACTOR to save a TON of money by not going with a reputable shop that pays its laborers around 20 bucks an hour and its professional carpenters, bricklayers, etc even more $$$$.

CONTRACTORS HATE PAYING workers compensation.  It’s expensive.  The OIF will do it BECAUSE IT’S THE LAW AND IF CAUGHT BREAKING THE LAW HE WILL HAVE TO STOP WORK AND PAY A FINE, BUT HE HATES IT. If contractors can wiggle around the law, and not get caught, many will. TOUGH LUCK TO THE WORKER WHO FALLS OFF A ROOF AND BREAKS A LEG or trips on a cable and slips in the mud and cracks his head or drowns in the mud as a huge hole, without proper supports, fills up.

Which leads me to my next point … Construction worker is THE MOST DANGEROUS JOB THERE IS.

Not firefighter, not cops, BUT CONSTRUCTION WORKER.  Hundreds die or are critically injured every year.

CONTRACTORS often hire illegal immigrants and exploit these fearful folks TO THE MAX. SOMETIMES ITS CLOSE TO SLAVE LABOR. This allows them to undercut legit shops and get the job…2. make more $$$. Contractors love to make money!

Several times in Worcester, at the GREENWOOD STREET PRICE CHOPPER supermarket, later at night, I saw several contractors in their vans coming out with wagons full of groceries. One guy: HE OPENED THE VAN BACK DOOR. I saw a huge group of laborers inside the van sitting on their haunches – they were dark skinned…They took the food.  He slammed the door. I WAS MORTIFIED.

Slave labor. Does anyone NOT believe this still goes in?? … here, too?

WHEN CONTRACTORS HIRE AND EXPLOIT ILLEGAL IMMIGRANTS THEY CHARGE the developer/customer as much as ONE THIRD TO A HALF less $$$ than a legit contractor who is FOLLOWING THE LAWS AND PAYING INTO WORKERS COMP, PAYING a living wage etc. does.

This gets them the job because their labor costs hit rock bottom, which they pass on to their customers. They undercut the union shops following the rules, paying their guys living wages.

The groups that are trying to educate WORCESTER CITY COUNCILORS, people like JACK DONAHUE OF THE CARPENTERS UNION, are not making stuff up.

They know, hands on, just how rotten things can be.

They are not commie lowlife hipsters trying to undermine America.

They are good family men, good standing members of the community. They live in Worcester and want what’s best for her.

THEY ARE FIGHTING FOR AMERICA AND THE AMERICAN WAY. (Not unlike Superman!)

We, as a city, need to develop the Worcester Courthouse, but NOT AT THE EXPENSE OF THE WORCESTER WORKER, LABOR LAWS, GOOD WAGES, A SAFE WORK SITE. The courthouse is a gem in a great safe Worcester neighborhood. The Worcester Art museum, Institute Park, WPI, the Worcester Historical Museum’s mansion are all in this great neighborhood. THERE WILL BE OTHER DEVELOPERS, if Brady Sullivan walks away. WE JUST NEED TO MARKET THE BUILDING WITH THE NEIGHBORHOOD and DO IT AGGRESSIVELY!

The carpenters union guys are GOOD GUYS supporting the American right to work safely and legally at a work site while MAKING A LIVING WAGE.

Worcester city councilors Ric Rushton, Joe Petty, George Russell, Phil Palmieri, Konnie Lukes, Tony Economou and colleagues must RESPECT where Donahue and his colleagues are coming from. BECAUSE THEY ARE SPEAKING TRUTH TO $$$/POWER. 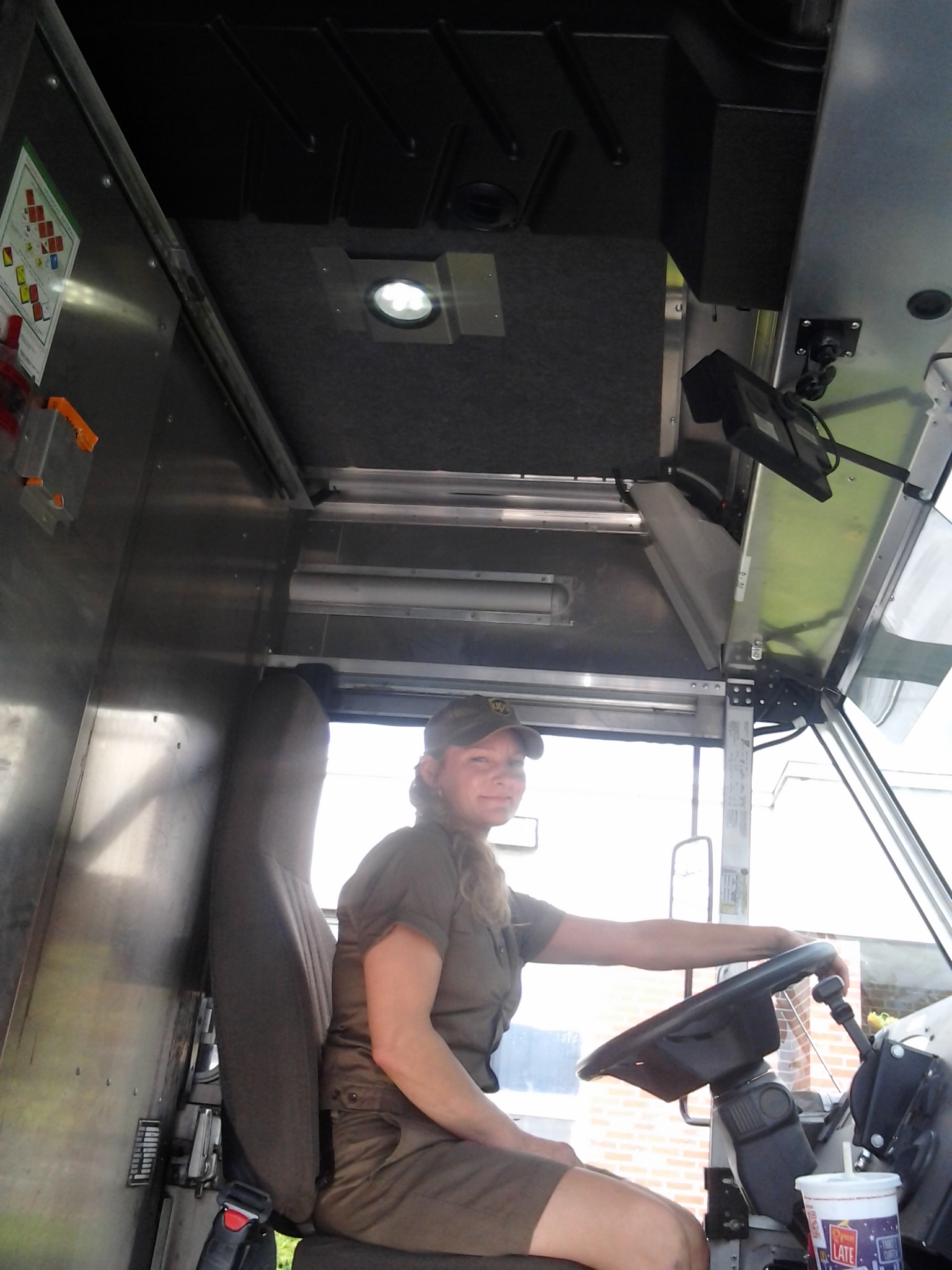 … last week. We love it when women do “men’s work” aka higher-paying jobs. We love it when we see women being independent, out in the world, not stuck behind boring desks as secretaries (the tools of men or other women) or switchboards! We want to see more women OUT IN THE WORLD! Running their own businesses, running their own lives. Being independent behind steering wheels, hammers, kennel runs, newspaper delivery stops! PHYSICAL! Using our bodies, our muscles! Outdoors in the sun – and rain – and sleet. Using our minds! FREEDOM, baby! Once you get a taste of  it, you never, ever want to go back to the status quo!

I digress! … It is fantastic to see women UPS drivers in Worcester County! They were a rare sight just a few years ago. But they, like all people demanding equal opportunity, pushed for the driver jobs. They got ’em. Now there are more female drivers around. Driving the trucks is where you make the dough. …

Still, there was some unsettling news at UPS. Right before the Labor Day holiday, they announced they would be cutting workers’ health benefits. A multi-billion dollar, global corporation! … There oughta be LAWS!!!

Rose to the UPS gal: May I take your photo for my paper?

Rose: I am so sorry that UPS has cut your health benefits.

UPS gal, looking serious: I just heard about it yesterday. No smiles.

Rose (to herself): What is happening in this great land of ours?

Shame on our political “leaders”!!

Why is President Obama nibbling at the minimum wage issue? Where is our local state rep, Mary Keefe, on this issue, one that she said she would CHAMPION? And where does state rep candidate Dan Donahue stand on the $10/$11/hour living wage all MA workers need? He is getting a free ride to a great paying job courtesy Joe Petty, Jim McGovern, Tim Murray. Have any of these guys NOT HAD ANY CONNECTIONS??? To $200,000 a year jobs! To nice restaurants and influence and cushy car seats. Let them spend a week or two bouncing around in UPS trucks, delivering packages. Then maybe they’d do the right thing!

We need to restore worker rights!

Here are some good stories on labor and America.  Click on the links below! – Rosalie Tirella