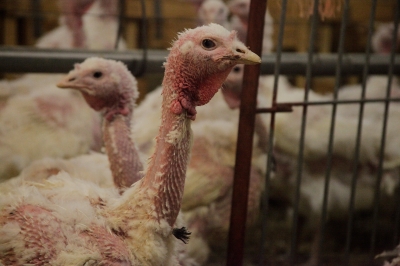 Factory farms!😢😢😢 Birds pluck their own feathers when they are stressed!!

The silver-haired man scowled, the thirtysomething could barely mask his contempt, the teller looked the other way and the woman piling turkey breasts into her cart just ignored me.

You’d think that the T-shirt I was wearing was emblazoned with “Socialism Is Sexy!” Instead, it featured a drawing of a turkey beneath the words “Eat No” and was the focus of an unscientific experiment: With Thanksgiving coming up, I wanted to see if anyone, anywhere — at the big-box store, the mall, the bank or the grocer’s — would ask, “Why?”

The fact that they didn’t underscores why 45 million turkeys will be slaughtered for Thanksgiving again this year.

Had they asked, I would have told them that these exceptional animals experience fear and pain just as we humans do, explained that the meat industry chews them up and spits them out, and pointed out that roasting an animal’s flesh is antithetical to the holiday spirit.

And I would have suggested that they visit a sanctuary and get to know the turkeys who live there in peace and security. People who’ve had the good fortune to spend time with turkeys relish the experience.

One turkey, Marnie, who lives at a sanctuary in New York, is the undisputed boss of the barn. Nicknamed “The Alpha,” she’s all sass. Another, Amy, lives at another New York sanctuary. She’s a sweet, shy girl who falls asleep when her feathers are stroked. And Garner is a people bird: When volunteers clean his quarters in Massachusetts, he plants himself in front of them to get their attention.

Turkeys raised for Thanksgiving are hatched in incubators — instead of enjoying their mother’s warmth, they huddle around a heat lamp. After a few weeks, they’re crowded by the thousands into rank, windowless sheds, their “home” for the rest of their abbreviated lives. The intense stress can make them unnaturally aggressive, so in order to keep them from hurting or killing each other, parts of their toes and beaks are cut off—without any painkillers.

In 1970, the average turkey raised for meat weighed 17 pounds. Today, they’re bred, drugged and genetically manipulated to gain weight fast. The turkeys are so abnormally heavy — 28 pounds on average — that their legs often buckle and break under the strain. They’re also prone to congestive heart and lung disease and, because they can’t mate naturally, are forcibly artificially inseminated.

They’re only 3 to 5 months old when they’re shoved into a crate, trucked to the slaughterhouse and shackled by the legs, which sometimes fracture in the process. Their heads are dunked in electrified water, their throats are slit and then they’re submerged in a tank of scalding-hot water for feather removal.

A single slaughterhouse can kill 360 turkeys a minute. When the stunning is botched, which isn’t unusual on high-volume kill lines, the turkeys are conscious throughout the ordeal.

Their frozen carcasses are then shipped to the supermarket for you to pick through.

That would have been my answer had anyone asked why not eat turkeys (or any other type of animal). I would’ve reminded them that Thanksgiving is about compassion and grace and then asked how on Earth, on a day when families get together in a spirit of goodwill, serving the flesh of another sentient being could possibly be part of the celebration.

It would’ve been a rhetorical question. 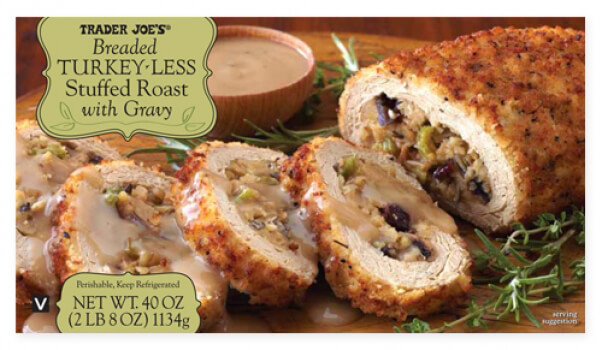 Delicious – and turkey-less!!! Buy it ready-made at TRADER JOE’S grocery store (inexpensive AND healthy!), located on Rt 9 in Shrewsbury – just over the bridge!