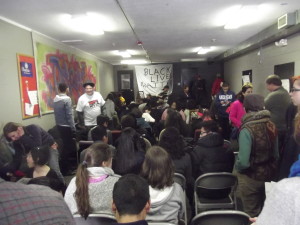 They blocked the intersection for four and one half minutes as a gesture to the four and one-half hours that Michael Brown’s body lay in the street after being shot dead by a police officer in Ferguson, Missouri.

The protesters blocked the streets by the Vernon Hotel and Kelly Square Pizza.

This is one of the busiest intersections in Worcester, an intersection where motorists have the mind set of not stopping for anything. There were a few tense moments during the blockade. At one point a woman motorist drove within a few inches of the protesters. The protesters were somewhat surprised by her reactions, as some of the protesters had handed out flyers to all of the stopped motorists, explaining their actions. The woman had a child in the car.

At another point a driver of an 18-wheeler got out of line and drove up to the protesters with his horn sounding. It apparently was so loud that it hurt the ears of some of the children on the sidewalk: The children held their hands over their ears.

Another protester was assaulted by a man who got out of his truck and ran down the down the hill and pushed one of the demonstrators.

All of the incidents were defused by people. When an ambulance approached the blockade without its lights flashing, it saw the blockade and put on its flashers. The demonstrators allowed the ambulance to move through without it stopping. Some of the protesters doubted that there was any emergency.

Near the end of the demonstration three Worcester police cruisers and one Massachusetts State police cruiser came to Kelly Square.

One of the protesters told two officers that the demonstration was breaking up and the police officers took no action.

The third police officer talked about the discrimination lawsuits against the Worcester Police based on the failure to promote so called minority police officers.

The State Police officer refused to engage in conversation with the protesters.

The first was to continue the national and local dialogue on police misconduct.

The second goal was to send a message to Worcester City Councillor Konstantina  Lukes and columnist Diane Williamson that the minor inconveniences of traffic delays is a legitimate form of protest, not unlike a permitted parade down Main Street.

Some of the Kelly Square protesters attended the MLK, Jr. Day dinner held by Communities United on Piedmont Street. They gave a description and explanation of their actions. They were warmly received by the audience and support was expressed.  The audience expressed this support in the form of talk about reclaiming the activism of Dr. Martin Luther King, Jr.

It did not seem that people were going to accept the Worcester City Council’s actions, without more speech and resistance.