Why did I pitch this Bill Murray does A CHRISTMAS CAROL video a few years back? SCROOGED. Watching it now and thinking: This movie is excellent!! … Murray always had that sexy pathos. It couldn’t be erased even when he oozed that famous SNL sarcasm. … WOW. THIS FILM IS TERRIFIC. Not as amazing as GROUNDHOG DAY, starring Murray and Andie McDowell, but still pretty wonderful. Very ’80s, too, unfortunately: big hair, big shoulder pads, baggy pants everywhere … But, hey, we all looked pretty hideous back then. Let’s say a prayer for all the day glo eye shadow! 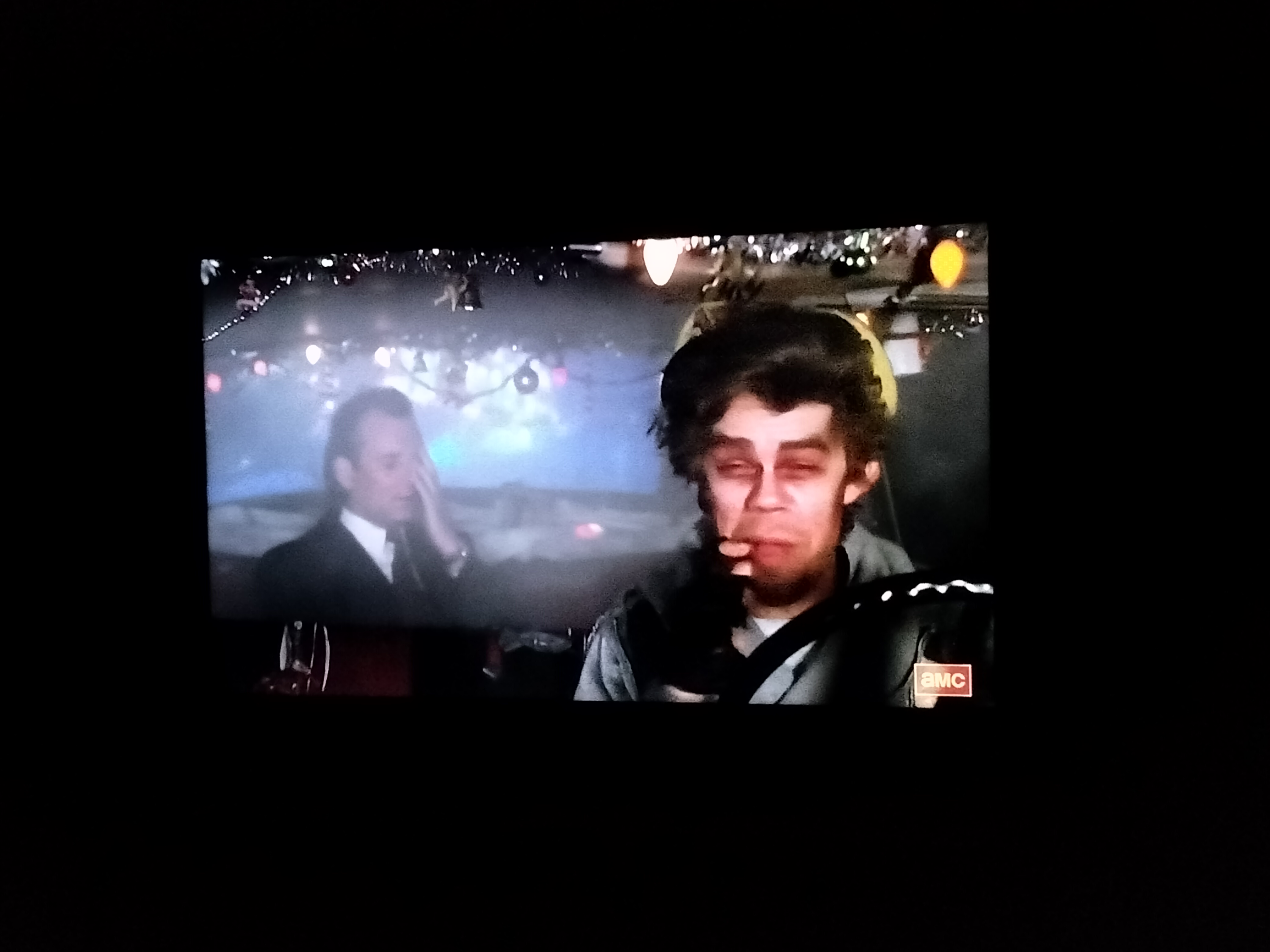 The Ghost of Christmas Past takes Bill Murray for a wild ride!

Bill Murray is a great actor. If you’ve never seen GROUNDHOG DAY, watch the movie this Christmas. Murray and love interest McDowell are fun, real…Murray, with that droopy, hang-dog expression is a man encased in a shell of disdain. Andie melts the shell and he opens himself to love. A great movie to watch during the holidays!

Here, in SCROOGED, Murray’s the modern day Scrooge, head of a big tv network in New York City. He’s got a penthouse apartment, expensive booze and women. His life is fun but hollow. His ghosts of Christmas past, present and future change his perspective. They are the ’80s movie and music icons (plus a few surprises like Robert Mitchum ♥️) we all loved. A special gift is the feisty, fist-throwing Carol Kane, Christmas ghost extraordinaire of the present. Pink and adorable and petite… sweet baby talking but lethal, Kane kicks, whacks, judo juts, head butts Murray into FEELING AGAIN. 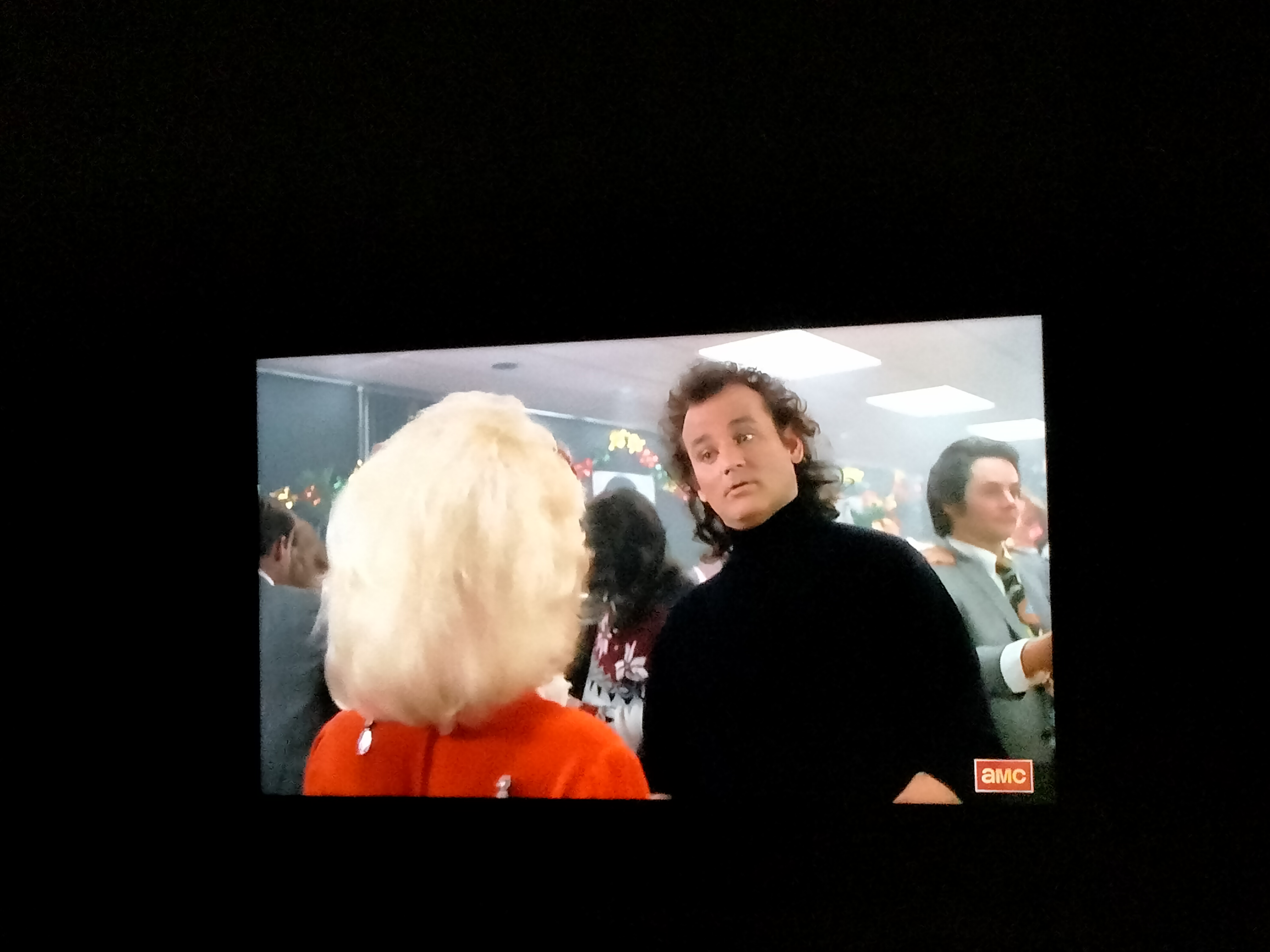 Murray at a Christmas party of his past. Years later, he runs the tv station and has cancelled all staff parties!

I am watching the film…the actors’ names escape me. We’re still with Bill in his Christmas past…the 1970s. We see Murray (Frank) become more ambitious, money-grubbing and less in love with Claire, his social worker/hippie girlfriend from college. He’s a workaholic, even on Christmas Eve. She suggests they give their relationship a break …

It was 15 years ago and, back at the TV studio, where they are staging a Victorian Christmas Carol, Murray reaffirms his love of the superficial and mocks the still sweet and kind Claire who works with the homeless. But he calls Claire, the love of his life, and asks her to spend time with him this Christmas Eve. He’s afraid to be alone. But Claire is volunteering at the homeless shelter, and Frank is too arrogant to wait until her shift ends. Ba humbug! he shouts at her as he walks out of the shelter.

Ghost of Christmas Present Carol Kane then takes Murray to HIS Bob Cratchet, his Black assistant Grace, whom he treats like crap, never gives her a raise even though she is devoted to him. Grace lives in the ghetto with her gaggle of kids and mother. Her husband was gunned down a few years back. Kane shows Murray the family scene…poor but happy. The tiny boy is mute, has not spoken since his dad was murdered right in front of him. Murray asks the ghost of Christmas Present: Will he ever talk again? Kane whacks him one. 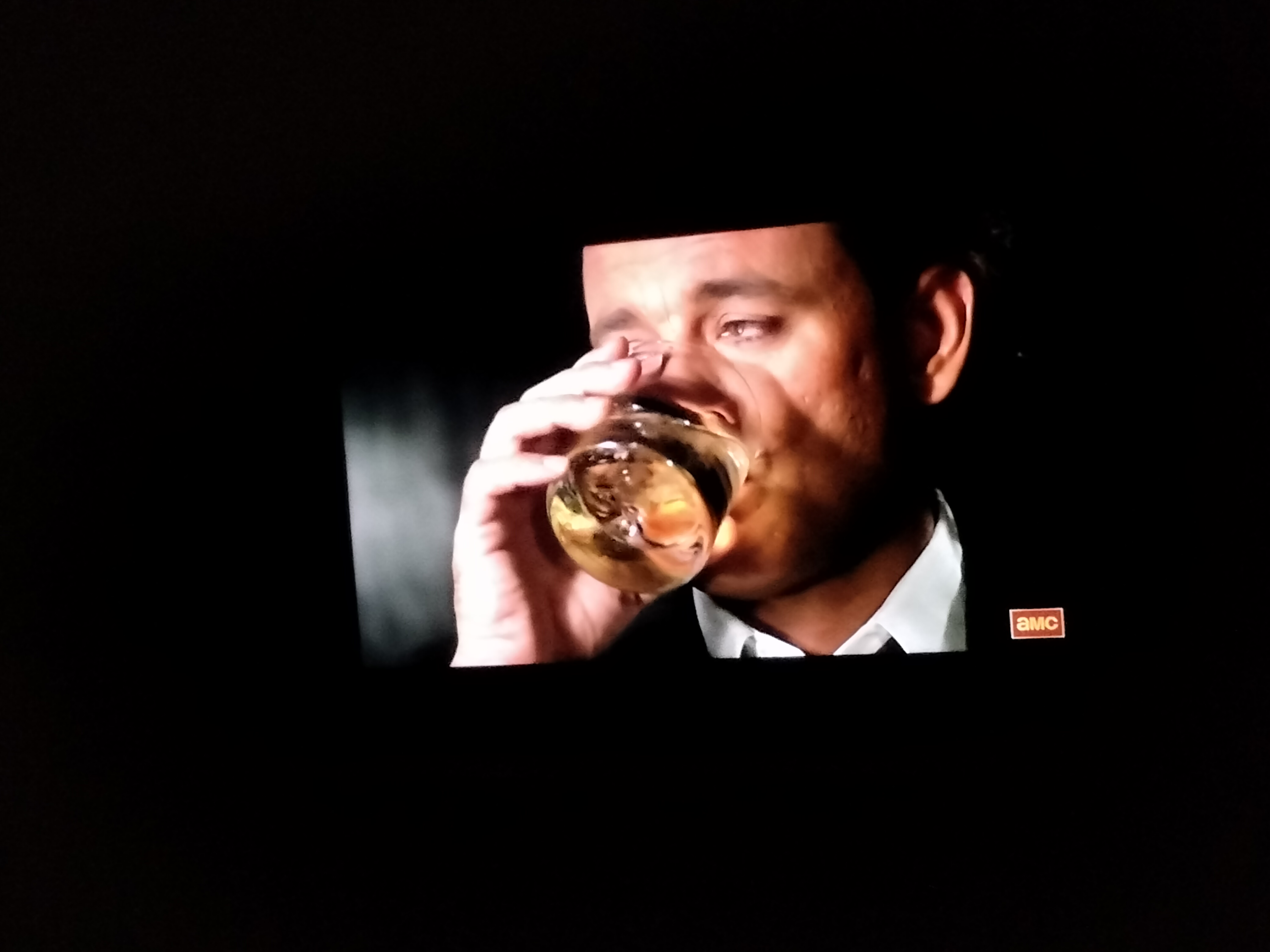 SCROOGED: A miserable Scrooge for the 1980s – Bill Murray.

At his nephew’s Christmas party Frank yells the right answer to the game…but they can’t hear him. He’s a ghost, too. They keep on guessing. … Then he sees the homeless guy he never gives a buck to … he is frozen, dead.

Murray freaks. He wants to leave this Christmas Present…

Back at the TV station, everyone thinks he’s going crazy. Frank is DISTRAUGHT. He is waking up … and terrified at what he is waking up to: his withered soul…his nasty, loveless, cruelty-ridden life.

He’s learning: “MANKIND WAS MY BUSINESS!!!”

I love the Dickens’ quotes in this mid-Manhattan setting! They travel beautifully into the late 20th century movie because Charles Dickens is for all ages. Forever!!♥️♥️♥️

Now Frank meets Christmas Future: the grim reaper, clad in black robe, holding the infamous sycthe. A casket is being shoved into a drawer, a drawer of flames. Murray is in it – and on fire. Beating beating his coffin from the inside he wakes up to him BEATING THE ELEVATOR DOOR TO HIS OFFICE. HE’S ALIVE! IN THE HERE AND NOW! At the TV station. Frank is ECSTATIC He hasn’t missed Christmas!!!

Frank gets on his own tv Christmas special and starts preaching to America: BE CHRISTMAS! He’s telling viewers: WHAT ARE YOU DOING WATCHING TELEVISION ON CHRISTMAS EVE? It’s a televangelist Christmas special now…coast to coast America watches as Frank apologizes to … mankind. And turns a new leaf. He orders champagne for the 250 people on the tv show and throws a Christmas party. The first in years!! He kisses the prettiest gal at the party…but declares his undying love for Claire. He goes out to find his lady love at the homeless shelter.

And that’s what Christmas is all about, Charlie Brown!💚