Thanksgiving 2022 at the Friendly House

Grafton Hill’s Friendly House Community Center on Wall Street was the scene on the three days preceding Thanksgiving for their annual “Turkey Giveaway Program” that dates back to the 1960’s.

In an interview with Mike Moreshead, the Assistant Director, he said that the program initially serves about 500 families whom Friendly House serves on a regular basis, year – round.

On Monday, November 21st, the Turkey Giveaway had three members of the Worcester Railers Hockey Team on hand to pass out turkeys to the Friendly House families.

Moreshead said that the drive this year had been organized by Josephine Delef who oversaw approximately 60 volunteers who gave of their time to make it a successful event.

He said that the turkeys initially come frozen and by the time they are eventually handed over to the families which he estimated takes about four days, altogether, the turkeys are ready to be be cooked.

In addition to the turkeys, they also provide onions, squash, potatoes, stuffing along with cranberry sauce.

Moreshead said that in addition to the turkeys and “all the fixins,” Friendly House also handed out “a gift bag of non- perishable canned vegetables for the next day.”

He estimated that Friendly House recieved about $7,000 in financial donations this year for the Turkey Giveaway.

Moreshead said the first two days were reserved for the Friendly House families and Wednesday was reserved for others in the community whom he said, “may have fallen short in their Thanksgiving grocer⁷:: shopping,”

“There were 150 gift cards for local grocery stores, valued at $20 that were made possible by local businesses,” Moreshead said.

Among the many busisnesses contributing to the Turkey Giveaway were the Worcester County Food Bank, The Wagner Auto Group, TJK, the Willows Retirement Home, and others.

He described the Turkey Giveaway as ” a community effort, with lots of donors.”

“We also partner with churches,” he said.

He said that Friendly House recieved so many donations and he apologized to This Reporter “if he left any businesses out.”

” I am honored and humbled to do this job, year-round,” Moreshead said.

THE QUALITY INN ON ORIOL STREET – THE PERFECT PLACE! 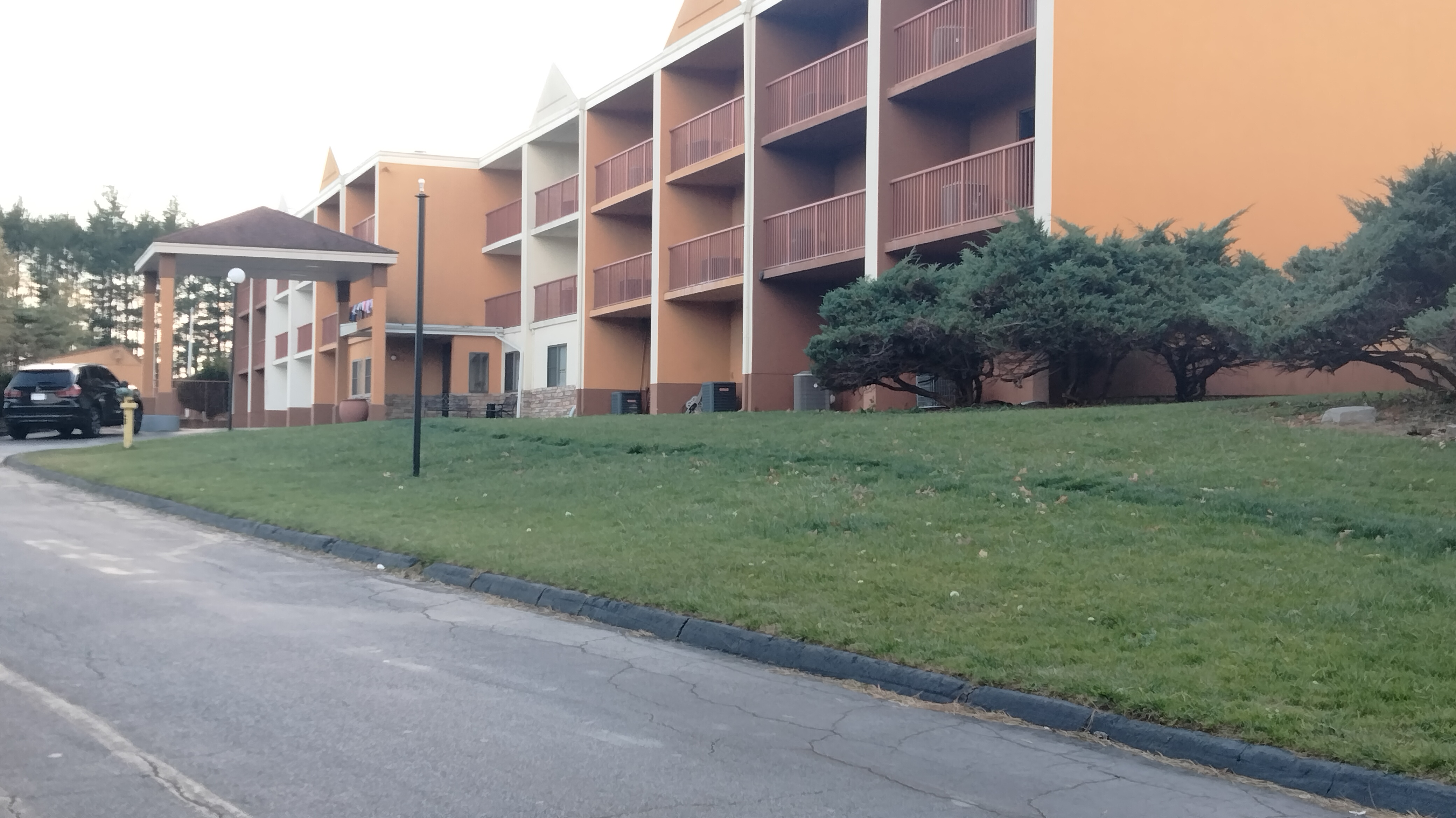 It will be a shame if the NIMBY crowd – homeowners in the Burncoat/upper Lincoln Street area – apply pressure to our weak-kneed politicians and the pols cave and nix the apartments that COMMUNITY HOUSING RESOURCES plans to build for the homeless in the Quality Inn suites/hotel on Oriol Street. Worcester city councilors and planning board members need to drive to the hotel AND SEE THAT THE HOTEL IS AWAY FROM HOMES AND CONDOS – that it is at the top of a street with a methadone clinic and a medical building. IT IS NOT LOCATED IN A RESIDENTIAL NEIGHBORHOOD! What’s more, the Quality Inn is already operating as a huge, quasi-homeless shelter for Worcester. It’s staffed by the hotel’s terrific hospitality professionals who are ANGELS with the regular guests and homeless guests – the struggling kind. I spent, in total, a month+ at the Quality Inn on Oriol Street. The young Jamaican guy at the front desk was wonderful with me and all the guests – home owners from out of town and homeless folks from Worcester and area towns. Assistant manager Dana is a wonderful person – she should be made director of the new housing complex! Community Housing Resources should hire these two smart, sensitive young people to run their new endeavor! And keep the housekeeping staff, too!

You wanna know a secret? Our Worcester city councilors already know the Quality Inn is a kind of homeless shelter. A few City workers have told me: Homeless folks sleep in the bushes outside the motel, Rose. Yes, they do! It’s safe and quiet. When I stayed at the Quality Inn and took my two dogs out to pee late at night before I went to bed, friends of friends who had rooms at the Inn would sneak in for shelter. A night out of the cold or the rain. Rooms were shared by fiancees and cousins twice removed! Everyone looked exhausted and grubby – it’s no fun being homeless – but I never had a problem with anyone there. Not once.

The revamped Quality Inn that will be converted to apartments and studios for the homeless will no longer be a quasi-Worcester homeless shelter – it will be HOME. Home to folks in need. One-bedrooms. Studios. Bathrooms. A community room. It will be an IMPROVEMENT, an ASSET to the city. Fewer people sleeping on the sidewalks of the Canal District!

According to CHR, the reimagined and renovated QI will be supportive housing, meaning there will be staff on the premises 24/7 … to support the residents – to help with job searches…to counsel…to refer folks to other social service agencies that can help. Residents must pay a portion of their rent. There will be security cameras galore, I bet, plus security folks.

RIGHT NOW THE QUALITY INN is excellent but a bit of a free for all. The Worcester Fire Department’s fire trucks are always there – for silly stuff – and for real stuff, including health emergencies.

Let’s stop the suffering. This holiday season let’s get the homeless out of the woods and provide them with home …real homes for the working poor and very poor with little kids. Families. To see little girls and boys homeless, crying outside the Quality Inn as a dad or mom tries to comfort them is soul crushing. I often went to the Dollar Store when I stayed at the Quality Inn to buy the little kids coloring books and crayons, stuffed animals, etc … and I got other toys and books donated. Remember Edith Morgan’s big blessing bag last winter? Pens, pencils, notebooks for school – I tried to help. A heartbreaking sight: a Worcester Public Schools yellow school bus pulling into the Quality Inn … seeing the three our four little children clambering aboard the school bus, with parents looking tentative and hopeful. Doing the right thing for their children, under duress. This is America?! … I’d leave all donations/ school supplies with Dana or another front desk staffer and knew they’d distribute the stuff wisely. And my “pup” Lilac was always so happy to see the kiddos, giving them sloppy kisses whenever their paths crossed! One mom said, You made my daughter’s day! She loves dogs! This was after her daughter patted Jett and Lilac’s old heads and gave Lilac a hug as we walked about outdoors, outside the Quality Inn, our temporary home – we hoped.

Why must innocent children suffer?

Why traumatize little ones in a city whose coffers are full?

Worcester is undergoing gentrification – city-wide! Not just in the Canal District! So many of us have had to find our new homes in the towns outside of Worcester because our city is so expensive to live in. For young families with children in the Worcester Public Schools or the working poor who have jobs in Worcester but no car … they need to live in Worcester! Remain in their hometown! The new Quality Inn could be an answer to their prayers … 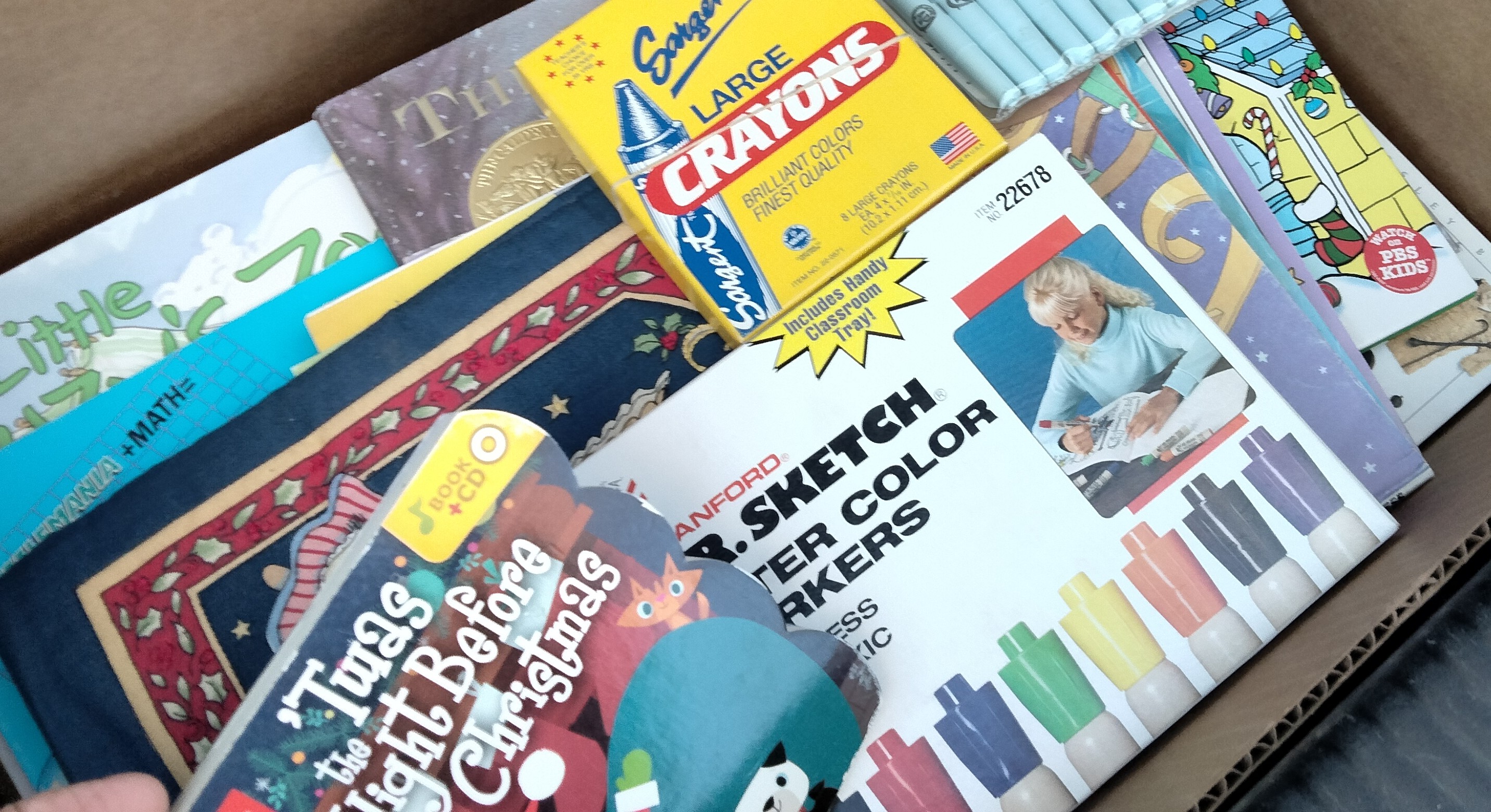 Mr. Monfredo donated a box filled with books and magic markers to the children staying at the Quality Inn.

Retired Worcester Public Schools principal and teacher and former Worcester School Committee member John Monfredo made a blessings box for the little kids at the Quality Inn on Oriol Street. I delivered the box a few days ago to a gracious Javan – the Jamaican front desk manager I told you about. Javan was being Javan – impeccably dressed, professional, polite … coming out of the kitchen area with a huge covered tray. . For the community room. A homemade frosted Bundt cake was already on the buffet table. It was around 3 p.m. I bet Javan and the hotel’s staff created a wonderful Thanksgiving feast for all the Quality Inn guests: out of towners visiting family, those displaced by fire or some other domestic catastrophe … and the homeless! The place settings were beautiful, so festive looking! Javan looked like a prince walking out with the platter … When I gave him the big box containing new/just like new children’s books, crayons and magic markers and told him I was no longer homeless – that I had a beautiful apartment – he smiled. HAPPY THANKSGIVING! we said to each other! The Quality people at the Quality Inn – a hotel that people love to malign because they don’t know any better …