They say when John Lennon was gunned down under the Dakota archway by madman Mark David Chapman who fired four shots into his back, two sailing straight through Lennon, that as the artist/musician collapsed to the pavement, as 80% of his blood gushed out of his aorta, veins and arteries, audio cassettes, the small plastic rectangles of recording tape we all listened to or recorded music on in the ’80s, came tumbling out of Lennon’s pockets and crashed to the pavement with him.

The groups he was listening to at the time (he really liked the B 52s!) and the stuff he was recording with life-mate Yoko Ono.

This past weekend, I could not shake the image: the frail 40-year-old Lennon (he was so skinny, eating all that macrobiotic food!) and his fraile, plastic audio cassettes hitting the cement sidewalk outside his grand home, simultaneously.

Minutes later, at Roosevelt hospital – after the cops said TO HELL WITH THE AMBULANCE! and flung Lennon into the back of their police cruiser to drive him immediately to the ER themselves (he told them: I’VE BEEN SHOT, then went into shock), even after the ER doctors pulled Lennon’s heart out of him and held it, worked feverishly on it, to save him, he died.

Chapman, his madman murderer, who has been denied parole year after year after year because he is hated by the whole world, was carrying THE CATCHER IN THE RYE in his pocket the night he killed Lennon, who was coming home with wife Yoko after making music that night at the recording studio. THE CATCHER IN THE RYE by J.D. Salinger. The maroon paperback we ALL read 20 times as high schhool or college kids – the book we all carried in our bluejeans back pocket! A misfit’s guide to fucking up – and proud of it! The psychotic Chapman made the book his his own, his talisman. He thought he was Holden Caufield! Sick! The slim novel was in his pocket as he stood quietly in the background waiting for the cops to take him away.

The night my mother died at that terrible nursing home near the old Higgins Armory, she was wearing a silly beige kiddy wristwatch I had bought her a few weeks before. Rubber and soft, its big “face” in the shape of a racoon – pointy ears and all! It made her smile and was easy to read, even if her Alzheimers made it hard for her to “tell time.” It made me smile, too – so cute! Just like Ma!

But when she died and the OIF and I went to her shared room at the nursing home to get all her personal belongings, the raccoon wrist watch was gone. Stolen? Lost? Her other dimestore jewelry was in the drawer of her bedside table…her raccoon wristwatch gone.

For some reason this devastated me! I wanted to wear her silly watch. Forever! I pictured a nurse or nurses aide pilfering the adorable time piece – for a grandchild? A nephew or niece? Their own kid?

And so Worcester firefighter Chris Roy died a brutal death fighting flames in some shit slum building (look at those popsickle stick porch rails! look at all that shit toxic vinyl siding slapped over the porches!) in Main South, fighting for the lives of ghetto folks half the city despises, even as he was losing his own …

I wonder: WHAT LITTLE THING, THE MOST IMPORTANT OF ALL!, did Chris have with/on him the day he died?

A metal cross on a sterling silver chain?

A little photo of his kid – or a picture of a woman he loves, once loved?

A ring on his big finger?

Family will want that, anything really, because in death, in leaving for good, people tend to keep/want the stuff that really matters. The precious stuff: things that have nothing to do with dollars – more often cents! It is all memories, unbreakable, unfathomable. I imagine, every day, Yoko rakes John’s music cassettes across her old cheeks…every day I think of that stupid raccoon wristwatch Ma wore at the home … and every day Worcester firefighters, especially the ones who called into the flame-engulfed windows of that inner-city shit hole: CHRIS! CHRIS! MAN! – already knowing that their mate was unconscious (it’s the smoke that kills) – will hold a pin, ring, medal, badge … and hurt. 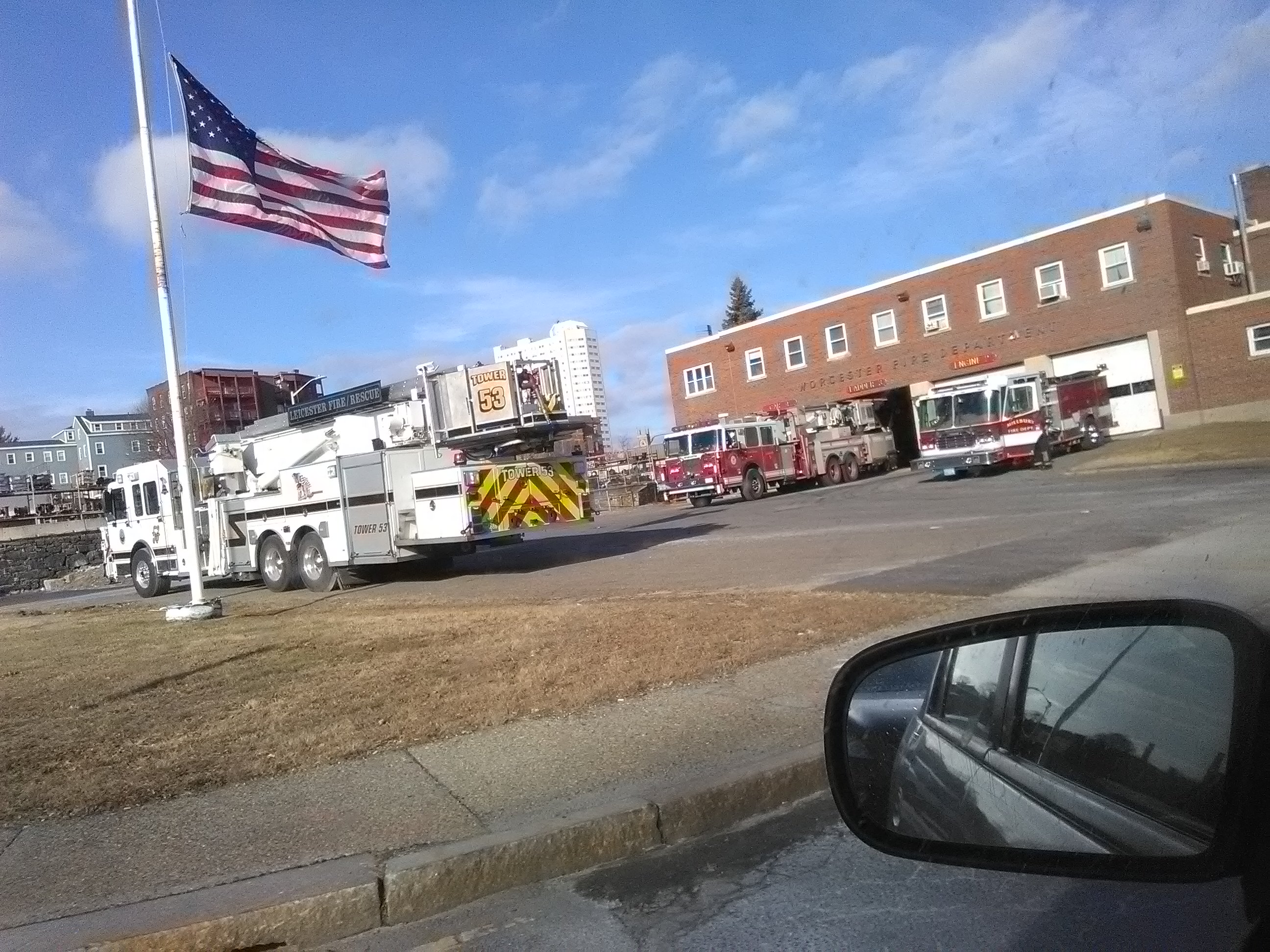 The “Green Island fire station”: American flag at half mast; white Leicester fire truck, its guys hoping to ease their brothers’ pain/help out in any way they can, parked beneath our flag. photo: R.T.