You know our country is going to he*l when you go to AutoZone for some motor oil and the Latino kid – really about a young MAN about 20 years old – is in the parking lot next to you, standing before his beautiful new sports car and blabbing on his terrific smart phone and DEMANDING the AutoZone counter kid “POP OPEN MY HOOD” AND FIND HIS MOTOR OIL hole and “OPEN IT” and pour the motor oil in. I looked at this dipstick, dumbstruck. I thought every red blooded American boy knew how to pop open his car hood … and add motor oil. Plus read dipsticks, change a flat tire, maybe change oil. In the 1950s and ’60s every Dad taught his son to drive and basic car maintenance. My late father could take a car apart and put it back together. He had a junky truck which he loved working on, usually with his junkyard German shepherd dog lying a few yards away, snoozing in the shade. When and if he came home, he entered our Lafayette Street apartment with grease on his white tee shirt and his hands black. He used to buy this special grainy soap to wash his hands clean. I tried it once. It hurt my hands it was so gritty!

All WW II guys loved playing under the hood. For hours. When I was a kid most of my boy cousins were into cars and fixing them – adding all kinds of bells and whistles like exhaust pipes that roared or shiny new hub caps for car wheels. There was always a bottle of Armoral hub cap cleaner and buckets of soap bubbles and hoses to wash their babies down. Often they had white bucket seats in front. And stick shifts. At Providence Street Junior High we had a Car Club – open to boys and girls, ninth graders only. Mr. Chiras taught the class in the school parking lot, using his station wagon as the classroom. My friend Ann joined the club, along with a ton of boys and girls – some of whom already knew how to drive. In Car Club Ann learned how a car worked, how to charge a car battery, how to change the car’s oil, how to jack up the car and remove a tire and put on the spare tire. She was 13 1/2. 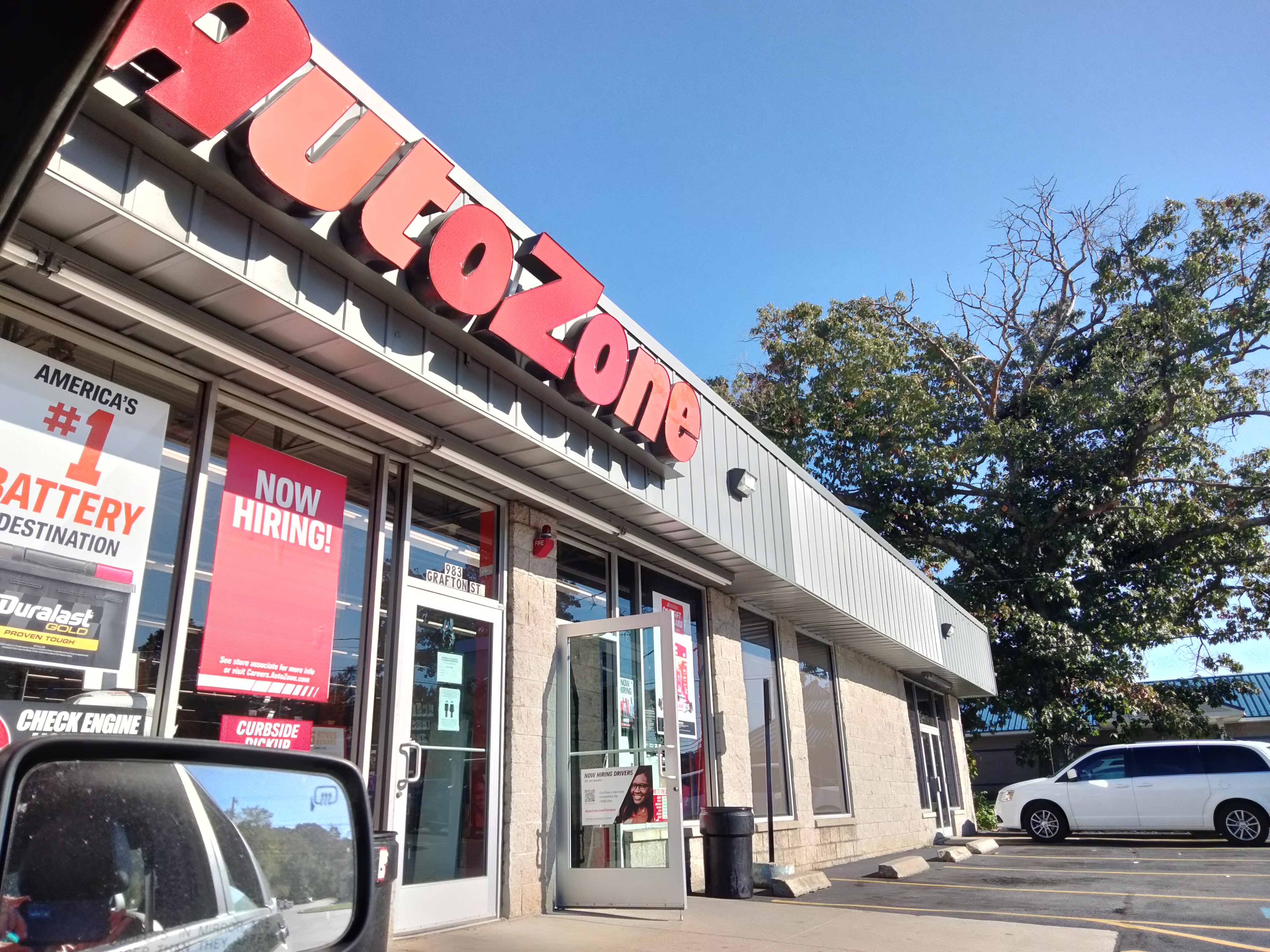 The was all below the ignorant kid standing by me at AutoZone. A Latino fella who did not even watch when the AutoZone staffer, another Latino kid who KNEW about cars, did his dirty work for him. I watched the kid play on his phone. At 60 I feel I know enough about life to opine in public. The old broad looked at the kid and said: You know when I was your age EVERY YOUNG MAN KNEW HOW TO OPEN THE HOOD AND POUR HIS OWN MOTOR OIL. WATCH HIM AND LEARN. … DIDN’T YOUR FATHER TEACH YOU HIW TO DO THESE THINGS?

The kid looked at me and said: NO. I’M ALL ALONE. By myself.

I said, half believing him: “Yep. That’s the problem these days.” Then I added, disgusted: THIS COUNTRY IS REALLY FU*KED UP. Then I walked into AutoZone and asked the other kid, Tom, pictured here… 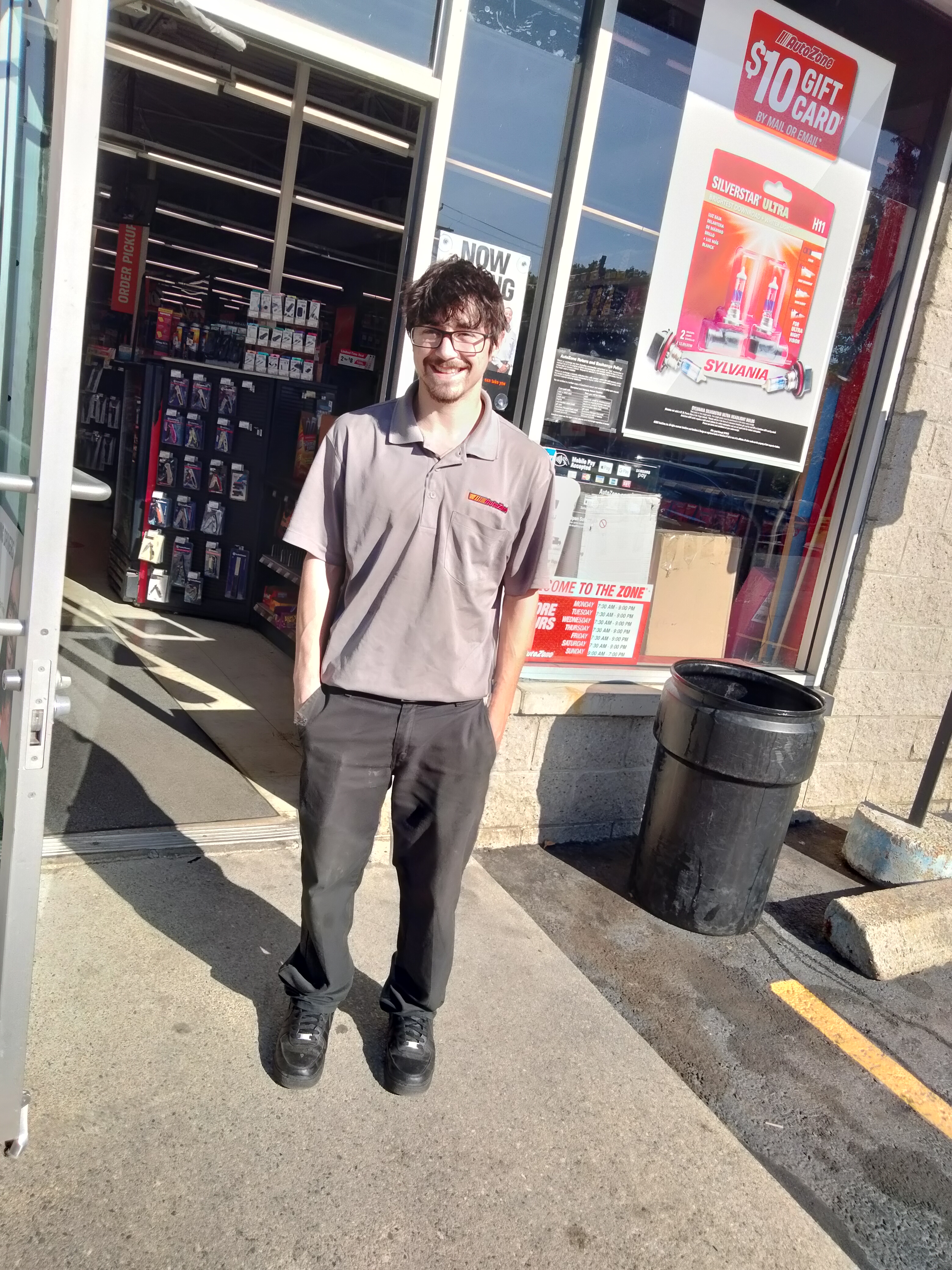 … to help me out. I said: meet my new jalopy. Always able to do for myself but I can’t open the hood! …Tom got my motor oil, walked out of the store into the AutoZone parking lot, showed me where to place my fingers, popped the hood and read the oil dipstick. I decided one quart of motor oil would be good and Tom was nice enough to pour the oil in, then screw the cap, then read the dipstick again, then wipe my motor oil bottle clean and then he proceeded, with his white work cloth, to wipe off the oil that missed the hole and had spilled on my engine. I didn’t want a funnel. Late for an appointment. He smiled as he gave me my oil back. He went on to help the next customer in the same knowledgeable, courteous way. I was dumbstruck: Tom was the exact opposite of the other kid. He was respectful, nice, smart, hardworking. The kid with the new car and phone did not have a smidgen of dirt on him. He looked down on Tom and the others – just servants in dirty brown uniforms.
Tom looked like a young working man. Tom was my hero. Of course America doesn’t reward a smart professional kid just starting out: he was most likely making minimum wage …not a $15 living wage. He was scrawny and looked underfed. I wonder if he even owned a car…and what make and year? Tom … 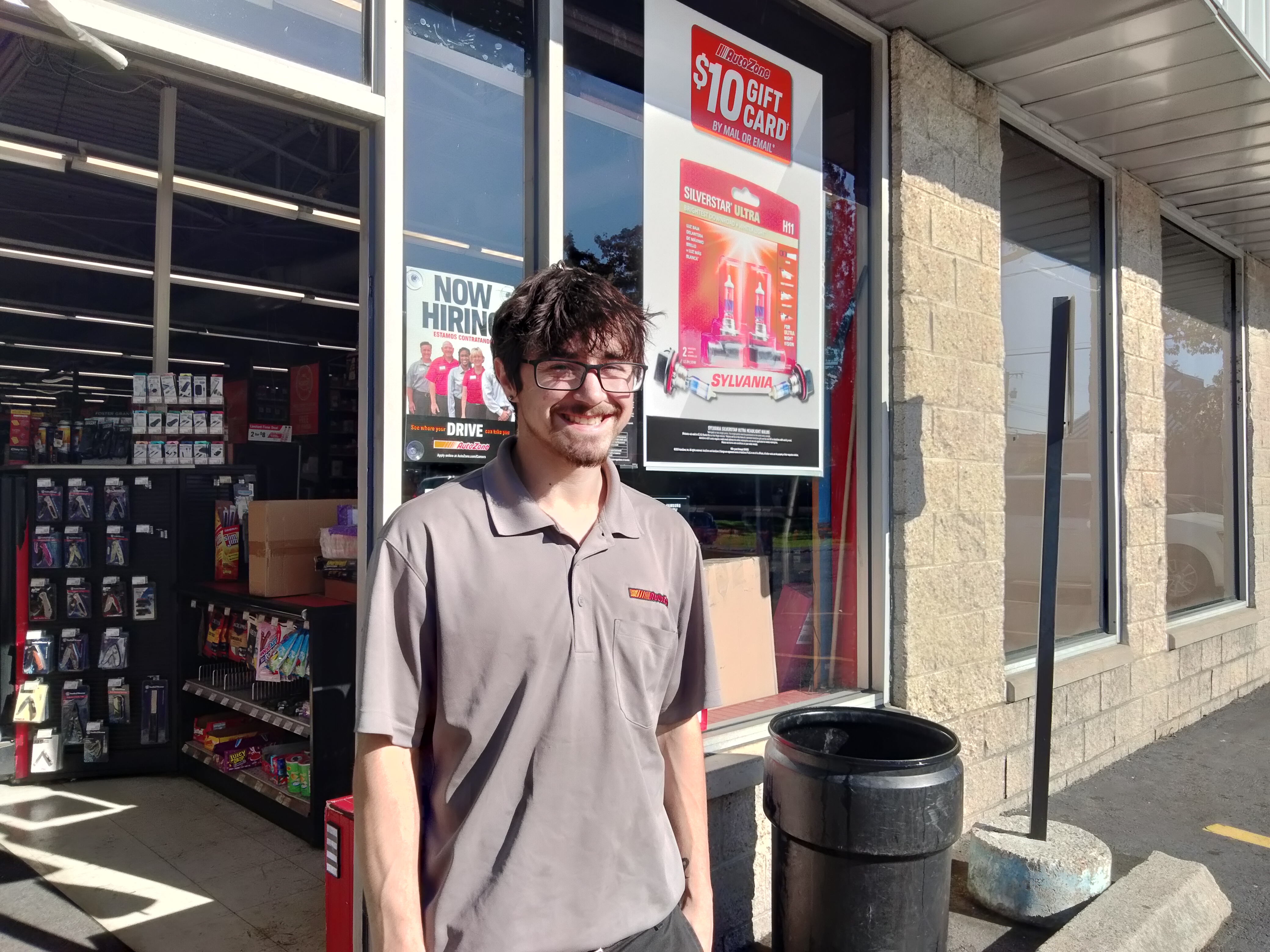 I guessed the entitled Latino kid was being kept by a girlfriend. Or maybe still living with his mother.

I thanked Tom and got into my car, angry. American society, our economy, should reward a Tom. Instead he is exploited. Instead…NO FREE COMMUNITY COLLEGE WHERE HE COULD TAKE SOME BUSINESS CLASSES OR LEARN MORE AUTO BODY REPAIR. Or earn his associates degree in a subject he really loves. Nope. The Republicans killed that part of the Biden Bill, as did Joe Manchin, a senator from COAL COUNTRY WHERE THERE ARE A MILLION TOMS.

I drove away upset and ashamed of our country, our families, our disdain for the next generation, if it’s poor …

So I stopped the car. Got out a card and long envelope. Wrote: THANK YOU TOM FOR BEING SO KNOWLEDGEABLE AND PROFESSIONAL. – Rose

I put a $10 bill in the card, stuck it in the envelope, sealed the envelope and drove back to the Grafton Street AutoZone where I found Tom with a customer, squatting before a shelf looking for the right brake fluid for the person. I gave him the envelope. THANK YOU, Tom! I said as I handed him his tip. It was so little but the least I could do.

President Joe Biden and Congress must help kids like Tom better their lives through education. Community College for free. Usually it’s the only way up in the world for the Toms in our lives. THEY DESERVE IT.