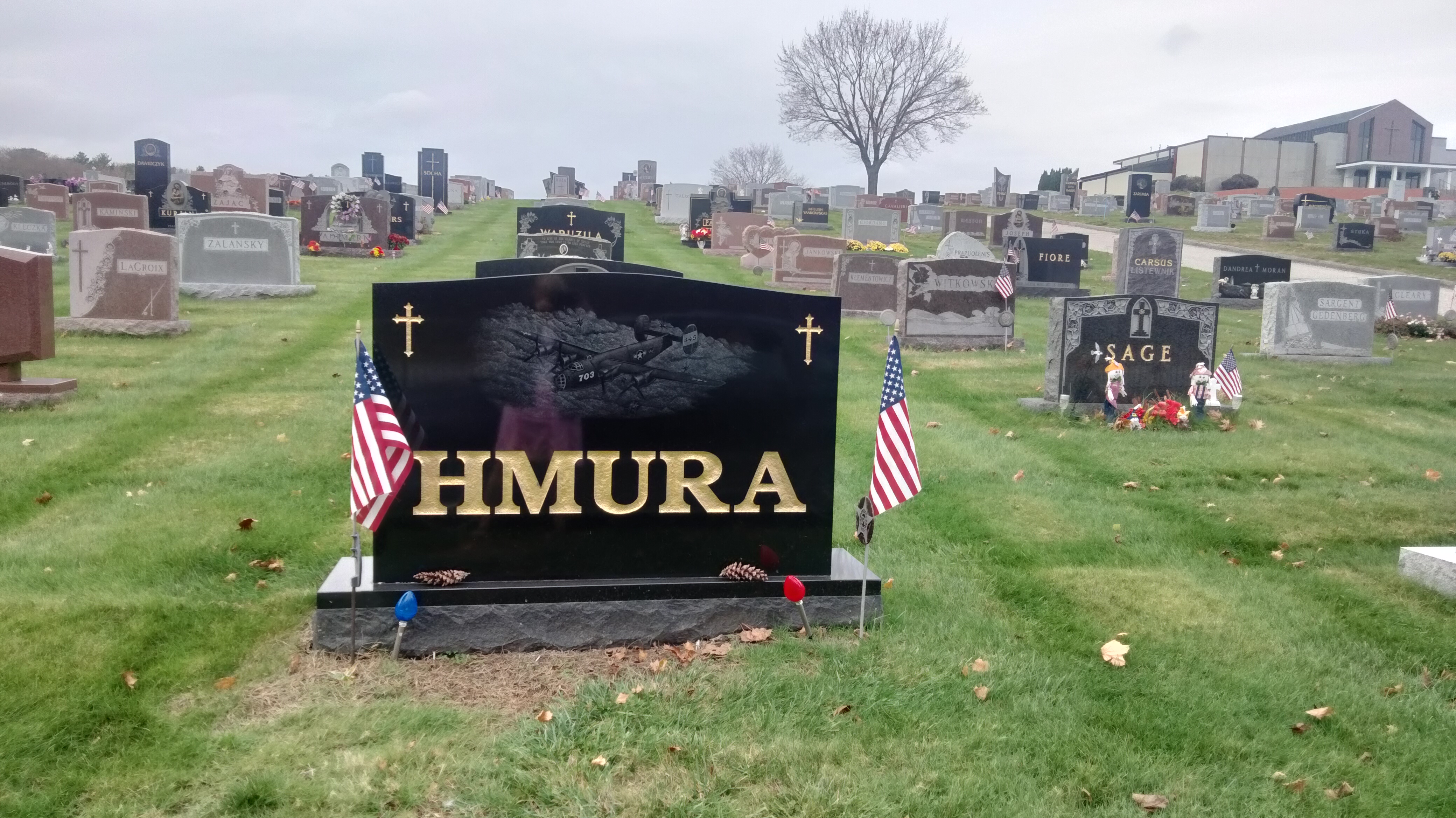 I visited my old pal Tony Hmura this afternoon. He has been dead for several years now, living longer than most old people – eating very little for years because he read somewhere that being very underweight increased your longevity. Swore by fresh cherries and cod liver oil as cures for his arthritis. Voted Republican every election cycle to save his hard earned cash but let all the Democrats running for office in Worcester stick their political signs all over his property… He delved into weird conspiracy theories about who and what wanted to take over America. A little scary. … Despite all that, Tony Hmura was my good friend. Sometimes a great one – for 15+ years. Tony had a lot of common sense and was easy to talk to and didn’t try to change you. When the going got rough, I found myself at Breens bar on Cambridge Street gulping down spoonfuls of their delicious homemade soup or munching on a grilled cheese sandwich – bowl of soup and sandwich courtesy of Tony, who sat at the bar with me and nursed a beer.

Worcester County is a quieter, less controversial and less fun city (for me, at least) now that my pal is no longer walking – with a bit of a hitch – this earth. Canterbury and Cambridge streets were Tony’s world. He loved his sign shop, Leader Sign, located on Canterbury Street, and he loved going to Breens after work or the Webster House. He loved getting all kinds of visitors – feral cats, which he fed… drug addicts, whom he always gave a fiver to … women on the cusp, whom he took under his wing and gave $20 bills to…at his shop. He took one neighborhood lady to his grandson’s birthday party in the suburbs one summer. With 30 guests milling around, she still managed to steal $500 bucks. Tony’s sons were livid. Tony felt she wouldn’t have stolen the cash if she didn’t need it. Tony felt bad for the women who prostituted themselves for drug money. Once he told me about the woman across the street from his sign shop who gave a guy a blow job on his porch…They’re sitting on his porch, afterwards, watching the pigeons. She says, “Pigeons are such dirty birds.” The guy cracks a beer bottle over her head. 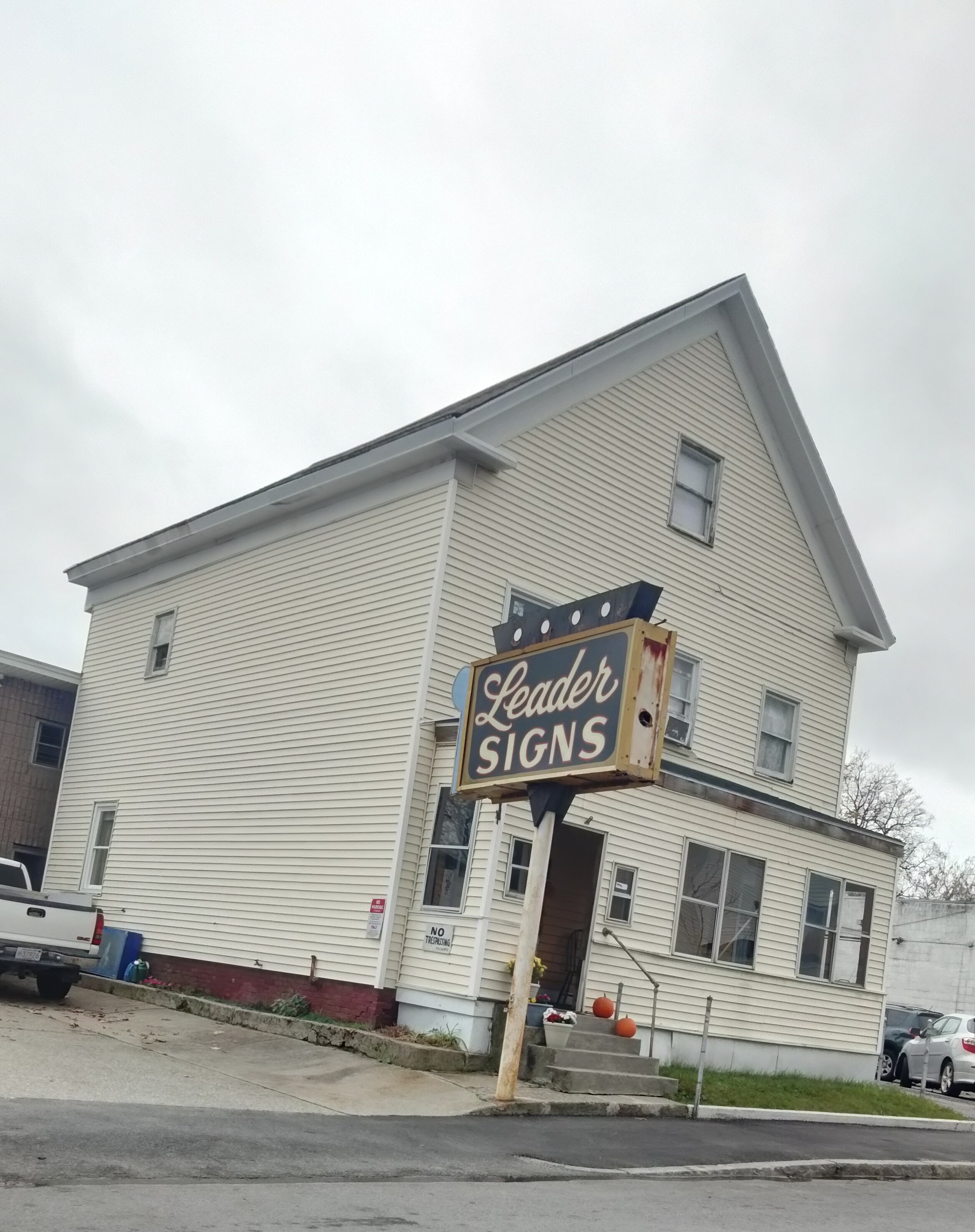 Tony saw the ugliness of city life, but he went back at trying to make things better in Worcester every single morning. He was at his sign shop by 8 a.m., Monday thru Saturday, even when he was in his 90s. Tony talked with everyone, heard and reacted to their hard luck stories. A social worker without the degree but following his misguided heart. He felt addicts would always be addicts – so why lecture them? Just give them the dough. For their booze or their drugs. Tony had a line of alcoholics and more waiting for him at Leader Sign every morning. After he died, they all went away.

Tony was born on Lafayette Street in Green Island and, because his Polish immigrant dad had a nervous breakdown and became incapacitated (was in his bedroom all day) when Tony was very young, Tony never had the dad he had hoped for. Tony began working to support the family when he was 7. He started an earthworm business and went around Green Island selling earthworms out of his little red wagon to guys who were going fishing. Tony got a full-time factory job while still in junior high school. He gave his money to his mother for bills – and saved the rest. He was the sole provider for his mother, father, two sisters and brother. They were very poor, but Tony was growing his bank account. Tony got very tough – boxing, running – and cynical – his life was pretty crumby – and at such an early age. He deflowered many a neighborhood girl who needed money during the Great Depression. He had no problem paying them. He even worked for a veterinarian as a vet tech – no anesthesia for the dogs they castrated!

After the war, Tony became a Worcester sign maker and owned his own shop on Canterbury Street for decades. A proud Polish American – first generation – Tony fell for the glamor of America in a big way: he loved Hollywood movies, Frank Sinatra, Ava Gardner, pop songs, JFK, FREEDOM. Tony was obsessed with freedom – freedom from nagging wives, freedom from his own kids, even. He loved going out and driving and being unencumbered by family and responsibilities of the heart … he loved the ladies, night life, clubs and restaurants … and money. Like most Americans, Tony believed that with the right amount of cash, he could get exactly what he wanted – fancy wrist watches and suits, fancy trips to Florida, fancy ladies … yet he never seemed happy. 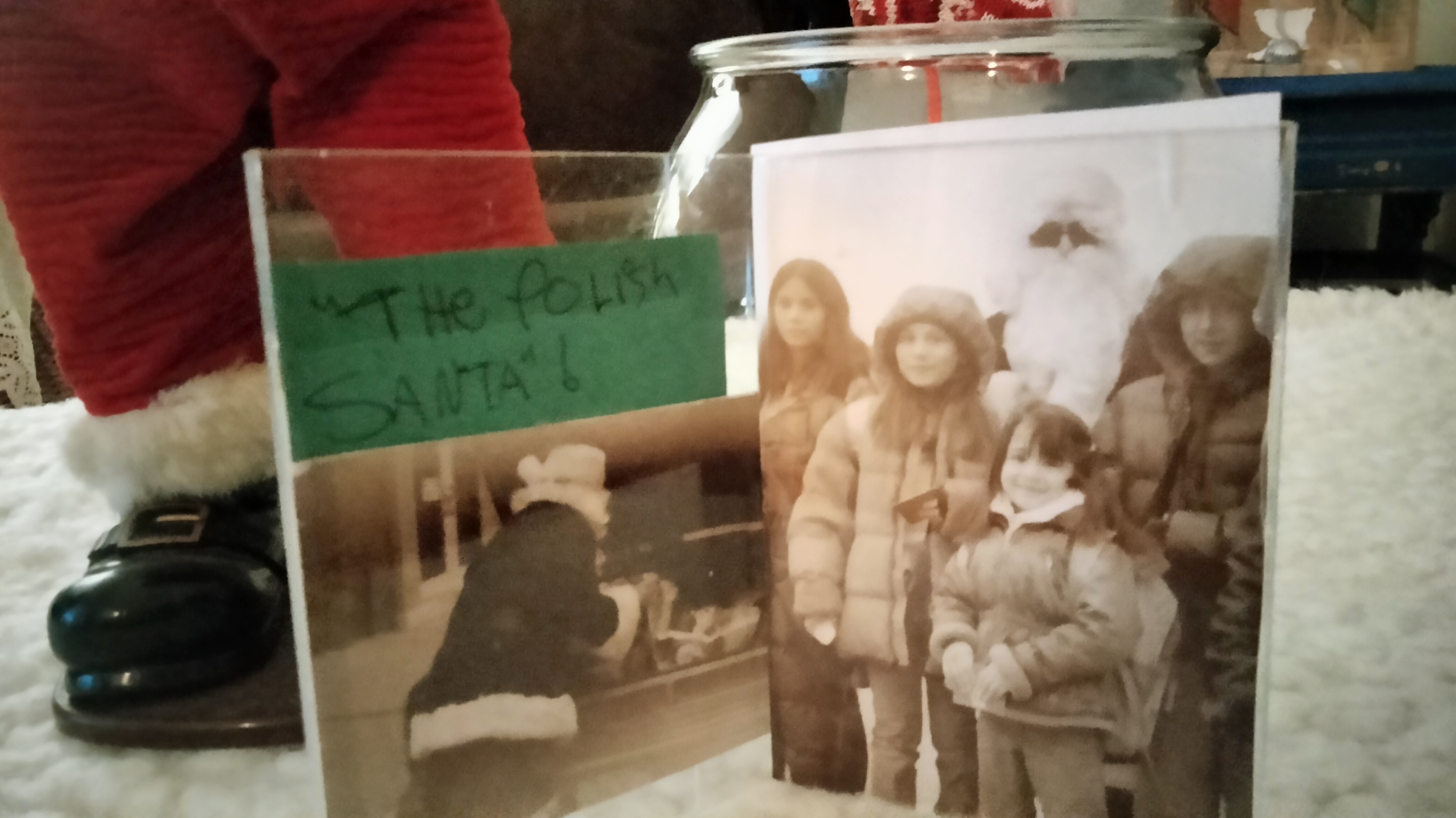 There was his lovable side: Every Christmas, year after year, Tony dressed up as the anonymous “Polish Santa,” giving out little gifts to neighborhood kids or classrooms of kids at St. Mary’s elementary school on Richland Street. He would give waitresses at various dives $50 bills – and be happy with their hugs of thanks. Occasionally, his good deeds went … punished, like the time he bought 30 Christmas turkeys and tried to give them to a local social service agency – and they didn’t want Tony’s turkeys. And Tony didn’t know what to do with them. Or the time Tony went to a City of Worcester elementary school as the Polish Santa with his sack of toys for a classroom of students, many underprivileged – and the school rejected the Polish Santa’s presents for the kids because two students in the classroom were Johovah Witnesses. This enraged Tony! Every Christmas he’d tell me the story and wonder what America was coming to. A stupid, Christmas-loathing country, that’s what! “Drill holes in their heads! Sawdust will pour out!” he’d say to me of his fellow Americans. 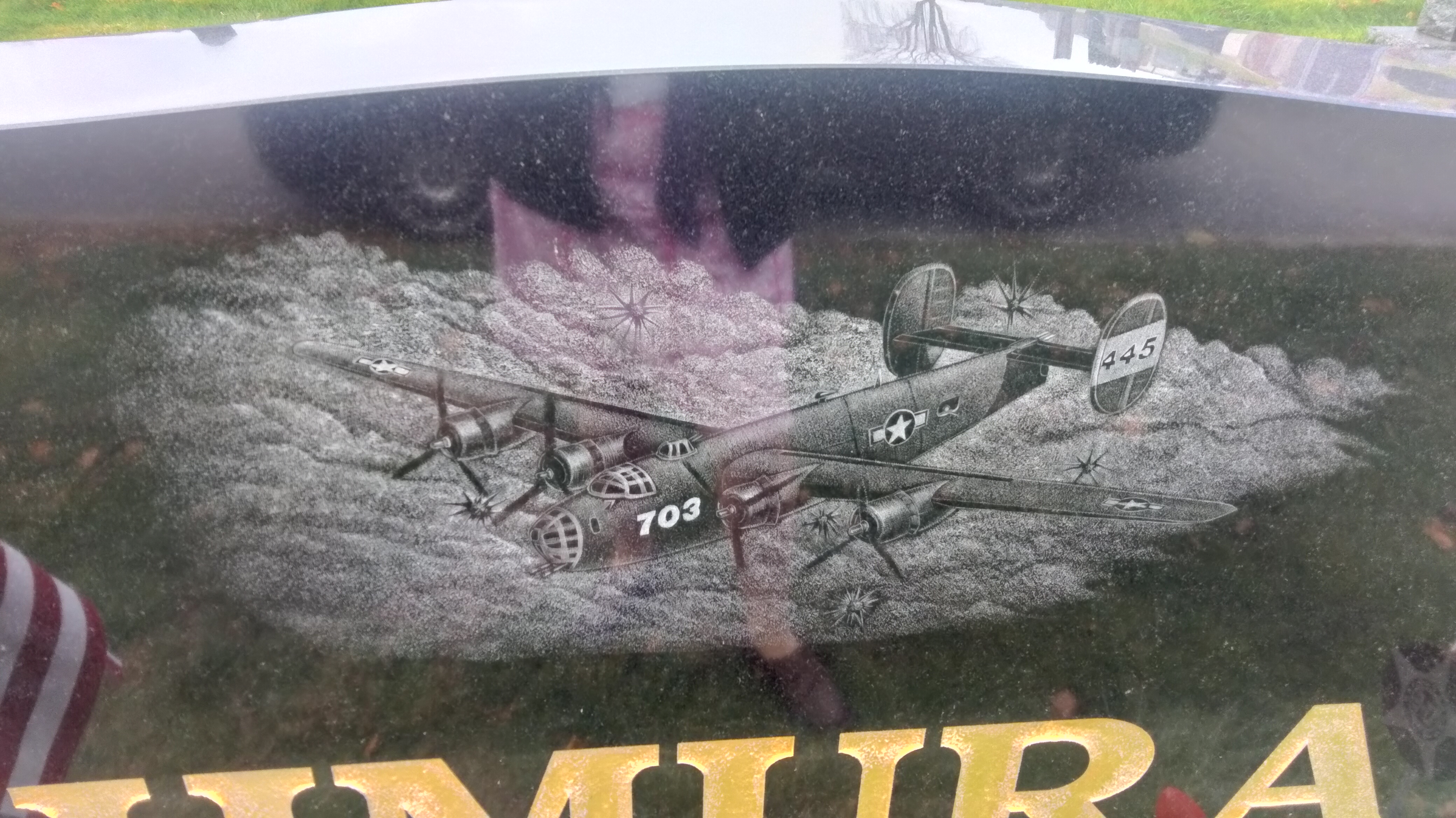 Tony’s final sign: his tombstone. Tony picked it out, paid for it, designed it, had it erected several years before he died. Here’s his WW II bomber plane – Tony was a gunner.

You can see him spraying bullets at the enemy in this detail: 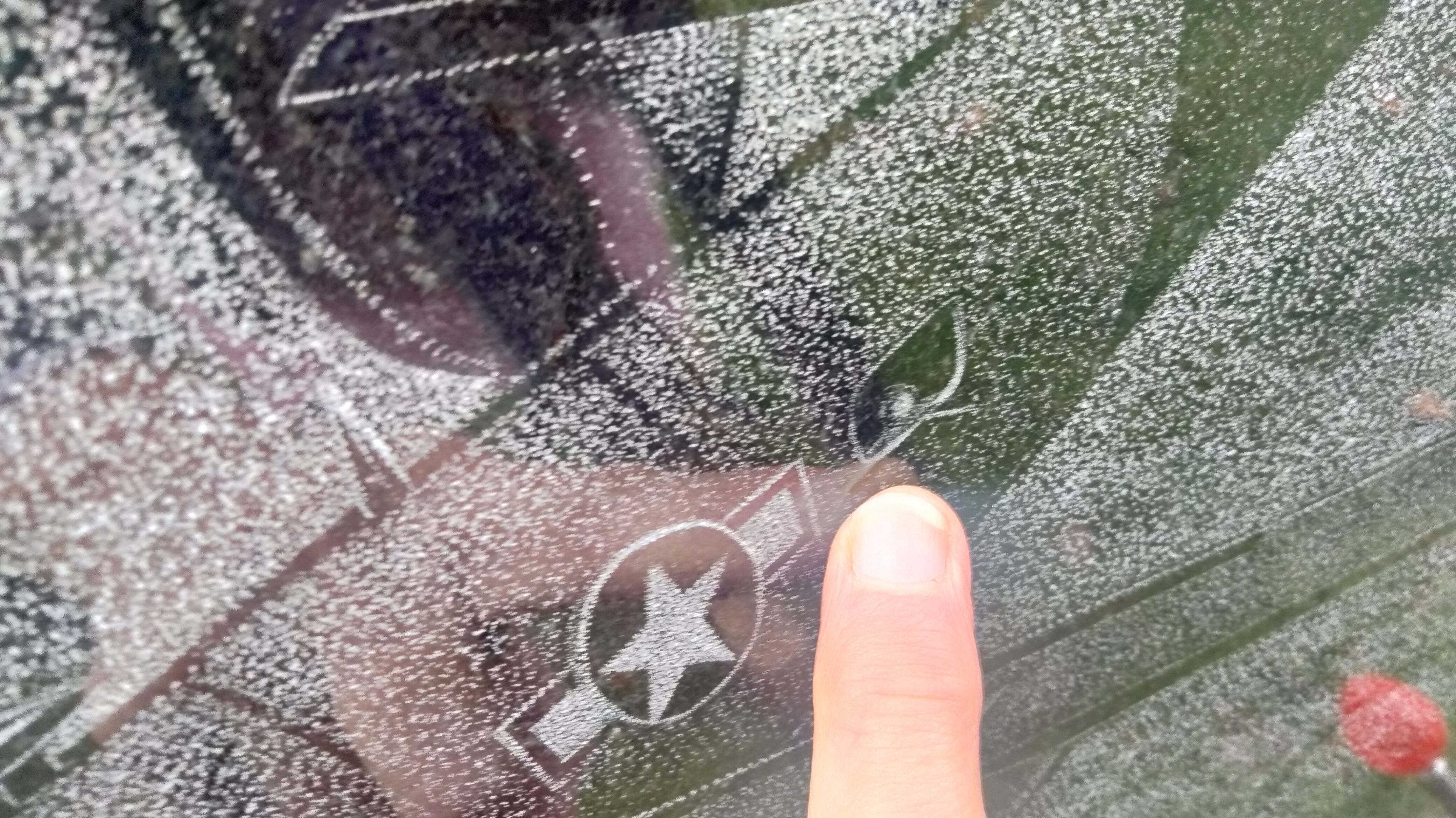 Tony proudly fought for America during World War II – not so much hating Hitler as wanting to prove his manhood, his toughness…to be a HERO. He was about 18 when he enlisted and was up for the adventure of a lifetime. Turned out it wasn’t that way at all – Tony’s plane was shot down a few times, and he thought he was going to die. Some of his pals died – crying for their mothers. After a bombing raid they’d be cigs laid out on the guys’ cots – and shots of hard liquor. Guys’ hands would be shaking as they put their cigarettes to their mouths, Tony used to tell me. But Tony refrained – he felt smoking and drinking were signs of weakness. Years later, I believed Tony suffered from PTSD, from the war. Once a week, without fail, he’d go to a local support group for vets. He never told me what anybody talked about – but I know this support group made Tony feel better.

During the war, Tony and bomber plane mates were led by Hollywood film actor James Stewart. Tony liked Stewart – “He was a regular guy” … “He told us Ginger Rogers was the best piece of ass he ever had.” I loved the Clark Gable stories too… loved the photo of Jimmy Stewart and his crew – Tony included – standing in front of one of their bomber planes, some wearing bomber jackets, Stewart looking like a movie star, all of them young and a bit cocky. All of them smiling easy-going smiles, their jaws relaxed, their arms casually draped over each other’s shoulders. Tony isn’t hugging anybody and you can see the fearlessness in his eyes – he was a loner even back then. But you can tell he’s glad to be with his mates, a Green Island kid fighting for his country. America!

Stop by Leader Sign and see this terrific photo that Tony framed and hung on the wall in his sign shop so many years ago. His son, Bryan, still works there, part-time. He’d be glad to show it to you.