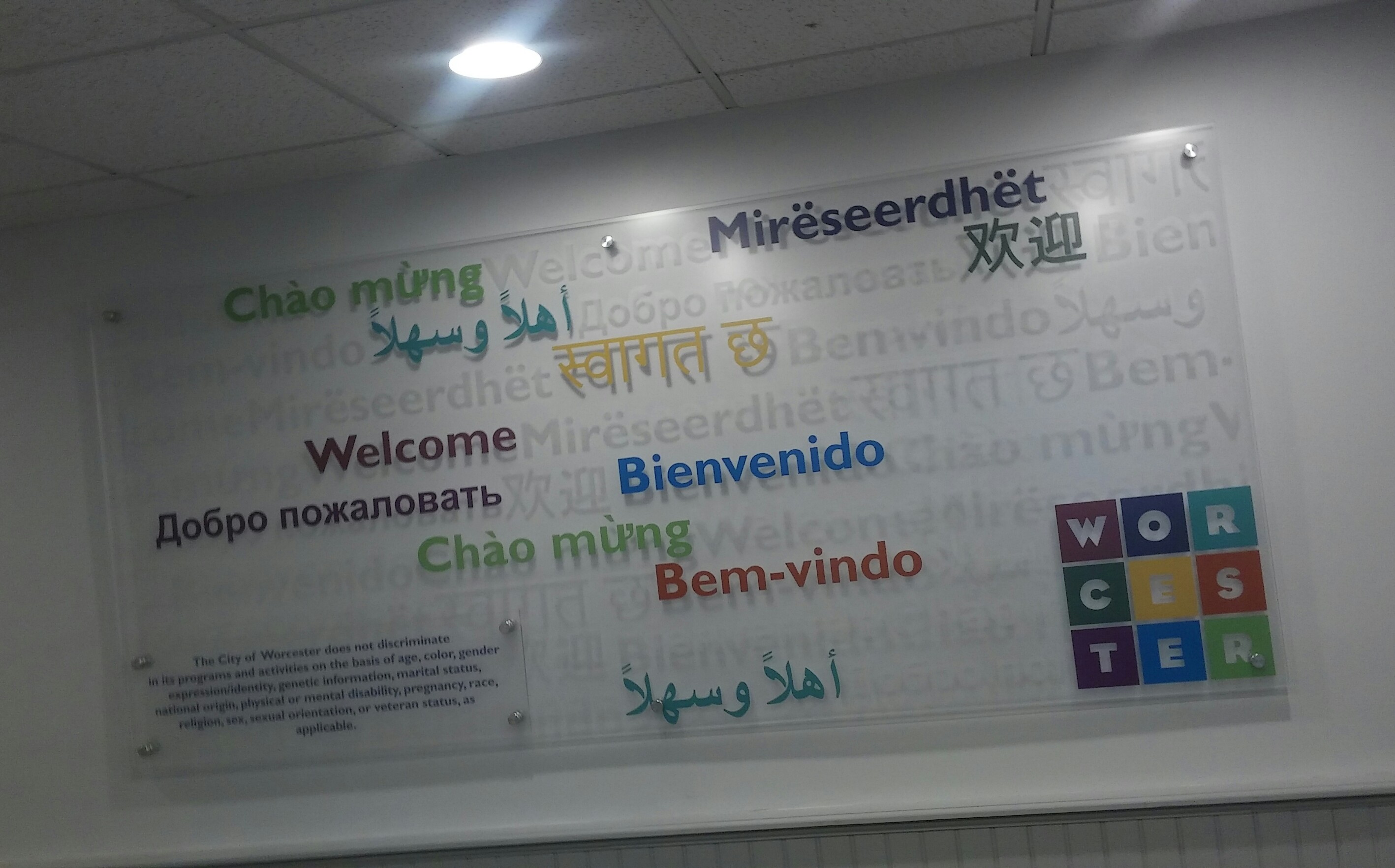 You see this big sign when you enter Worcester City Hall from the city parking garage. It WELCOMES ALL TO WORCESTER! photo: R. Tirella

Take City Councilor Michael Gaffney (PLEASE!). Has there ever been such a dangerous Worcester City Councilor? Such a loathsome opportunist, cynic, headline-grabber and power-snatcher posing as a city “leader”? A demagogue lurking beneath a friendly, penguin-emblazoned sweat-shirt, force smiling that weird, serpentine smile of his and doing all sorts of nefarious things to my beloved city? Worcester’s  own snake in the grass!

And to overthrow the Democrats who, for the most part, have run this city for decades.

Gaffney wants a Republican-lead Worcester and he, already the head of the city’s Republican committee. wants to be crowned her king.

Screw the  fairly progressive Democratic Gateway City we all live in and pretty much love. Welcome to carnage-strewn Trumpland! Welcome to Gaffney shitsville where people, especially minorities, are thrown under the bus daily.

If we aren’t smart and vigilant, Gaffney – with the help of his friend and personal public relations machine, the racist, classist Aidan Kearney of Jefferson, the evil voice of the hate-spewing Turtle Boy blog  – could become our next mayor! Think I’m kidding? Worcesterites are getting used to Gaffney’s creepy, slippery ways. And he’s smart: people often don’t realize he’s playing them, playing on their deepest prejudices when he decides to run hard with a (wedge) issue on the City Council floor and wants their support. Or when he conflates two issues and ends up scapegoating a minority group. Or when he just fucks with our heads, sowing racial intolerance and chaos.

Forget about leading a  complex, diverse, very cool Gateway City! Gaffney is all about hatred.

Gaffney, a relative newbie to the Worcester City Council, is the exact kind of morally bankrupt asshole you’d expect to be vomited up during these toxic Trump times! His ideas, his speeches, even his supporters are all taken from the Donald Trump playbook. Our insane PRESIDENT😰😫😫 has made it ok for politicians like Gaffney to behave in racist, divisive, bigoted ways. Trump has, perversely, validated their un-American-ness! Because he’s the biggest fascist!

So Gaffney throws a bomb on to the City Council floor every other week!

He traumatizes the City of Worcester with his red herrings for mere political gain and to weaken the city’s present power structure. Gaffney’ll pounce on any issue – or create one – that he thinks will hurt our mayor, Joe Petty, and make him (Gaffney) the hero. Gaffney will say anything or float any nutty, racially explosive idea to gain the upper hand. Usually it’s one that is somehow connected to vulnerable subsets of our people – for example: the minority-run Mosaic Group or City Councilor Sarai Rivera and her property. Gaffney beat those issues and people to death. He was able to be so merciless because both issues’ main players were people of color. And there are lots of bigots in this town (all Turtle Boy readers) who cheered him on!

Now we’ve got the latest Gaffney-manufactured shit-storm, another racial and ethnic hornets nest, with our weakest brothers and sisters (many children) at its heart: Next city council meeting City Councilor Michael Gaffney is ASKING THE MAYOR AND CITY COUNCIL TO WEIGH IN ON SANCTUARY CITIES. TO, IN A VERY PUBLIC WAY, DECLARE THAT WORCESTER IS OR IS NOT A SANCTUARY CITY. Gaffney is demanding that his City Council colleagues  sign on to – or not! – the anti-Sanctuary City resolution he has so craftily crafted!

What garbage. What bull shit. What a way to make the City Council fritter away the city’s time! This has nothing to do with making Woo a better city! Gaffney has set up this situation up so he can WIN POLITICAL POINTS – and he wins either way!

He hurts Mayor Joe Petty and the Dem power structure in town no matter how the council votes. Just bringing this shit resolution on the council floor opens the floodgates to race baiting, group-hating and soul-sapping arguments between Woo residents and among Woo City council members. Rotten words and hurt feelings will rule the day as we rue the day!

Gaffney does not give a fig that he teases out all kinds of racist feelings in our community,  exploits people’s deepest prejudices and obfuscates the real issues.

He willfully chooses to make things murky! He uses people. He keeps Worcesterites from understanding each other and learning the truth about each other!

On Gaffney’s watch there is no bending that arc towards justice! Just more hatred in hate-filled times.

So, this is what the Gaffer’s true intentions are:

1. To get the mayor and city council to say: YES, we’re a SANCTUARY CITY.

2. To get the mayor and city council to say: NO, we’re not a SANCTUARY CITY.

If they go with #1 they make all their constituents happy and do the right thing, but the City, thanks to President Trump, loses millions of dollars (except for cops) in federal funding. Also: the more conservative folks in Worcester, plus all our racists and bigots, will hate them and try to vote them out of office in November.

If they go with #2, their constituents and supporters will be devastated and Worcester’s most vulnerable folks will be scapegoated, sent back to violent lands, torn apart. They will be broken-up and broken-hearted. We’ll get the federal monies, but we’ll lose a good chunk of our collective soul.

In the meantime,  a crazy, evil, confused and confusing debate swallows up our city.

Thanks to City Councilor and mayoral candidate Michael Gaffney.

For Gaffney to create this kind of civic havoc is wrong.

For him to create a scenario, under the guise of his stupid SANCTUARY CITY RESOLUTION, divides folks. It pits one group of people against another, magnifies our slight differences and attempts to erase our shared humanity.

As we say here in lower Vernon Hill: Michael Gaffney’s a PIECE OF SHIT.