Yesterday I stumbled upon a paperback and decided to keep its arresting cover. I tore away its yellowed pages and chucked them into the recycling bag. 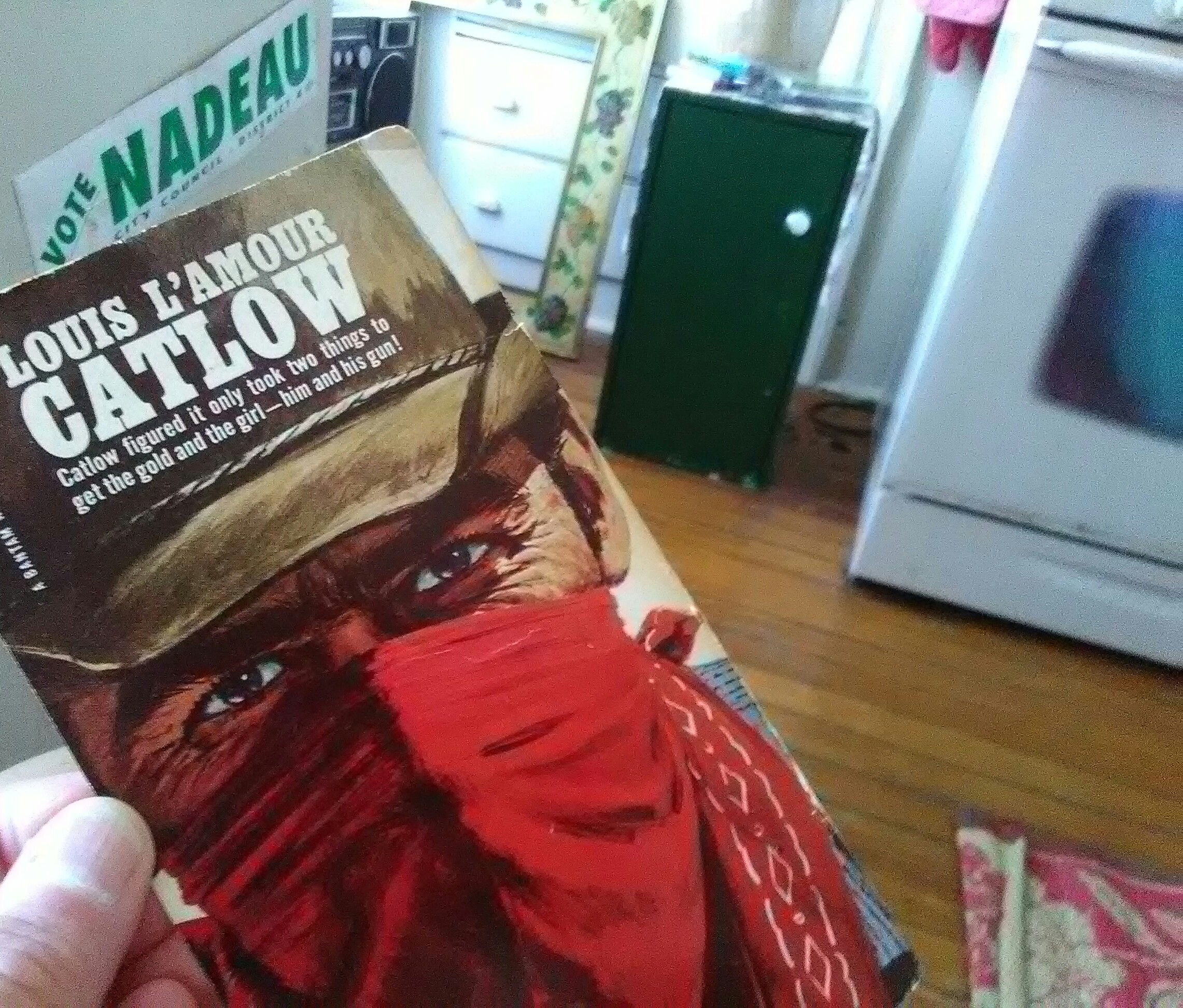 I lovingly(!) trimmed the front cover’s edges and, on Fourth of July weekend – America’s birthday weekend – stared, mesmerized, at that rugged face.

What was the attraction??

Everything. He was/is America: sex, money, guns, movement, freedom. That’s us, still, in a nutshell.

The book’s title, CATLOW, has a subhead that says it all: “CATLOW FIGURED IT ONLY TOOK TWO THINGS TO GET THE GOLD AND THE GIRL – HIM AND HIS GUN!”

The book cover also got me thinking of my Polish immigrant grandfather, Jadju, and his obsession with television Westerns…

There I am sitting on my Jadju’s lap in Green Island, a toddler, enveloped in his cigarette smoke watching all those great, sometimes corn ball, TV cowboy shows. Jadju was a chain-smoker and rolled his own cigarettes, unfiltered! While he smoked, he held me on his knee and together we watched Rawhide – both of us fascinated by the guns, the galloping horses, the saloon gals … the majestic American West. … Sometimes there’d be an old John Ford classic on… Stage Coach, starring a young John Wayne, She Wore a Yellow Ribbon, also starring John Wayne. Some of America’s finest art, though we didn’t know it at the time. John Wayne: everything a man was supposed to be…tough, yet romantic …

Westerns were HUGE when I was a kid, and my immigrant grandfather, like lots of new Americans back then, watched all the TV Westerns (there were a ton of them in the 1950s and 1960s). They were entertainment, and they were a magical map of America, an amazing country they seldom experienced beyond their neighborhood. Rawhide, Bonanza, Big Valley, The Lone Ranger, Davy Crockett, The Rifleman, Maverick, Daniel Boone, The Wild Wild West, Jesse James … Some of these TV Westerns were made in the ’50s and were in reruns. No matter. Jadju rewatched them all in his stoic way, his heavy, creased faced serious … studying Maverick’s or Little Joe’s predicament… waiting for the inevitable gun fight, the show’s climax, the part where the hero always won … and the bad guys – Indians, Mexicans, the bears or mountain lions (everything our president Donald Trump reminds us we once loathed) – always died with fanfare, falling over cliffs, tumbling into the ravine, drowning in the roiling red river… kicking and raising the brown dirt or the desert sands or the clear cold waterfall as they met their maker. Kaput!

For Jadju, these TV shows were about America, a country that left him, after all his years of living in her, clueless. Still, he was fascinated! America, a beautiful country he left Poland for; the U.S.A., a country in which he planted all his dreams, a country he CHOSE to come to, sight unseen, as a teenager, with just a big wooden trunk filled with clothes, blankets and mementos on his back. A country that, in the end, used him up. His career? He slaved away in a textile mill in Douglas. His riches? He lived poverty-stricken in a congested tenement in the congested “Block” in Worcester’s congested Green Island neighborhood. He did marry the love of his life, the pretty, feisty Bapy, also a Polish immigrant. And he considered their five kids, one who died in childhood, to be their treasures. Jadju neither read nor spoke a word of English – he only understood his God, his Old World Catholicism, his wife and, half the time, (especially my mom, his fave) his kids. His perks during his seventies, his Golden Years? Me (I loved my gentle Jadju!) and sitting in our living room, peeling his fine, tracing-paper-thin cigarette wraps from a small cardboard container and lining them with tobacco to smoke. I remember watching him running the tissue paper and tobacco through his little metal machine, which “rolled” the cigs, making them ready for the smoke … all while watching his Westerns.

Sometimes during the stampeding horses scenes, just to make things more exciting, Jadju would let me clamber atop one of his ankles and he’d grab my little hands and raise his old foot up and down, up and down, and I’d pretend I was sailing on one of those galloping pinto ponies in the TV show!

Pop pop pop! went the blanks out of the Lone Ranger’s gun. I clapped my hands in delight. My grandfather squinted and studied the hero’s every hip swivel, every draw of the pistol. Jadju always dressed for the day – dark pants and a clean white dress shirt, collar crisp, buttons buttoned to the top except for the first button. … On our old back porch Jadju and I would sit together, he looking formal in his white shirt sitting in his wooden chair, me sitting on a long little wooden bench he had made for me (Jadu was no slouch when it came to carpentry) … Out of the dark gray wet modeling clay I patted gleefully, Jadju would mold a perfect little horsey for me. Then he’d take some more clay and pinch and mold a little saddle, then he’d make a kind of stick cowboy, and finally a cowboy hat with a big brim! Then he’d sit the clay cowboy on the clay saddle and place him on his dark clay pony and set the pony on the porch rail for me to admire. Then together we would recite a Polish prayer that ended like this: “And Jesus made the stones came tumbling down!” If I had made a little tower with my A B C blocks, he’d let me smash them down, and I’d recite the prayer again! We’d both laugh!

Jadju was an artsy craftsy guy… Here’s the tin cup he made himself. Almost like the ones in the cowboy movies, the tin cups from which the cowboys drank, while sitting around their blazing campfires: 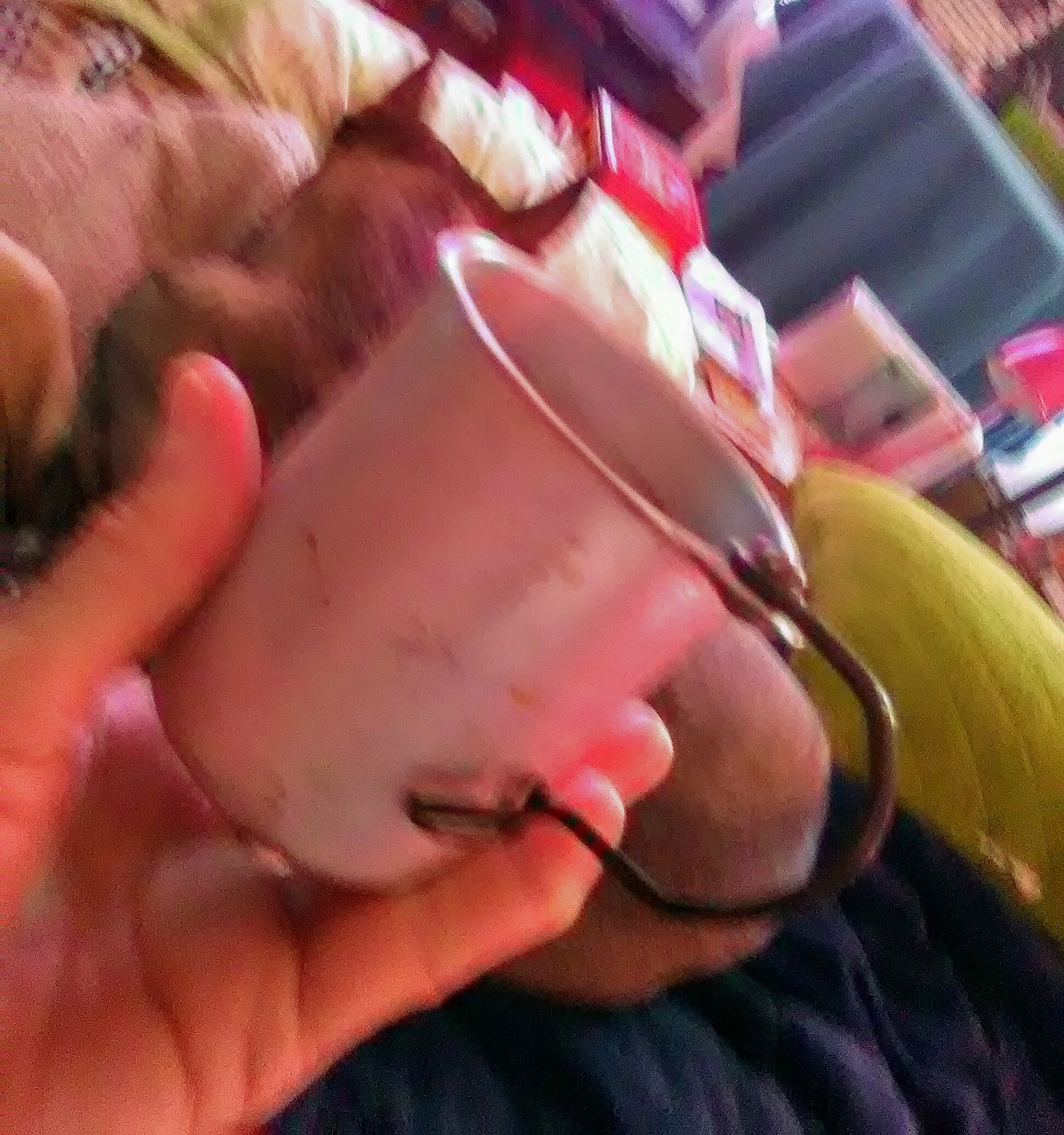 Here’s Jadju’s shaving cream mug, so precious 💙💙💙 to me! 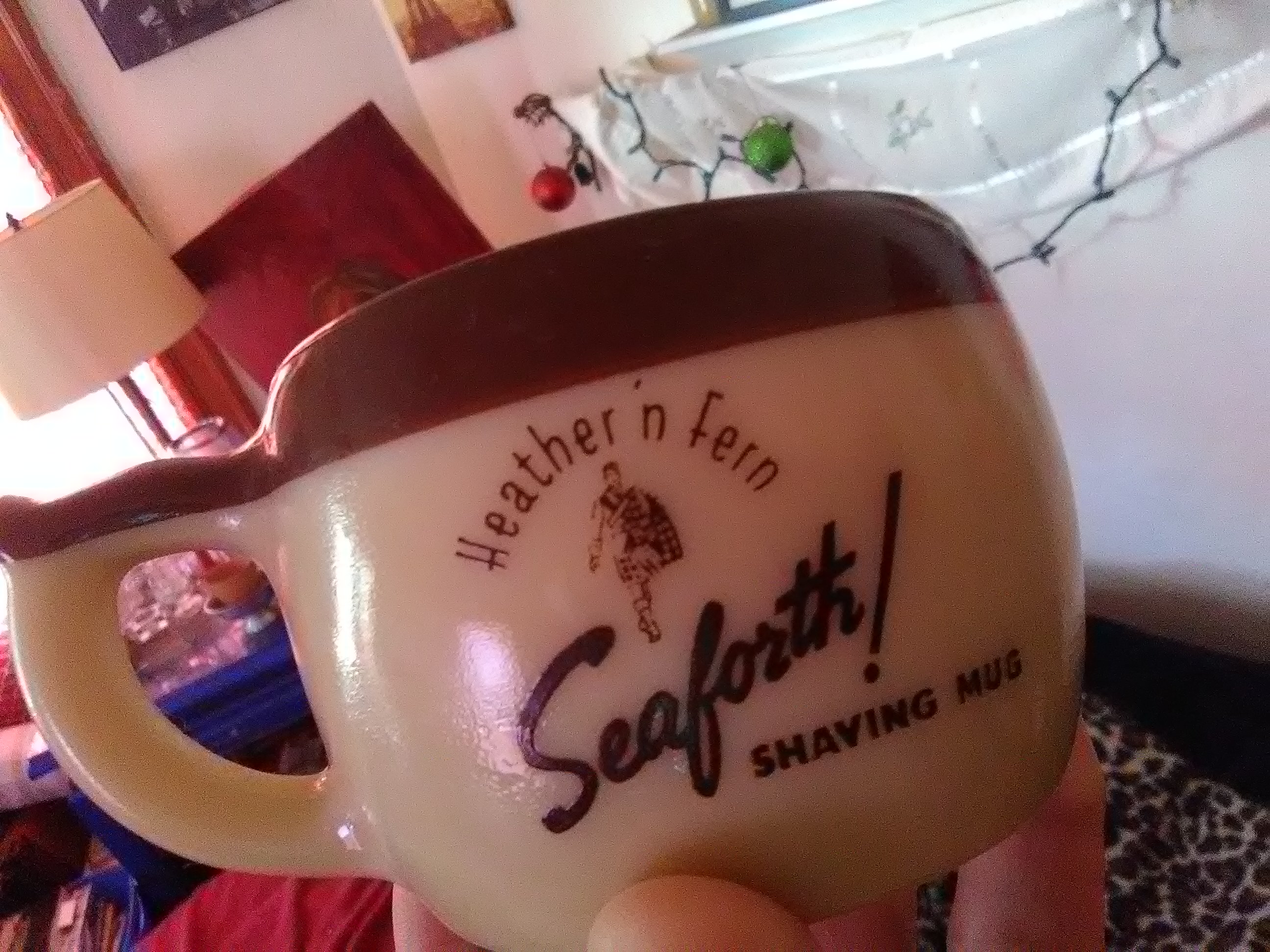 Jadju had the thick features of a Pole; his cowboy heros had classic American good looks for the era: Angular. Waspy. White. The strong, handsome, silent types. When I was growing up, the face on this CATLOW book cover – even three quarters hidden underneath a red bandana – was the American ideal. What kind of girl could NOT fall for that gorgeous, weather-beaten puss?! Beautiful killer. Rootless interloper riding his runty, but sturdy mustang, both of them only half-tamed, through the tall prairie grass, everything epic about flora and fauna. That was the way on TV: Grand Canyon, mesas, buffalos, two thousand to a herd, and when they roamed, the earth moved! Biblical! Exciting!

But here we were on Lafayette Street. This was America, too! 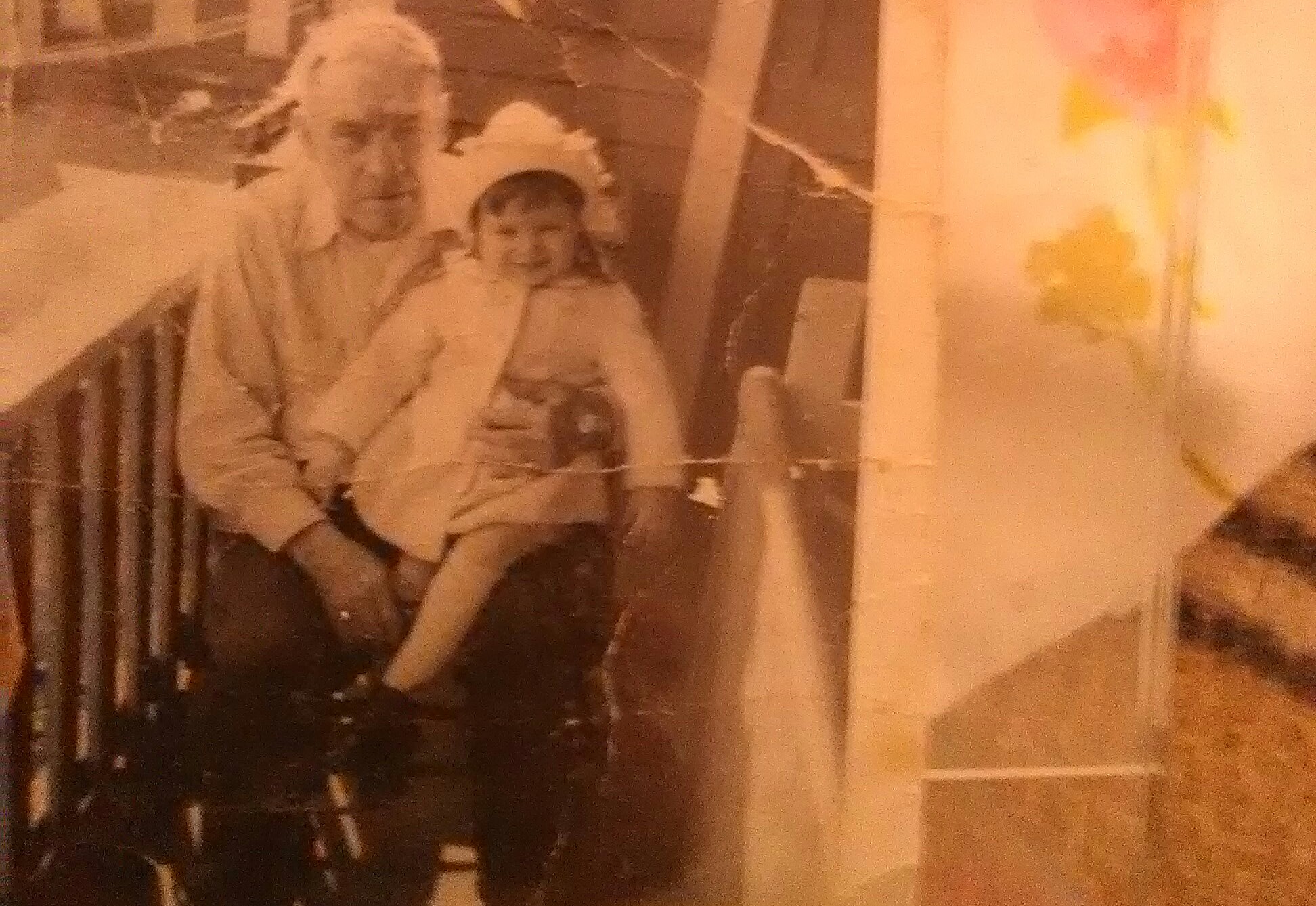 Jadju and his little buddy Rose on their Lafayette Street back porch.

But Jadju tried to turn it 100 years back! When he worked in the Douglas mill, on his time off, he’d go fishing with his friend, a Black guy, that my Bapy, when she first met him, feared. Jadju would have none of it! He told her, as they sat down together at the kitchen table: “Woman, cook the fish and bring us some beer!” My late mother always told me that story with a smile. Jadju, unlike his TV cowboys, wasn’t a racist; he was good, gentle… He loved the fields just a half-hour walk out of the neighborhood. When my mother was a little girl he would take her blue berry- or mushroom-picking. Together they’d pick berries, mushrooms and bring home “the stuffing” for Bapy’s pirogies. He raised and slaughtered rabbits on our back porch so Bapy could make rabbit stew, but the Worcester Board of Health shut the operation down. He loved nature; he DID have a horse in Poland. So did Bapy. Not for show and excitement though, for farm work.

I wish Jadju’s immigrant journey had happened earlier and had led him to the West, like the Swedes. He would have loved the wide open ranges, even if it meant killing himself with work to cultivate the land or build his house. He would have loved being in the middle of nature. He owned and played the harmonica. How lovely would it have been to hear him serenading a big country sunset? Instead, he got the Woo ghetto. But he wrung his own little private Colorado out of it. And there was always Gun Smoke, John Ford, Henry Fonda…the tumbleweed connection.