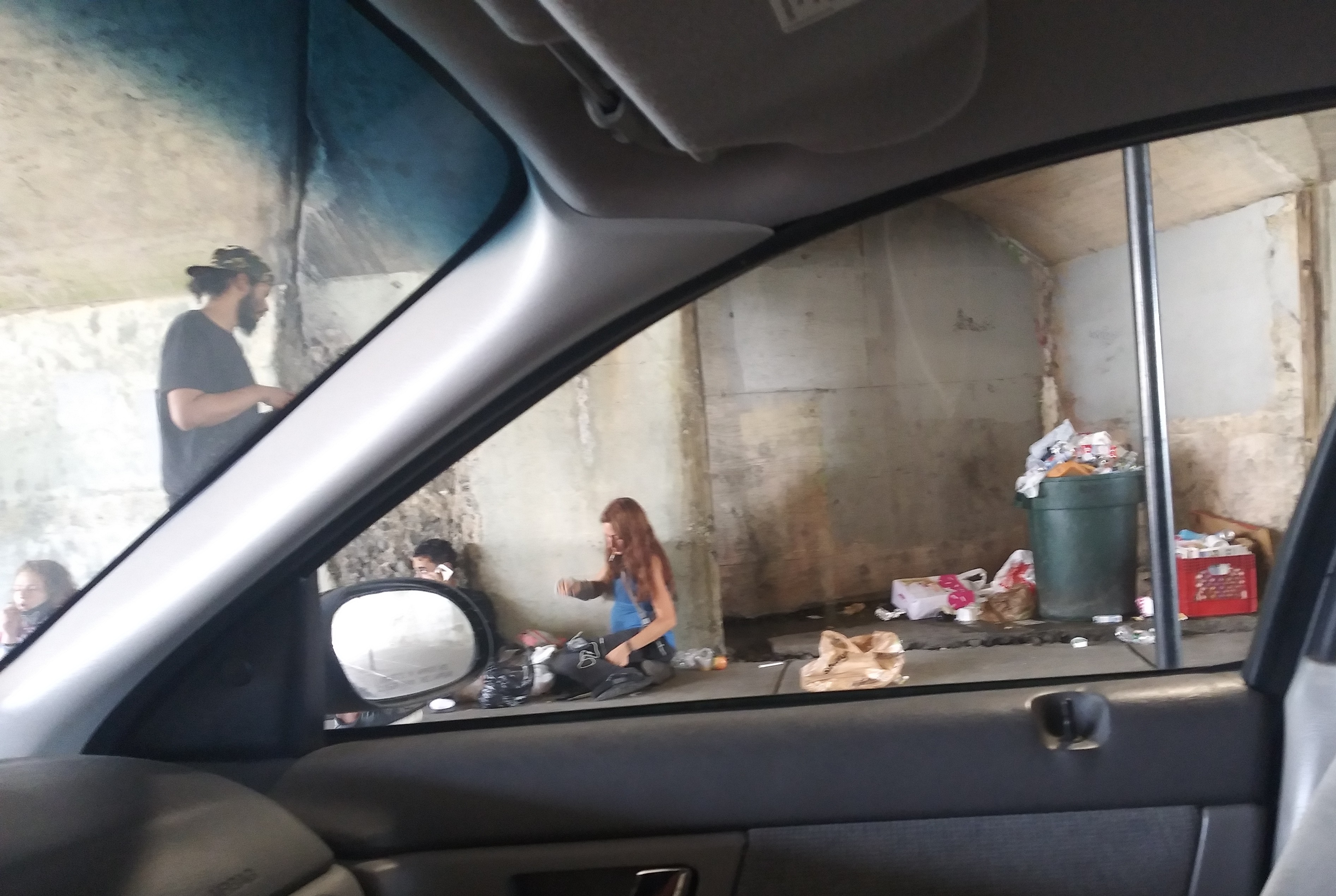 When I was a kid growing up in Green Island, we never saw this scene, walking under the Green Street Bridge, on our way downtown to Woolworths or the Mart: photo below – of a gaggle of young, attractive homeless YOUNG people. People in their 20s or 30s with their whole lives ahead of them – zonked out, high, sprawled out before garbage pails overflowing with refuse. In the chi chi Canal District a 2-minute walk from the gourmet cupcake shop and organic makeup vendor and doggie speciality shoppe. …

On Lafayette Street, when I was a little girl, we had a few homeless people in the neighborhood, but they were usually guys – older guys, hardcore alcoholics suffering … from aloneness, hunger, DTs. They were, heartlessly, called bums or winos back then. No one talked about addiction or mental health or physical health problems. These guys were considered weak, “losers” – failures at life. No one expected them to ever get a job, get married and live with a wife in a home or even sober up, stop drinking. Lafayette Street, especially Millbury Street towards the Crompton Park side, was lined with crumby dank uriney smelling bars where these guys drank and drank for cheap and then stumbled to Hotel Vernon or some other Millbury Street flophouse to sleep it all off. As a teen, I once counted 24 stinking hole in the wall barrooms on Millbury Street. So Worcester’s Canal District was once Worcester’s Skid Row! … You saw the “bums” walking to school or catechism class at St. Mary’s

… There they were, sleeping it off, hunched over, disheveled and smelly in various and sundry Millbury Street doorways. The guys could be a little scary when they were awake – rush up to a little kid to demand a quarter. Many a day my kid sisters and I RAN past those Millbury Street bars on the way to visit our mom at work at the cleaners or grab a hamburger at Messiers Diner after school. The bums didn’t stop us from enjoying the real pleasures of Green Island – we just had to run down Millbury Street to get to them!

I suppose, despite the phony political correctness nowadays and new Canal District moniker and dreadful gentrifier Allen Fletcher STILL squatting on our Ash Street – THINGS HAVE GOTTEN WORSE IN MY OLD NEIGHBORHOOD. Instead of just a handful of winos sprawled out on the Canal District streets, there are a ton of heroin-addicted, glue sniffing YOUNG PEOPLE there! Street kids who have no flophouses to give them shelter from the storm – or a place to temporarily sober up. … Nope. Worcester is TEEMING with alcohol- and drug-addicted YOUNG PEOPLE – you see them by the train tracks outside the new Blackstone Visitors Center, a stone’s throw from Holy Cross College. You see them on Cambridge Street, Webster Square, Vernon Hill. Backpacks on tight, maybe walking with another pal from the streets. With the pandemic forcing many of us to curtail our activities, some days, driving around Worcester, that’s all I see is homeless people! Some days I will see MORE HOMELESS PEOPLE THAN average Woo working peeps. It is heartbreaking. It is bleak. It is the New Woo Normal. Encampments in our woodsier city parks or green nooks. Right before the last storm, I saw a guy, in his 30s, over stuffed backpack on back, casually walking into the woods on Greenwood Street – going home, to shelter in maybe the tent he set up.

WHY DO WE AS A CITY ALLOW THIS? WHY CAN’T WE HELP? GIVE THESE YOUNG PEOPLE SAFE, CLEAN, DRY PLACES TO SHELTER …or just to sleep it off? 50 years ago flophouses served a purpose, as did SROs, as did the PIP: to keep the lowliest among us from suffering in the gutter. Dying in filth. To GIVE ALL AN AFFORDABLE HOME. We have lost our way as a society. Our Worcester city councilors and city managers leading the march to NO EMPATHY LAND. We thought by eradicating these cheap cots/hots we would eradicate addiction, human pain, hopelessness from our city. But there is no limit to human suffering, and when the Red Sox AAA stadium is built the homeless kids under the Green Street Bridge will be pushed out … to a new Worcester bridge or underpass, with their used works, beat up cell phones and overflowing shopping wagons in tow.