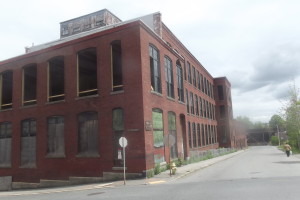 A couple of days before Christmas of 2011, Brady Sullivan Properties, a real estate development company out of Manchester, New Hampshire plunked down $1.1 Million dollars to purchase the long vacant and derelict factory complex that dominates the skyline on Beacon Street here in the City of Worcester.

The buildings had gone to seed, the roofs were leaking, the windows were broken, the pipes had frozen and burst, in short, the place was one step away from the wrecking ball when it was sold to a developer that wanted to reclaim this Worcester landmark and turn it into market rate apartments.
Other people over the years that it lay dormant had envisioned turning the place around, and giving it a renewed lease on usability to bring it into the future along with our fair city, which is the 2nd largest in the entire New England area.

Worcester was long noted as a manufacturing hub, and it was because of that capacity to produce goods that Worcester attracted the many different types of immigrants who came to our city looking for a better way of life than that they had known wherever it was they came from. People from all over the world have chosen to make Worcester, Massachusetts their home, primarily for the opportunities for advancement that this city offered for them.

That was especially true when I was growing up and Worcester still had many factories producing goods that were shipped out of Worcester to the various places around the globe where they were needed. You could find a job here in the city without even trying hard.

Brown Shoe on Hammond Street was a major source of Worcester pride in quality manufacturing, there was Chess King right on the same street, Hammond Street that made all sorts of apparel for sale in shops here in the city and elsewhere, there was Thom McCann out on Millbrook Street, another shoe manufacturer. There was Worcester Knitting Company on Brussels Street near where Rotman’s Furniture is today, they made knit goods like sweaters and polo shirts for sale all over the world. I worked there in the early 1980’s myself as an assistant building maintenance man, and night watchman.

Thanks to Mr. Shane Brady, CEO of Brady & Sullivan Properties and his frequent visits to his daughter when she was enrolled in out prestigious Clark University in Main South, the Junction Mill Shops Project got underway, and is making good progress towards reuse of long abandoned and vacant manufacturing space. Turning an eyesore into something that Worcester will be proud to have fully functional and in use once again.

There are going to be over 100 apartments in the complex. That is 100 plus families that will come to Worcester to settle here in our great melting pot of a city, looking for a better life for them and their children. Worcester has one of the finest public education programs in the country as witnessed by the recent visit of our President Barack Obama to honor students from Worcester Technical High School. I have long said that Worcester has one of the finest public school systems to be found anywhere in the country, and that visit by the President bears out my assertion.

The Junction Mill Shops Project is underway, there is a completion date sometime in the near future, I was unable to have the management contact me to get the specifics of the anticipated completion date, or the exact number of rental units there will be in the finished product, but anything that helps to transform that area from a vacant expanse of derelict buildings into modern homes for families has to be a positive for the City of Worcester.

The recent crackdown I initiated in the 700 Block of Main Street with increased enforcement against the drug dealers that frequent this neighborhood is also a step in the right direction and I thank the Worcester Police for taking my complaints seriously and acting to curb illegal activity that was a constant disturbance for my tenants here on Main Street during the nocturnal hours of each and every night.

Congratulations are in order for Mr. Shane Brady, the CEO of Brady & Sullivan Properties for saving those old mill buildings and making them thrive once again.